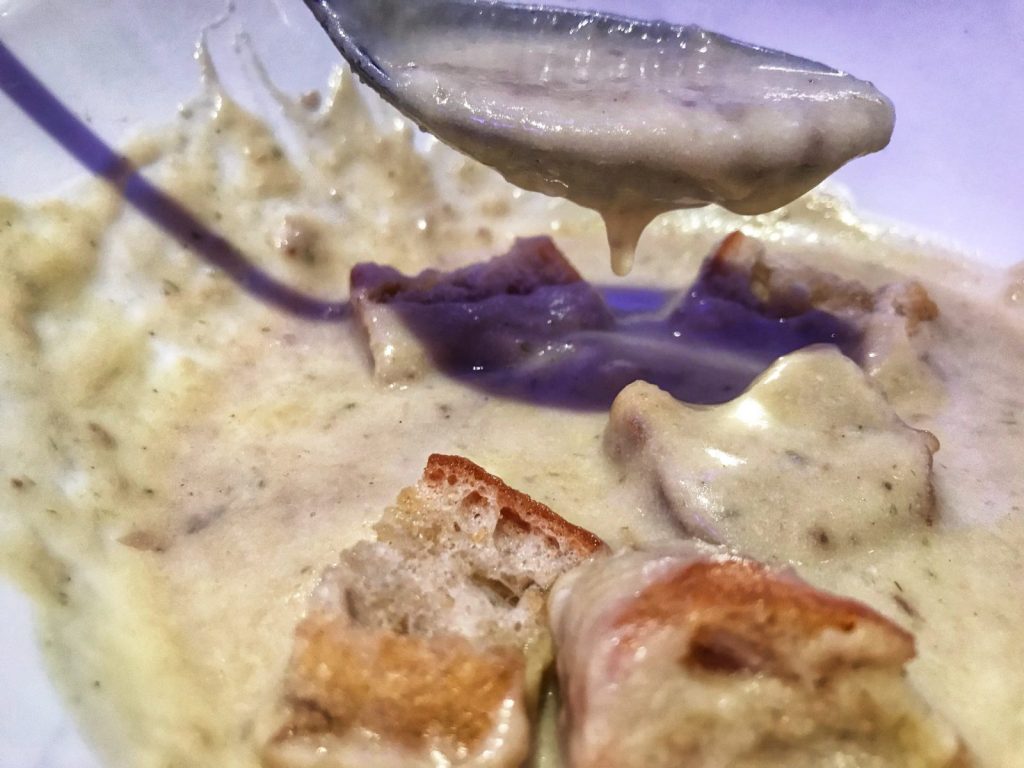 Choked with the cold, in bad humour and dressed like a 90’s snowman, I couldn’t think of anything worse than going out for dinner. And this wasn’t just any dinner. This was our “traditional romantic Christmas dinner” at HMT’s 1906 restaurant. This usually means I have to look doe-eyed and wear a nice bra. Not this time. All I wanted to do was cancel dinner, lie under 3 duvets and spoon the dog. And I felt this way until our starters arrived. I think the soup cured me by at least 3%. Potato, chive, onion and brie soup with parmesan croutons. And as Aye 2.0 said, “those are all of your favourite things!” Because he was decking the halls with bows of jolly whilst I was the Grinch. 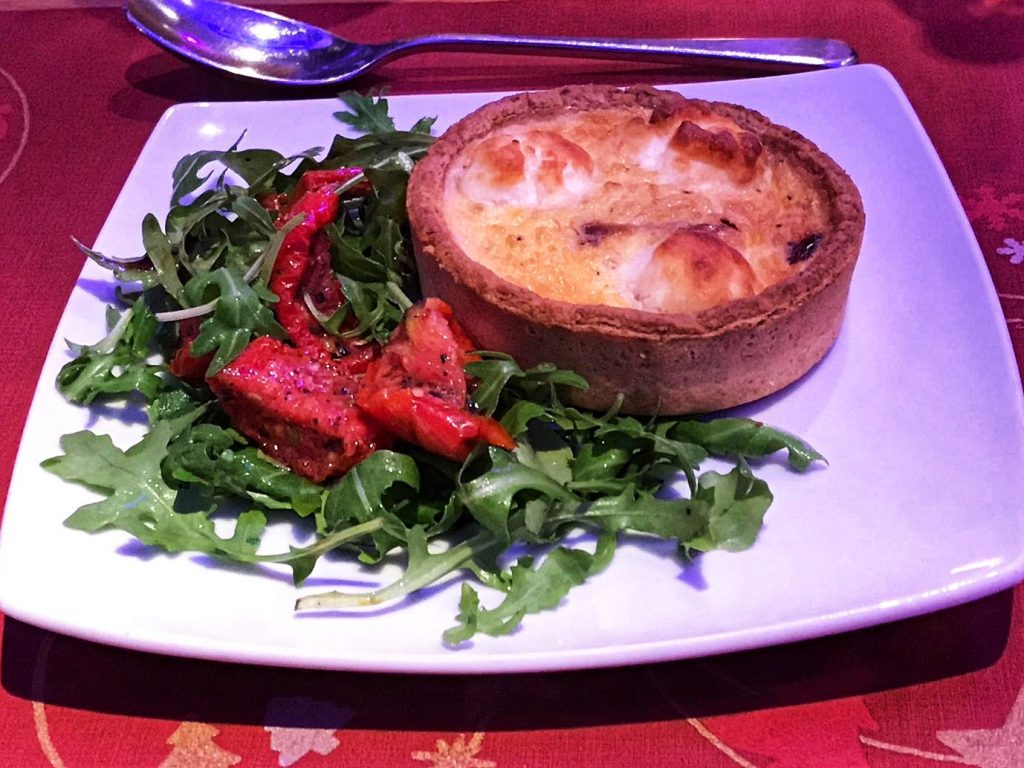 The King had the goats cheese and red onion tart which was absolutely disgusting if you don’t like goats cheese. If you are, however, partial to goats cheese, this wee tart will be right up your dairy.

Deck the halls with bows of sea bass 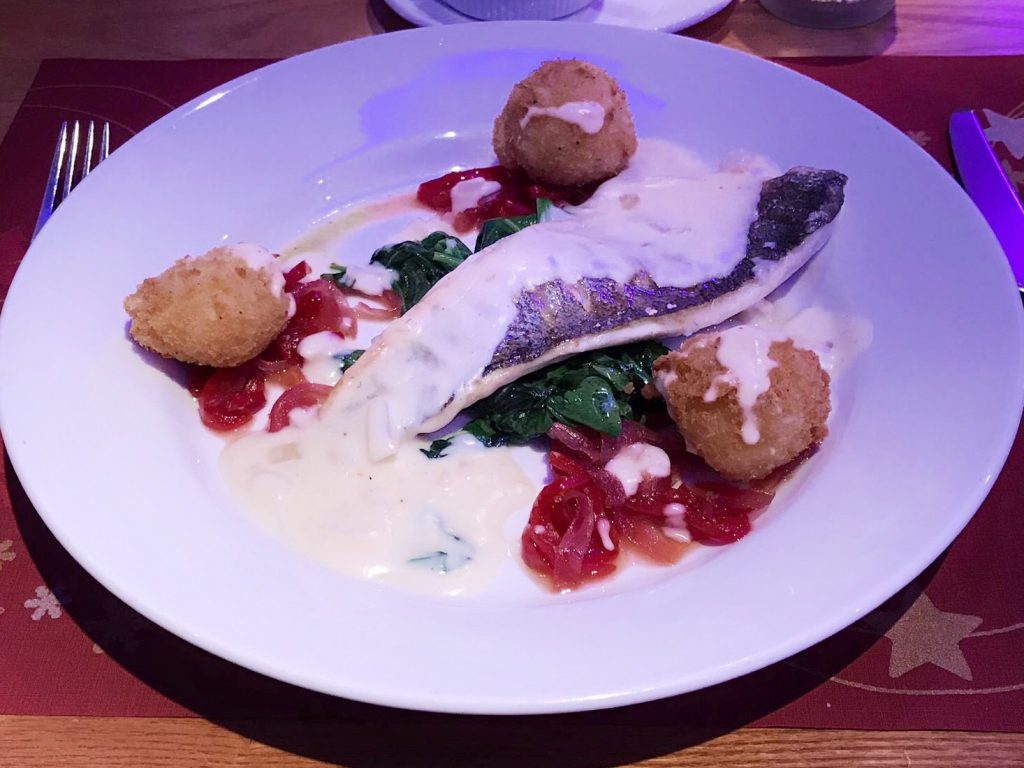 Aye 2.0 loves fish. It’s kind of ridiculous. He can’t go to any restaurant without ordering fish. He is literally daddy shark. And that’s if he ain’t eating daddy shark. His sea bass came with potato bonbons, a red pepper relish and a lemon and coconut sauce which he was rather enamoured with. It was presented beautifully and as someone who is a big fan of sea bass, I ordered turkey. 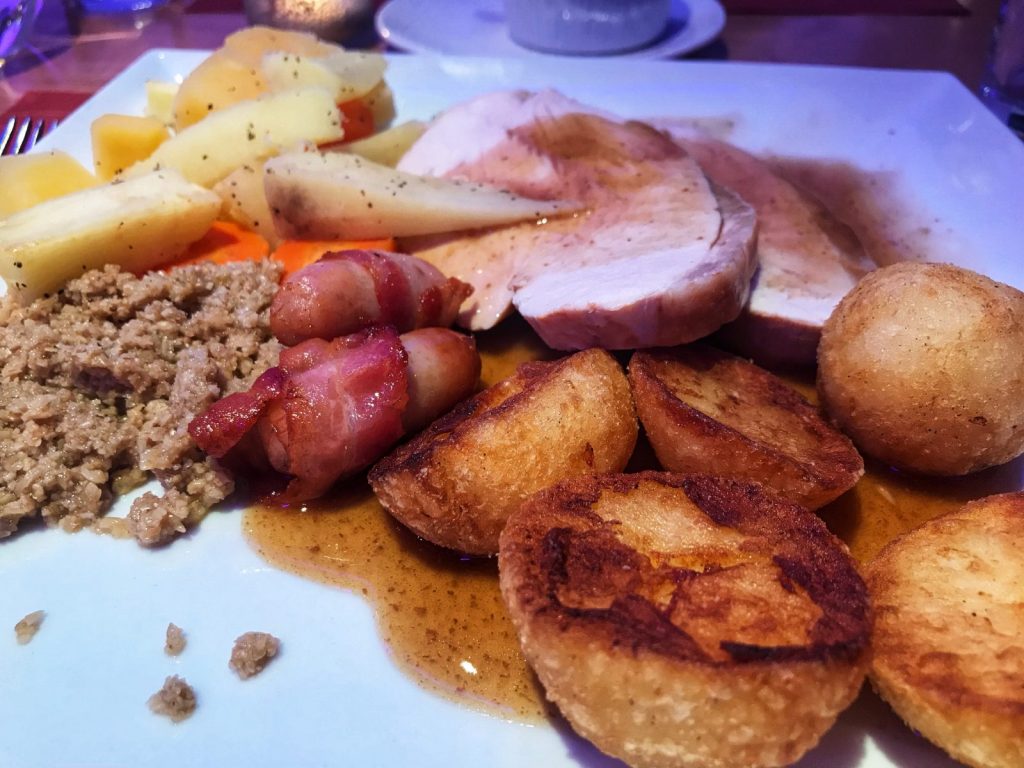 Because when you ain’t feeling 52%, the last thing you need is something a wee bit wacky. And if there was anything that was going to ramp up my Christmas cheer, it was a pig in a blanket. But I got so much more than this. Tender turkey, crispy roast potatoes, my first cranberry sauce of the season and a sexy, salty gravy. 9/10 on the turkey effort at the 1906 restaurant. Although the only problem with eating great turkey 4 weeks before Christmas is knowing that your turkey will be utter crap in comparison.

Is chocolate a calorie? 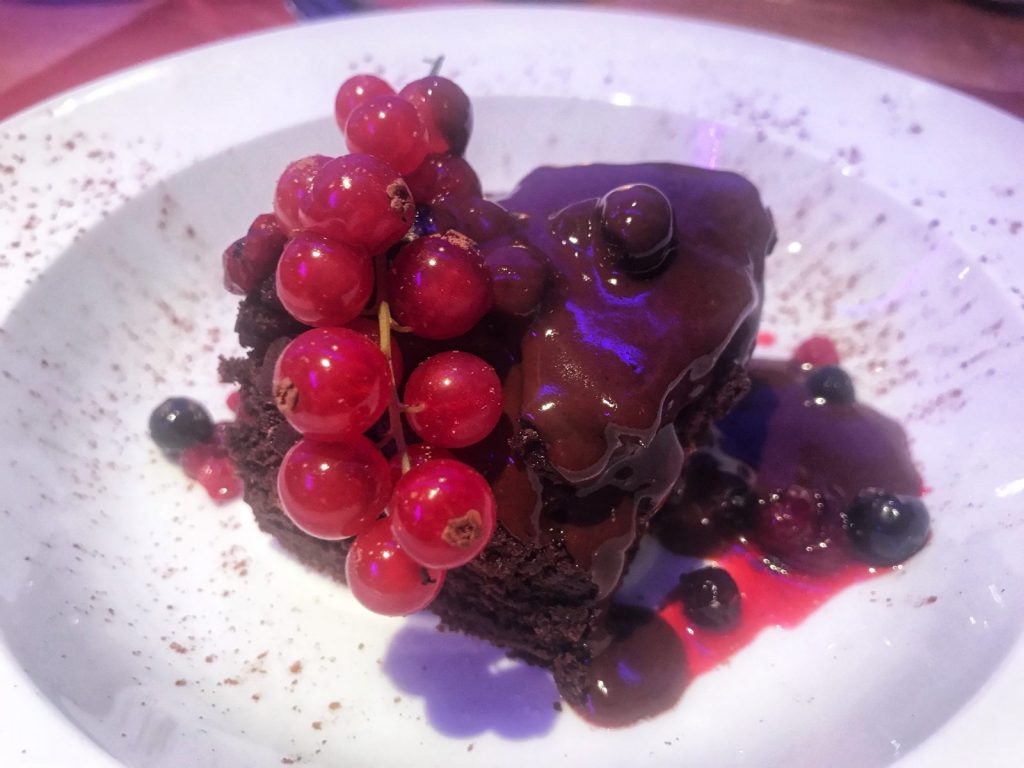 Like I was giving a single duck?! So much chocolate, wrapped in chocolate and drizzled in, well, chocolate. FYI, when you’re “actually dying,” melted chocolate is the equivalent of clean sheets on a fat duvet. Officially my dessert was a chocolate brownie with chocolate sauce and berry compote. But I call it “Alottachocolate.”

The man’s dessert was a selection of ice-creams with shortbread and cinnamon. Rum and raisin and honeycomb ice-cream. I stole some of the honeycomb to go alongside my hot brownie. It might just be me, but I am a woman obsessed with hot cake and ice-cream. And this chocco brownie with honeycomb ice-cream, yes.

We have been going to the 1906 restaurant at His Majesty’s Theatre for 5 years running. And we have never once been disappointed by the Festive menu. And this is the first year I’ve gone for our “traditional romantic Christmas dinner” with the typical “it’s going around” cold. I kinda have to hand it to 1906 for friendly service and great scran, but I’ve got to thank them more for making me the best possible soup during soup-gate. To see the Festive menu, click here.