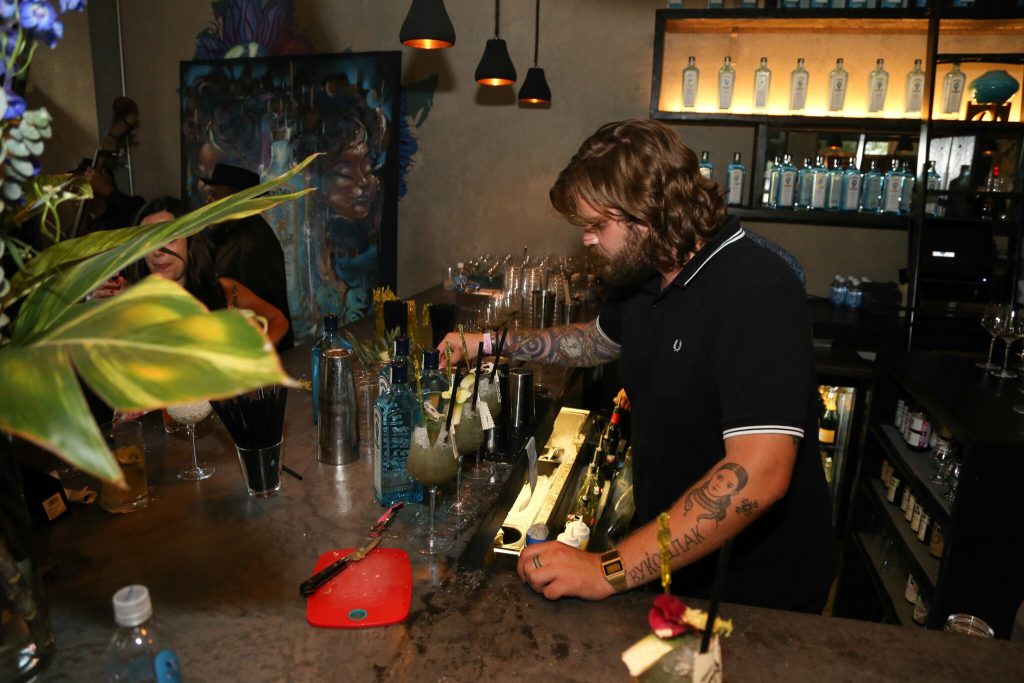 Every year, Bombay Sapphire and the United States Bartenders Guild team up to offer the most creative and ambitious of bartenders in North America a gincredible opportunity to further their careers. This level of diversity and appreciation for the industries future thinkers shows dedication to the strengthening of the brand. The Bombay Sapphire Celebratory Spirited Dinner was held at Maypop Restaurant in New Orleans’ South Market District. 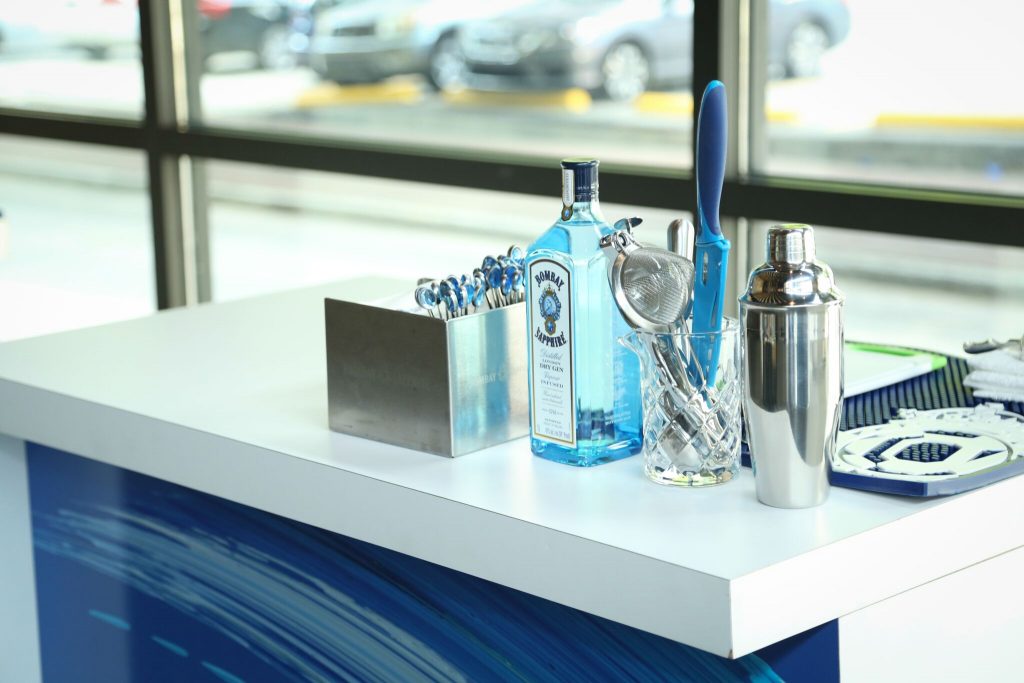 Each year there is a different theme to the contest and all rules are void. Competitors are requested to recreate an original drink, adding their own personal spin. The whole drink can be completely re-imagined, making use of various garnishes and classy glassy-ware. There are 10 botanicals in Bombay Sapphire which come from all over the world.

The 10 Botanicals within Bombay Sapphire

Meeting Stephanie, my ‘over the water’ PR contact was a breath of fresh air, a fellow Tales newbie, with enthusiasm to die for who soon made sure we were welcomed, canapé’d and sent towards the cocktails. Waiters with stylish smiles served frozen French 75’s encompassed in glass artistry. These were received particularly well following another oven-like day in Louisiana. 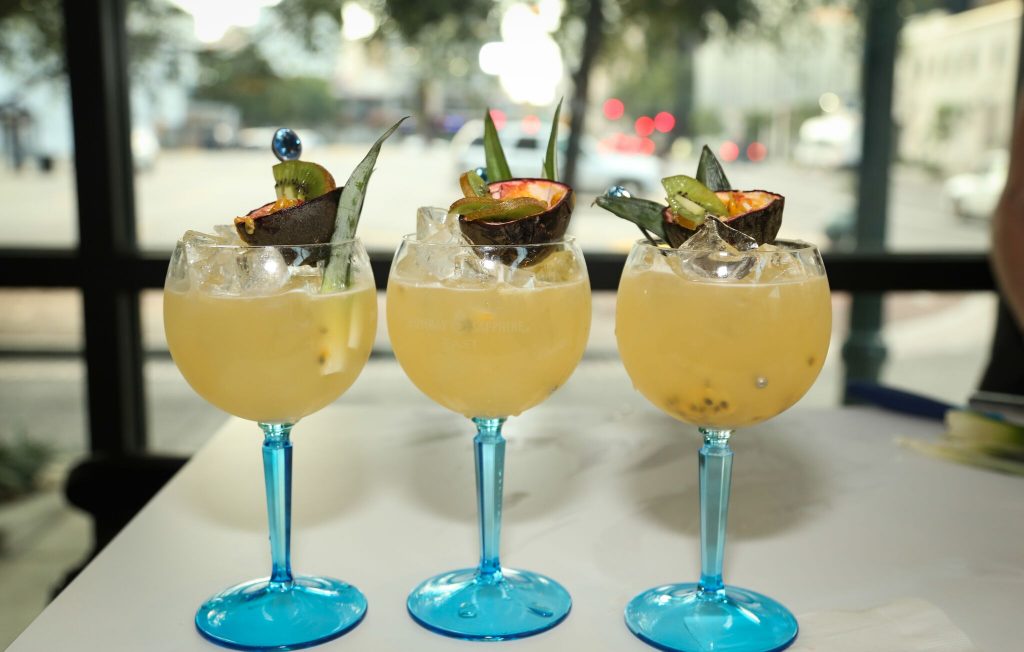 Bombay Sapphire had the Thursday evening cocktails nailed with a range of Martinis, Negronis and the classic G&T. The bartender at arms presented me with a dazzling Moscow Mule, replacing ginger beer with ginger syrup. The air of anticipation of the evenings celebrations were increasing while attendees and finalists began to pull up their pews. 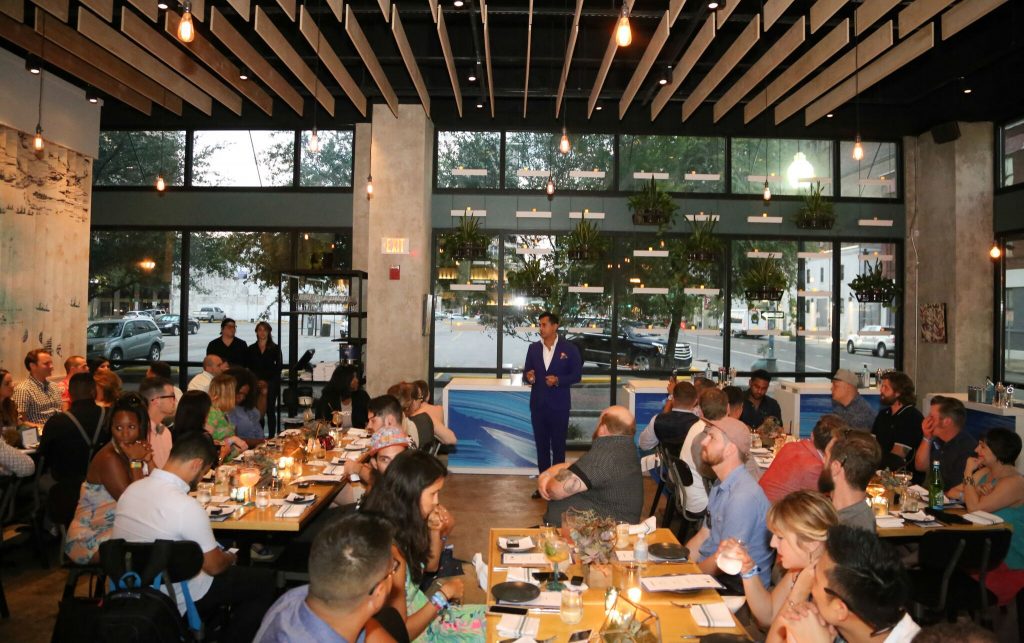 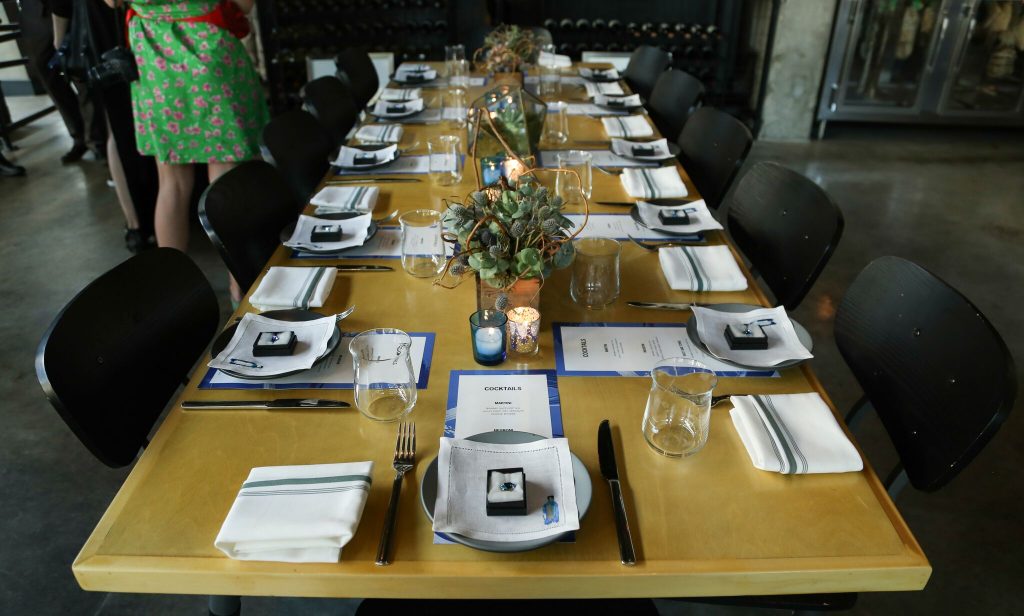 Michael Gulotta is the ‘master chef’ behind the menu at Maypop Restaurant, located in downtowns’ South Market District. With an already very successful restaurant, ‘MoPho’ in New Orleans’ City Park, Maypop is a relatively new endeavour. While MoPho exhibits a strong Vietnamese flair, Maypop focuses more distinctively on a mix of both South East Asian and Southern American influences. Gulotta, the winner of Food & Drink 2016’s Best New Chef is one to watch with his unique complexity of flavours and eloquent dining alternatives. 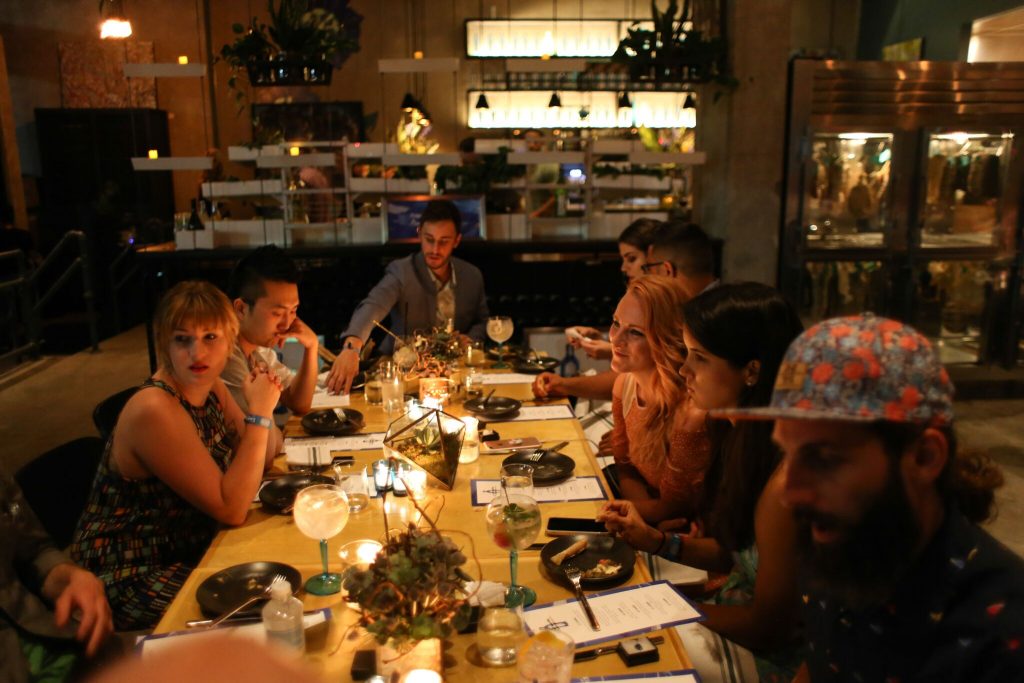 Shortly after taking our seats, we became acquainted with our fellow diners. Joining us at our table was Andrew Martin, a freelance cocktail and coolinary writer. I have to single-handedly thank Andrew for getting me through the majority of our courses with his gentlemanly manners and keen knowledge.

Another rather spiffing fellow dining with us was Mr Mark Wiseberg, originally from Manchester but now living in L.A. He is a part owner of Road Soda, a unique mobile bar on wheels which travels all over the U.S. creating craft cocktails to please the crowds. He was an intriguing gent with an accent that brought me closer to home despite the 4,000 mile and 6 hour time difference.

We were both very grateful for the company at our table as the culinary delights in New Orleans were still a little alien to us. Everyone made us feel welcome and shared a laugh, a story and a wealth of New Orleans tips.

Par for the Course 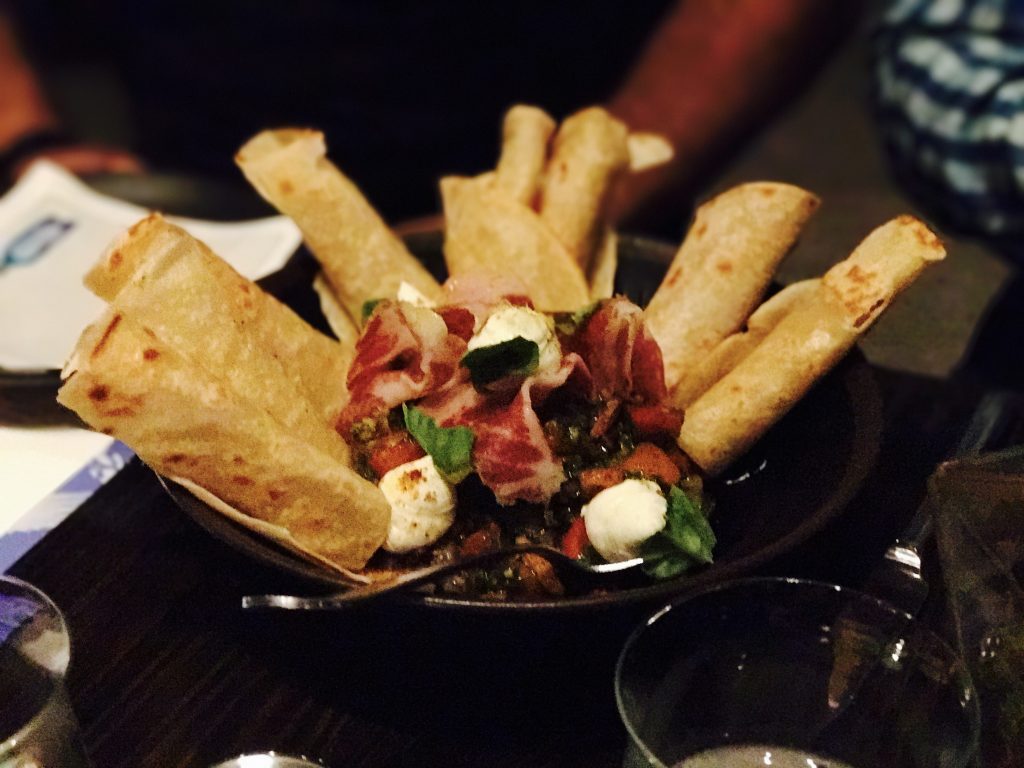 Each course arrived at the table looking more complex and curious than the former. We had many questions, which became increasingly easier to query as the Martinis pursued. It wasn’t long before we had the whole table questioning our Scottish background and native culinary delights. We watched the courses arrive and amongst smashed eggplant and squid ink soaked fusilli, came the show stopping main event, a whole, fried red snapper. 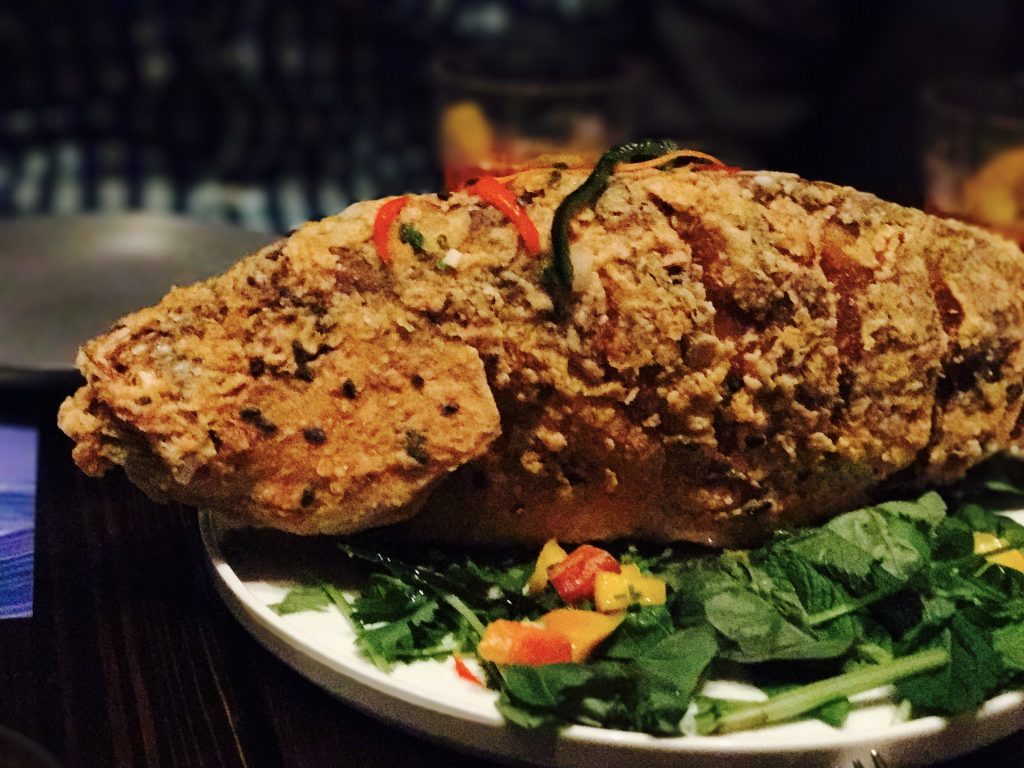 By this point, I had figured out that a snapper was a fish but I still felt that Toto and I had not long left Kansas. Usually a fish, fried or otherwise, is served lying flat as it would be on the day it leaves for fish heaven. I turned to face Mark not realising that the next course had arrived and instead of taking in Marks bemused grin, I was faced with the crispy grimace of Susie the snapper. Truly an amusing moment! Little did I know that the snapper was going to make an appearance standing (do fish stand?) on her belly. Seeing as I don’t have much experience of dealing with standing snappers, Josh was more than willing to cut me a portion whilst sharing his enviable knowledge.

I’ll drink to that 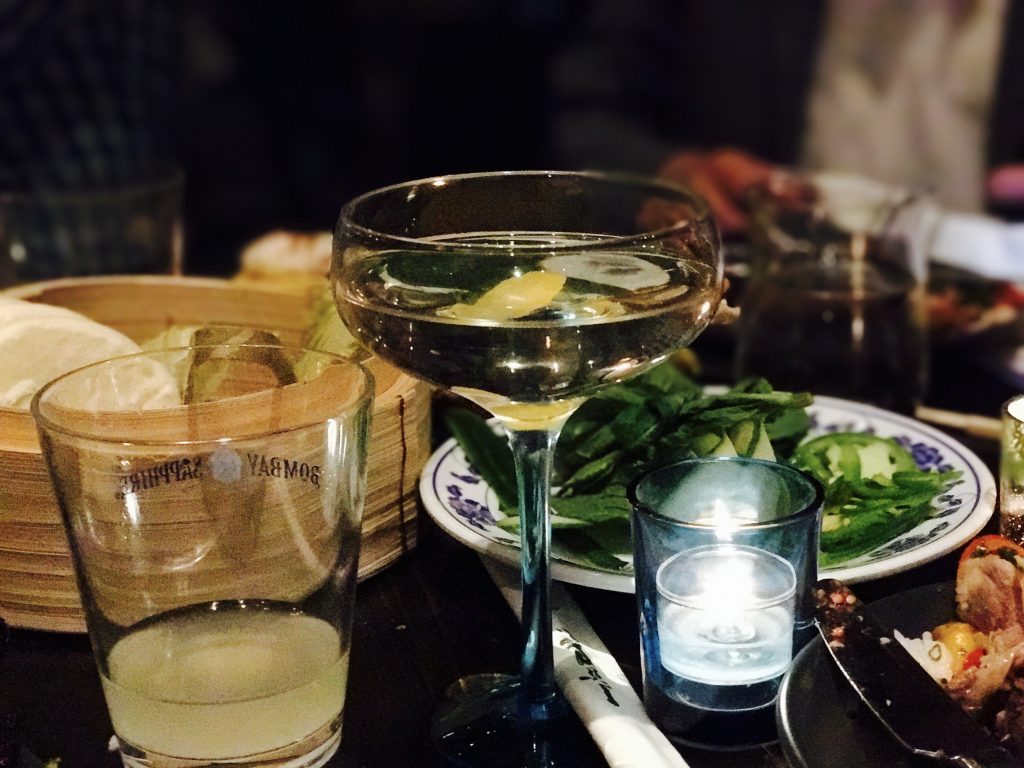 Martini merriness filled the room whilst the attendees and finalists picked at their dishes. The atmosphere in Maypop was relaxed yet energetic. Between courses, various cocktail connoisseurs shared their story and wished the best of luck to this years finalists. This resulted in cheers for years. We enjoyed every moment of the Bombay Sapphire Spirited Dinner and I will wear my Sapphire pin whenever I whisk up an all-mighty G&T. The finals take part between the 21st and the 25th of August in England and we personally wish all of the finalists the best of luck with their future endeavours!

Spirited Dinners are very popular during Tales of the Cocktail with each brand boasting an evening of lip licking cocktails and tasty, local food. As we were attending Tales as media, we had access to a variety of tasting rooms and seminars. We also had some great PR contacts at our disposal. A huge thank you to Stephanie who invited us along to the dinner to take part in the Bombay Sapphire celebrations. We can’t wait to catch up with you at Tales next year!