A rather endearing gentlemen and a cool mule led us way off par the evening before. We looked like zombies and our banter wasn’t much better. Thankfully, we were booked on to a City Bus Tour at 3pm, giving us plenty of time to sleep, eat (oysters) and retreat. We had been in New Orleans for a week and a half and we still hadn’t seen a large proportion of the city. Tales of the Cocktail kept us within hotels and bars, mostly out of the killer rays. We were raring to go on our date with Butch the driver and the sun dance bus.

Are you a Cajun who eats Cajun? 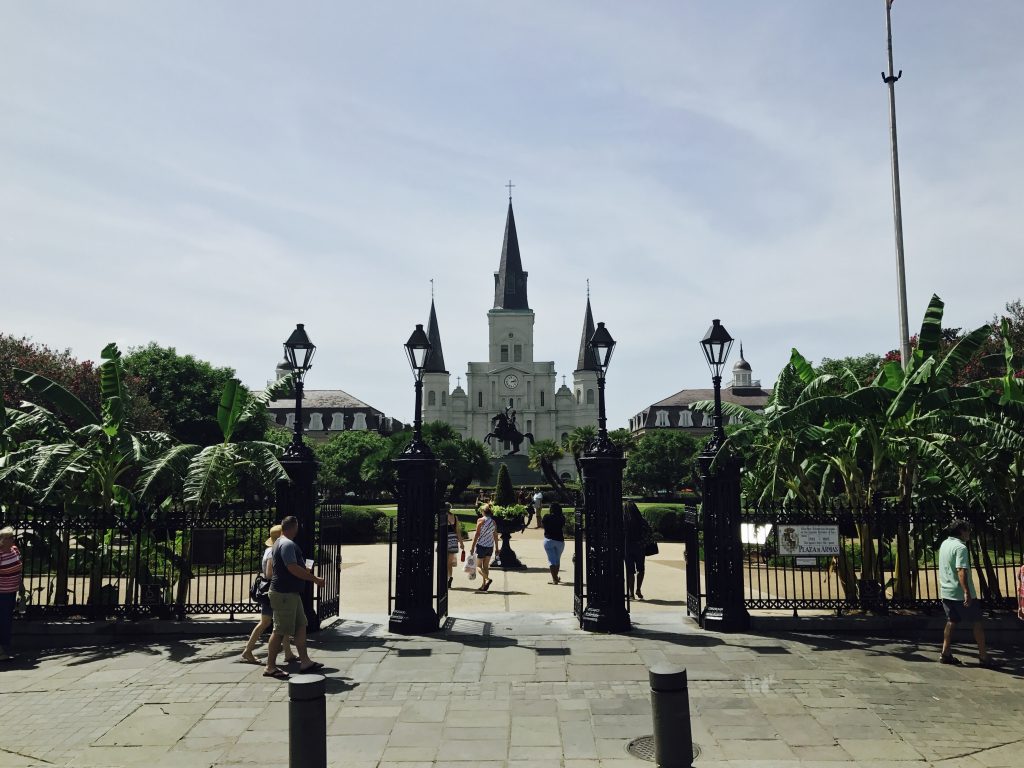 I’m always one to pick up on the mind blowing facts so I hope you’re sitting down. New Orleans is a stew within a melting pot, bubbling away with a whole range of ingredients. Similar to when Scott offers to make soup. I give him the list of ingredients and he decides to throw in extras like cinnamon and bananas. Then doesn’t understand why I won’t eat it. Except in New Orleans, every extra ingredient has contributed to the local flavour and diversity. I didn’t just eat it, I bathed in it, What?!

‘Cajun’ took its name from the Acadians who had great great grandfathers who were French. So instead of French-Canadians, they were French-Acadians. Over time, people got slang-y and turned Acadians in to ‘Cajuns.’ Some say it has to do with the different accents but I think it was to do with confusion, tongue-twisting and a little touch of assumption. A little like when people automatically call me Vicky when my name is clearly Victoria. The Cajuns make up a large proportion of Louisiana and have heavily influenced the culture, making them a top Nola culture vulture.

If you’re heading down to Louisiana town, then you need to know yourself the facts. Firstly Louisiana is not a town, it is a state, I just like rhyming banter. Secondly, every second thing in New Orleans has Creole in its name. It’s hard to figure out whether Creole is a local dish, a boat or even a location.

This won’t be long winded, promise. So in the 1720’s, the word Creole meant ‘born in Louisiana.’ Then around 1750, the white Spanish and French children were also getting called Creole. This was to try and distinguish themselves from the Americans who had moved to the up and coming state. In the 1800’s, the mixed race people started calling themselves Creole. Ever since then, like Jacko said, it doesn’t matter if you’re black or white, or purple or even, turquoise. If you were born in New Orleans, you could pretty much make a Creole claim. Although Cajuns, see above, were not Creoles. Just like how I’m Scottish but could also be called British, or ‘wit-ish.’ No? 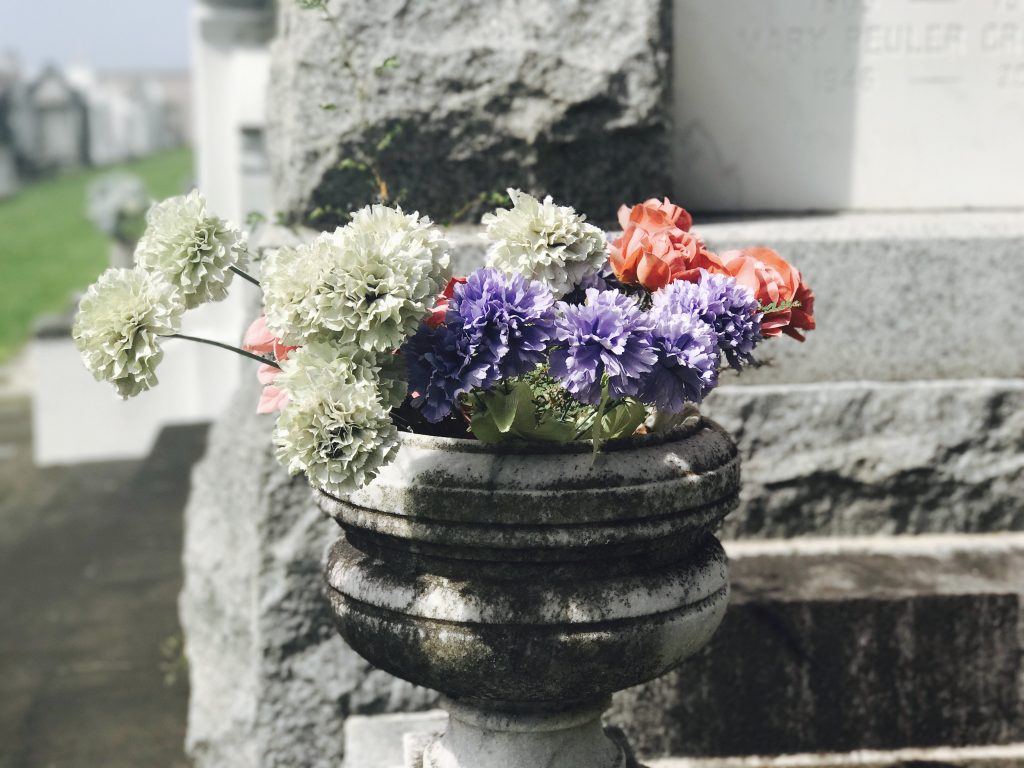 Included in our tour was a stop at St Louis Cemetery, also known as the City of the Dead. This is the first cemetery I have ever visited where the bodies are above ground. But don’t worry, they aren’t just sprawled out, taking in the sun and catching a tan. As that would be rotten and literally terrifying. Instead, they have their own above ground tombs. Some of these tombs were literally castles. What I have taken from this is when the world has to say its final goodbye to the legend that is me, I want a marble palace as I likely will not own one in life. 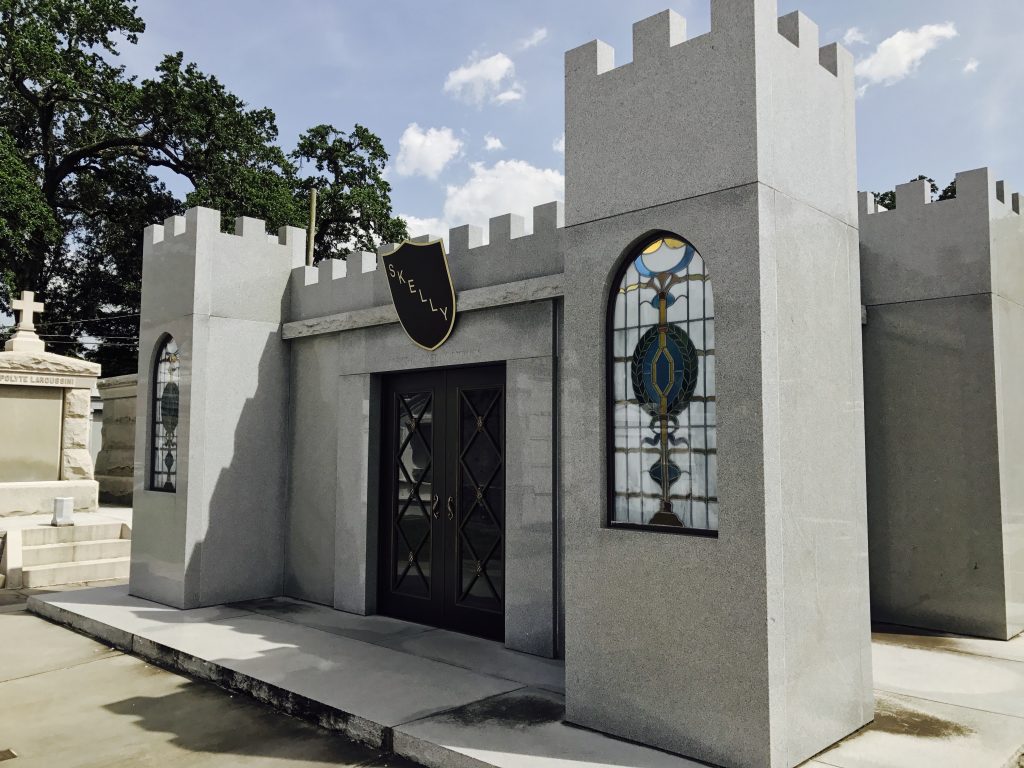 Butch shared that when the city had its bout of yellow fever, some poor buggers were accidentally buried alive. When the city started to realise that these poor sods hadn’t actually kicked the bucket, they needed to take action. Bells were put in to the coffins to alert workers to the undead. This also contributed to the following, also known as… 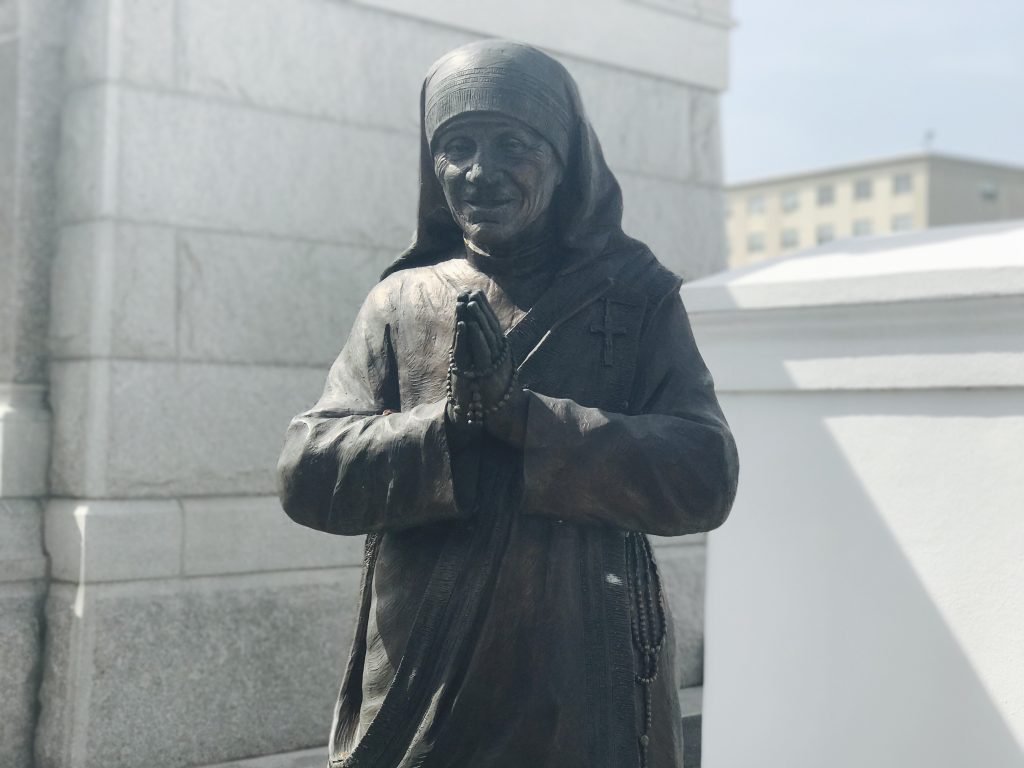 The Garden District is a very famous neighbourhood, literally. Celebrities with houses in the area include Sandra Bullock (forever a heroine), Beyonce (Queen B) and Brad Pitt (Not bad on the eyes). It isn’t difficult to see why anyone would want a house in the Garden District. The architecture is phenomenal, with many houses offering a Gothic, Victorian feel. Some of the homes reminded me of the gingerbread house in the fairytale with white icing like features. I would scoff the lot.

Another interesting feature of some of the houses was the sky blue paint on the patio roofs. Back in the day, New Orleans Voodoo preachers said painting your patio roof blue would ward off bad spirits. It actually helped, kind of… The sky blue paint reminded the local bird-life of the sky and in turn, prevented them from nesting beside front doors. 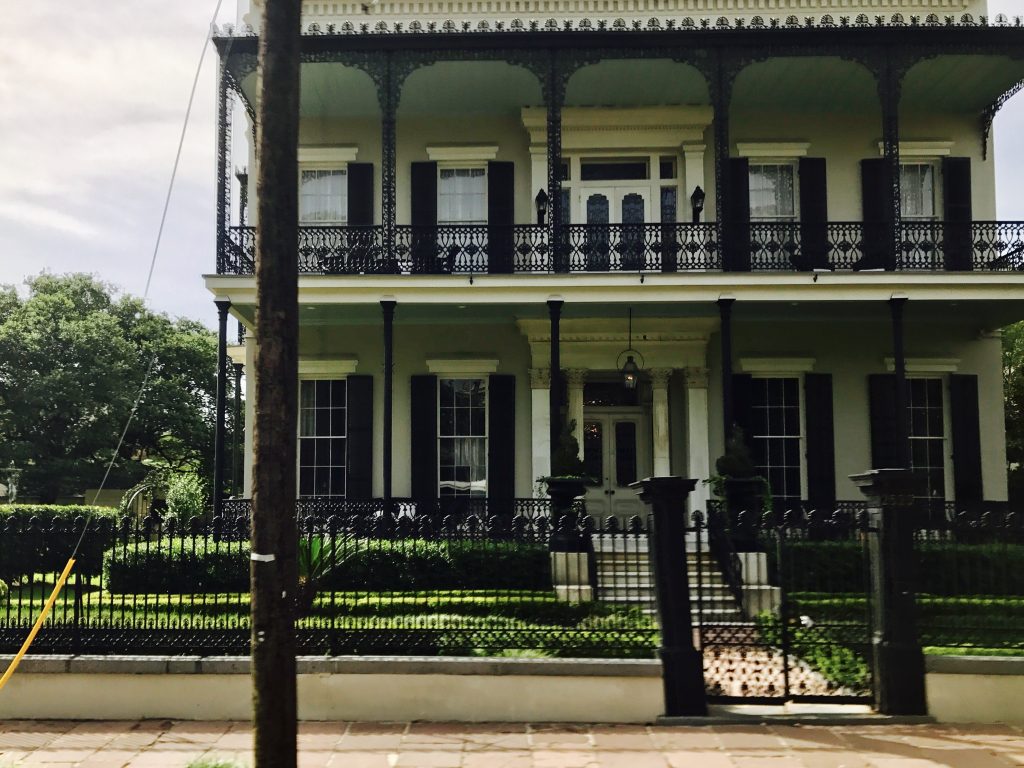 Nicky was a little naughty with his money and lost himself a good few houses. One of these houses was an absolute stunner in the New Orleans Garden District. Although he has actually lost two houses in the Crescent City. The other involved brief stint in the so called serial killer Madame Delphine LaLaurie’s mansion. You can find out a little bit more about this Delphine hooligan by clicking here. Nicholas Cage is a bit mental and has been known to bed alligators. If you fancy learning more about his ‘unique’ and freaky ways. I have added a link to a superb interview in Vanity Fair.

St Charles Avenue is a ripe peach in the New Orleans fruit basket. It runs all the way from Canal Street, through the Business District, the full length of uptown New Orleans, ending one block past Carrollton Avenue. The Carrollton Neighbourhood used to be an independent city, yet now all the neighbourhoods interlink wonderfully. Back to St Charles, this avenue is famed for its exquisite antebellum mansions and huge oak trees. There are oaks on St Charles that are older than what my great, great grandmother would be if she was still alive.

St Charles Avenue is one of the main parade routes in the world famous Mardi Gras festival and there are still remnants of the fest outside of the Mardi madness. If you look closely at the trees on St Charles, you will see the occasional beaded necklace hanging from the branches. Even without the jewellery, I’m keen to visit New Orleans during Mardi Gras. The jewellery helps. In fact, you may even see me, bosoms elegantly decorated in the local news (and plastered all over The Aye Life) next year. 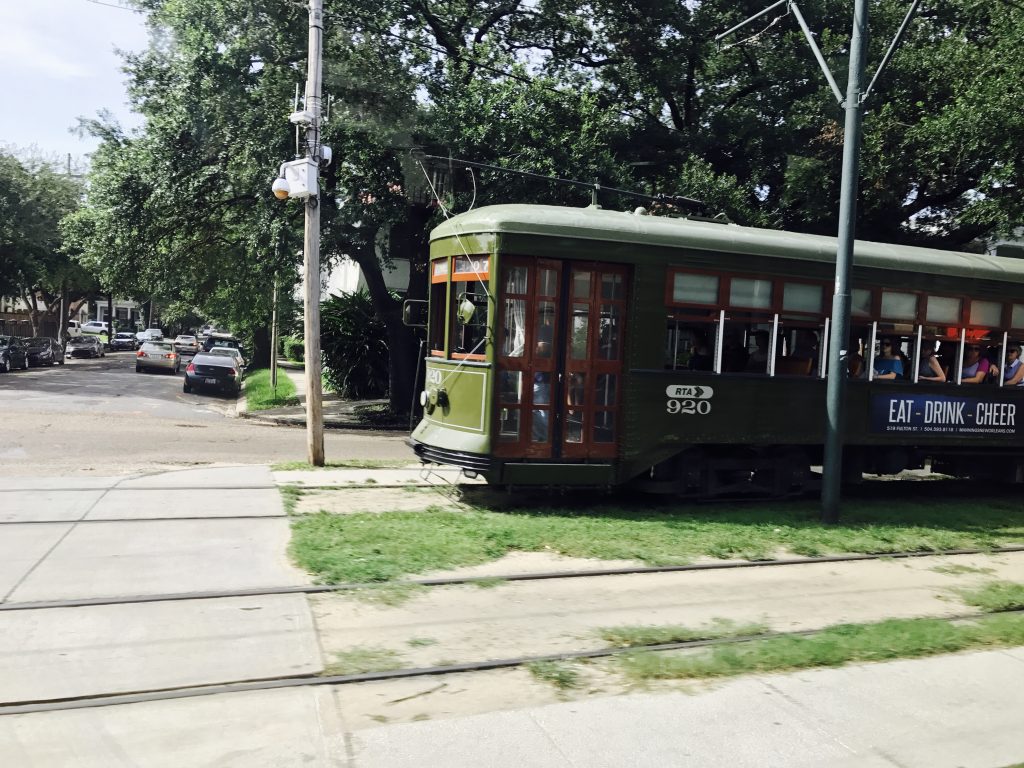 Why we waited until the end of the second week to figure out the street-car thing is beyond me. 37 Ubers later yet we could of got one of the most authentic means of transport without having to sell an arm and a leg.

The St Charles Streetcar is the oldest operating street car in the world. It runs the whole length of St Charles past all of the beautiful mansions and past the Audubon Zoological Gardens. It also costs anything from 3 dollars for a one day pass to 55 dollars for a 31 day unlimited ‘jazzy pass.’ And you thought Uber was cheap. The Streetcar is classic and so classic that it definitely doesn’t boast air conditioning. I guess all pros have their air cons, or not so much… 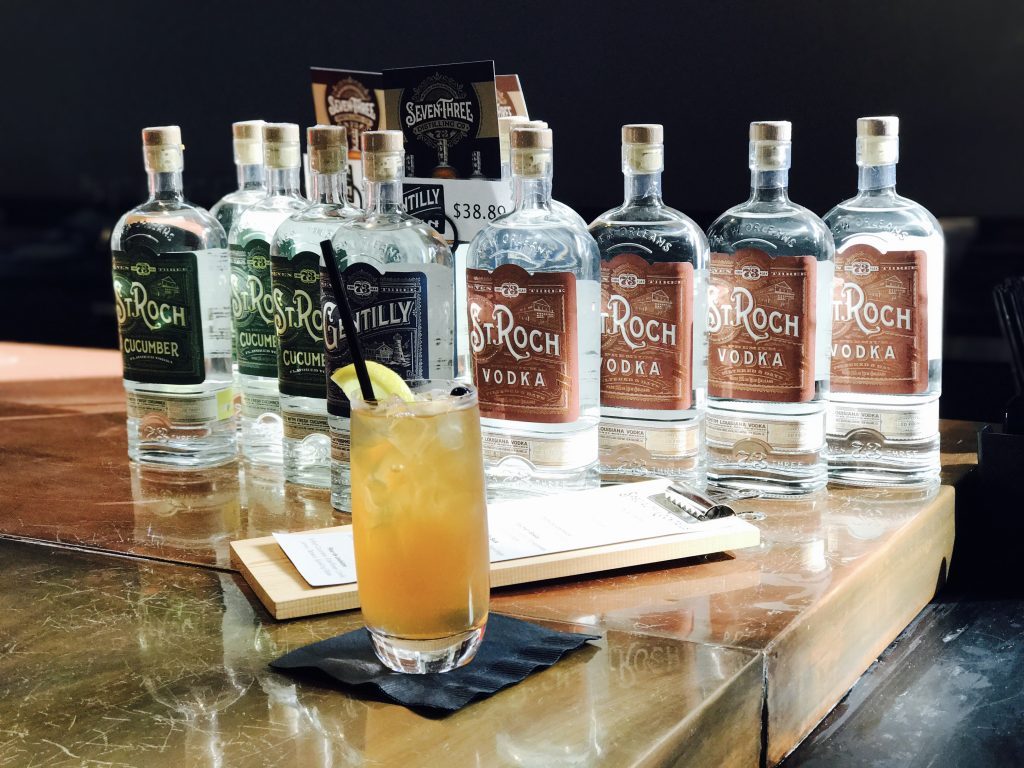 Cajun Encounters have the tour route mastered down to a T, a G&T to be exact. The last stop on the cool, calm and collective City Tour was at the Seven Three Distillery.

Seven Three is a brand new distillery within New Orleans and has only been operating since December 2016. 73 represents the number of neighbourhoods in New Orleans and they are all about keeping things local. It just so happens that the week we visited, was their introductory week of their Gentilly Gin. It’s like they knew we were coming. This is a very forward thinking distillery and although they currently produce 2 different vodkas and a gin, they are eager to conquer the market with a variety of upcoming spirits including bourbon, whiskey and rum. Seven Three Distilling source many of their ingredients as locally as possible, with many of their booze bottles sporting a local name. We cannot wait to see what they have up their sleeve! 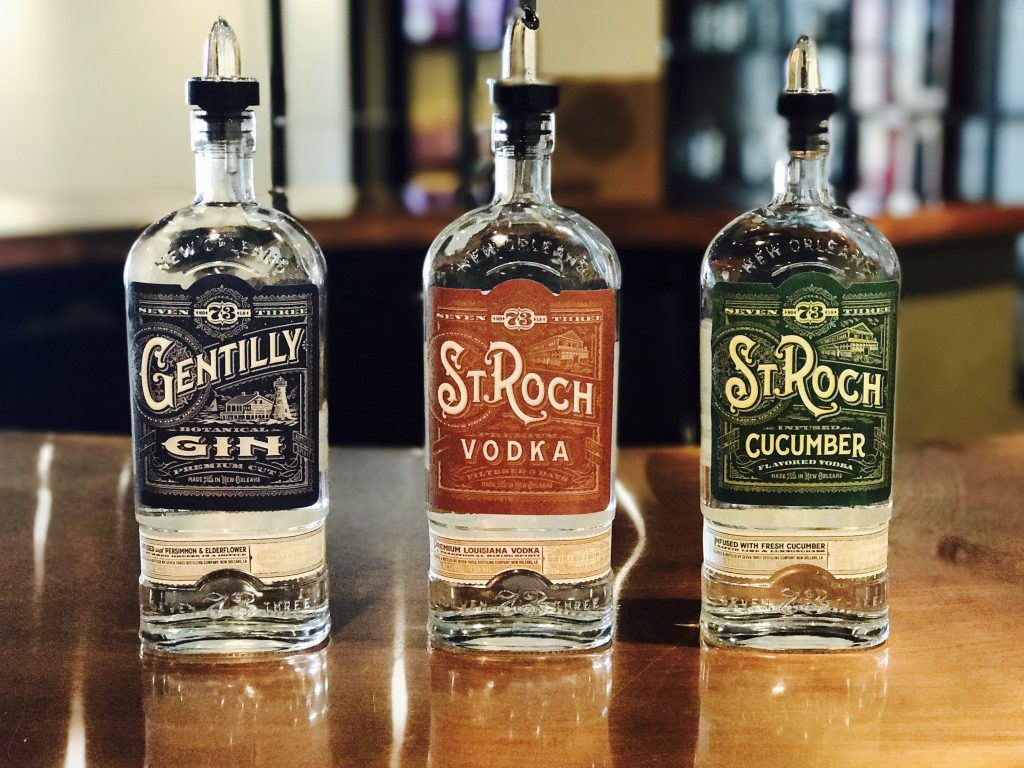 The Cajun Encounters Afternoon City Tour lasts around 2 and a half hours. In this article, we focused on the areas and learnings of New Orleans that we hadn’t yet picked up and we haven’t even touched on the days education. The French Quarter was our base of spades for most of our trip so we seen a lot of it, even outside of the many bars! We documented this greatly in our Royal Carriages tour review.

The City Bus Tour is an absolute must and we would suggest taking this tour at the very start of your trip. It is a superb way to get your bearings and find your feet. Don’t be daft like Scott and I and wait until near the end of your trip to see the whole she-bang!

We were a couple of very lucky duckies during our stay in the Crescent Cutie. Cajun Encounters provided our City Bus Tour completely complimentary so all we had to worry about was a sore hand from note taking. We would like to thank all of the team at Cajun for smashing us out of the park with their outstanding city tour. Butch and the sundance bus exceeded expectations with knowledge, humour and professionalism. Seven Three Distilling knocked up a pretty shhh-uperb cocktail to top off a wicked day. As always, my opinions are relevant, amusing and always my own.