Caledonian Sleeper from Aberdeen to Preston 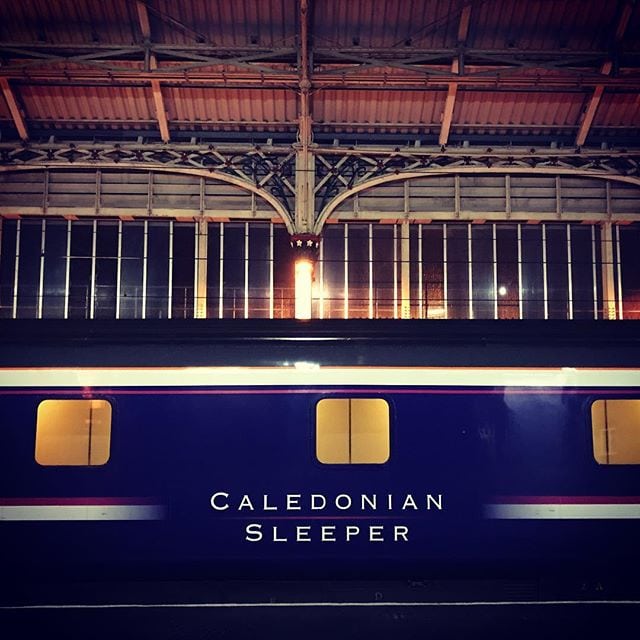 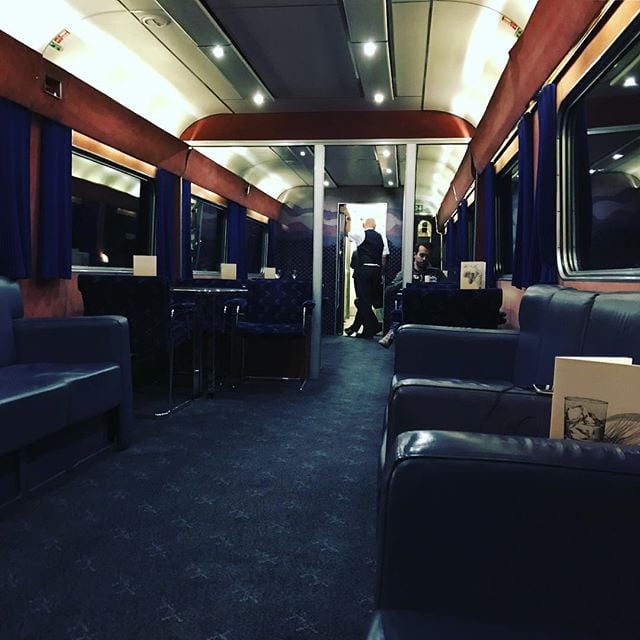 Being travel bloggers, our way really is the highway. In this case, we were due to hop aboard the Caledonian Sleeper. The Caledonian Sleeper is an overnight train which travels from a variety of cities in Scotland to a variety of cities in England. There are 3 different types of accommodation on-board. First class, standard and seated. The Sleeper train is known for its route to London and I was in one huge huff with London.

We were initially going to be enjoying a long weekend in London. However, at the very last minute, this trip completely fell through. At this point, I had no idea where else the Sleeper even went. This left me slightly distempered and resulted in me phoning the holy hell out of England for 6 hours straight. Here I was, oot with a map and a magnifying glass figuring out a plan literally the day before we were due to leave. Just call me Lady Logistics.

I would gladly take some extra random in my random sandwich. Why Preston? It wasn’t as though my ‘to-visit’ list was M̶i̶a̶m̶i̶, J̶a̶m̶a̶i̶c̶a̶ oh yeah, Preston. However Preston is actually a bona fide base for exploring the North of England and I had my eyes set on Las Vegas, sorry Blackpool.

Talk about going from one extreme to the other. Here we were, with our minds made up that we were going to go to Preston and then on to Blackpool, from the Northern Lights of Aberdeen to the Blackpool Illuminations. From one seaside toon to another one boasting a hoorna leccy bill.

Host with the most 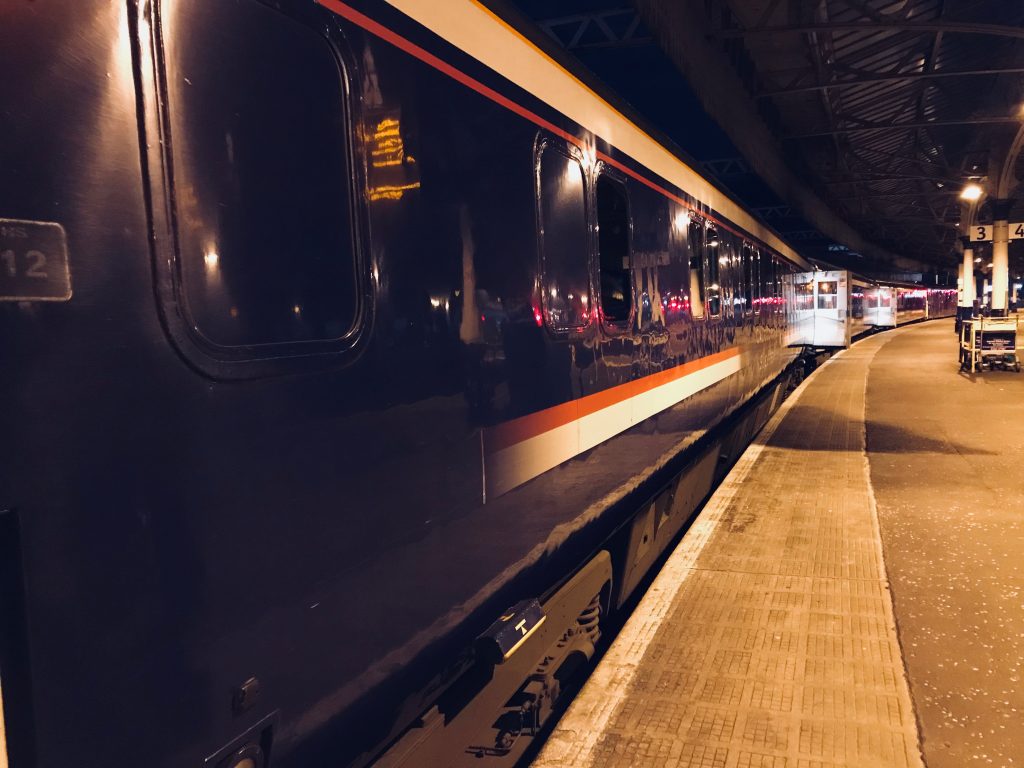 With suitcase in tow, off we dandered down to Aberdeen train station to catch the 9.43pm Sleeper train to Preston. The train was due to arrive in Preston at 4.30am and it just so happens that I love an early start. HA.

We were greeted by one of the Caledonian Sleeper hosts on the platform who reminded us of how early our morning was going to be, with a definite air of ‘Good Luck/rather you than me/why are you going to Preston at 4am’ in his voice. To be fair, I think Scott and I may of had some crazy in our coffee that morning. But this is what adventures are all about… isn’t it?

It wasn’t long before we were showed to our First Class interconnecting cabins. The host took our breakfast orders and ensured us that he would wake us up around 30 minutes before arriving in Preston. This was welcomed information as anyone who knows me knows that my hearing is shocking and I am forever mishearing people. Never mind trying to hear an alarm on a train with ear plugs in. 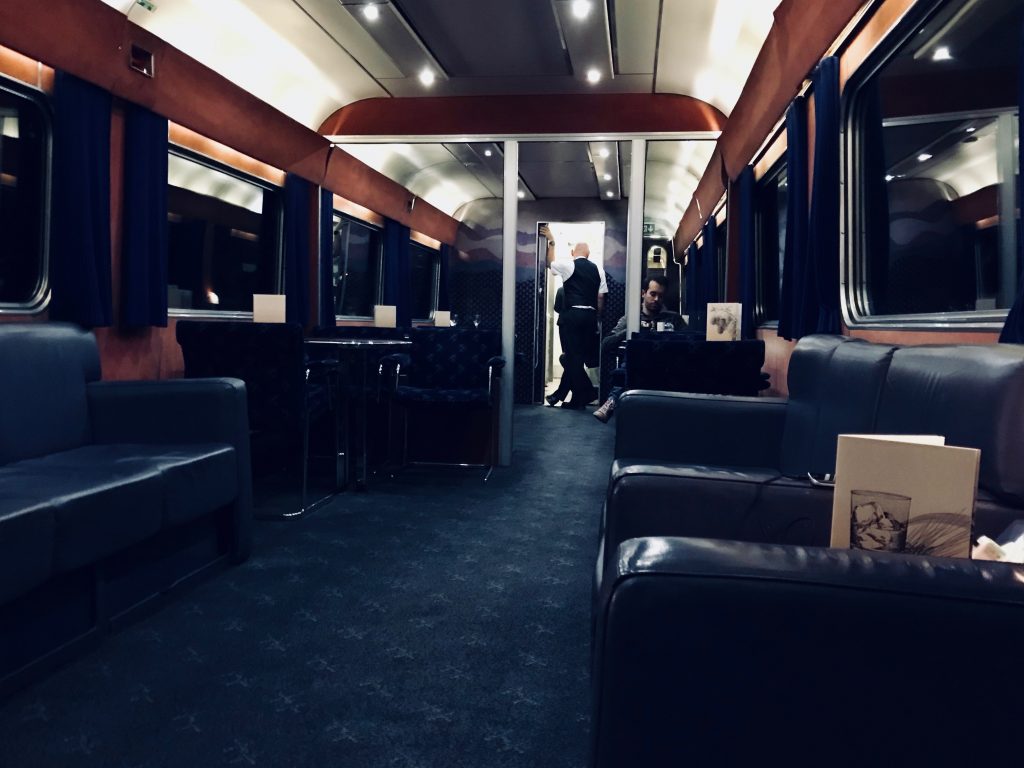 The Caledonian Sleeper also has a lounge which is restricted to first class passenger access during busy periods. Standard Class passengers can also use the lounge in order to purchase food and drink to take back to their rooms. Seated passengers do not have access to the lounge but can purchase items from the counter service.

We didn’t use the lounge during our stay other than to pop in for a quick nosy. Had we been on a longer journey, we would definitely have popped in for a meal as the menu did look rather tempting. We also noticed the evident locality of items displayed on the menu. Glen Garioch whisky, made in Scotts hometown of Oldmeldrum was on offer. I definitely saw the look of temptation in his eyes. 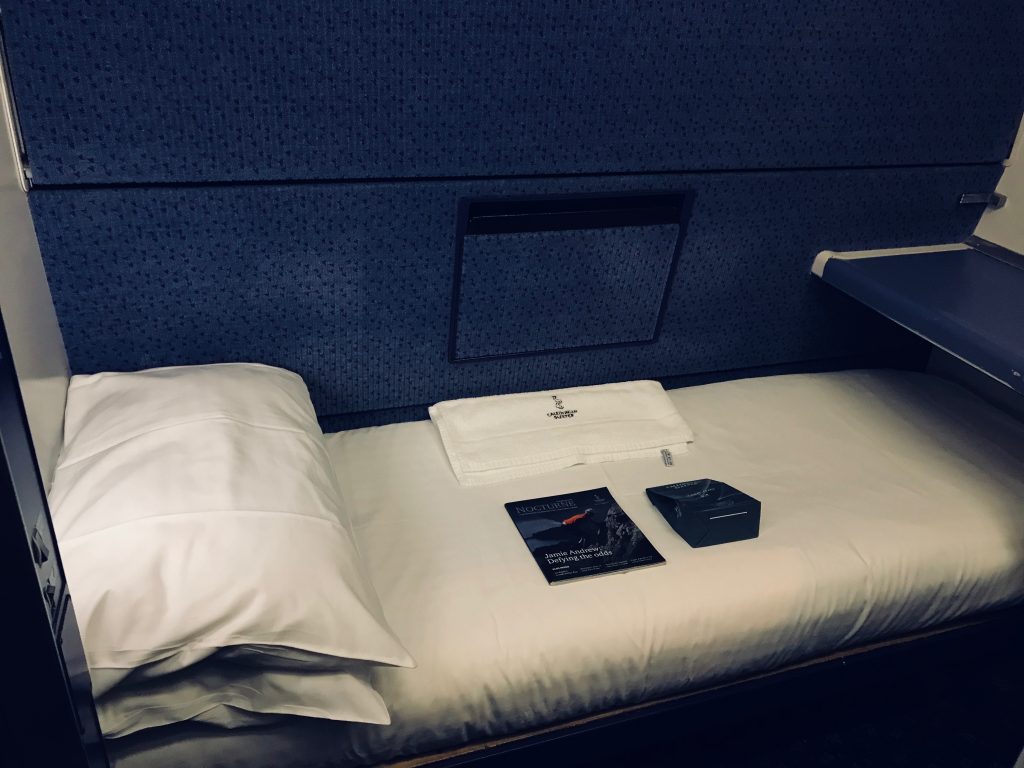 Each cabin had a bed, a sink, an array of lighting and USB charging ports. There was also a little sleeper pack on each bed containing earplugs, an eye mask, Arran Sense of Scotland toiletries and a face cloth. The bed is comfortable and has two pillows and an actual duvet. Many hotels these days don’t use a proper duvet but I am a bug without a rug unless I have a decent duvet so this I paid particular attention to. I also packed my own pillow, in case there was only one in the cabin. It was a pleasant surprise to have 2 pillows and a functioning duvet.

After a nosy and a bosie, (an Aberdonian cuddle) I did a magicians makeover and had my jammies on in the blink of an eye. I’m still not sure whether the done thing is to wear pyjamas on the Sleeper. The toilets are located at the bottom of the carriage and due to the fact that I never packed slippers (oversight), I did end up walking to the toilets in rather questionable attire. Thankfully I never bumped into anyone or I would of been mistaken for a zebra from the Wild West. 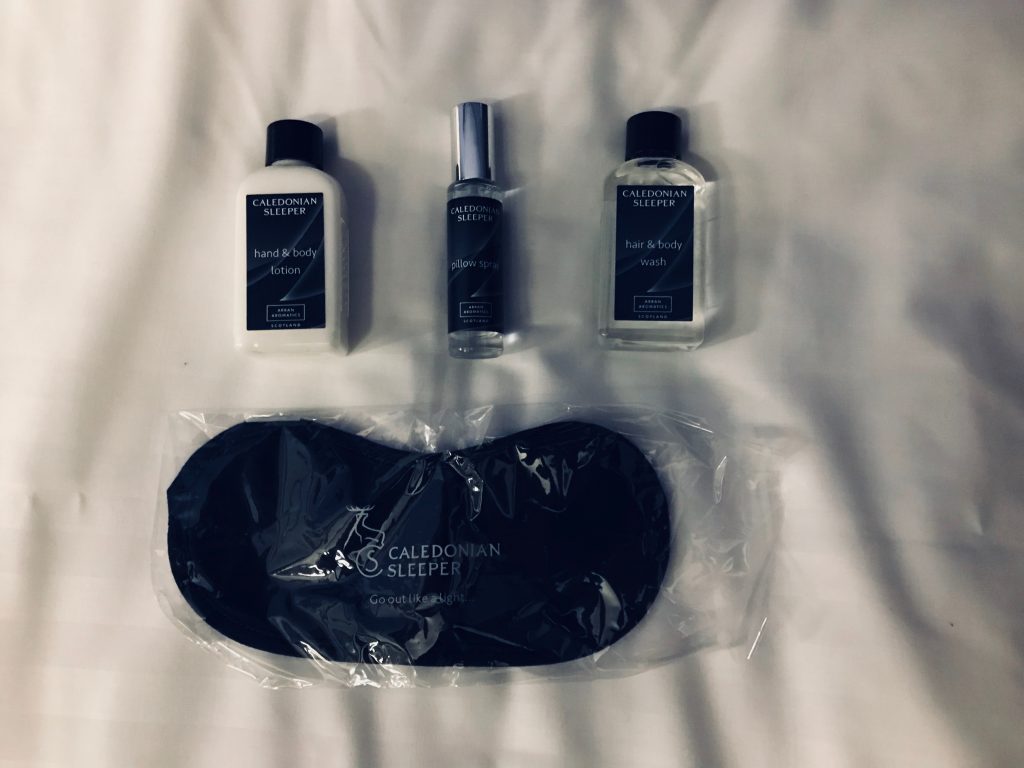 And in rolls the age old question, how did I sleep? I’ll be deadly honest, the fact that we had to wake up at 4am for our Preston stop and knowing that I was going straight to bed at the Travelodge in Preston meant my subconscious wasn’t exactly playing ball with letting me deep sleep. I was far too excited to be on a moving bed. I kept thinking that if the train itself was invisible then my bed would look like it was floating through the air at record speed. Scott was very much the same and genuinely said ‘I don’t want to go to sleep, why can’t this (Sleeper) train travel through the day so I can sit up on my laptop. Why anyone would want to sit on a laptop is beyond me…

However, on our way home from Preston, I actually slept very well and discovered a wee trick to give myself more room. I, like many others, do not sleep in a straight plank. In fact my bum sticks out for miles even when I’m not in bed. So here’s a wee trick for all those side sleepers with sticky out bums.

Turn your suitcase on it’s side and push it right up against the side of the bed. Place a pillow half on the bed and half on the suitcase, I had a spare pillow but you can use anything to mask the gap, a jacket works. This gives you extra space to stretch out without compromising your nights sleep. My bum and I slept brilliantly.

We had a fabulous time in Blackpool (await write-ups) but our train home from Preston was at 1am. So after making use of a couple of local bars at the station, we were absolutely delighted to be boarding the Sleeper. Again, our host took our orders for breakfast and left us to our own devices. This journey definitely seemed far more relaxed as we weren’t due to arrive into Aberdeen till around 7.30am. This made all the difference and I got a good few hours of sleep (with my epic suitcase trick) before being woken for our breakfast. 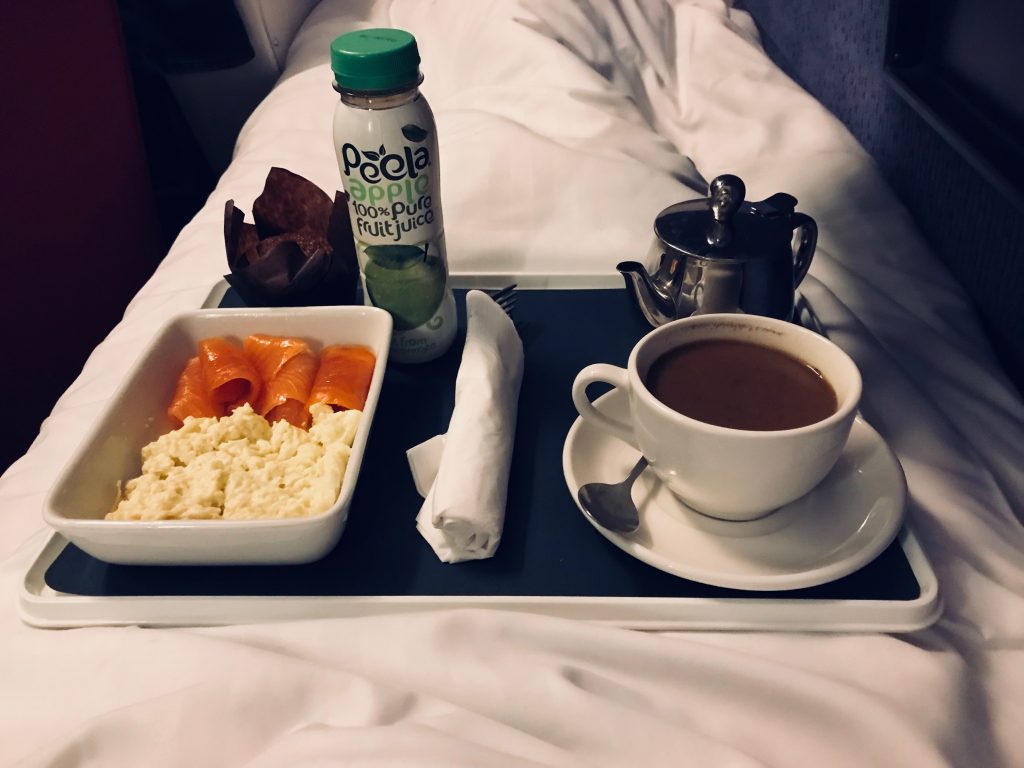 Scott enjoyed smoked salmon and scrambled eggs which wasn’t at all an odd smell to wake up to. I had myself a pot of granola, berry compote and yoghurt. All of this arrived with tea, coffee, juices and a couple of splendid carrot and orange muffins.

Fair play to the team at the Caledonian Sleeper for making good use out of local brands. There’s nothing I love more than a wee story behind my muffin. In this case, my muffin came from the Bad Gal bakery in Muir of Ord. The yoghurt in my granola pot came from the Black Isle, which is on the outskirts of my hometown of Inverness. Serco, who run the Caledonian Sleeper also operate Northlink Ferries and their dedication to use of local brands is second to none. 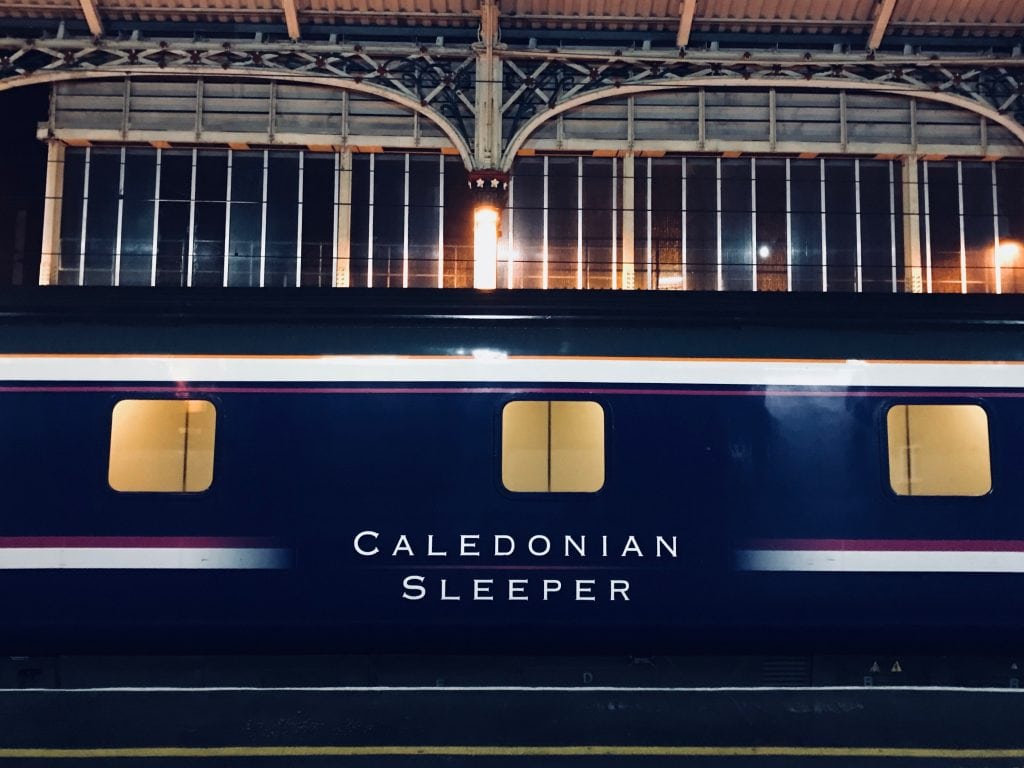 Overall, I would highly recommend the Caledonian Sleeper to those who hate flying overnight. Which I do. It certainly beats being restricted to a piddly wee chair with no leg space and you can bring as much luggage as you like. Travelling on the Sleeper train means you don’t have to waste a day travelling. On the another note, if you are a light sleeper, you may struggle to get off to sleep. That isn’t anything that a gin in the lounge can’t fix and it still beats being awake all night on a plane. Also, if you are travelling standard, you may have to share with somebody of the same sex.

In terms of décor, the train could do with a wee makeover. However Serco have already thought of this and are due to introduce a brand new £150m fleet in Spring of 2018. These new trains will have sockets for charging devices as opposed to USB ports. They will also have WiFi, double beds and en suites with showers. We cannot wait for the overhaul and look forward to taking a train from Inverness to London to experience the longer journey and the lounge. You can track progress of the Sleeper overhaul here.