I don’t do it by halves

So here I am, sitting in my pyjamas, scoffing truffles at 9.48am, on a Friday morning, in The Principal Hotel. The sun is shining. Edinburgh Castle, completely visible from our window, looks majestic, sitting on her hill, the cities guard. Now, is that not the best way to start off any day? Well this, is half of my life. I live The Aye Life, sometimes. And I live the home life, the rest of the time. But when I do live The Aye Life, I don’t do it by halves. Which is why I am nursing a hangover, and scoffing on truffles at what is now 9.50am. 2 minutes, and all those genius words. This is why I do what I do. Why the hangover you ask? Well… we will get to that.

We were invited along to the first ever Chef’s Table at The Principal Hotel in Edinburgh (George St, for The Principal die-hards). As soon as we heard the event was to be a Chef’s table, we literally became restaurant critics. I was so ready to pick apart each dish, even with little-to-no-clue what I was talking about. But the Chef’s Table also boasted a wine flight. And I don’t know about you, but wine makes me sexy and intellectual. But unfortunately, I only had half an hour of sexy and intellectual before I became giggly and just, a wee bit daft. So off we popped, on the train to Edinburgh, full of buzz and floof.

Yes, this a thing. And yes, we all need one. Oh, my days. I had never seen a cocktail tree before but now that I have, I feel like I’m a better person. This is what we were met with when we arrived at the majestic Printing Press Restaurant within The Principal Hotel. You know that moment, in films, when lead A, looks at lead B, and there’s that romantic ‘Barry White First, Last, Everything’ moment? I was lead A and lead B was a cocktail tree, with passionfruit martini leaves. Someone up there had been listening. And Scott, oh Scott. Scott said he wouldn’t really be indulging because he didn’t want a hangover. Which is what we all say before we end up drunk. He had 3 cocktails before The Chef’s Table started. That is what they call the cocktail tree effect.

Scallops and Squid Ink and Wine, Oh My 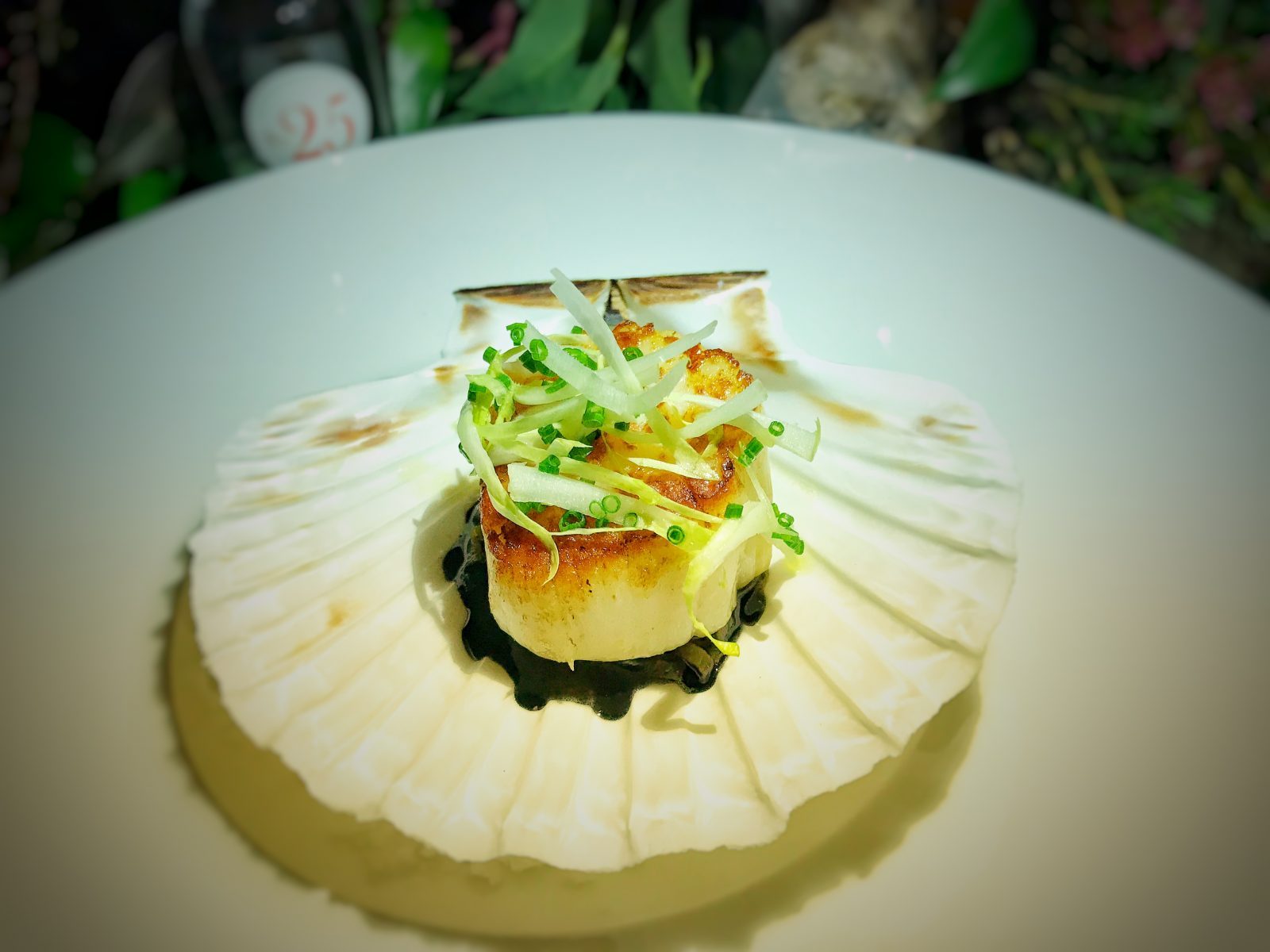 First course and we were off to a winner. Hand-dived Orkney scallops with orange-braised endive and squid ink sauce, paired with La Serre Chardonnay (and squid-ink soaked bread if you’re anything like me). Beautiful dish, slightly bitter but in the best way. And squid ink? Like, can I just buy that in Tesco? I need more Squink in my life (Squid ink). The Chardonnay was a nice pairing, although a little too crisp for me, I’m a Pinot girl.

When I Dance, they call me Pecorino 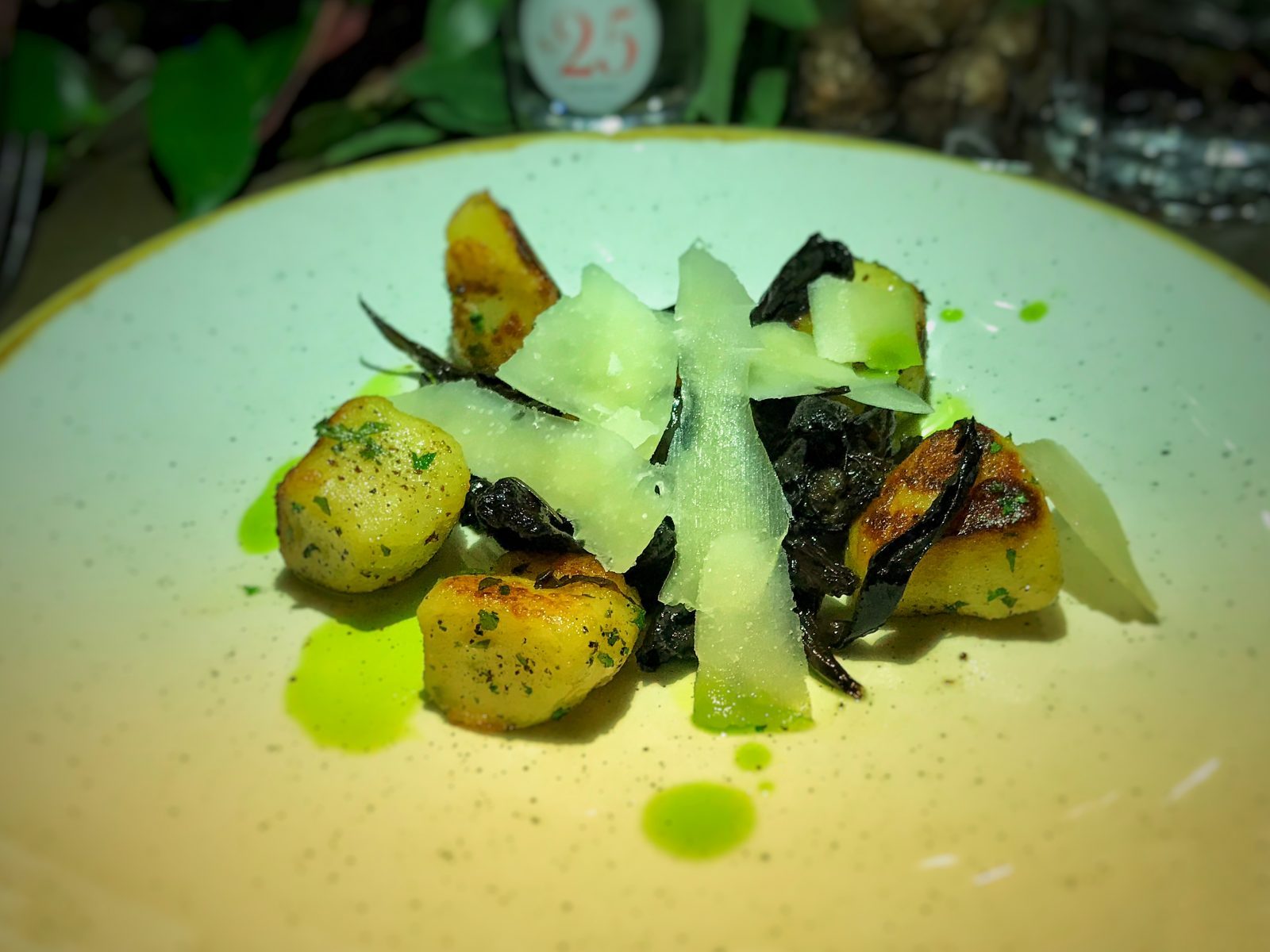 Next and everything. Herb gnocchi, trompette mushrooms and pecorino (which is a cheese), paired with The Spee’Wah Pinot Grigio. Huge fan of this pairing. Pinot and gnocchi totally beat spag bol and Asti, and like, I need this in my life more. And trompette mushrooms. Wow. I can honestly say I had never had a trompette mushroom before. They gave the dish lovely texture and huge Autumnal vibes.

Mary had a little Lamb Faggot 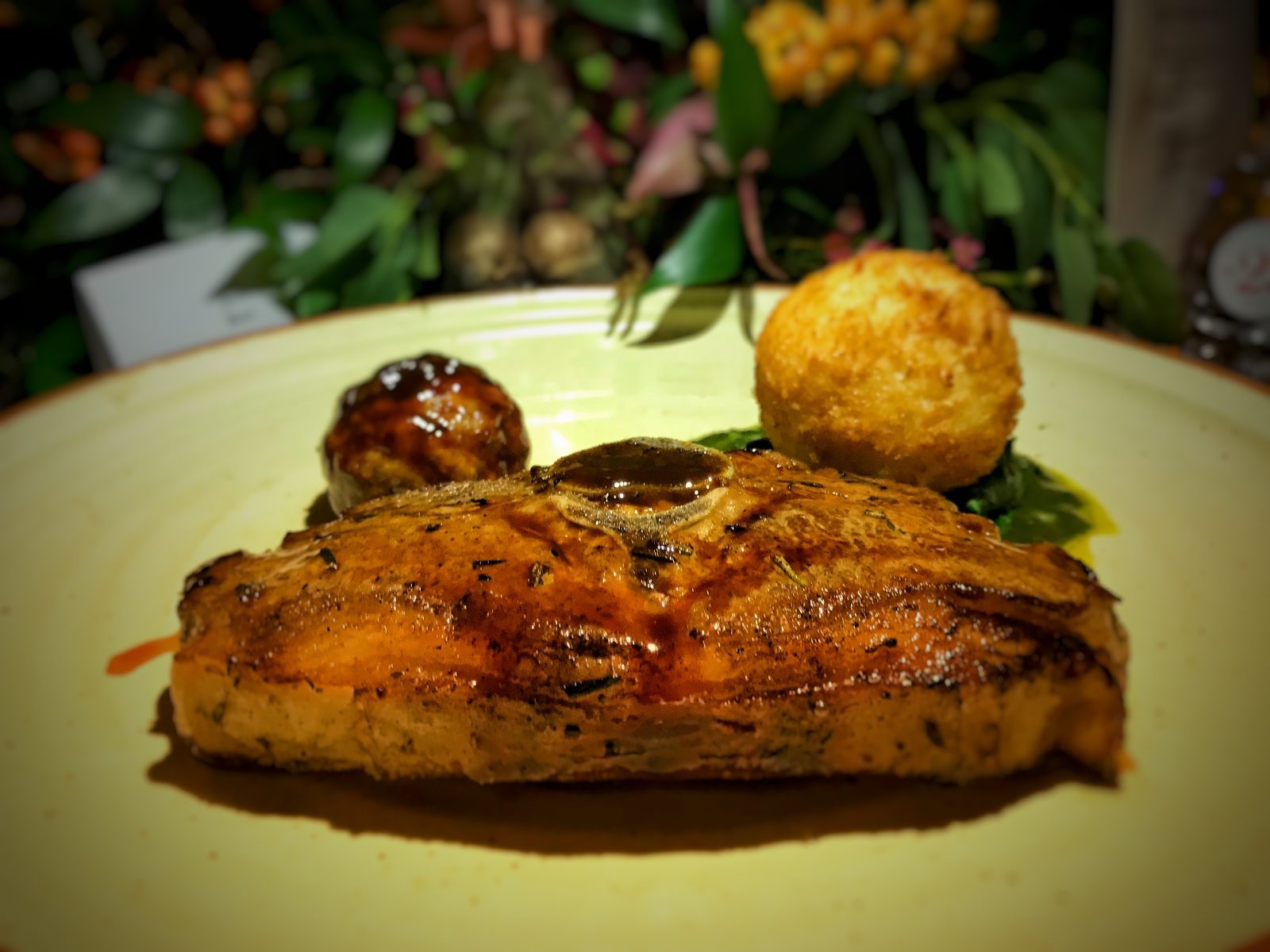 I’m not a lamb fan. But I am a food fan. Scott is a food and lamb fan. So all in all, this was well received. I don’t normally eat lamb but last night I became a different and perhaps better version of myself. The Huntingdon Farm Barnsley lamb chop with lamb faggot, a dauphinoise croquette and spinach was paired with the Hubert et Fils Cotes du Rhone, red wine. I don’t like red wine, but like the lamb, I was kind of invested in this whole experience. This was a hearty, Winter dish which packed a marvellous punch.

Going loco, for passionfruit and coco 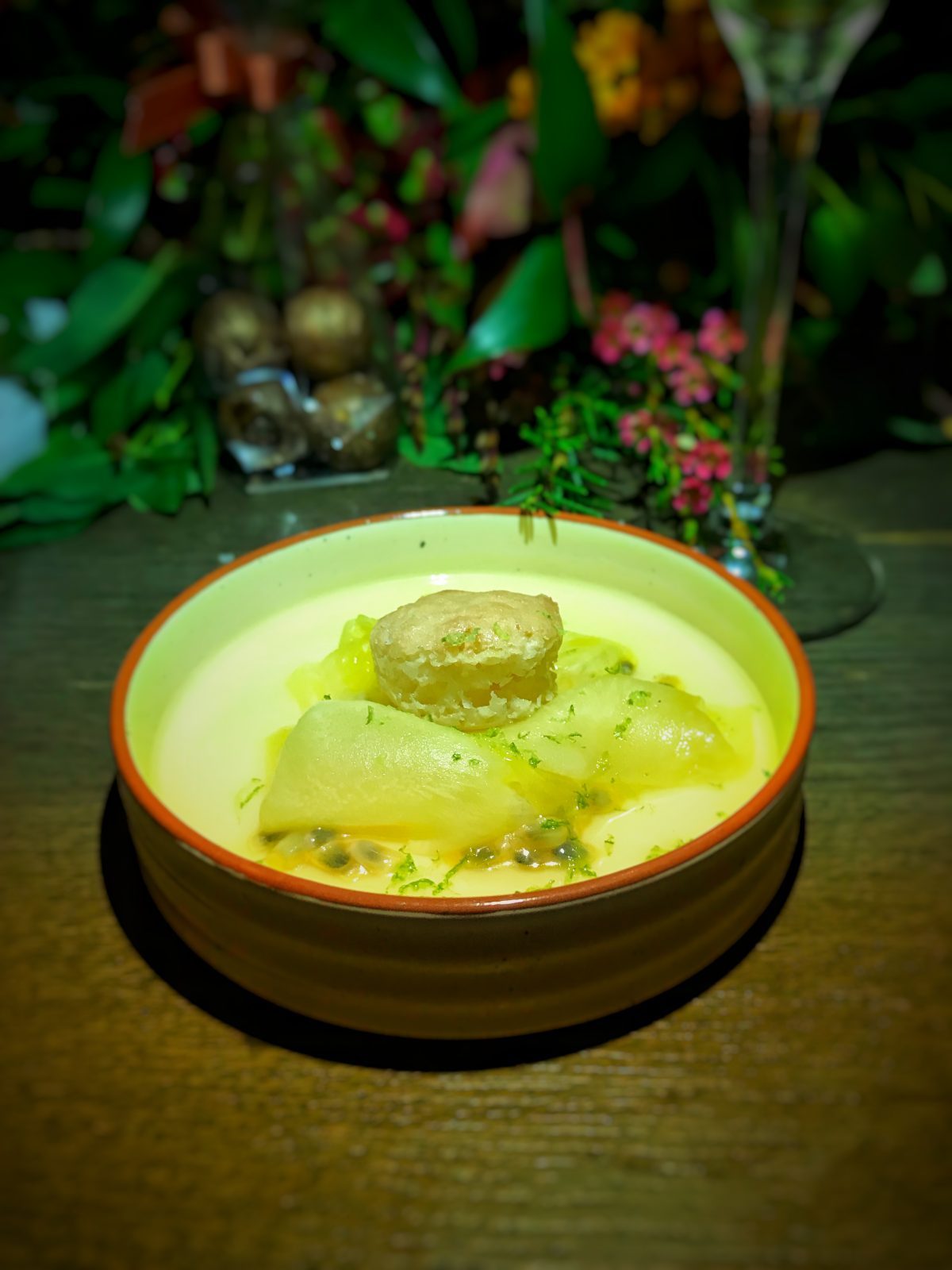 When the Taittinger Brut Reserve arrives at the table, you know what’s coming is going to be a blinder. So dessert no.1 (yes, there were 2) was a passion fruit posset with liquorice-infused pineapple and coconut macaroons. I hate liquorice. Or, I did… Because this tasted less like liquorice and more like heaven. This is the best dessert I have ever had. In fact, as Scott so aptly said “I could eat another 20 of those.” Champagne and passionfruit. Tick. Tick tick tick tick tick.

Honey, I thyme-roasted my plum 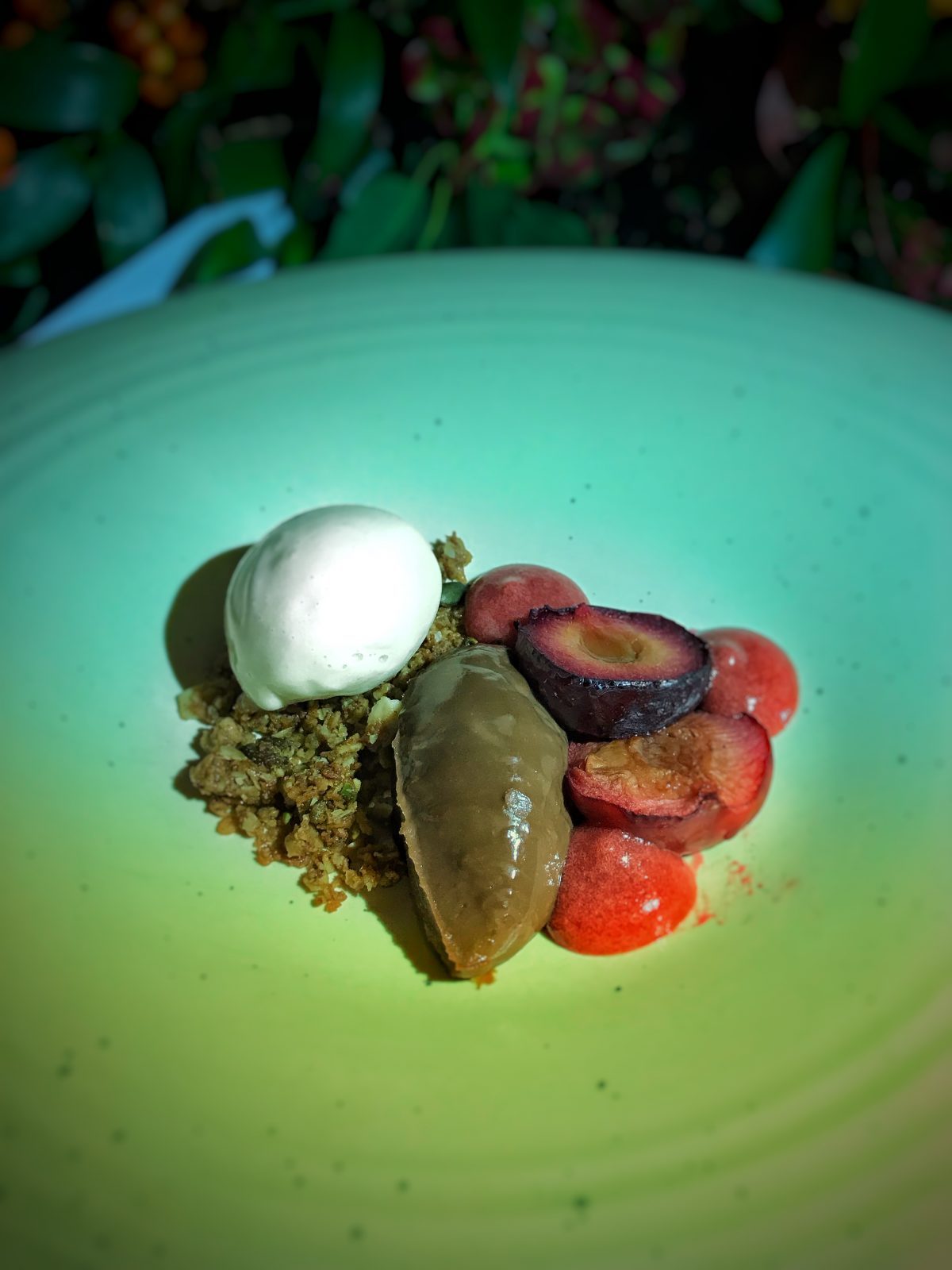 This is the part of the experience where Scott became like insanely attractive. And no, it wasn’t the copious cocktails and wine pairings. He sat, in his slightly crinkled shirt, sipping on Grahams Fine Ruby Port, supposedly the only port Winston Churchill would drink. You should of seen the look on his face when he found that out. There were both attempted comparisons and ultimate cringe. But Port suits Scott. And Port also suits honey and thyme-roasted plum, with chocolate custard, cinnamon granola and honeycomb ice-cream.

Please report to The Principal

We would like to thank The Principal Hotel for a lovely stay, as always, and for the fabulous Chef’s Table experience. We very much enjoyed the night, the company, the relaxed-comfortable vibes and the overall dining experience. I am, however, hungover and slightly tetchy so will be spending the next hour doing exactly what I started off the day doing; peering at Edinburghs beauty, whilst scoffing truffles and sipping sweet tea. To book your very own Principal Dining Experience, click here.