With Glasgow being the third biggest city in the UK after London and Birmingham, there are heaps of things to do here. We even got our two dogs in on this particular adventure; a City Sightseeing Bus Tour of Glasgow. Did you know that City Sightseeing Glasgow is dog-friendly? One of our dogs is becoming well versed in life aboard. 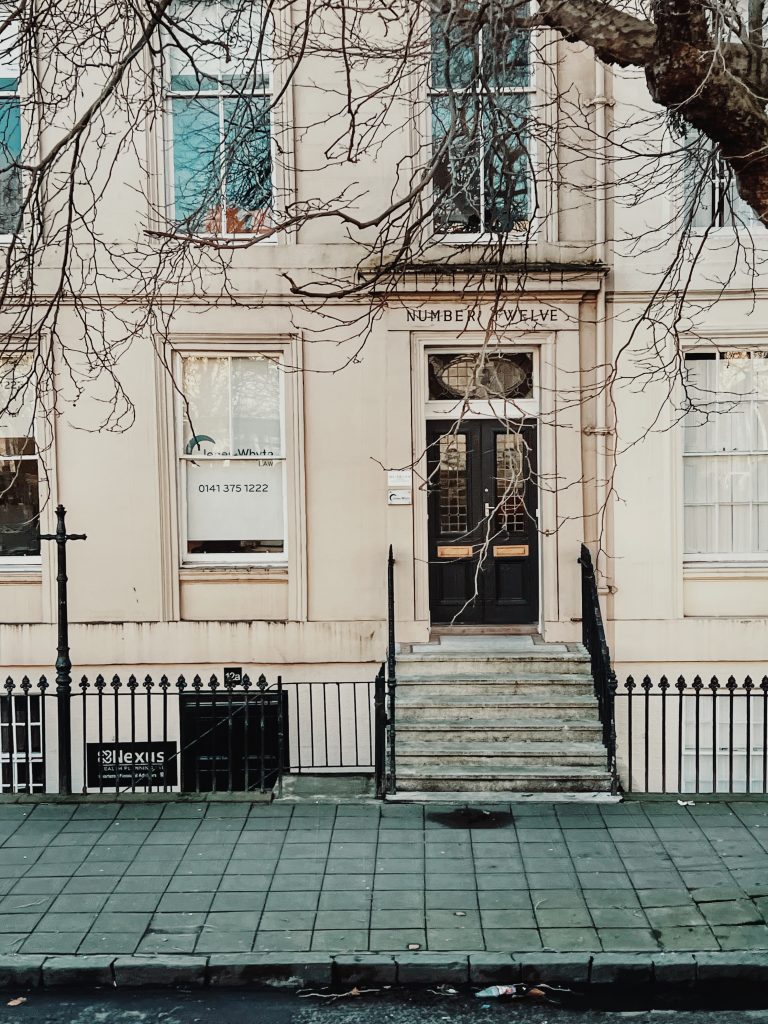 We’ve been living in the city for the last 7 weeks, asides from the odd few days in the hills of Argyll or the lochs of, well, Lomond. But, I’m still googling maps of Glasgow, and I think I will be for a long time, and that’s why we decided to go on a Hop On Hop Off bus tour of Glasgow because what better way to get to know a new city? Our thanks to City Sightseeing for having us. So, what is it like going on an open-topped bus tour in January in Scotland? We picked a bonnie day for it. Aye, it was nippy, but just like Glasgow’s own Billy Connolly said, “there’s no such thing as bad weather, just the wrong clothing.” So, we wrapped up and headed for the red. The big red. Even our big wee skinny man Corrie had on his coat. 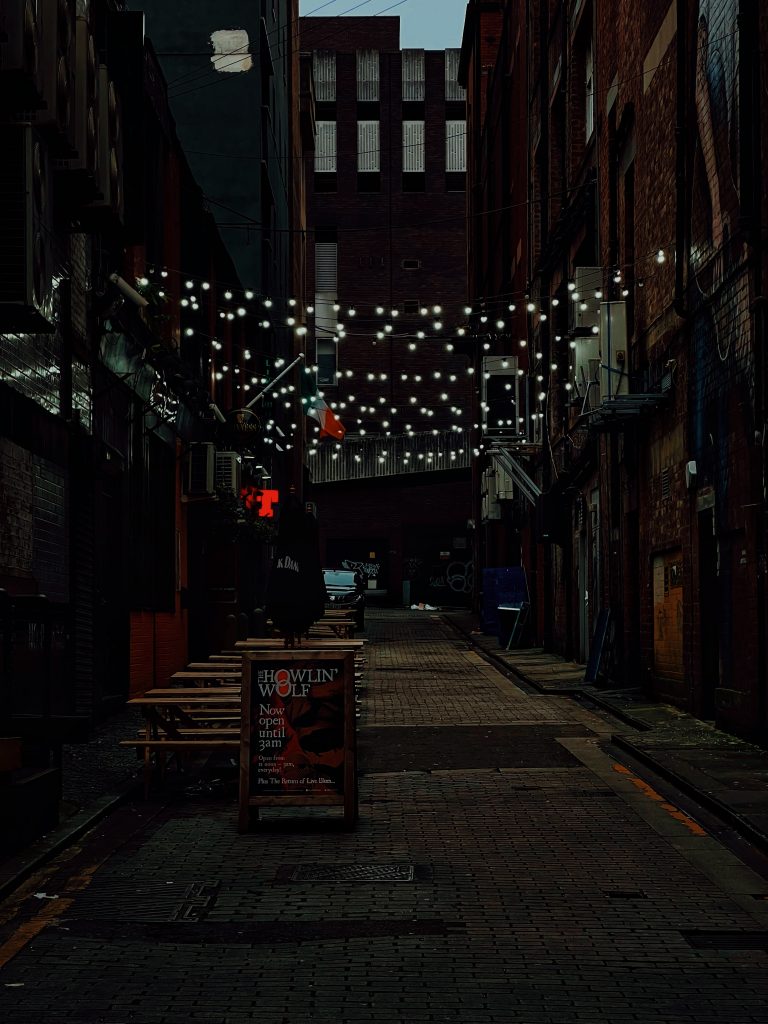 Everywhere we go, we never take the weather with us, but on this particular January’s day, Glasgow’s marvellous architecture was accentuated by a Wintery golden sun. The sky was blue and it made Glasgow pop. We’d waited for about a week to go on this city sightseeing bus tour, and I think we landed the perfect day. There were a few other folk aboard but we mostly had the top deck to ourselves. Corrie, our Hungarian Vizsla x Collie, watched everything going past, whilst Callie, our golden lab, took the opportunity for an oddly undisturbed snooze. Dogs. Can’t live without them. 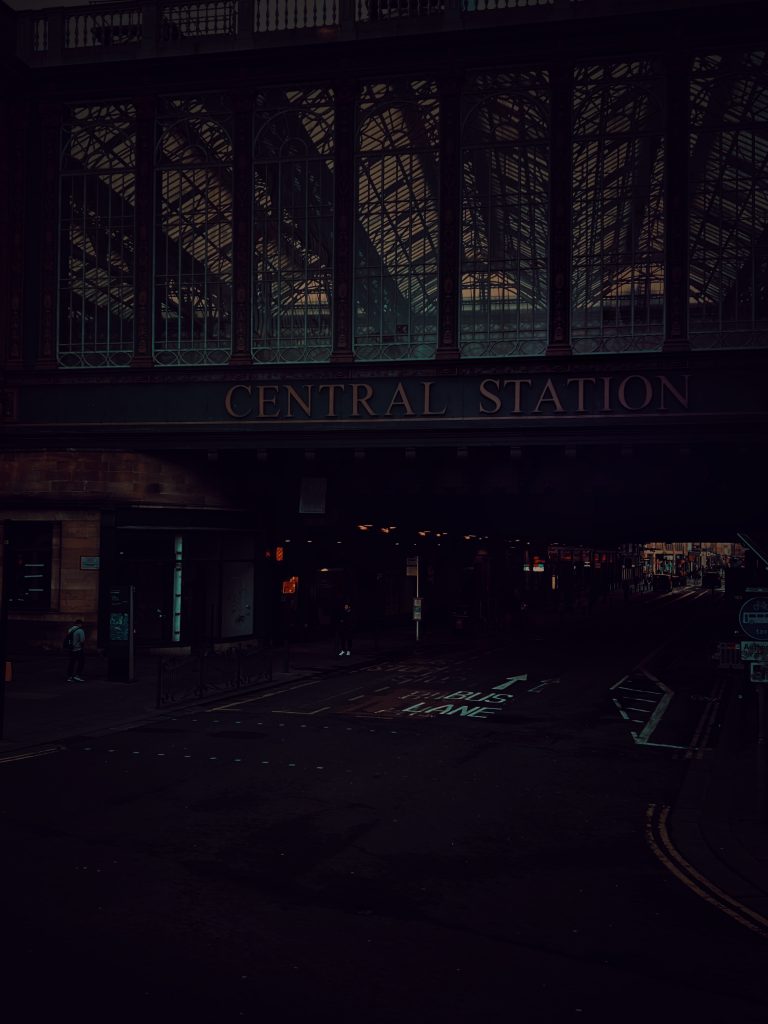 I would wholly recommend a City Sightseeing tour as a dog-friendly thing to do in Glasgow. This is a great way to see the city and it’s super easy to hop off for pee breaks. For the dogs, obviously. Although in saying that, I guess that applies to human folk too. 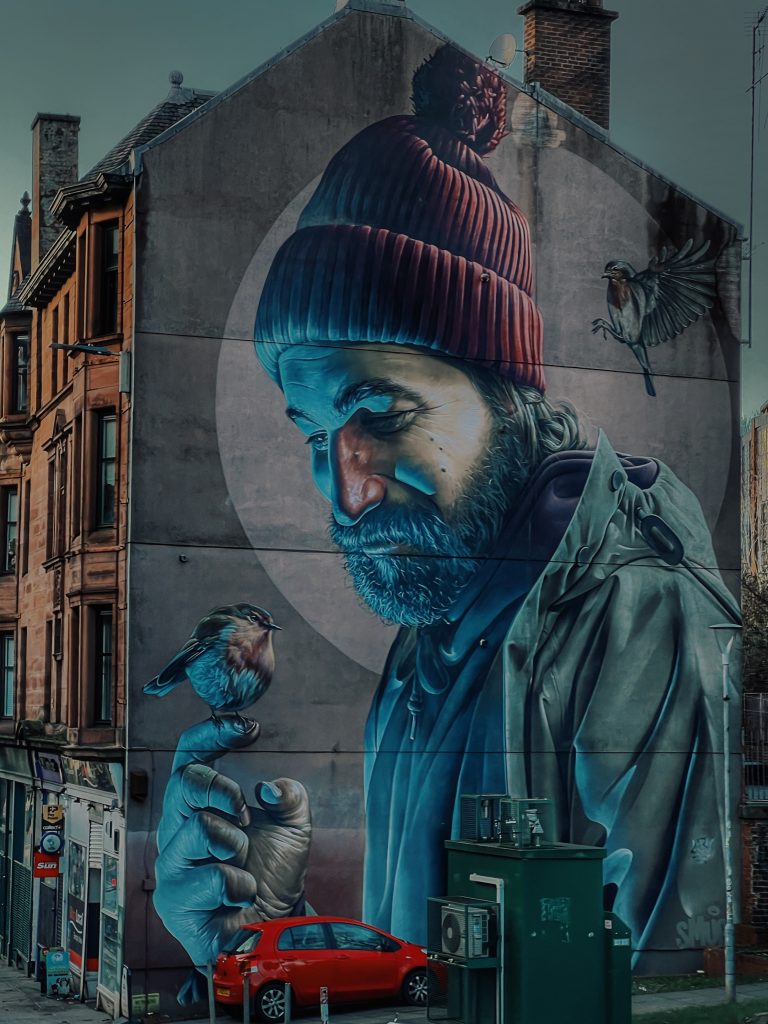 There are 21 stops on the Glasgow bus tour, and honestly, you could spend a good few days doing them all. Especially if like me, you love photography. Stops include the famous People’s Palace, the relatively new Clydeside Distillery, the magical Glasgow University, and the architecturally inspiring Kelvingrove Museum, amongst many more. We hopped on at the Riverside Transport Museum and didn’t hop off once, other than to grab a quick coffee and a wander around George Square whilst the bus had its half-hour rest at the main terminal. We’ve been here 7 weeks and yet I am itching to know this city. In fact, I’m making it my mission. 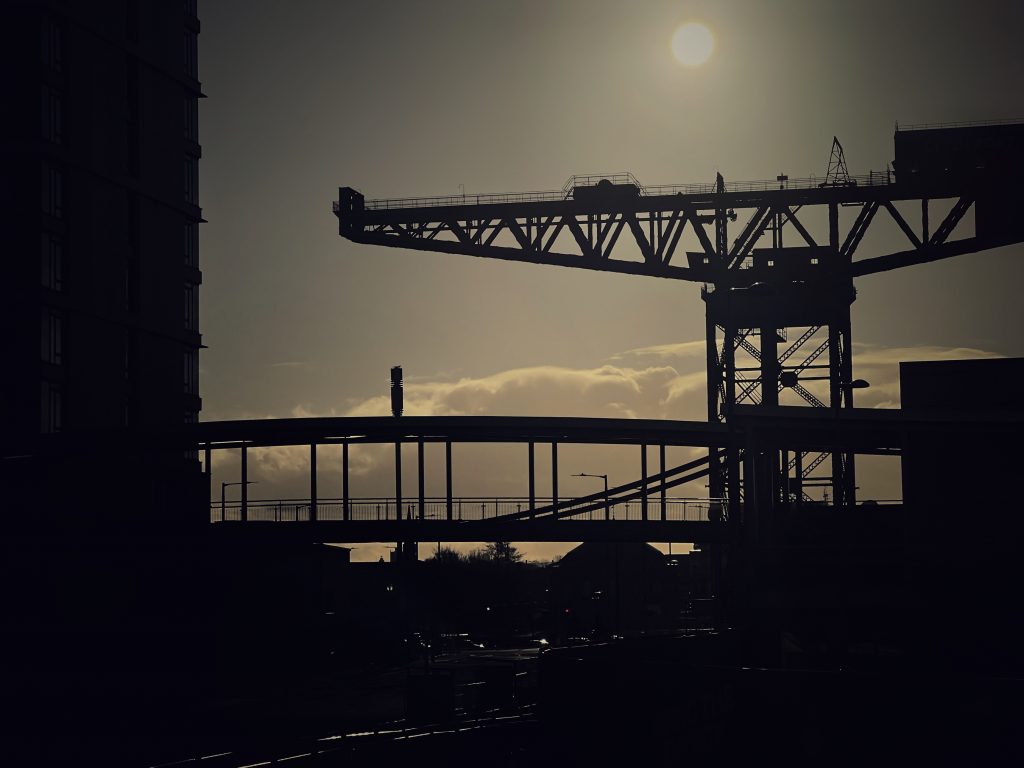 Look up. Glasgow is awash with incredible contrasting architecture. It doesn’t match. Actually, it’s completely haphazard, wild, and quirky. But Glasgow has some of the coolest architecture I’ve ever seen. I can’t tell you how many times I’ve lost my footing or walked into something because I’m too busy gawping up at the heights of Glasgow. So, alongside the fascinating commentary in multiple languages aboard the bus, it’s also a safe space to do nothing but look up at the buildings that helped to form the city we know and love today. 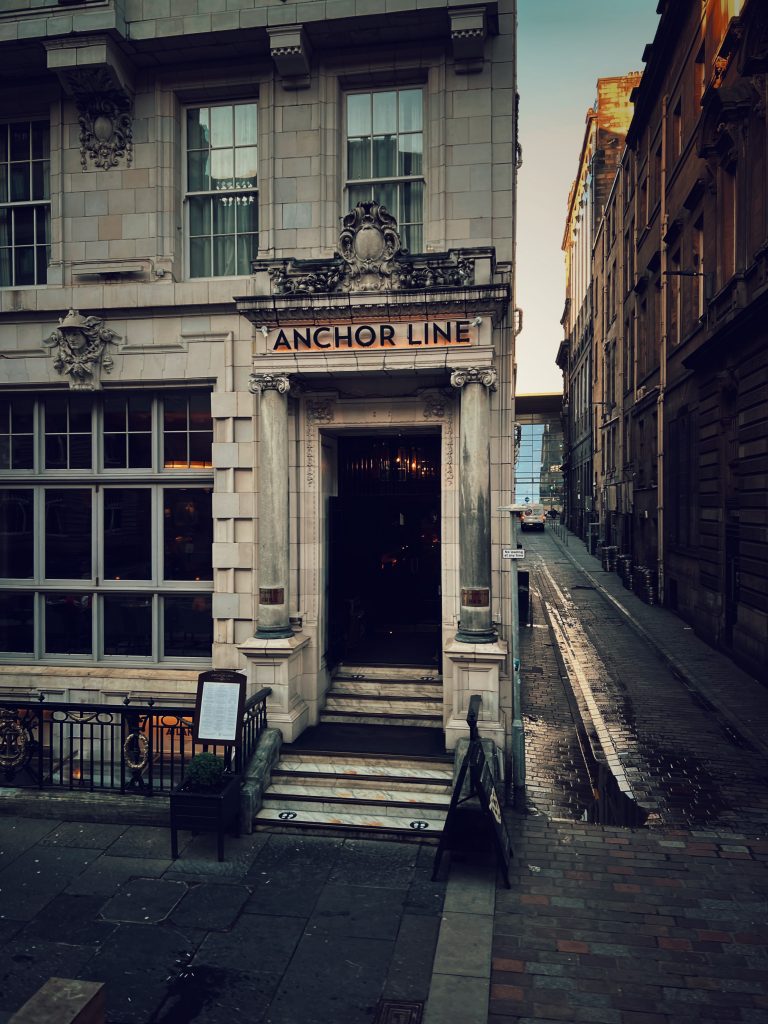 It’s worth hopping off at Buchanan Street for a wander around Glasgow city centre’s endless shops, before heading for lunch at Maki & Ramen. Glasgow’s food and drink scene is one of the best in Scotland with cuisines from every culture. The Merchant City is also another pretty cool shopping stop for quirky and independent stores, and more fab feasting. 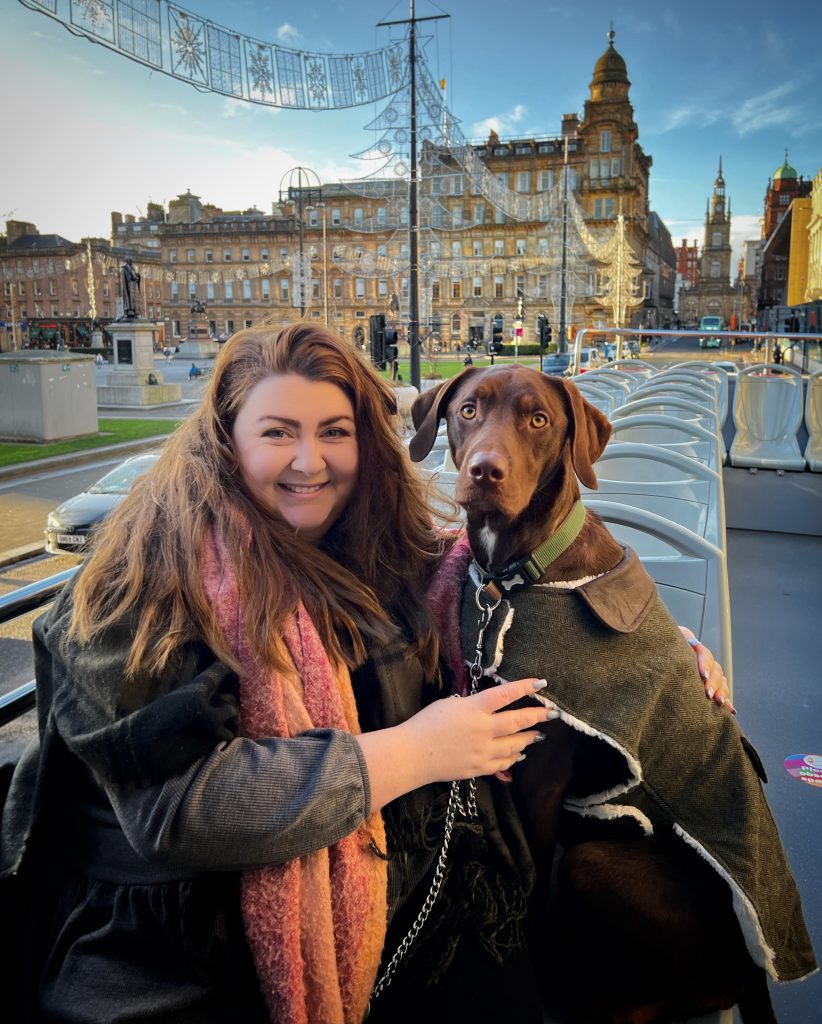 The folk in Glasgow are some of the friendliest you’ll ever meet. The banter here is second to none and the sense of humour, which you’ll notice on the tour and in the bones of the city, is what makes Glasgow so special. One of the staff on the bus tour had such good crack with our dog Corrie, and even if you didn’t recognise the accent, you could tell he was from Glasgow a mile off. It was so nice to be able to take Callie and Corrie on the tour with us. They are literally like our kids, they’re also wee tourists themselves so it was fab to take them on a tour of Glasgow too.

I love this city and can’t wait to see what else it has in store for us. Book your Glasgow tour here.