Bad boys, bad boys, what you gonna do? What you gonna do when we come for you? That’s what I sang in my head ALL DAY whilst I waited not patiently for our booking at The Spiritualist in Glasgow. I hadn’t a clue what to expect but I had stalked their menu online and, with scran like that on offer, I had high hopes. Unfortunately, I wasn’t at home, or I would have probably binge-watched Masterchef for 2 hours before dinner, like the big dirty food tease I am. But we were in the Apex Hotel (I know, the heart bleeds right?), which is literally a 10-minute walk to The Spiritualist. And to be honest, I flippin’ love the Apex so I wasn’t exactly having a bad time. 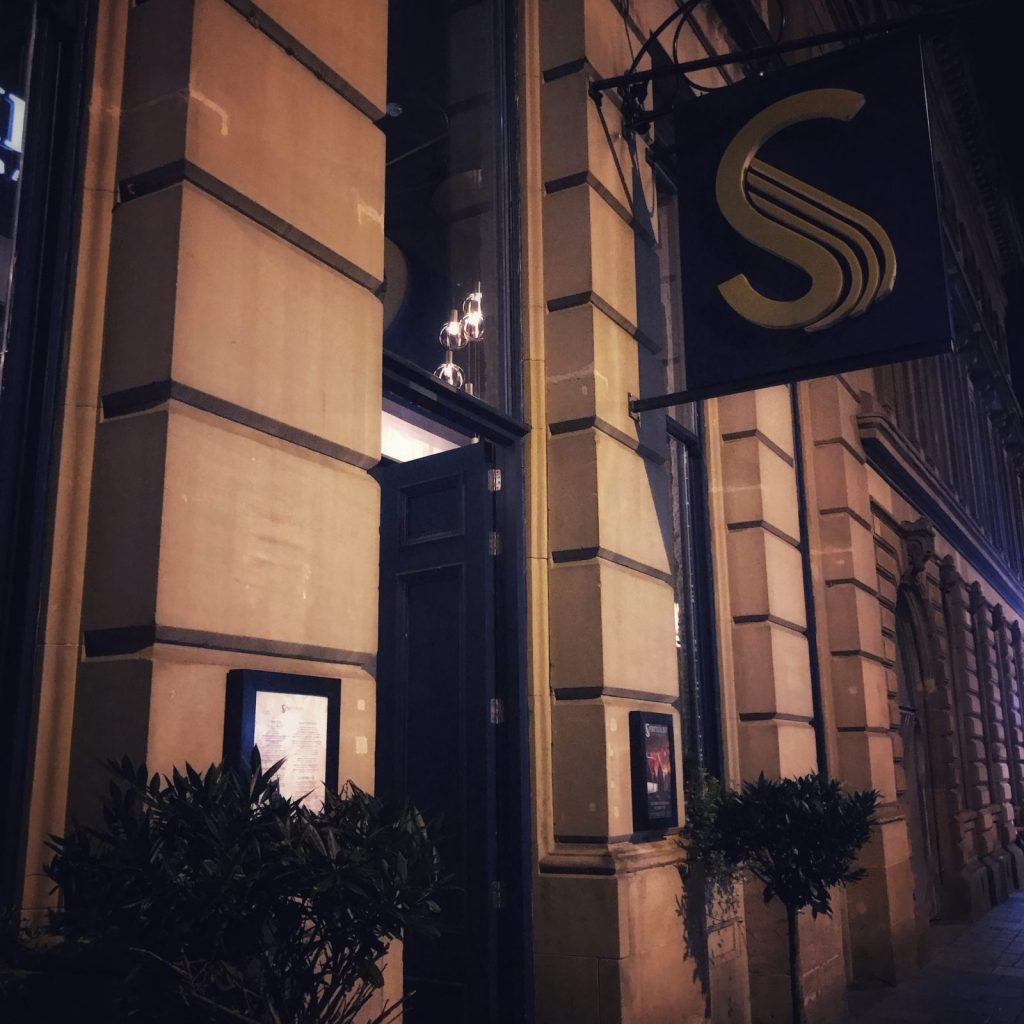 Scott and I had put ourselves on a lets-not-eat-anything diet for the day, in anticipation of the evening’s dinner plans. But that only lasted till midday, when we delved into Costa toasties. Flippin’ oops. Even still, when we arrived at The Spiritualist, we could have eaten many cows.

Get this A La Carte Started 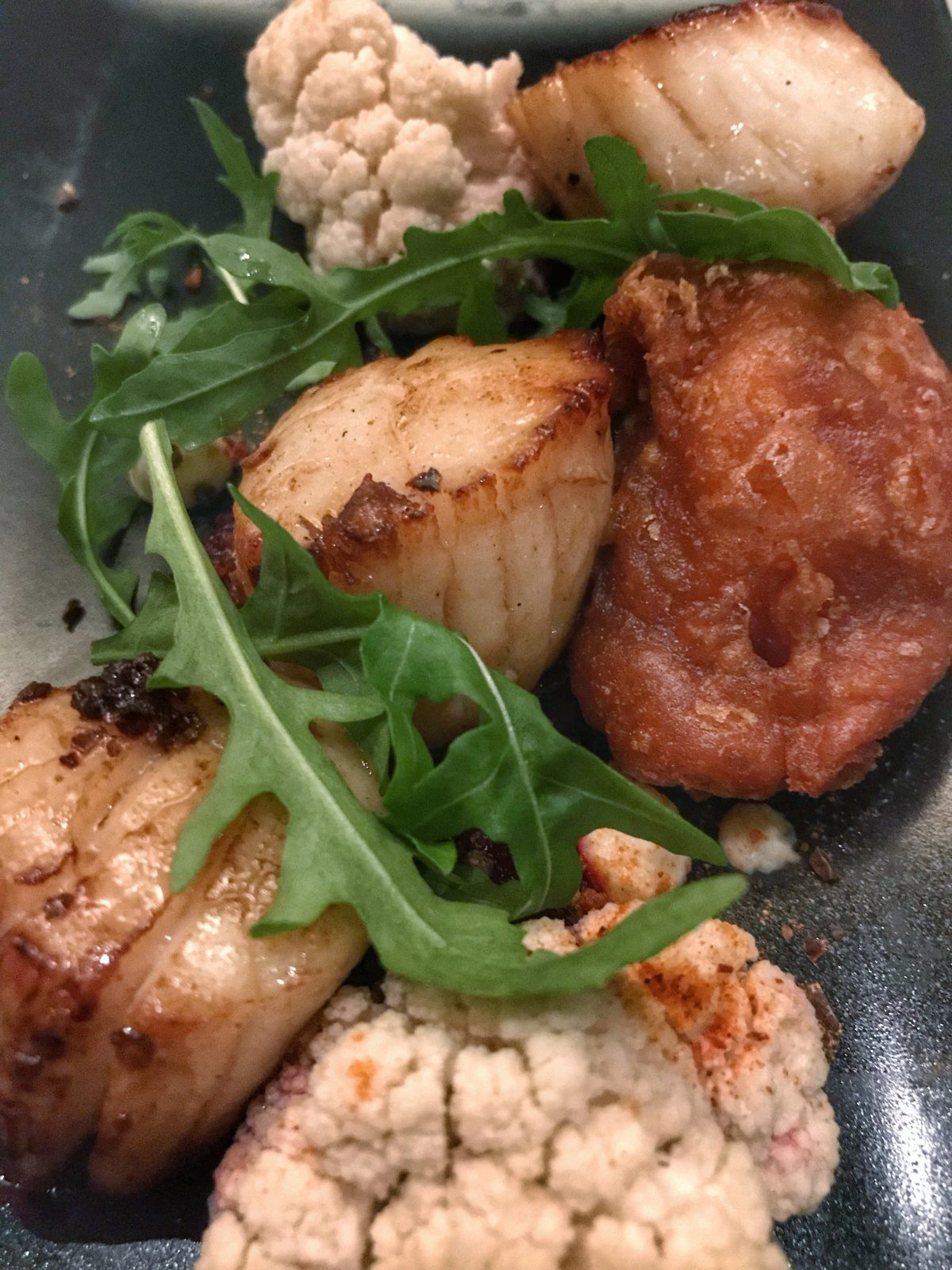 The starter was a good een’. “Een” means one in Aberdeen. I had Shetland king scallops with cauliflower three ways because who only has cauliflower one way anymore? This is 2018, and boy are we desperate to cook the same thing in as many forms as possible? But I don’t mind this. And cauliflowers (plural?) are relatively bland so they pick up flavour easily. Mine came pickled, battered and pureed, just how I like my men. What? 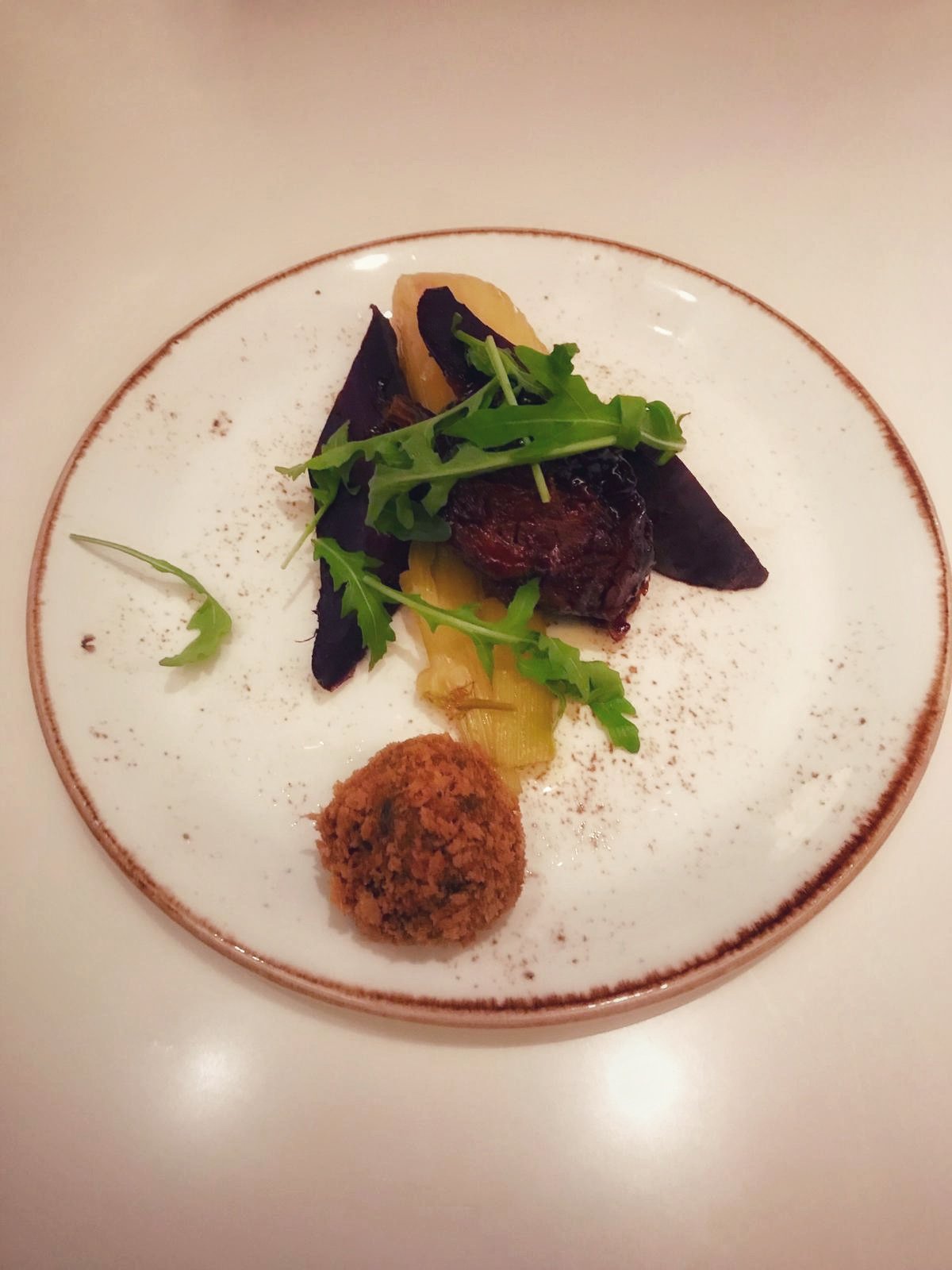 Scott had a pigs cheek. Which I tried. And it reminded me of pulled pork, and I guess if it was taken off the face of a pig, then technically it is pulled pork. His cheek came with a slap of aniseed jus and a black pudding bonbon. Both courses were top dolla. Although, not sure how big a fan I am off pickled cauliflower. Although in saying that, I would definitely still order this starter again so I can’t be that bothered. 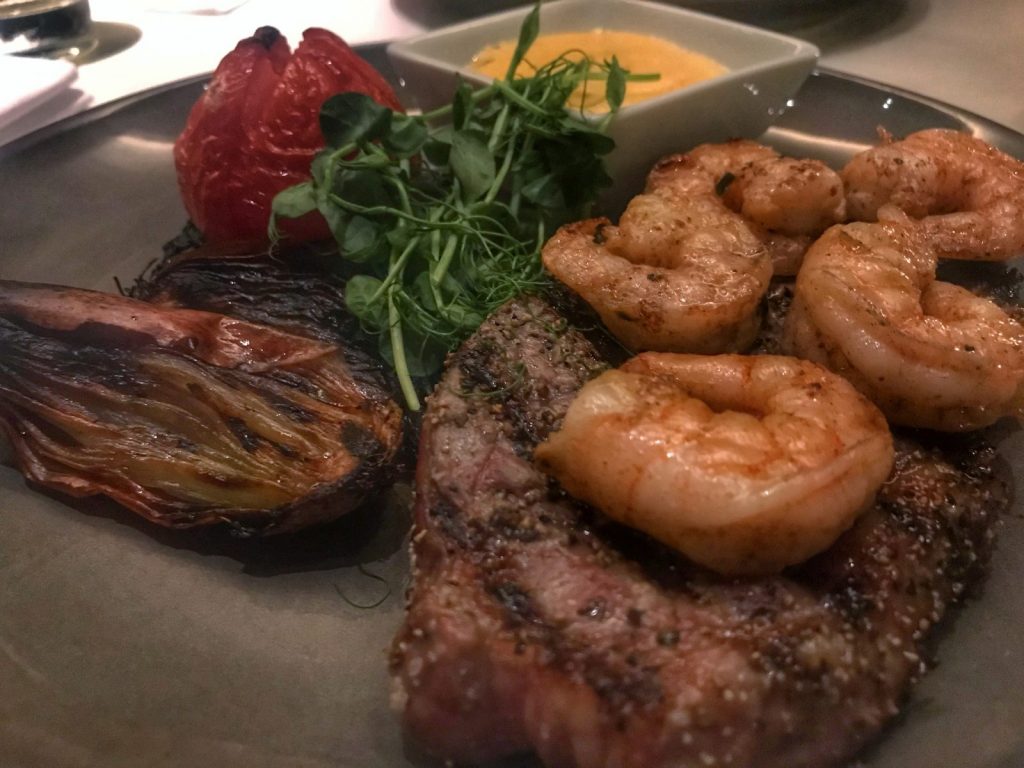 I ordered a surf’n’turf sirloin steak, rare as the day it mooed and served with bearnaise sauce, a ridiculously well-seasoned mushroom and a helping of fat chips. And I can say with full confidence that this steak was and still is the most flavoursome steak I have ever eaten. So yes, I’m looking forward to round 2. It’s just a shame that Glasgow isn’t in Aberdeen. 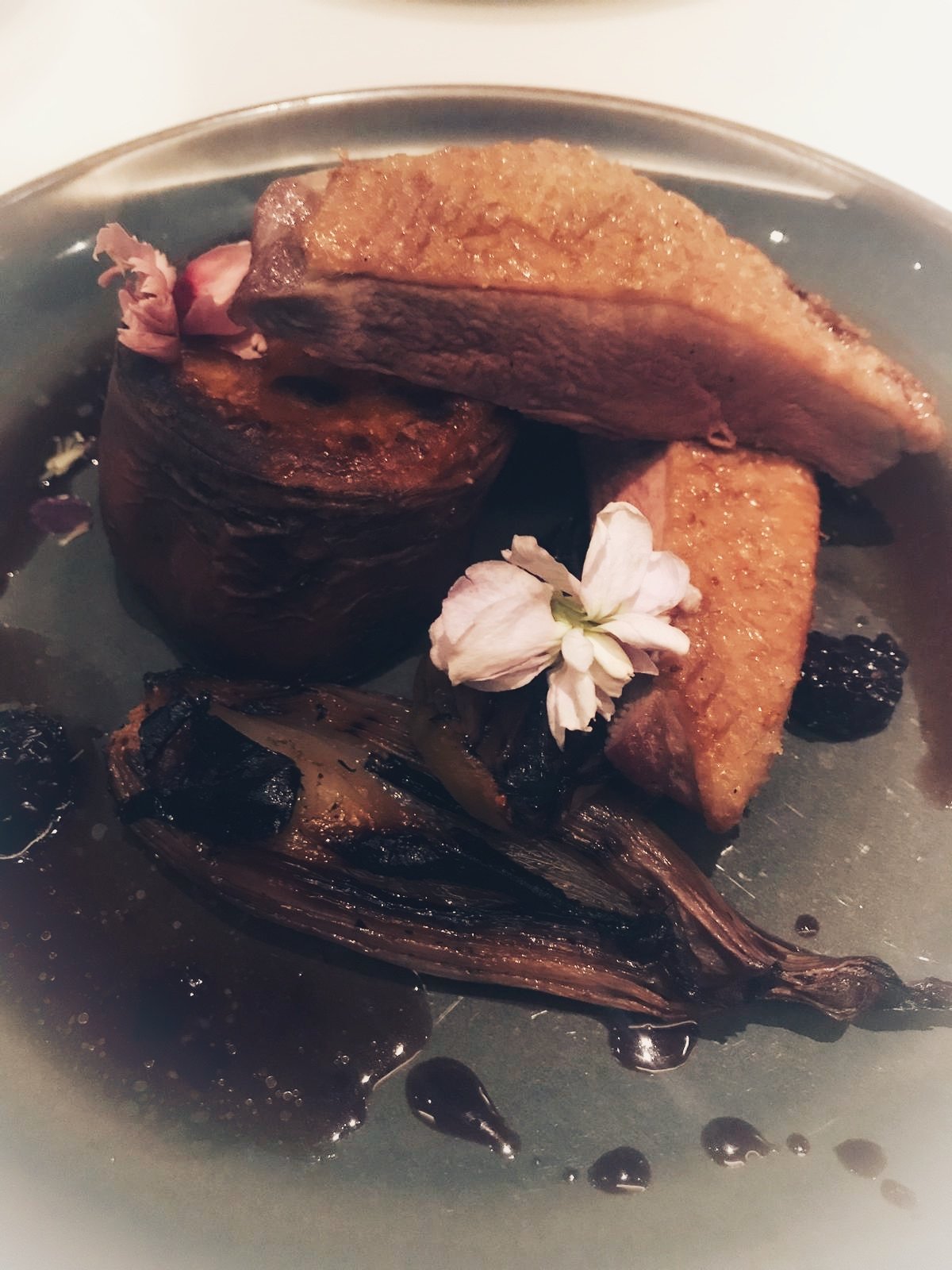 Scott had a quacker of a main. Duck. More specifically, breast of Gressingham duck served with fondant sweet potato, shallots, cherries, and cumin jus. And to put the cherry on Scotts duck, it arrived pink. Scott had never had pink duck before but he absolutely loves uncooked food. Literally, he would eat seagull tartare if it was a thing. And if there is anyone more suited to living in the wild, it’s Scott.

Pudding it out there 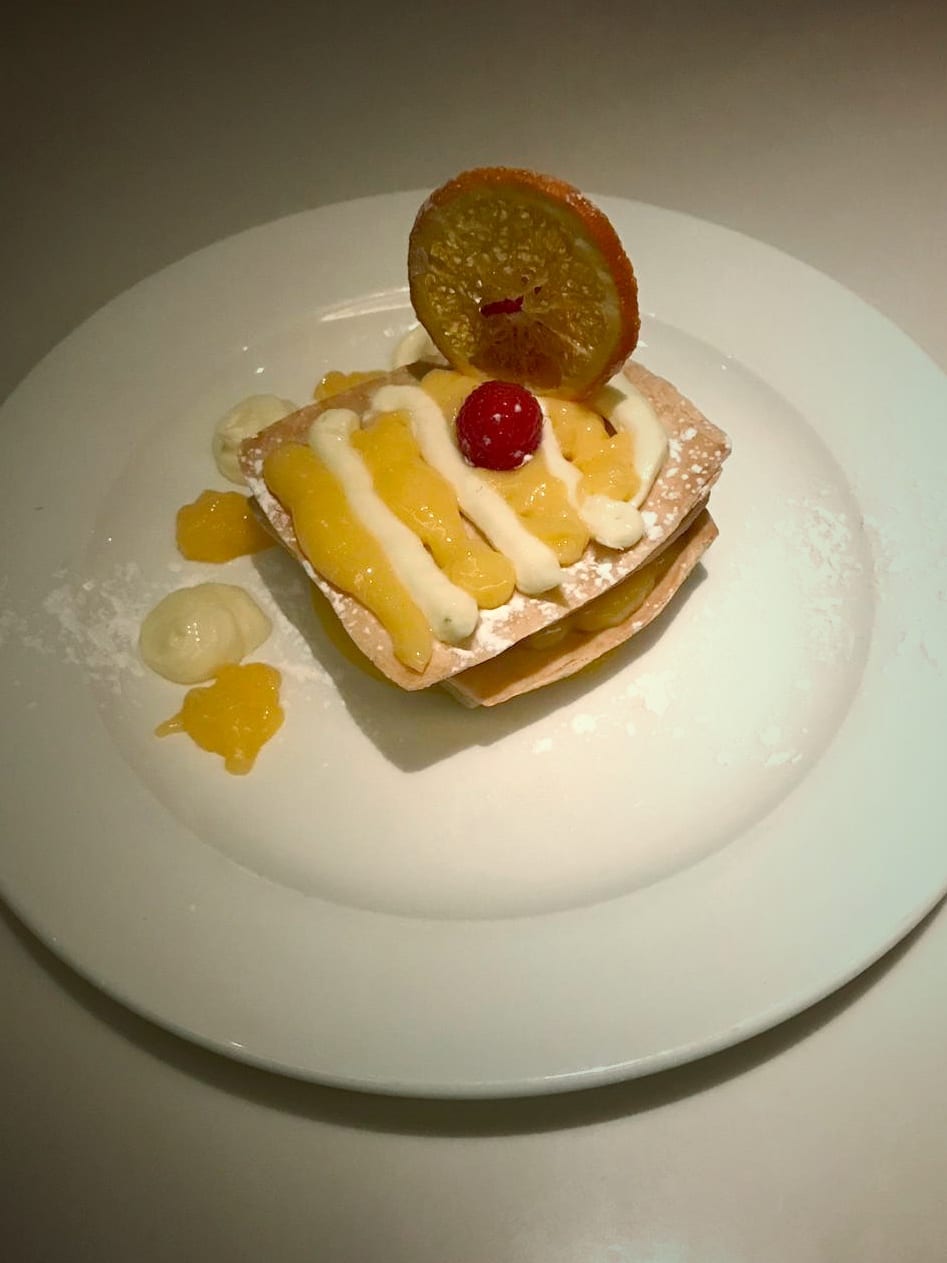 By this point, I was a boozy fairy. But I feel like the cocktails need their own explanations so that can wait. However in saying that, we did kind of have cocktails for dessert. Cocktails with cocktails. We like to order two desserts and share them (or more specifically, I do) because then we can try each others (I can eat Scotts too). I ordered a cocktail party which yes, is an actual thing. And oh my days, wowza. Scott ordered a mille-feuille which comprised of passion fruit posset, lime cheesecake, compressed lime crisps & lemon curd. We split the whole shebang down the middle and oh lord. Heaven is a place on earth. 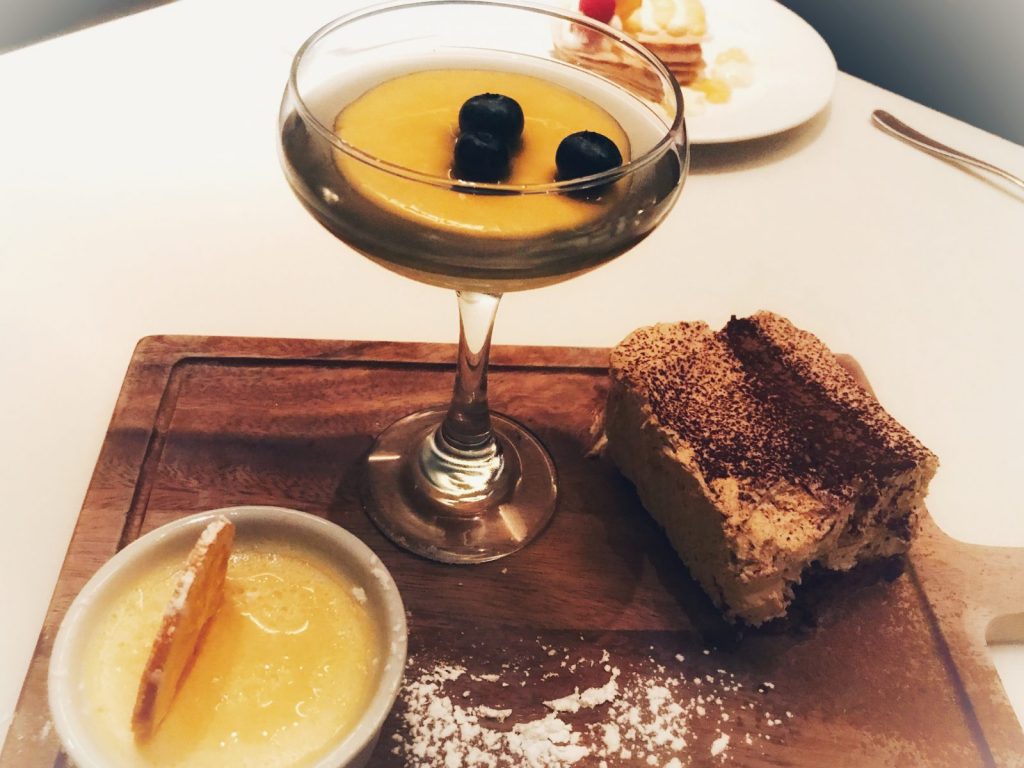 And this is the part where it all went Pete Tong. Although, amusingly, I was only drunk for about 90 minutes because I then came back to the hotel and wrote a blog post that only had a little bit of tense confusion. So these cocktails are great for not leaving you feeling like a pile of goo the next day, or maybe I stopped just in time? I’m also writing this on a bus (aye, not physically writing on a bus), whatever, you know what I mean. Anyway… Meet the hottest band to hit The Spiritualist since I was born: The Cocktails. And boy, were these cocktails SOMETHIN’ ELSE. Lordy me. 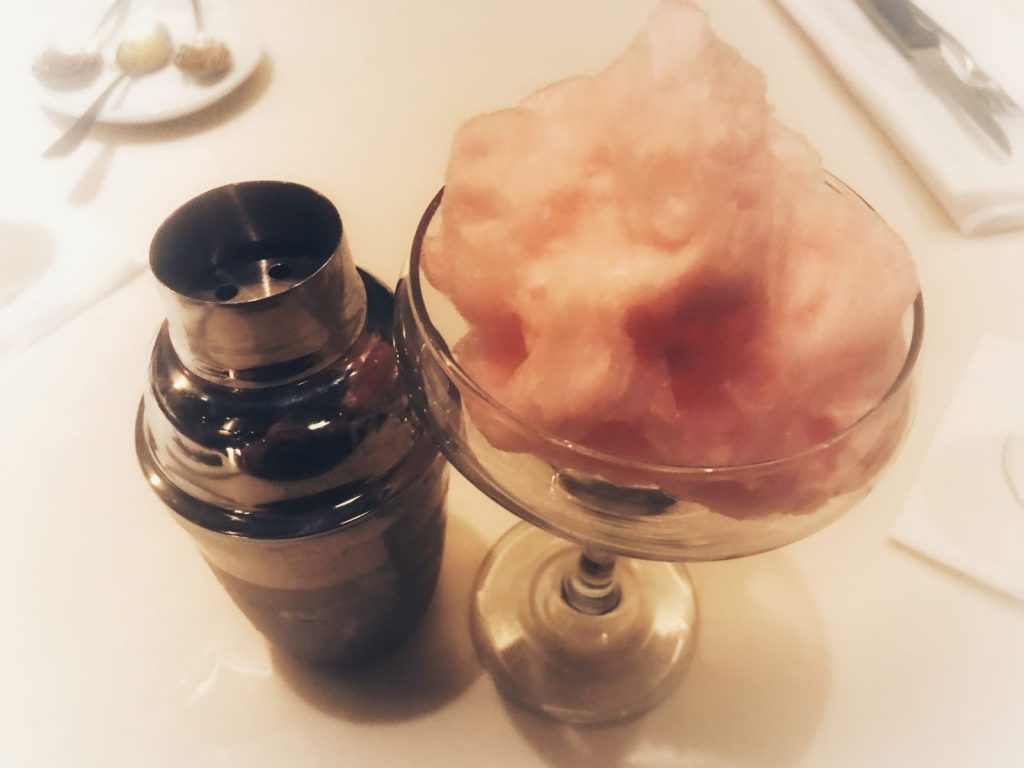 So first up, we have a “Dazed at the fair” daiquiri, poured onto a bum full of candyfloss. And the best daiquiri I have ever had. 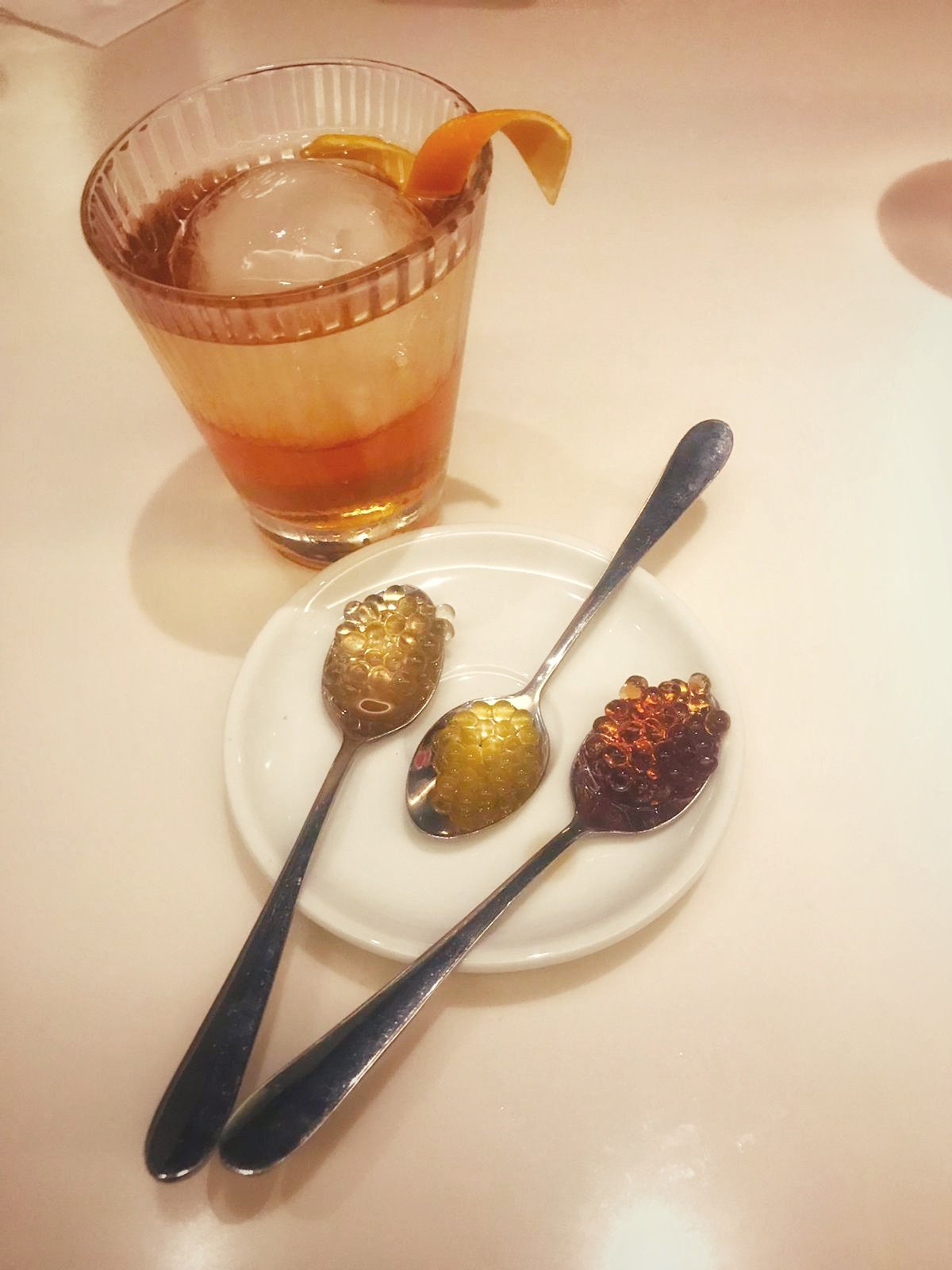 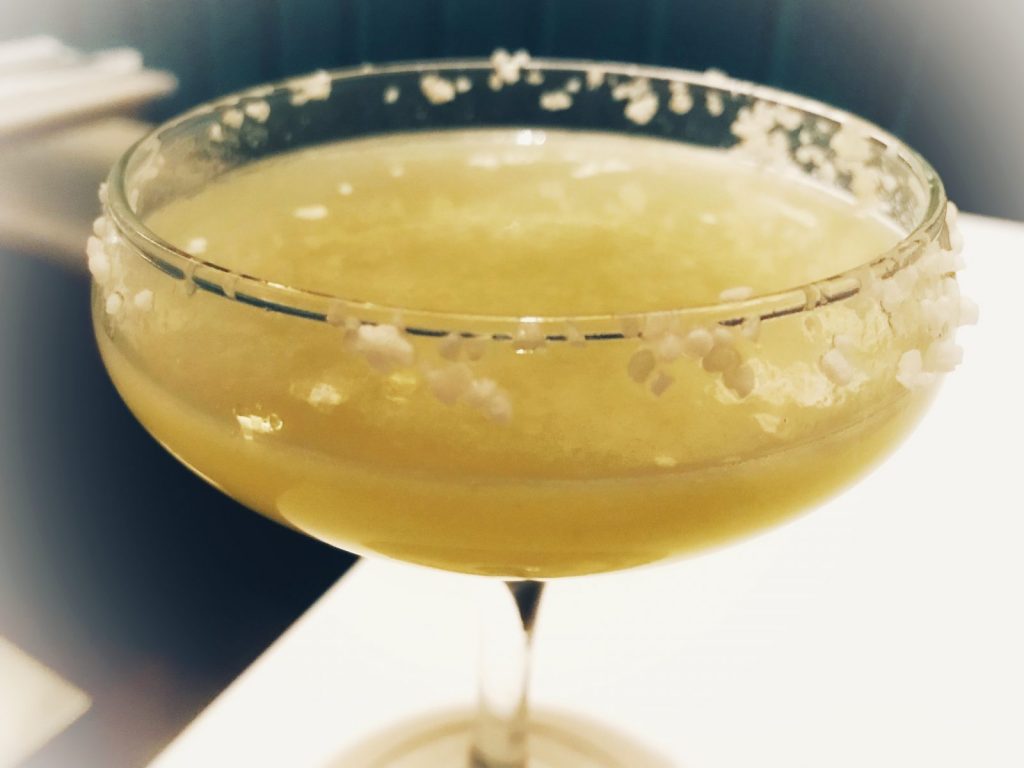 Last (thank god too because Scott was disowning me by this point), I had a Snap, Apple & Pop which was a rather-odd yet refreshing combination of tea, mint, apple juice, gin and crackling candy. I said to Scott at the time “If this was what green tea tasted like then I would drink heaps of green tea.” 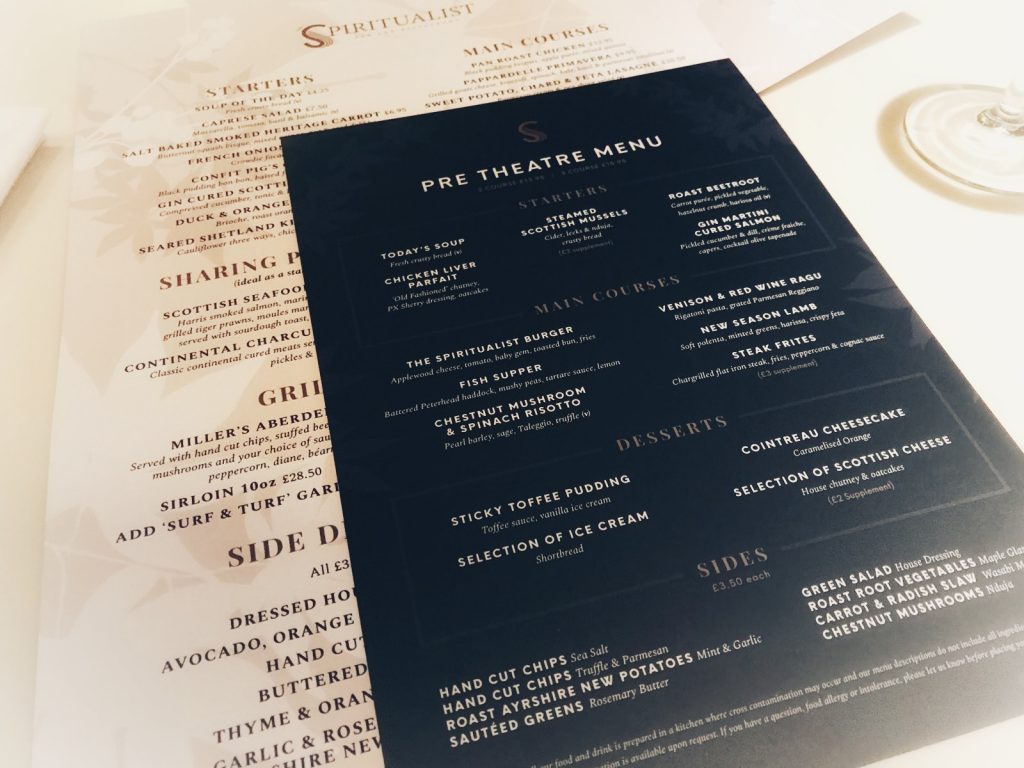 Scott has said that The Spiritualist is one of the best places he has eaten. And I completely agree. Friendly service, great atmosphere, fantastic food, and an unbelievable cocktail menu, with something for everyone. The Spiritualist also does a great pre-theatre menu, which we arrived just a tiny bit too late for, but it looked lovely and offered 3 courses for £15.95 which is a great offer. If you’re popping to Glasgow and fancy checking out this culinary gem, you can see their menus here.