An afternoon in Chapelton

We were recently invited along to a rather cosy little event in Aberdeenshire’s newest and prettiest addition. Chapelton is a teeny weeny town near Stonehaven with big boy plans. Behind the classy venture are the Duke and Duchess of Fife. If you’ve never been to visit the homely beauty, expect classic picket fences and Georgian inspired windows. They have even gone down the route of adding a red telephone box to their town square. I for one, am seven shades of in love. Could this be the perfect place to live? Chapelton is the true definition of classy, tasteful architecture with an undeniable air of Scottish.

I love a day trip. I am a day tripper. Just like those older folks that go for the obligatory Sunday drive, I enjoy a change of scenery and a good old afternoon tea. However this afternoon tea was less scones and cucumber sarnies, and more chocolate and champagne. Did you even hear me complain? 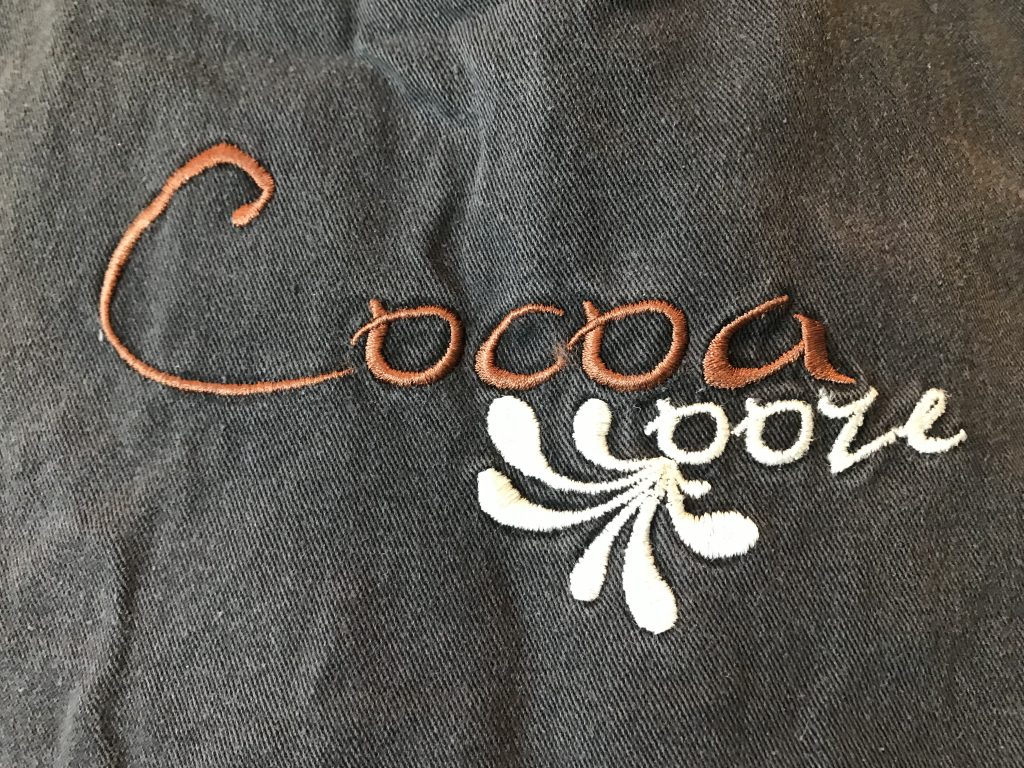 Cocoa Ooze are one of Aberdeenshire’s infamous bragging rights. That is because there ain’t no chocolate like Aberdeenshire chocolate. I wouldn’t be a local if I didn’t ask could chocolate be the new oil..? Behind Cocoa Ooze is a force to be reckoned with. Jamie Hutcheon has earned his success to date through peddling premium cocoa to the North East which has been greatly received. He also had a stint on BBCs Dragons Den, to which he banked a cheeky little investment from fashionista Took a Sillyman (I could have googled how to spell it but am I not welcoming you into my thoughts?) 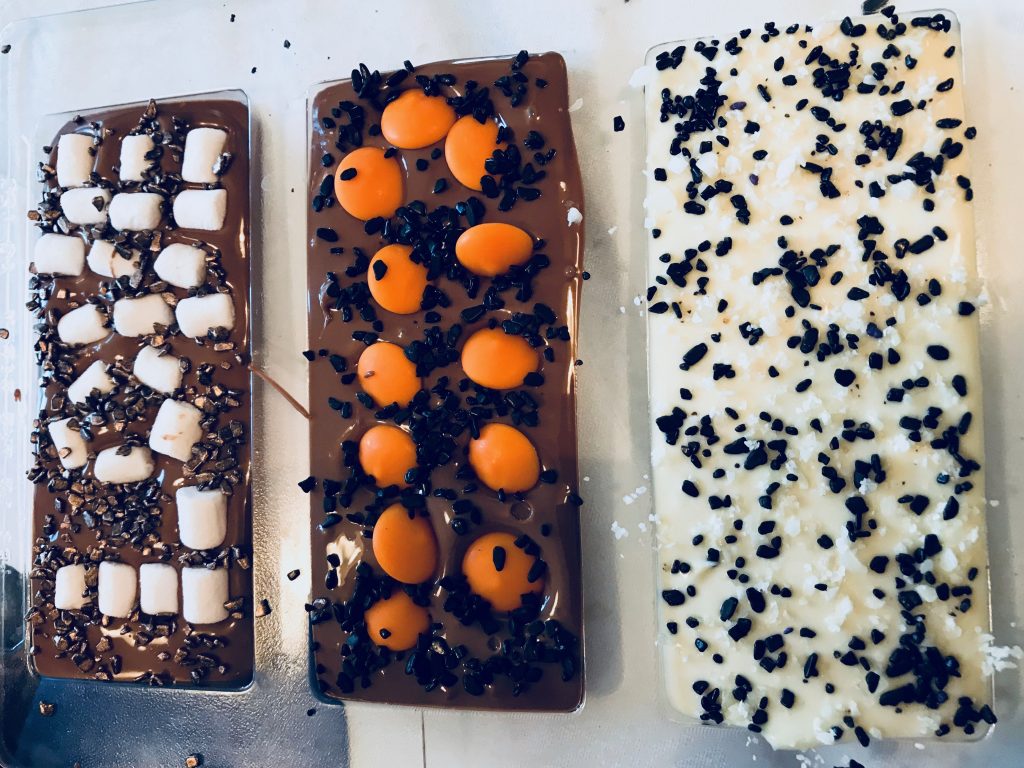 Upon arrival in chez Chapelton, we weren’t entirely sure where we were going. The truffle making course was to be held in ‘The Cabin.’ We breezed right past the cabin in a typical needle in a haystack manner. However, the cabin couldn’t have actually been easier to find. For those of you who are also logistically challenged, it is on the right hand side as you drive into Chapelton. I am just short sighted, long sighted and not very well sighted. Thankfully we arrived with around 3 minutes to spare. To which we received a very warm welcome from Jamie and his accomplice for the day.

We joined a table of 4 other keen chocolatiers (and drinkers by the sounds of it). In these events, the company can go one of two ways. At our table, was cheery chatter and houses on fire. Scott as per usual was the only man at the table. I used to feel sorry for him before realising that he usually comes away from these events with goodies and a grin. Besides, he actually turned out to be a talented piper (more on that one later…)

If you want to view paradise… 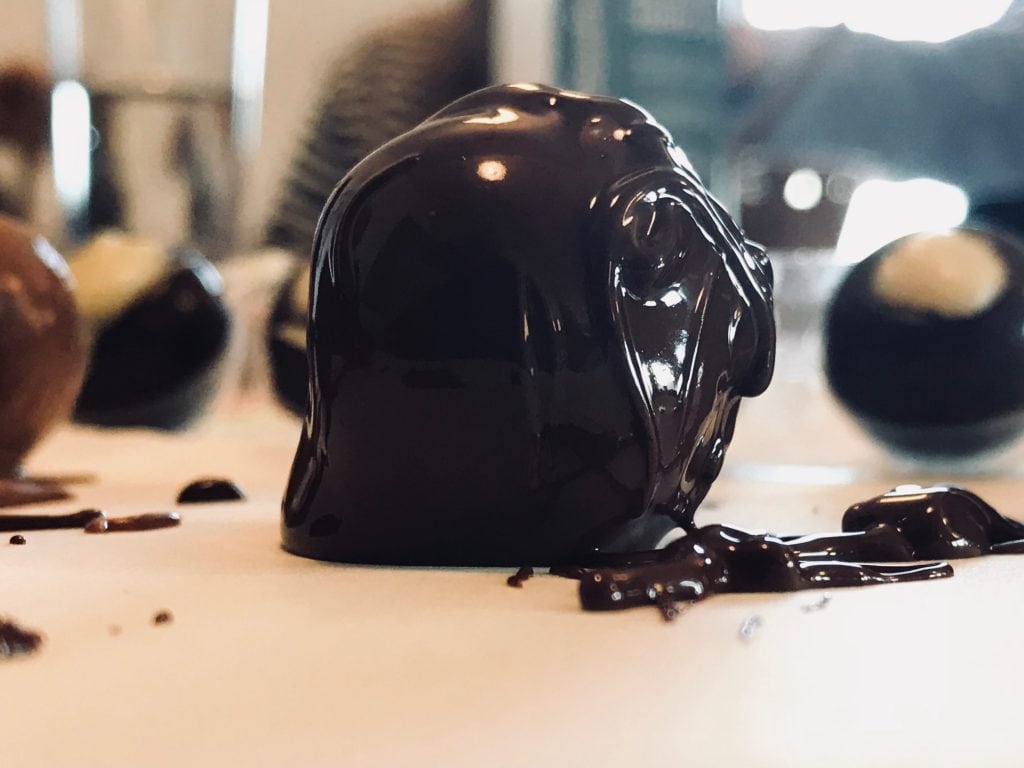 On every table was a small dish filled with milk, white and dark chocolate buttons. This was to let us all pick which was our favourite. I have never really discriminated against my chocolate (or booze) choices and found this a task. After tasting each kind a good few times, for research purposes, I went with white. Our company, being superior, also made things easy and picked white chocolate. 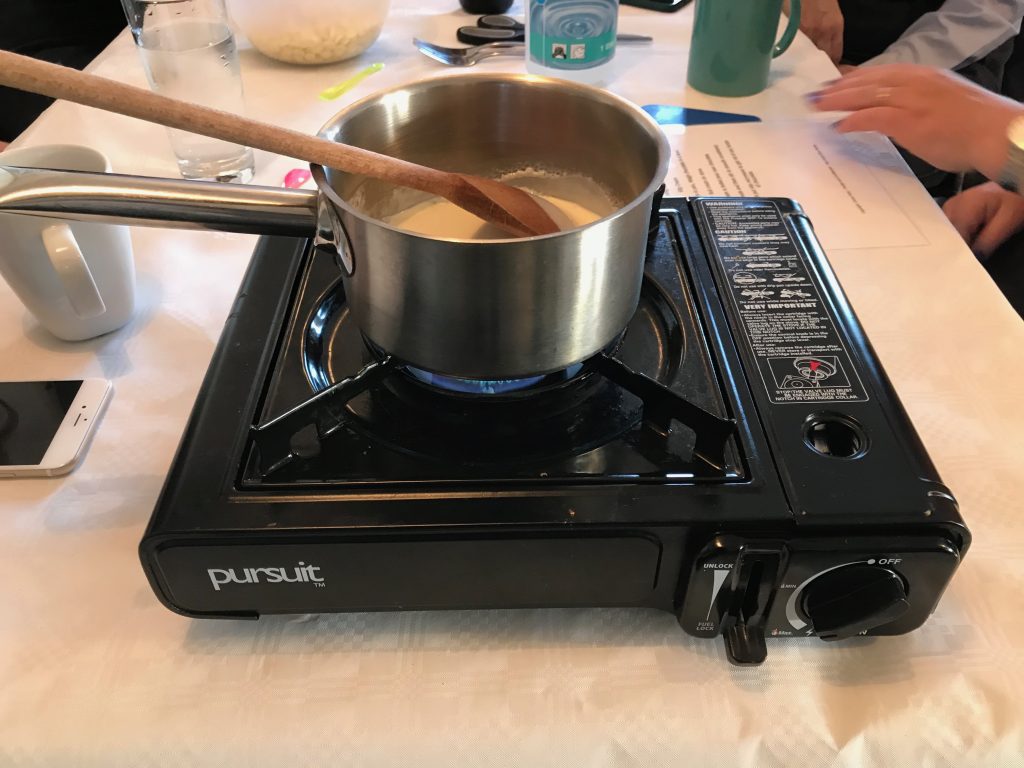 We were then tasked with boiling cream and adding the copious amounts of white chocolate. Once the mixture had been stirred and looked like a gooey ganache heaven bowl, I eat the whole lot and we all went home. The end. Goodbye.

But where’s the fun in that? 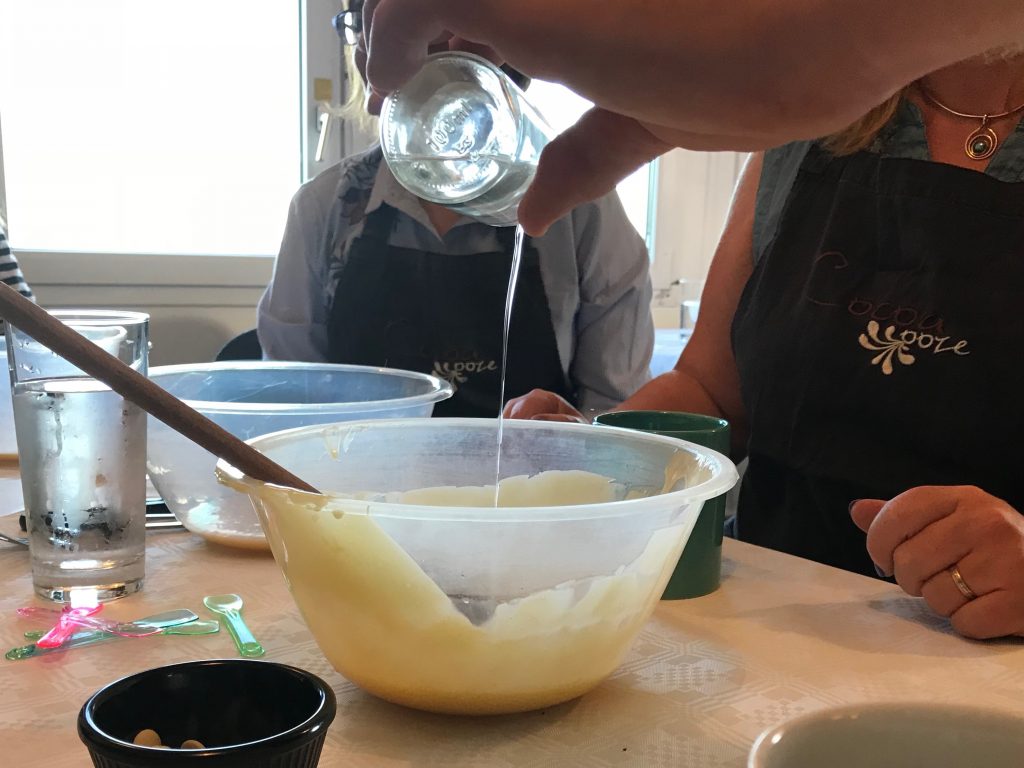 We then had to pick flavourings. Cocoa Ooze had brought along a wealth of different flavours including anything from citrus fruits to champagne and cointreau. I’ve already hinted severely at one of our key ingredients and I guess it doesn’t take s rocket scientist. Not to be a champagne but, well, yeah, champagne! And lots of it…

Seeing as we were all festive fellas, we also picked ginger, which paired perfectly with my Rhubarb and Ginger Edinburgh Gin liqueur later that evening. We also put some lime in the coconut chocolate mix.

Are you a good piper? 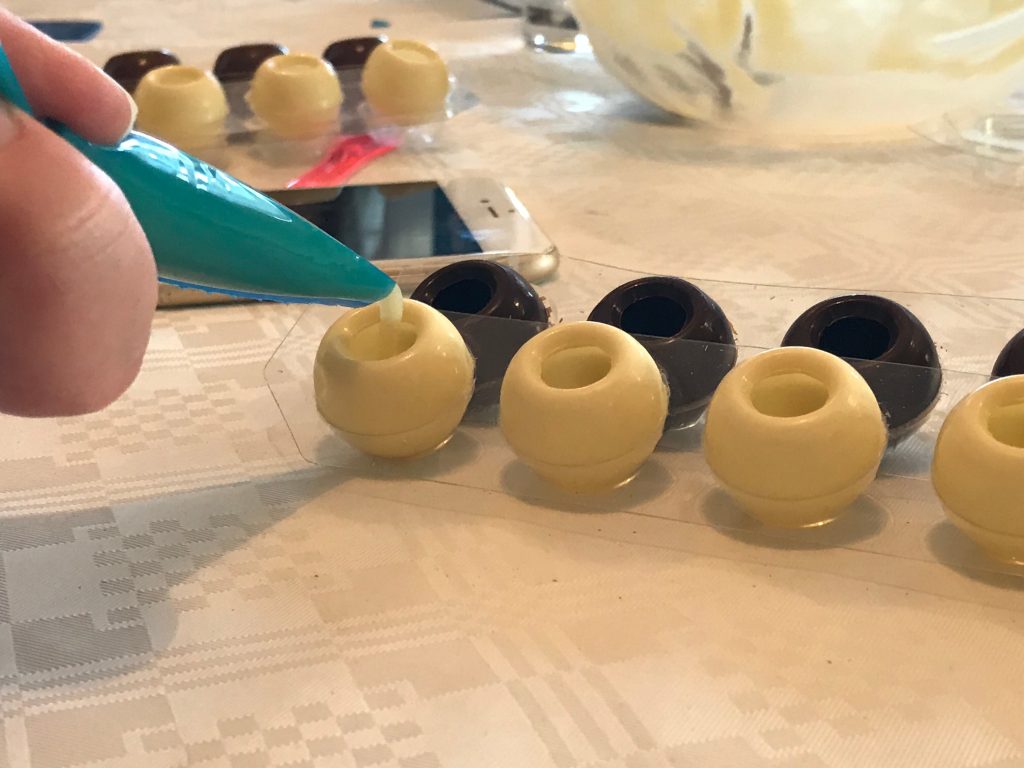 Well I did take one saxophone lesson in school but the instrument was way to heavy to carry home from school each day and… Sorry, did you not mean bagpipes? Out popped those bright blue cone bags that you see on Masterchef and pass judgement on. In order to get our ganache into the little chocolate casings, we had to use the cone bag. Yes it looks so easy but in life, I’m pretty sure I ended up with some on my knee. Everybody else at my table seemed to have mastered piping by the time we were finished and I could have won an award for most clumsy, most messy chocolatier. I blame my rugby ball shaped eyes (which is actually an opticians diagnosis and even though my eyes look normal-ish, they actually have a hidden agenda).

By this stage in the game, I would of quite happily have taken my chocolates home (to the car where I would of eaten all of mine and six of Scott’s), however they still needed to be coated in more melted chocolate and then loaded with toppings. Heaven must be missing angels. 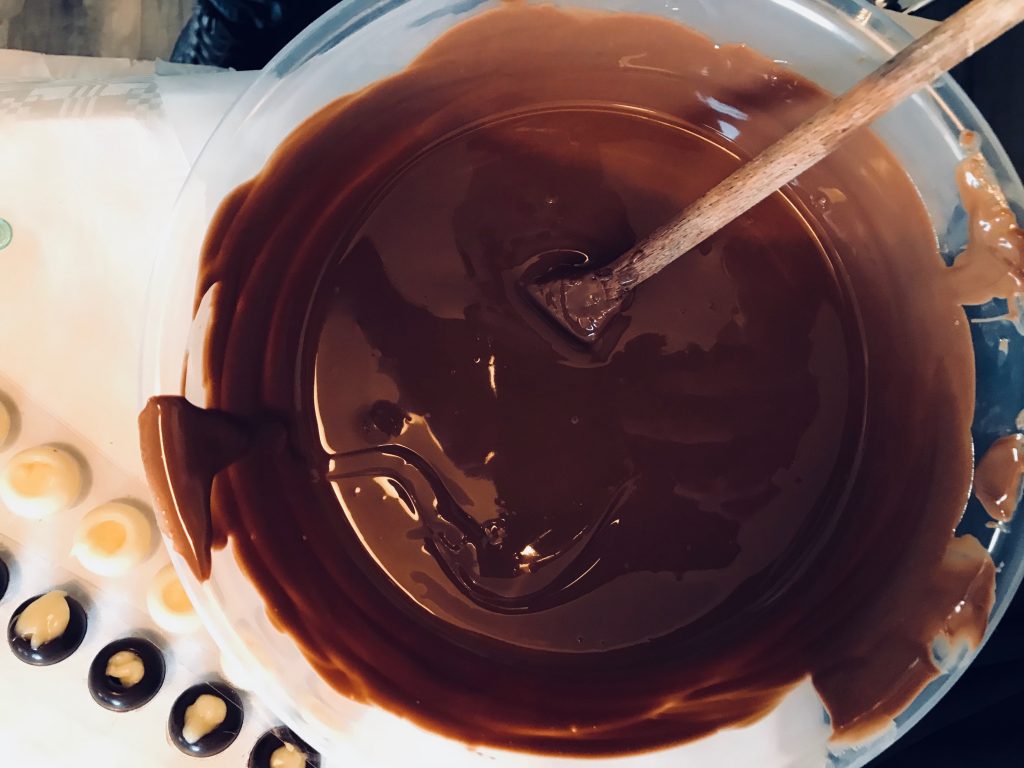 All of our table had made white chocolate ganache and then piped it into a variety of milk, dark and white chocolate casings. To add another layer to the sweet sweet loving, we had to dip our casings into the gooey goodness and then while they were setting, add toppings. One of the girls at our table went topping hunting and came back with a tray of yes please. Everything from popping candy to honeycomb to glitter was ready for our artistry. Moral of the story, don’t put glitter in front of ladies who are playing with chocolate and champagne. Secondly, don’t make glitter a free for all for clumsy bloggers like I. 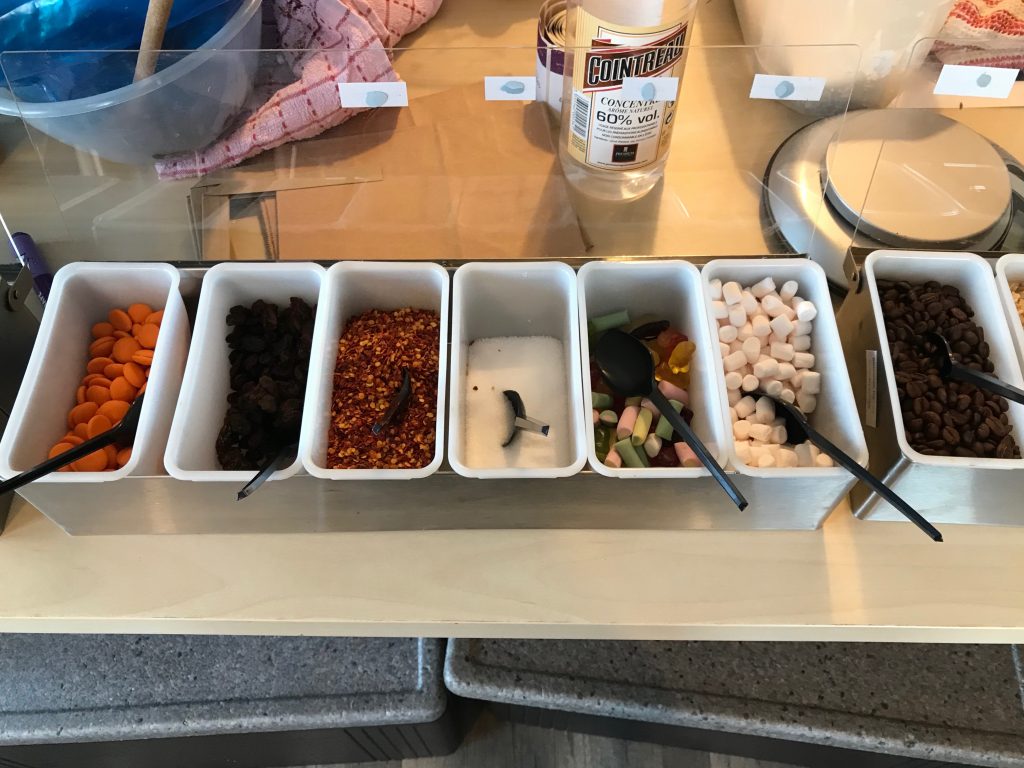 There’s one thing you need to know about my Scott. He doesn’t understand or really care about flavour matching. He does this at home quite frequently. For example, one evening he suggested that he make us lemon chicken. What resulted in this was a pot containing a whole chicken and a bottle of lemon juice. It wasn’t just bitter, it was harrowing. So in this scenario, he thought it best to pour chilli flakes on white chocolate that was filled with champagne ganache. He also added candied ginger, honeycomb, glitter and crushed almonds. All I can say is, if Willy Wonka is looking for a weird and wonderful test subject, I have the perfect contestant.

Cheers to chocolate in Chapelton 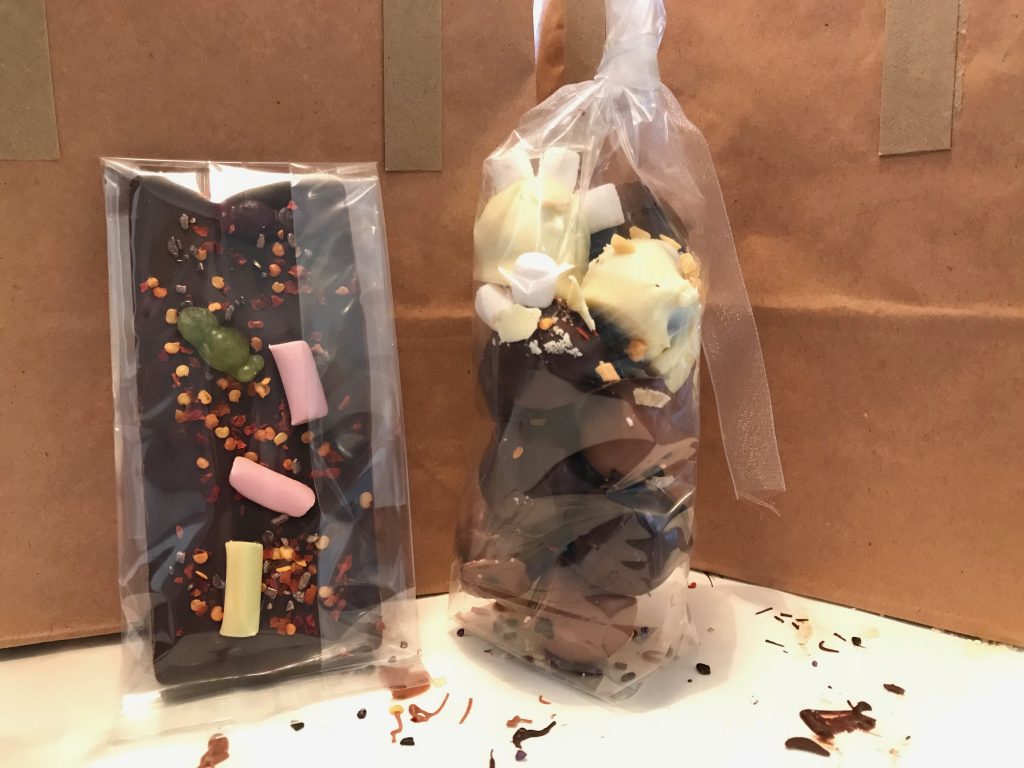 As the process was nearing an end, we were given little gift bags and ribbons to add the finishing touches to our chocolate display. I’m assuming this was for those who intended on gifting their goodies to friends and family. Unfortunately our chocolates didn’t make it out of our sight and by the time Saturday evening arrived, there wasn’t a trace of evidence.

Chapelton is a fabulous little place to spend time during the festive period, we particularly felt this during the Cocoa Ooze event. The next festive fiesta will be the Christmas Wreath Decoration on the 2nd of December. Keep up to date with upcoming events on the Chapelton website.