It was a dreich Tuesday afternoon in Scotland’s capital city. We had been in Edinburgh for 4 days and finally the day of departure was upon us, so we decided to go out with a bang. Edinburgh Gin has been causing a rather successful stir over the last few years and it was about time we got ourselves some of the action. So, before heading back to Faberdeen, we stopped by the Edinburgh Gin Distillery for the ultimate Edinburgh Gin Tour. There have been worse ways to spend a Tuesday. 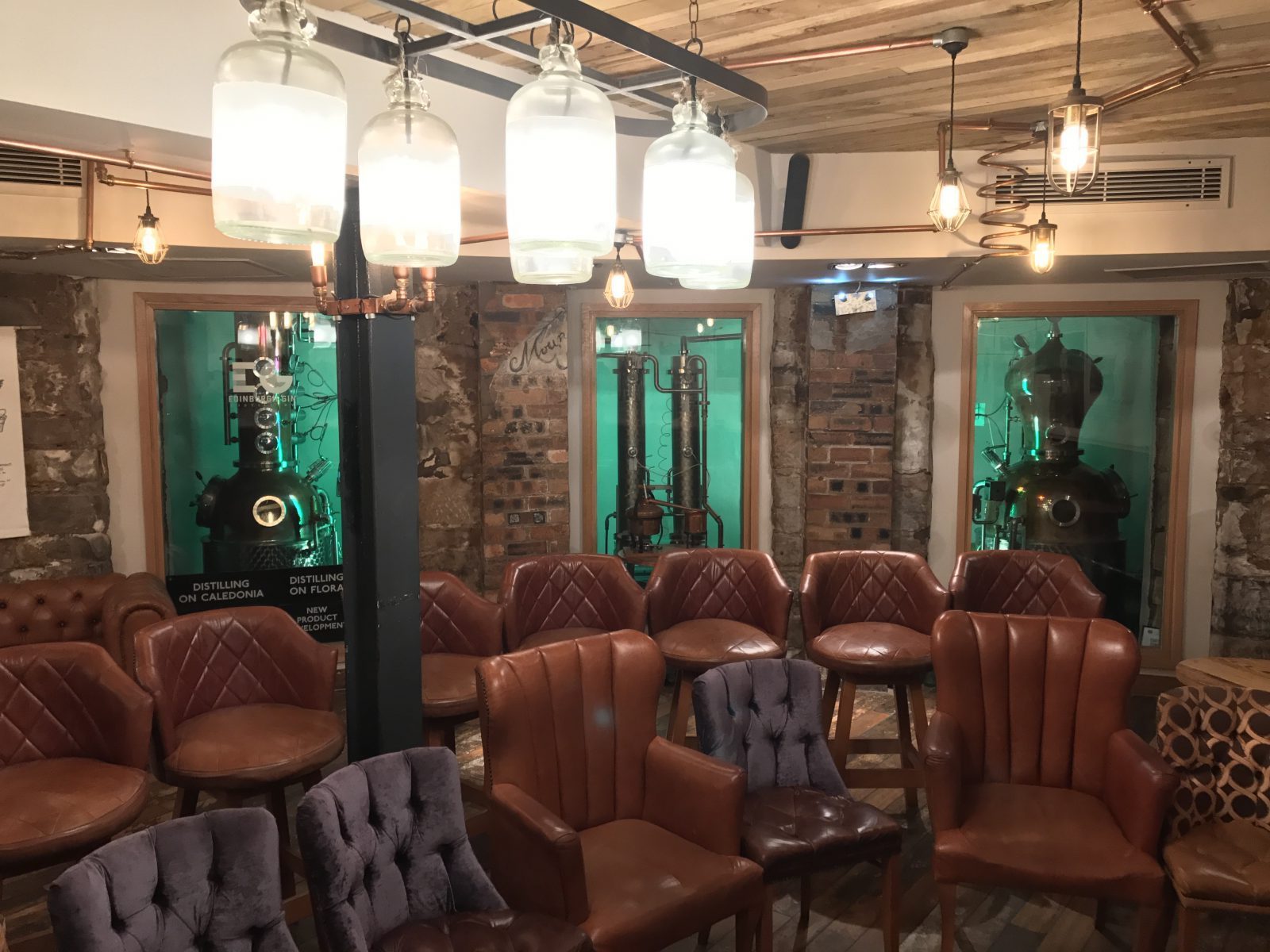 We have done lots of distillery tours and funnily enough, each one is different. They may all have a similar premise but their stories always differ and the tour experience is always unique. The Edinburgh Gin Tour is held in Heads & Tales Gin Bar in Edinburgh’s West End. Heads & Tales is one of the best places for cocktails and gin tasting in the capital, making it one of Edinburgh’s most popular tourist attractions. The tour is humorous, interesting and well, you get to take part in a mega gin tasting so, who’s complaining?

For 3 hours, I became Alice and the Edinburgh Gin Distillery became my Wonderland. Scott became the rabbit. A rabbit who didn’t hold back in hurrying me down the rabbit hole away from all the hustle and bustle of Edinburgh’s West End. Upon discovering our new surroundings, we were asked to take a seat in a quirky, old-fashioned and definitely haunted little lounge whilst we waited for our Mad hatter host. We have been back to this lovely little gin bar a few times since. Once, for a gin making experience and again, to taste the different types of gin. Just in case we had forgotten…

Whilst we waited for the gin connoisseur, we were told to help ourselves to glasses and bottles of gin. Unfortunately, some cruel person had drank all the gin and replaced it with water. The water, however, was a great starter due to the heat and the upcoming tastings. As we were travelling back up to bonnie Aberdeen and due to my PITA (pain in the ass) travel sickness, I made Scott aware that I wasn’t going to be taking part in any of the tastings… The road to hell is paved with nice guys with good intentions. 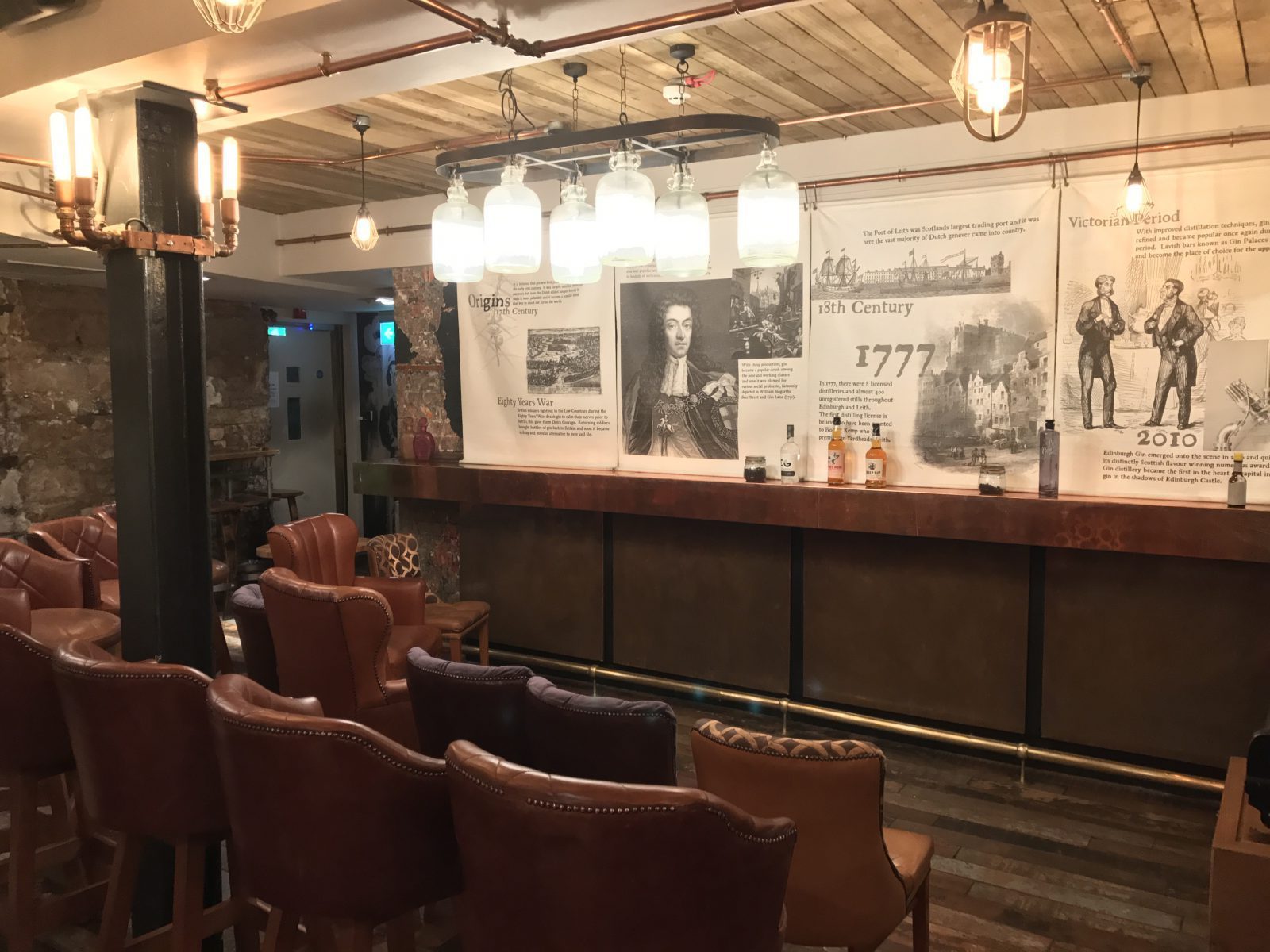 Hannah, if you are reading this, we don’t really think you are a mad hatter. However that being said, you were absolutely the hostess with the most-ess. Hannah was our ringleader and the gin connoisseur in my glorious downfall. She came to our haunting den and summoned the troops who were more than keen to follow the leader on the ginbound journey.

How did it all be-gin?

Hilarious Hannah knew her stuff. What she didn’t know about the history of gin wasn’t worth knowing. I wouldn’t want to spoil the Edinburgh Gin tour for all of you as I know you are already on your way to booking but here are some teasing titbits.

The English helped the Dutch in the Dutch War of Independence. Never ones to miss an opportunity, they soon picked up that the Dutch were necking something strong before going away to fight. This was to give them a little bit of DUTCH COURAGE. We bloody love an interesting story behind an age-old phrase. This is one of best we have had so far.

The English weren’t going to let it go and after a whiff of the courage, they needed to know it all. What was this Dutch Courage and what was it made off? Genever is a malt barley wine made with juniper berries and is seen as the granny of gin. The Dutch must of had a short memory back then as they wouldn’t tell us what they put in their Genever. Nobody knew how to pronounce it either, so it was shortened to gin and the rest is history.

King William III or William of Orange came to the throne in 1688. He had high hopes for gin to be the nations drink and therefore banned French exports and relaxed drinks distillation rules. Relaxed is one word for the madness. His new rules (or lack of) meant that any average Joe could make gin in their sitting room. The only rule that was applied was that those who thought themselves as gin connoisseurs would have to put a piece of paper on their door for 10 days. This was to let all of their neighbours know about their new venture. If they received no objection within the 10 day period then they became yet another gin distiller. We definitely haven’t started distilling Cruden Bay gin… However, if we had, then so far it has been 4 days and we’ve still had no objection.

We weren’t really off to a good start. The gingredients to produce the perfect gin were becoming all the more eclectic. Distillers tried rosewater and even turpentine. We couldn’t dilute our ratty recipe either as the water at the time was far from sanitary. 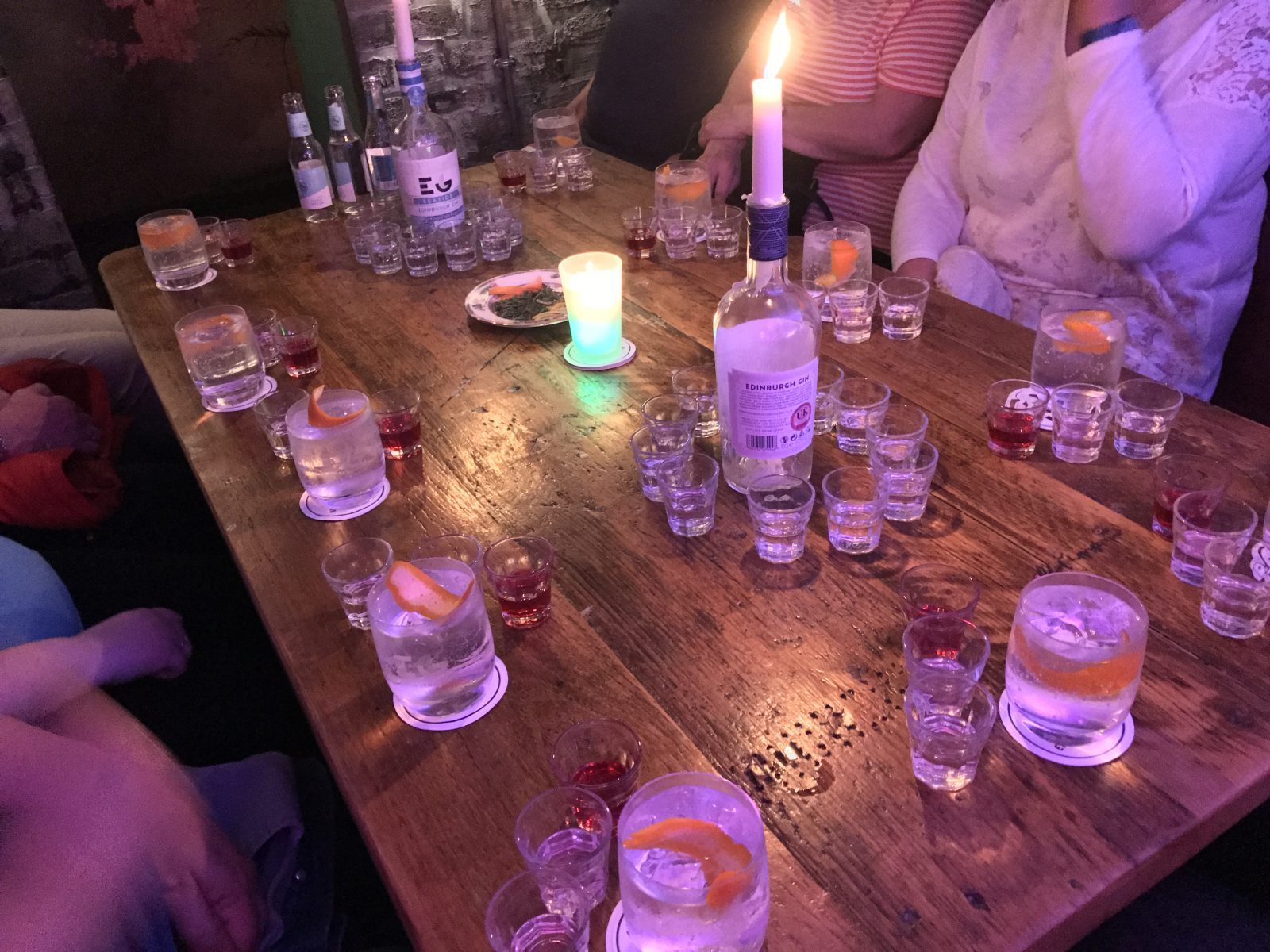 Before the gin craze, we were drinking beer out of tankards. Other than the occasional drunk, our only problems were beer bellies. When gin came arrived the scene, we were clueless on how to drink it and so we replaced the beer in our tankards with 88% gin.

So, how did gin become so glamorous?

Edinburgh Gin spilled the peas on this one too! In the 18th century, sailors were known for drinking rum. They still are. Back then, the navy officers thought themselves to be above the rum-drinking sailors, so they took to gin. Barrels onboard the ships contained exotic fruits such as quinces and limes and the deadly-yet-drinkable Angostura bitters. The navy officers began to explore something other than the seas and in turn, changed the way we drink gin today.

James Bond is perhaps the most famous drinker in big screen history. His famous Martini has paved the way for glamorous boozing over the years. When Ian Fleming was writing his James Bond phenomenon, Mr Bond actually consumed gin in his Martinis. However, when the films were rising to fame, a very well known Russian vodka brand paid a lot of money for their drink to feature in the cocktail. Cleverly, their product is also strategically placed in the background of some scenes. Product placement at its finest.

Edinburgh Gin contains 14 weird and wonderful botanicals. Hannah the Great handed out jars of each of the different botanicals for everyone to see, smell and in some cases, taste. Some of my favourites were; mulberry, cassia, milk thistle seeds, and lemongrass. To find out about all the other gingredients, you are just going to have to pop along for your own Edinburgh Gin Experience. 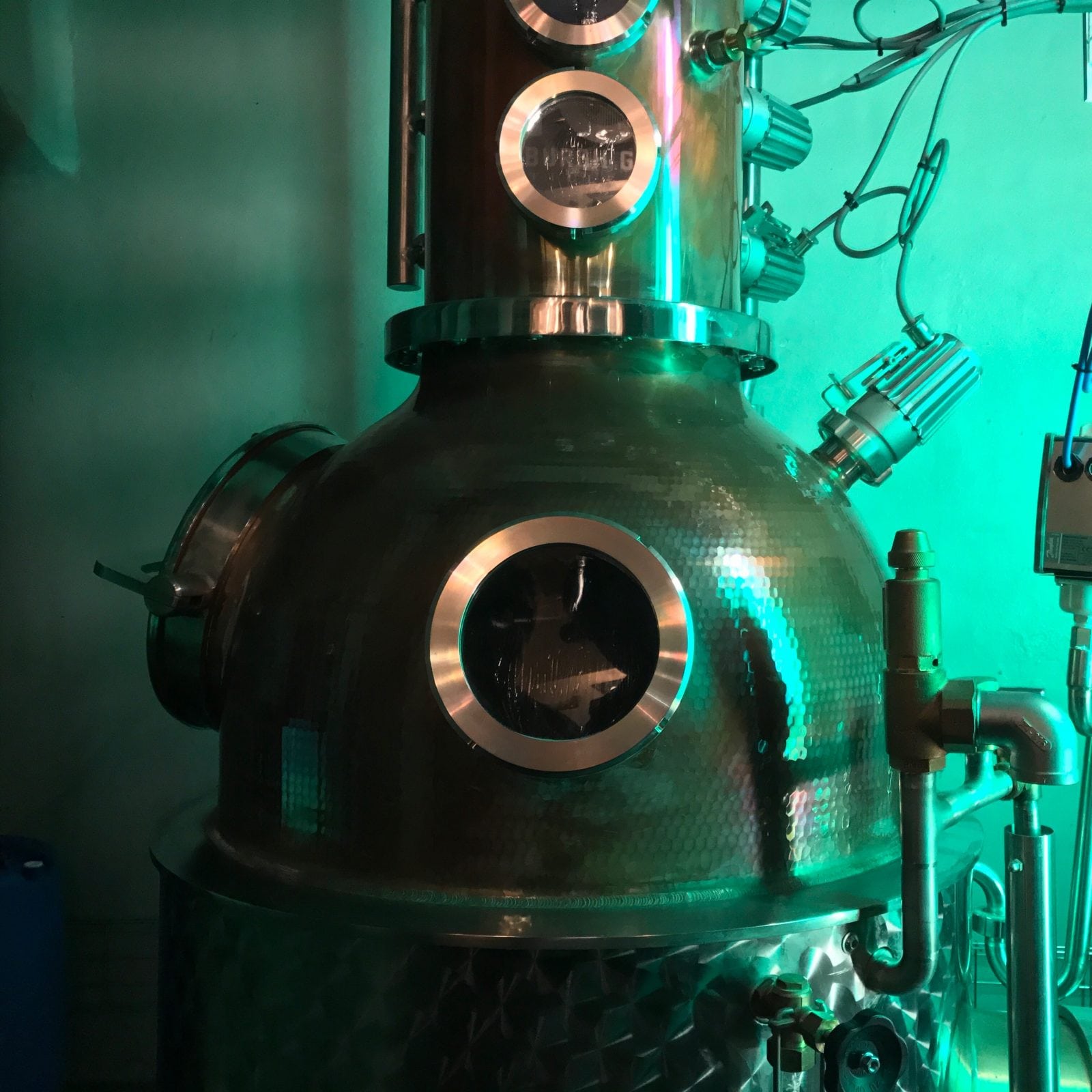 We were shown two of the most famous stills at Edinburgh Gin; Caledonia and Flora. I related to Flora as she was also a very curvy lady, laden with copper. There is also another sassy still at their Leith distillery known as Gin Genie. This is where they make the bulk of their boozy goodness.

The Gin Connoisseur tour consisted of an informative, entertaining and hilarious class in gin history and a scientific stroll through the Scottish stills. To top off the ultimate Edinburgh Gin Tour, they sweetened the crowd by taking us into a cute, candle-lit underground booth, with glasses for days filled with different types of gin and liqueur made by Edinburgh Gin.

Remember how I said I wouldn’t be tasting as I we had to travel home after the tour? Well, unfortunately, the below happened. Gin is apparently brilliant for my travel sickness, although not a preventative method I could use on a regular basis.

Word to the wise, do not take any of your shots too quickly or you could end up making the same mistake as I did. I took a shot of what I thought was 20% Elderflower liqueur and it turned out to be navy strength 57.2% Cannonball gin. If this happens you will not be able to walk or say Edinburgh, ‘Efininburrrgen’. At the end of the Gin Connoisseur tour, we were all provided with a 20cl bottle of our choice to take home with us. I had the rhubarb and ginger gin liqueur because it is my all-time favourite! 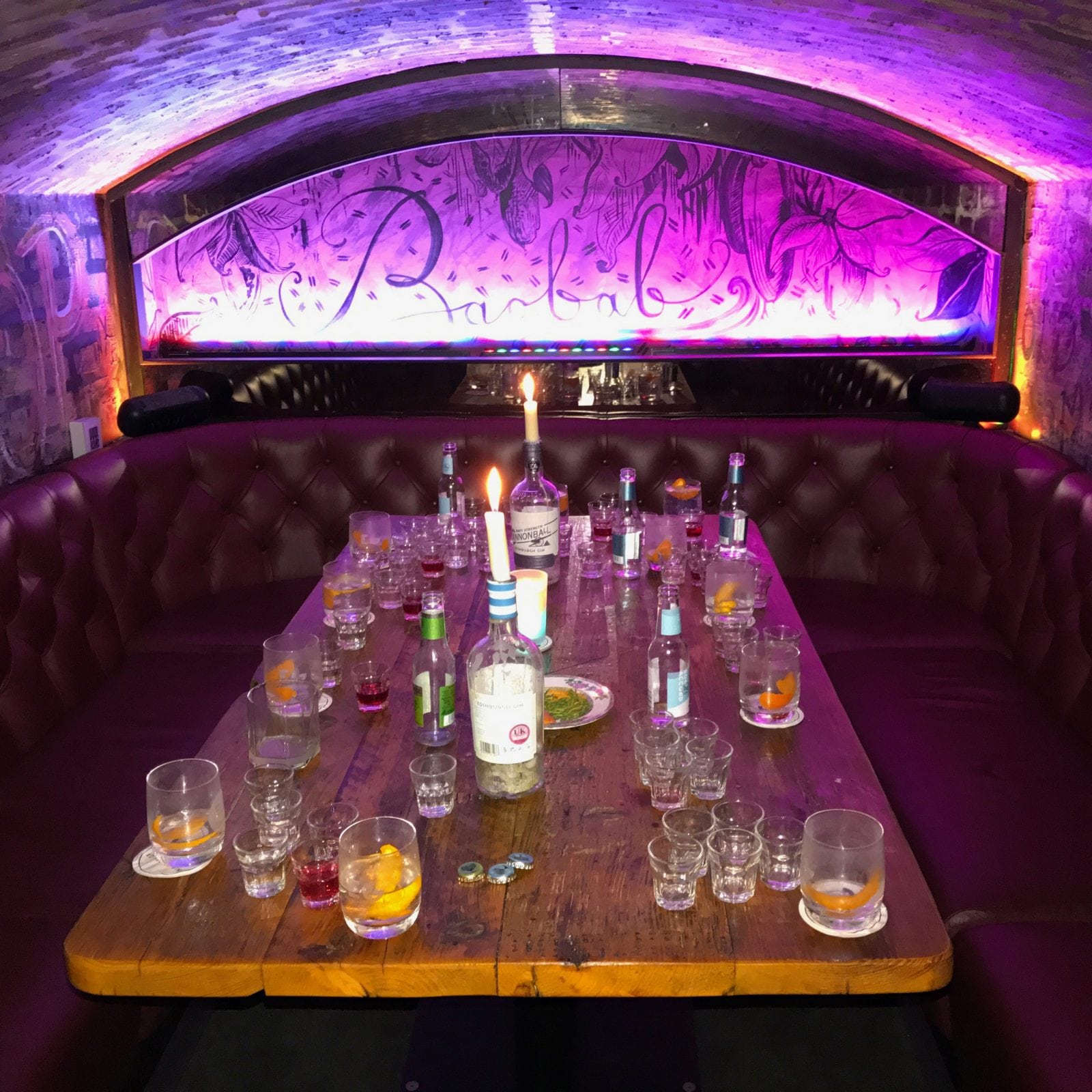 Why we recommend the Edinburgh Gin Tour

Throughout all of our distillery tours, the Edinburgh Gin Tour was definitely one of my favourites, along with the Famous Grouse Experience. I have had to limit what I put in this review as I don’t want to spoil the tour for those of you who are planning your own Edinburgh Gin Experience. The tour guide was sensational and the different gins and liqueurs were gorgeous.