We have really pushed the goat out with our review of Edinburgh Zoo, you have been warned.
We crazy cats at The Aye Life decided to take a break and give our Monday a porpoise. Scott wanted to gopher a beer but I told him…

‘Scott, you’re giraffing me crazy, alpaca lunch and we will check out the zoo.’ What was I supposed to do? I wouldn’t have gone owl by myself.

‘whale whale whale, toucan play that game.’ Scott said hawkwardly. For fox sake, who was he kidding, he was toadally in to it. And so our Edinburgh Zoo trip commenced… 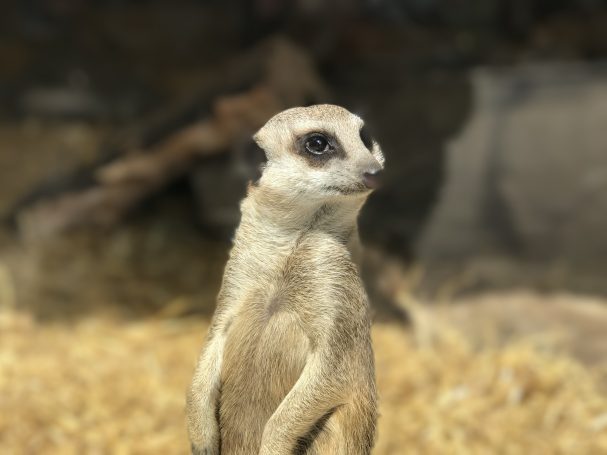 The first little mad man we came across on journey round the zoo hotspots was Mike. Mike is a meerkat and he is not commonly known as Mike. However Scott and I thought it would be fun to give the animals names on our tour. If you have miniature humans, this is a brilliant idea for a game to keep them even more entertained during your visit. In fact, Edinburgh Zoo, if you are reading this, get a little print out on the go for the kids. Tell them to hand it back at the end and give the kid a lolly or something. You might get some koalaty laughs!

We are fairly paws-itive that Mike was a model in another life as some of the poses he was pulling out more than koala-fied him for Scottish Vogue. He was a little charmer and he made love to the lense of Scotts camera. 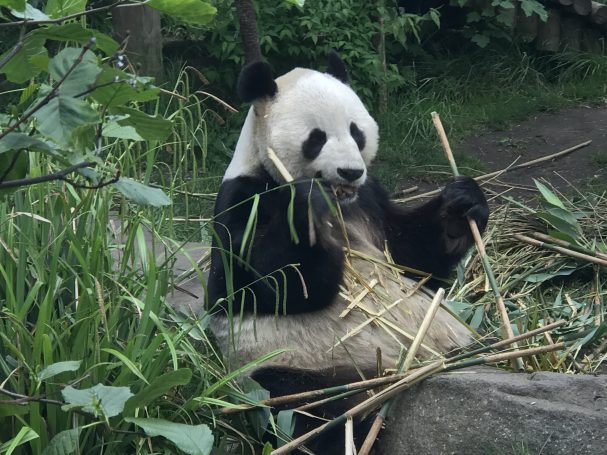 The caring crew at Edinburgh Zoo went above and beeyond to ensure we had an emusing time during our trip. We were provided with a panda viewing slot and with such a busy morning, we bearly made it in time. Pablo was on good farm though as he sat out and ripped apart a pile of bamboo with his bear hands. It just goes to show that even eating lots of greens, can still leave you with a bear belly. Pablo is one of the pandas on holiday from China. His name isn’t really Pablo, it is actually Yang Guang which translates to Sunshine. We called him Pablo for short.

All puns aside, I couldn’t recommend booking a panda viewing slot more. Seeing Yang Guang brought a tear to my eye and Scott was blown away also. The pandas really are a wonder to behold and we will be making a point of going back for another viewing. Lets hope they get to stay in Edinburgh as 10 years really isn’t long enough.

I hate being bipolar, it’s awesome 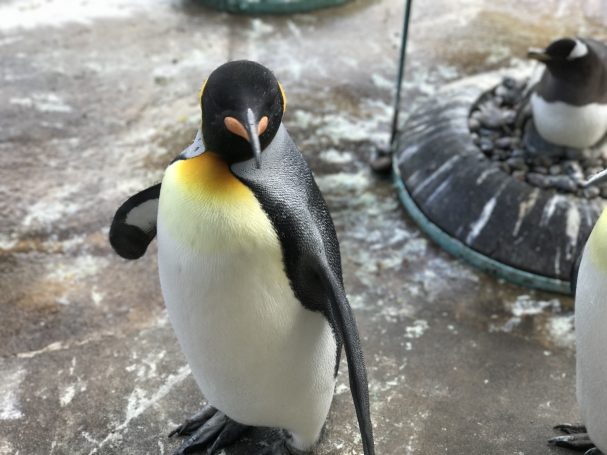 If I am ever acting like a sealy hippo-crate, take me to the penguin enclosure at Edinburgh Zoo and leave me there for a fortnight minimum. Prefurably take me there during breeding season so I can watch those men work hard for their women. When we were there, the lady penguins were nesting and the boys were waddling around with their cute wee feet picking up stones for their partners nests. They are cunning too as they steel stones from other nests. The whole situation is incredible to watch.

One specific male penguin, Alfred, was having a terrible time and kept dosing off at his partners side. Every so often his wee head would fall on to his wee chest and he would wake himself up with a fright. Alfred was working hard for his woman and at no point did she say thanks to him. Don’t worry Alfred, we appreciate your herd work.

Scott decided to take 700 videos of the penguins swimming back and fore in their little pool. So whilst the penguins did the same length repeatedly, Scott video’d the same thing repeatedly. It was a little like watching a tennis match except the whole situation was beyond my control. 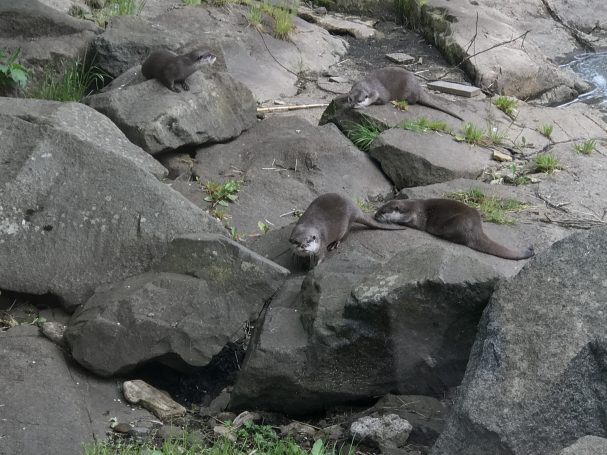 Those dam otters. We watched the grand theft otters wander curiously round their enclosure from a distance. However as I got closer, Jake and his pals became very inquisitive of me. It kind of felt like I was the attraction and they were watching me in my enclosure.

Otters are cute, I would have an otter if I had a big enough pond, or any pond. Scott doesn’t want an otter, he would be happy with just a mere cat.

I don’t always look this good, but when I do, the ladies go bananas 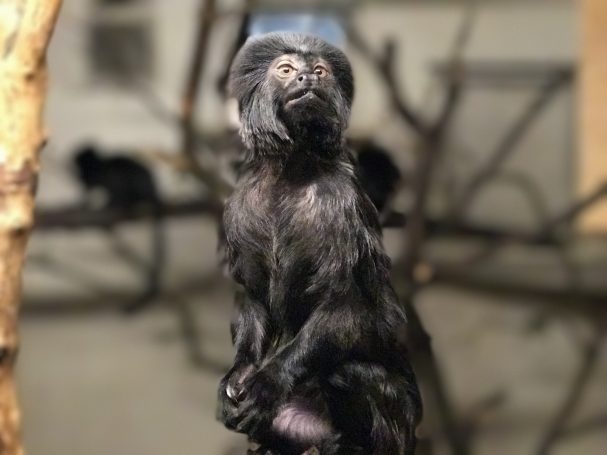 You know that famous scene in Harry Potter, Philosophers Stone where Harry speaks to the snake and doesn’t realise that he is speaking in cobra. Well, I experienced a similar situation with Scott at the Monkey enclosure. I think they may have thought that Scott was one of their own, maybe due to all the hair? Either way, they understood each other and I really could of left Scott there with his family to go ape. 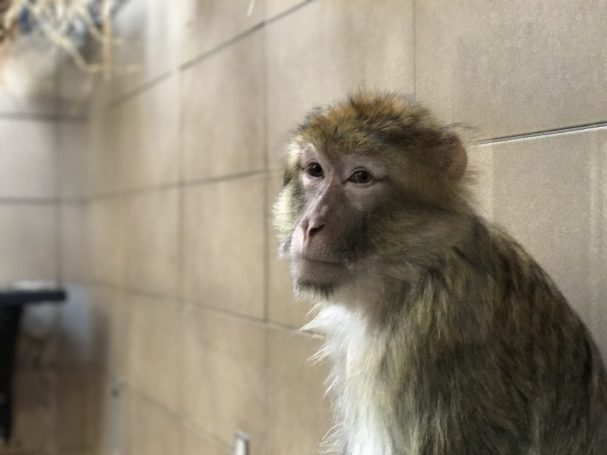 Monkeys, like penguins (and I am fairly confident that no one has ever made that comparison before) are loaded with comedy and entertainment. If I got to watch monkeys playing and penguins waddling at Edinburgh Zoo for at least one hour every day, I would be a much better person. Edinburgh Zoo had a number of different monkey species including; capuchins, gibbons and barbary macaques. All of which were cute and clever in their very own ways. They even had a monkey named after an auntie of mine, the Diana Monkey and to be honest, I definitely seen the similarities..

Lets go check out the birds 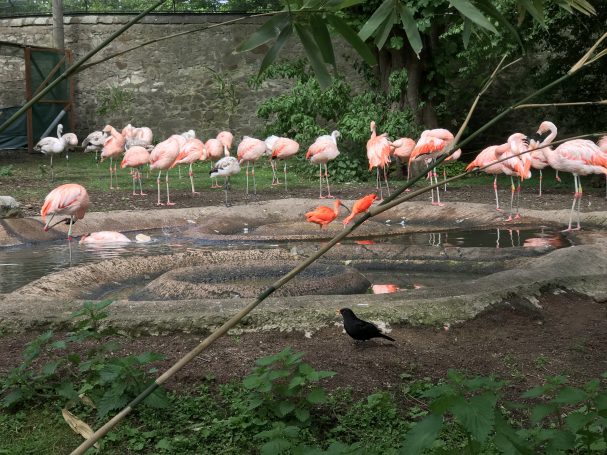 Why does a flamingo always stand on one leg? If it didn’t stand on any, it would fall over. Single and read to flamingle. Flamingos are beautiful and majestic birds. Wouldn’t it be wonderful if all the seagulls at Aberdeen beach could be replaced with flamingos? We would go from seaside town to Scottish resort in no time. After I spent at least half an hour looking at the pink beauties, Scott said we had to flaming go… 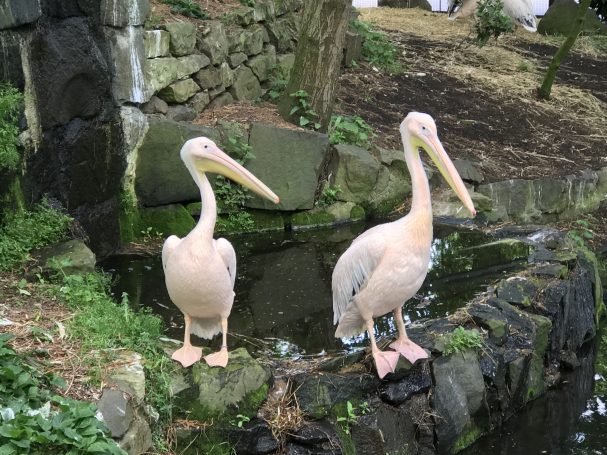 Whether you pelican or pelican’t, there is no excuse for not checking out these massive and animated birds. As we strolled through the pelican walk-through, we watched Peggy the pelican flap her gigantic wings and sing from her gigantic beak. Less of a sing and more of a squawk and probably not x-factor worthy however it was amazing to watch nonetheless.

You have cat to be kitten me

Planning to visit the Zoo? Tickets are now available to pre-book until 30 June. Book in advance to save up to 14%! https://t.co/dlKGTUyF2R pic.twitter.com/hhbbXT0M28

When we first arrived at Edinburgh Zoo, we were asked if we had mobility issues. Unfortunately ‘I can’t be bothered walking’ does not come under mobility issues. However, Scott actually had half his spine removed in an operation last year but is in denial and never said anything. Therefore we attempted the cats but Scott backed out.

We spent 7 hours at Edinburgh Zoo but I could of spent 20 as the place is fantastically well maintained, extremely professional and entertaining in every aspect. This is a brilliant place to bring the family and I am a little disheartened our Edinburgh trip was coming to an end as I could easily have visited the next day.

We had a punderful time and iguana go back as soon as possum!

Thank you kindly to Edinburgh Zoo who not only hosted us on a complimentary basis but also had excellent communication from the get go. We cannot wait to join you again and we loved every minute. Opinions as usual are funny, relevant, mine and come from one hell of a pundit.