12 Festive Things to Do in York This Winter

Well, suffice to say we’ve had a lot going on in the background. You should probably worry about me when I’m quiet, it’s because I’m up to something. In this case, it was finishing up at the beautiful Maryculter House in Aberdeenshire and heading South of the border for, well, a break. I mean, I’m still writing about it, but that’s because I love writing. It offers me an escape. And so I escaped, I escaped to York and then I escaped more by writing about it. I hadn’t been to York since I was about 9. I remember that trip because I carried a notebook everywhere for writing notes about York history that I never used for anything. Although I guess all that’s kind of paid off for me since seeing as I’m now a writer, sort of. We ended up working with VisitYork (full circle) to show you some of the lovely festive things to do in York, during our trip.

12 Festive Things to Do in York This Christmas 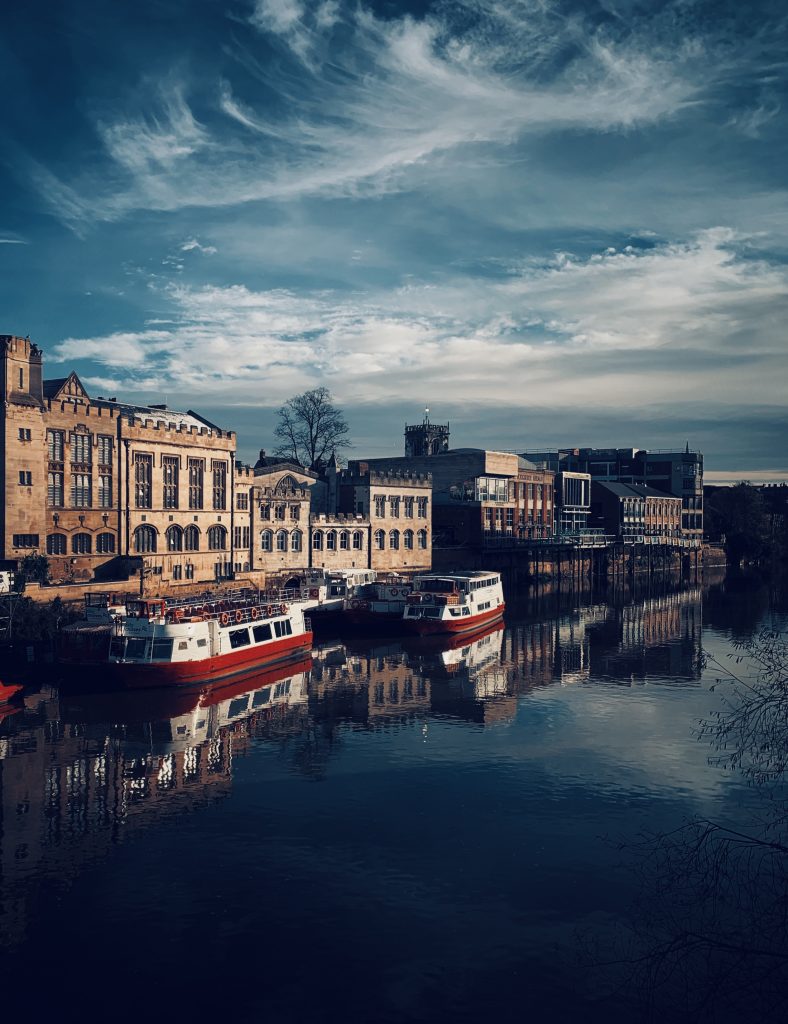 York was different from how I remembered it to be, but yet, it was exactly the same. There were more funky restaurants and independent shops, but the original York-ish architecture and skinny medieval streets still stood as I expected. I loved York when I was a kid, but York was way more fun as an adult. At least this time, my notes were being put to good use, and I could partake in multiple Bailey’s hot chocolate offerings, and cocktails because city breaks and cocktails are two folks who have never been so in love. So, here are the festive things to do in York that we did, I’m sure there are lots more, but this kept us fair busy and topped me up with the Christmas spirit I most definitely needed. 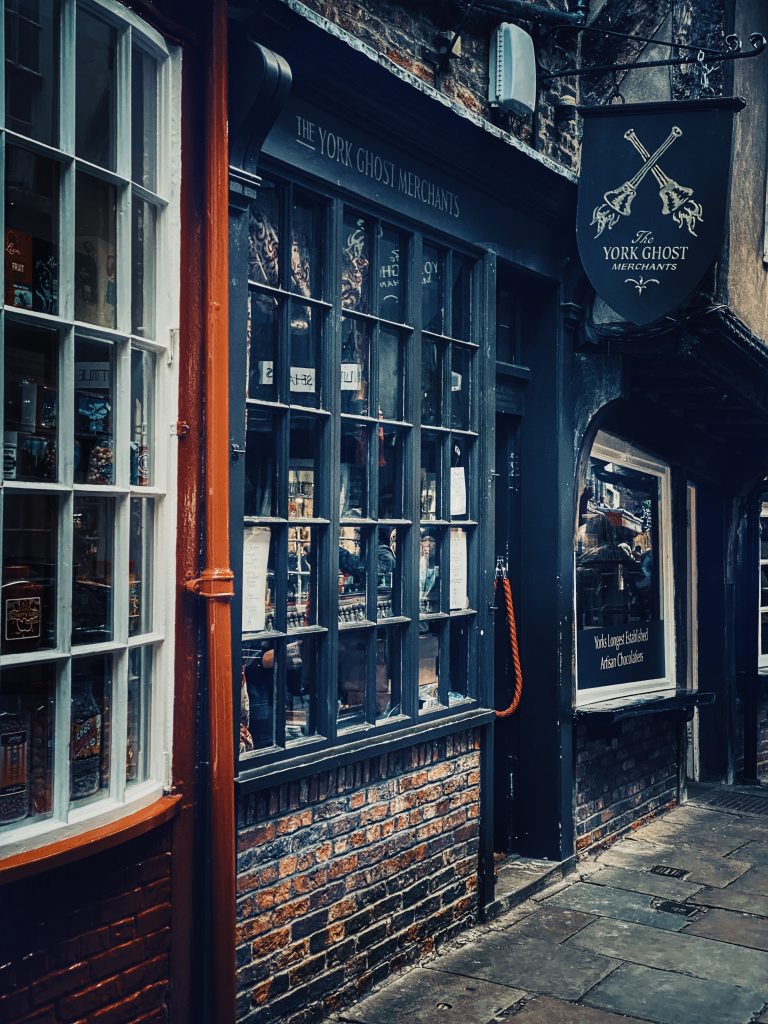 I know Halloween might have passed, but if you’re an all-around too ghoul for school type like me, you have to go into the “1000 phantoms that sell out in 90 seconds” Ghost York Merchants. Each ghost is unique, so no ghost will ever be like your ghost. The shop is located on the Shambles, but I’ll get onto that. You pick the wee ghost that you take a liking to. I picked mine in about 6 seconds. I just knew. Most folk who go to the York Ghost Merchants will take home a ghost. Mine lives on the dash in our van, joining us on our various adventures around the UK (and further afield). He is a wee dude who I think was lost at sea, I’m still needing a name for him tho. 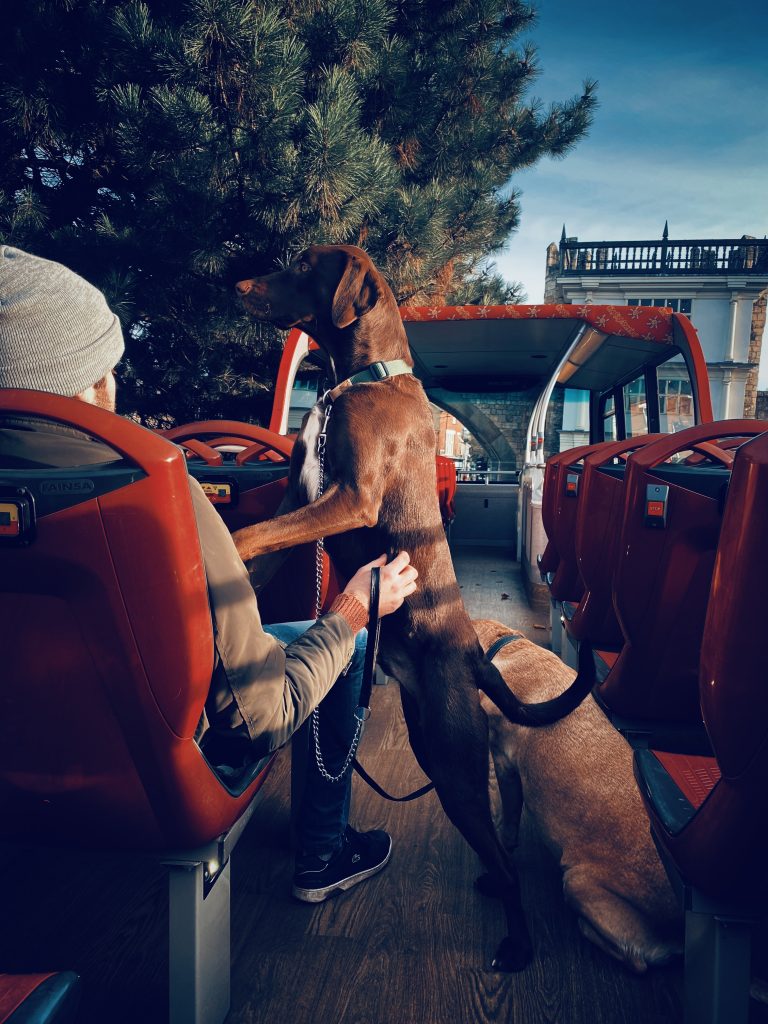 Go on a City Sightseeing tour because York is packed with history & the architecture is lovely. Think Ye Olde Taverns where smugglers and ghosts live. This is also a great way to see the York City Walls and the two rivers that run through York; the Ouse and the Foss. I didn’t know City Sightseeing buses were dog-friendly. Our Corrie was a fair fan. Now I just need to do this in every city. Which means taking Corrie to every city. He isn’t complaining though, wee toff. 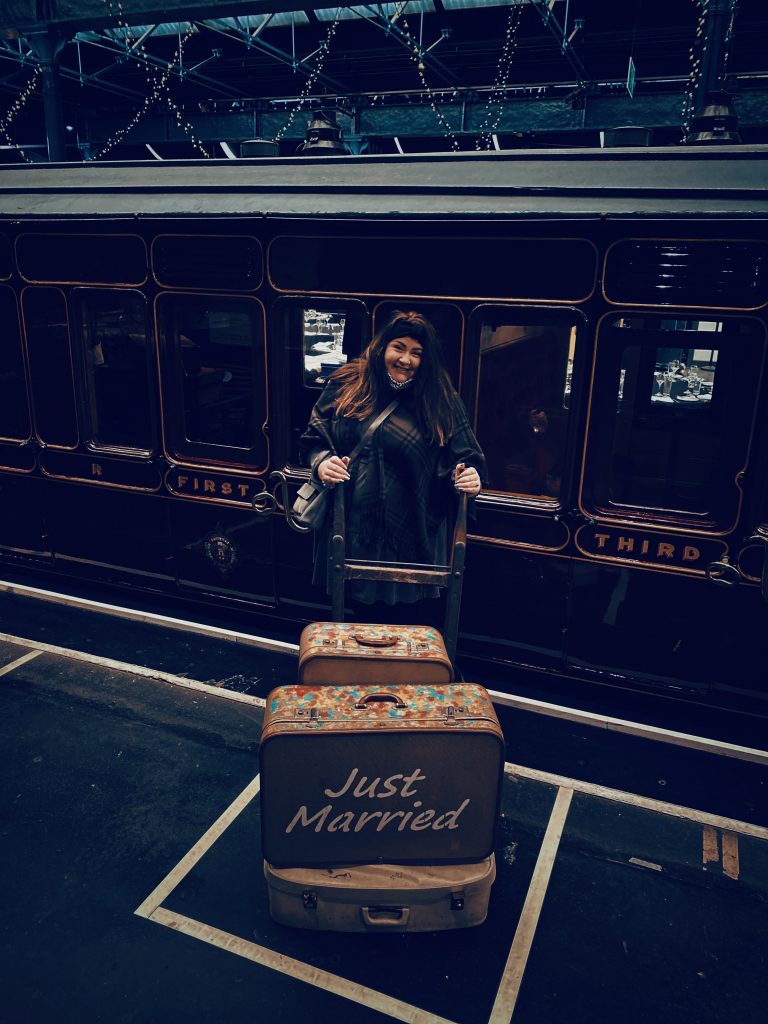 This is one of the “I can’t believe this is free” attractions in York. It’s quite glorious, and around the festive period, it’s adorned with lots of twinkly wee lights. There are some pretty incredible feats of engineering in the National Railway Museum, including a massive black train that I’d have zero hope of getting myself up onto, which was built in Britain and sent to China to navigate a pretty impossible stretch of railway. It’s like three Scotts high, which is tall. And it looks a bit like an angry cartoon steam train. It was awesome. 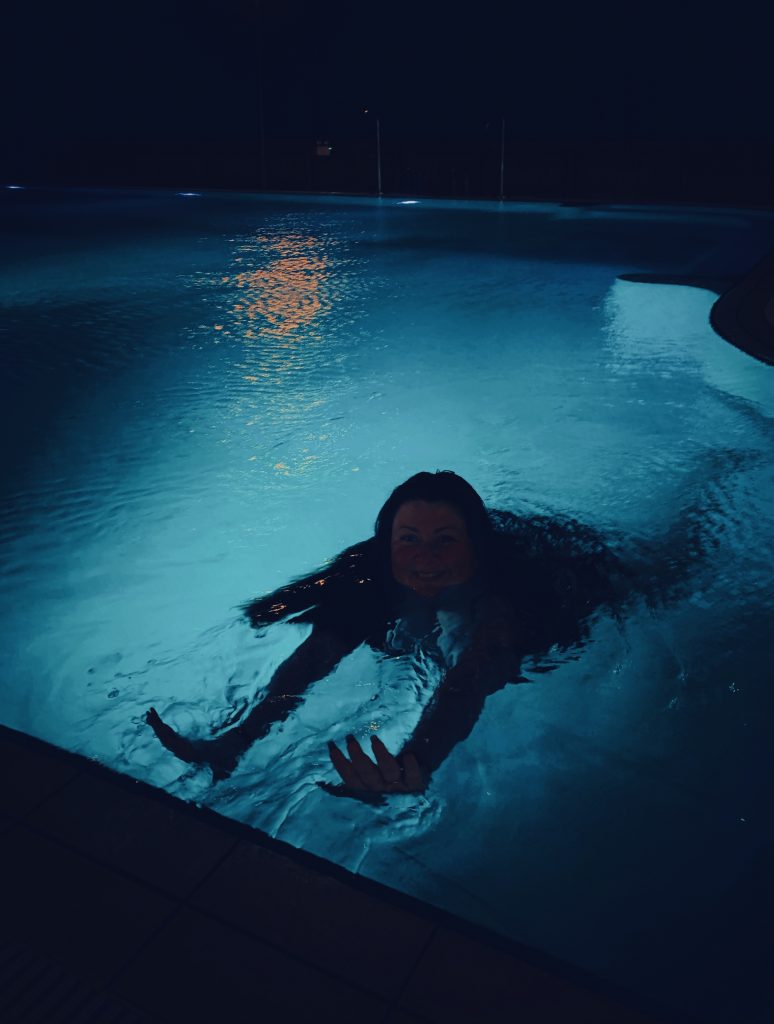 Is there anything quite as festive as a nighttime swim in an outdoor lit-up pool with Michael Buble’s dulcet tones echoing in the background? I don’t think so. Alpamare is a water park in Scarborough, Yorkshire. Alongside being awesome fun for kids (and even more so for adults), it also has a Wellness Spa (which unfortunately was closed when we visited due to the time of the week) that features steam pools and clay baths. So if you’re tired from all that York Christmas shopping, I’d say Alpamare is the place to go. 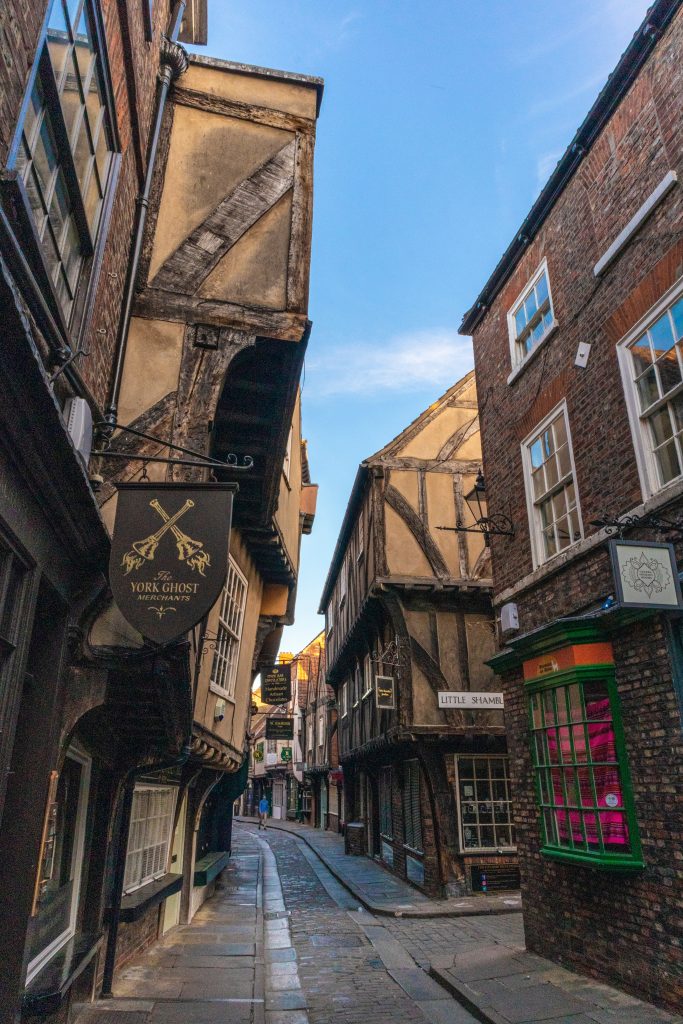 This is one of my favourite streets in the UK I reckon. It has all the hallmarks of a medieval village; rickety old buildings with oddly shaped architecture, the buildings lean towards each other. It’s said that if you leaned out of the window in one of the buildings on either side of the Shambles, you’d be able to shake hands with the person on the other side. The Shambles is said to have inspired JK Rowling in her Harry Potter books. After having been there, I completely agree. This is a magical street with tons of history, lots of independent shops, including the Ghost York Merchants, and some of the best pie shops I’ve ever seen. One of our dogs made fierce attempts at getting into them.

If you’re looking for festive things to do in York and just shopping in York in general, make it the Shambles and the Shambles Market. 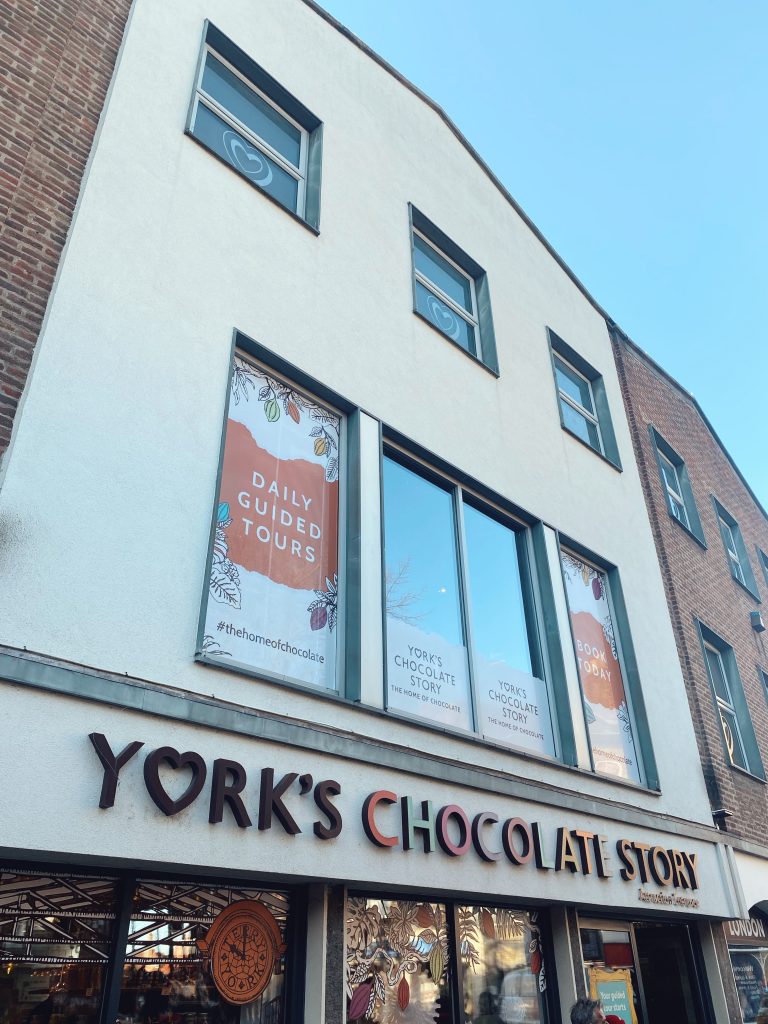 Chocolate and York and Christmas are birds of a feather that are well and truly flocking together. I had absolutely no idea that York is the birthplace of Rowntrees, KitKats, and Terry’s Chocolate Orange. Did you know that? There’s no way you knew that. It makes perfect sense that there’s an attraction in York dedicated to York’s Chocolate Story which is called, well, York’s Chocolate Story.

This was a fascinating story of not only York and chocolate, but chocolate and chocolate. We followed the process right through from chocolate and the Aztecs to chocolate and the now. From bean to bar, from husk to heaven. We also walked away proud owners of white chocolate lollies that we made ourselves (kind of). I’d recommend popping in here, especially around Christmas, for gifts for you and them.

The queen of festive things to do in York, enter York Christmas Market. It’s been a good few years since I was last at a Christmas Market, I think our last one was London so it was lovely to be back in the festive buzz. My other half was concerned as soon as he saw the twinkle in my eye. In all fairness, I only walked away with a Disney carpetbag and 3 bags of pork scratchings that I didn’t need. I think he got off lightly. The atmosphere was lovely as folk hustled and bustled through the scents of hot chocolate, fudge, and rum. Let’s all make the York Christmas Market a must-visit thing. Also, a wee shoutout to the opera singer who was absolutely nailing Poor Unfortunate Souls to the wall, he was on fire. Everything. 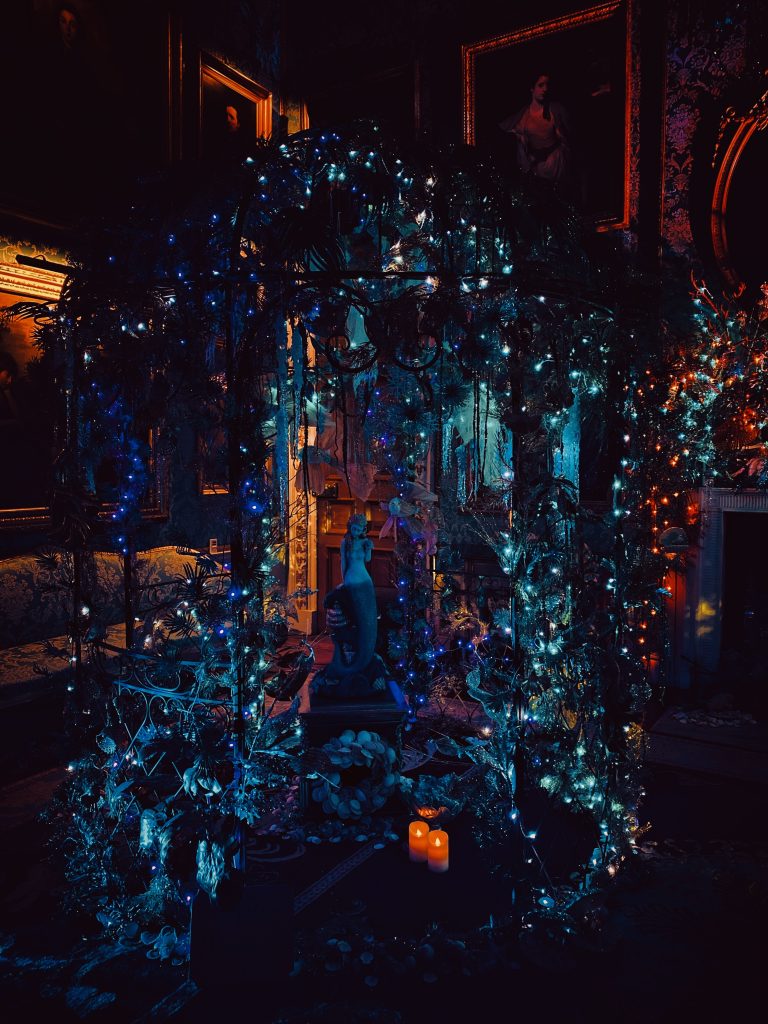 Alongside being the set of Bridgerton (which was enough for me alone), Castle Howard is also home to the Narnia Christmas Display. I mean, it’s not like it was literally snowing when we arrived. And it’s not like I was trying to conceal the unconcealable joy on my face or anything. Narnia at Castle Howard is one of the best Christmas Displays I have ever seen. Like, in my life. It took me to another world at another time, which I think when at Christmas, we all like to do a little escaping. There’s a reason why so many of us indulge in all the Harry Potter films at Christmas. Escapism. What a beautiful location for a beautiful display.

Also, the estate burgers in the farm shop are off the chart. 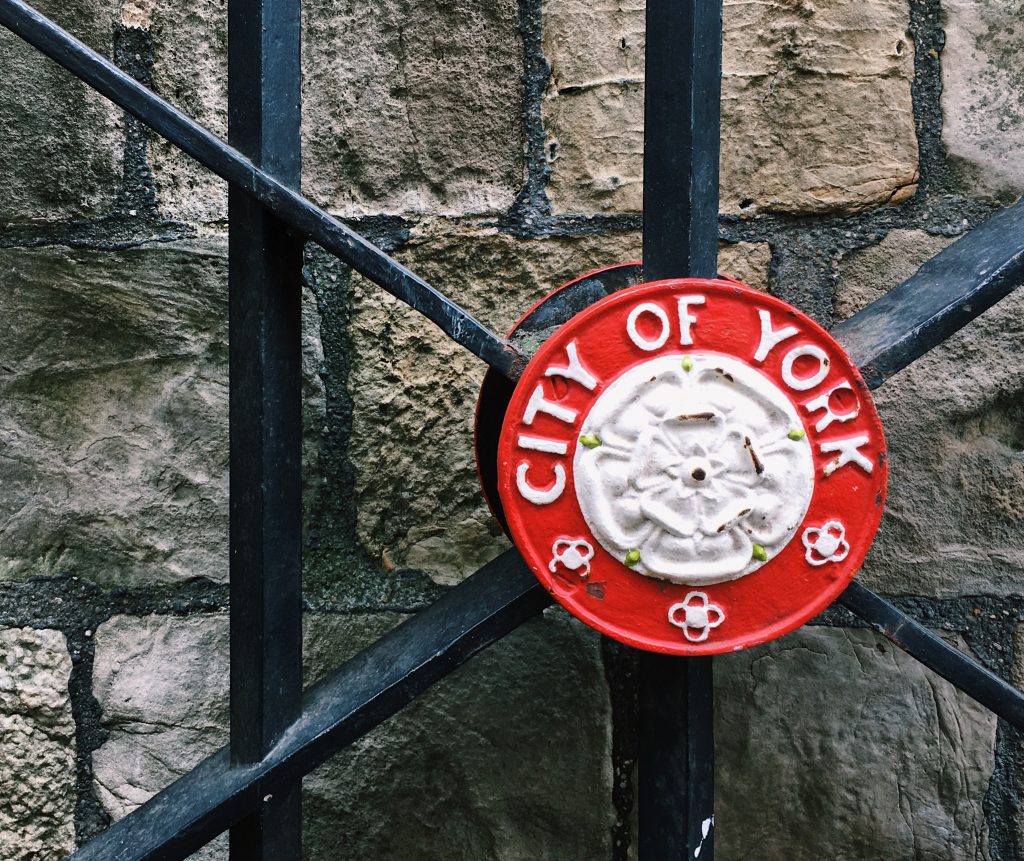 It wouldn’t be a trip to York without a visit to the York Dungeons. Which were every bit as grizzly as I remember. We met everyone from Guy Fawkes to Dick Turpin (a very misunderstood soul) and even came face to face with actual Vikings. Aye, well, as close as you can get to an actual Viking in 2021, but you catch my longboat. The York Dungeon was great, and I only screamed and lost control of my knees like one time. No matter who might say different. If you’re looking for family-friendly activities in York, it might depend on the mass of balls in your family. It’s not terrifying terrifying, but it’s no walk in Sherwood either. 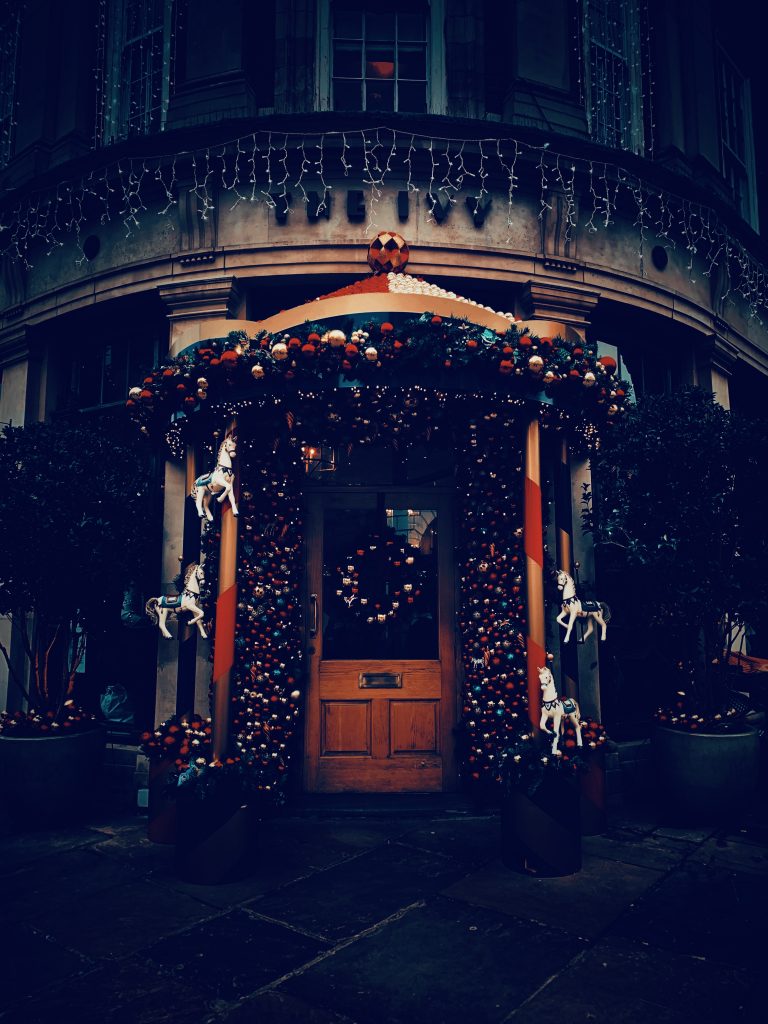 And for festive places to eat in York, you really need to get along to The Ivy. But book in advance, because this place is divine. We indulged in the Carousel Festive Menu which did the whole ‘City Break and Cocktails’ thing marvellously, and thanks to the addition of Grey Goose Vodka, white chocolate liqueur, and Irish Cream, you cannot go wrong Mon Cheri. The A La Carte menu was sensational, but then again, when is truffle and parmesan topped anything, not a sensation? If you’re after festive places to eat in York, get along to The Ivy for creative, warming dishes and fantastically festive cocktails. 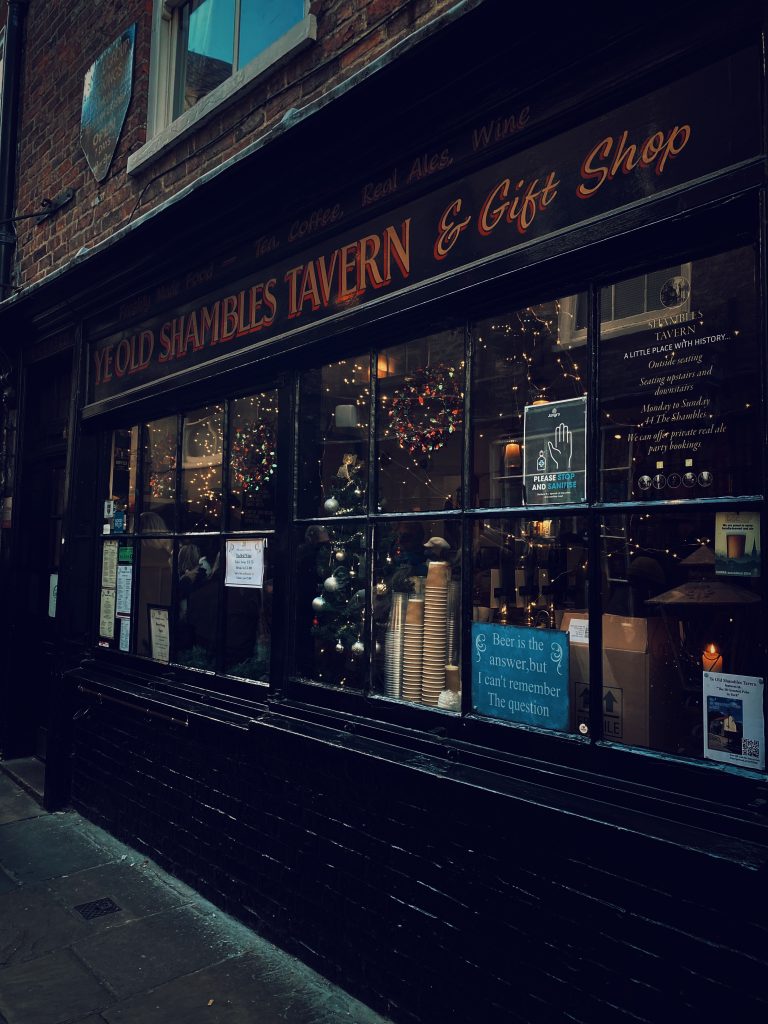 As far as buying pork pies for your dogs whilst you devour southern fried chicken topped chips go, I’d say it wouldn’t be a visit to York without a visit to the Shambles Tavern. Quaint, cosy, and just about as tavern as a tavern could get, I highly recommend this for both you and your furry pals. 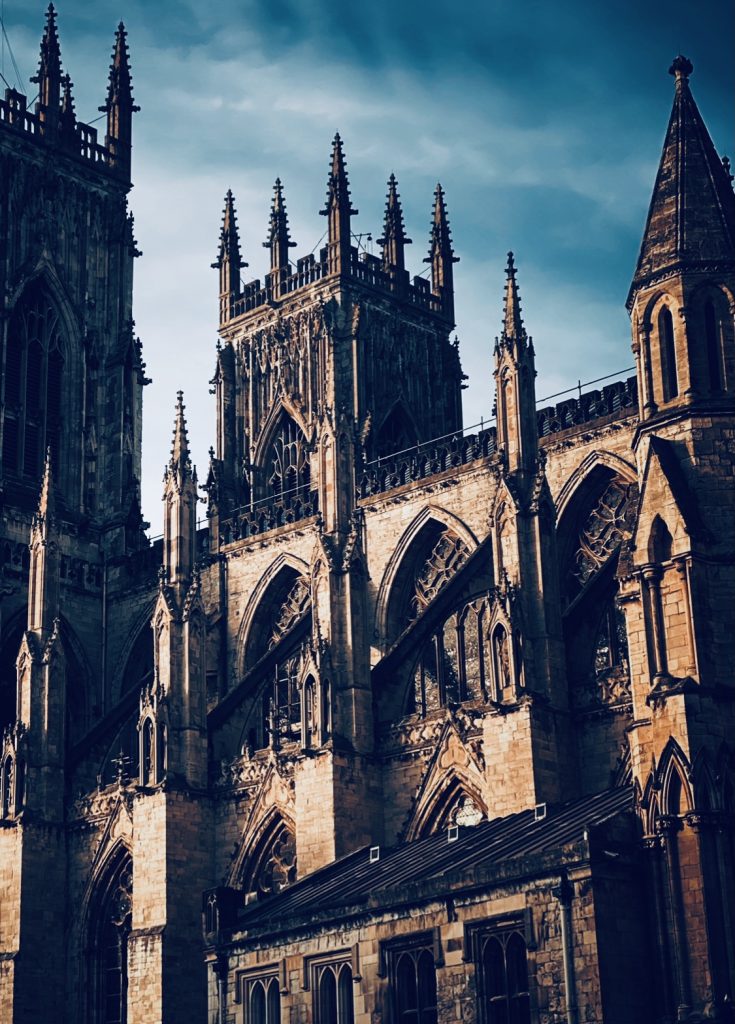 You want Christmas movie? I’ll give you Christmas movie! How often is it that you stop to photograph the “this took 250 years to build” York Minster and see an actual dude proposing to an unsuspecting Christmas princess? That happened, in front of our very eyes. It was heartwarming, it was beautiful. It was festive. So, although I can’t promise you live proposals, York Minster itself is an incredible building with a wealth of history. It’s also impossible to take a bad photo of. Pop along.

We barely scratched the surface on festive things to do in York, but it was still a perfect wee trip. If you’re looking to visit York this Christmas, Winter, or sometime in the future, pop on over to Visit York for a right good nosy at all the things to do; festive or otherwise. Our thanks to Visit York for accommodating us, and a special thanks to Lisa Byrne PR and The Ivy York. I wanted to be a part of it, York, York.