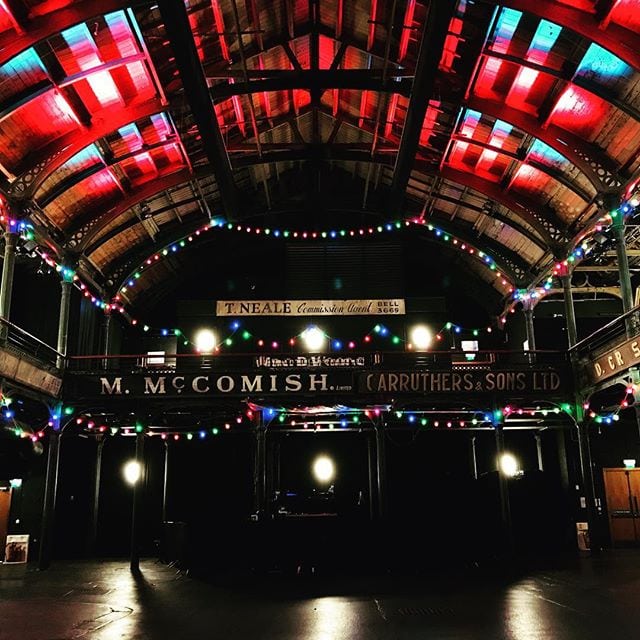 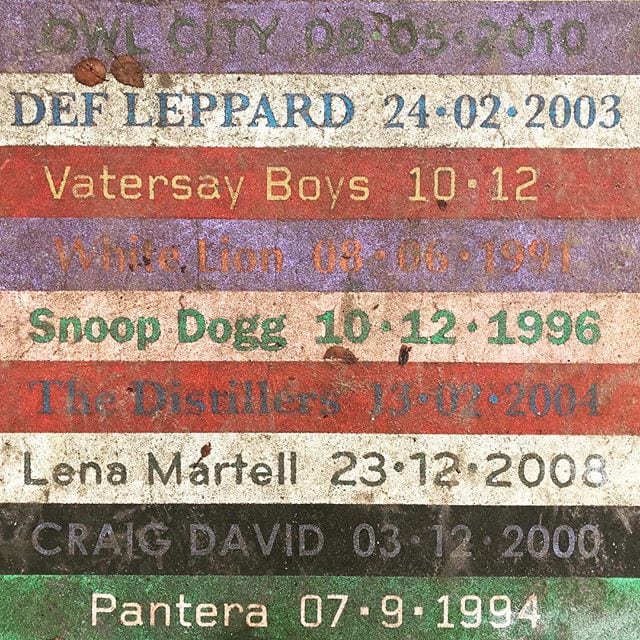 The city of Glasgow was the first UNESCO city of music in the UK, gaining the title in 2009. Liverpool later joined Glasgow when it became the second city to gain the title. Who the hell ever came out of Liverpool…?

Glasgow has the largest music economy in the UK after London, worth £75 million a year! It has exported acts such as Texas, Deacon Blue, Travis, Chvrches, Amy Macdonald and Simple Minds. Mark Knopfler of Dire Straits and Malcolm and Angus Young of AC/DC were also born in Glasgow before leaving for Newcastle and Sydney. Why would anyone ever want to leave Glasgow?!

Glasgow acts as Scotlands primary music destination as many bands play their one and only Scottish date in Glasgows SECC. Fans from all over Scotland flock to the city for their favourite tunes. A Scottish audience is the best audience in the world.

Our first stop on the Glasgow Music Tour was the infamous Fruit Market. The Fruit Market closed in the 1970’s. The building was left derelict for over 20 years until 1993 when the organisers of the Glasgow Jazz Fest stumbled upon it. For some reason, they thought it was the perfect place for Jazz; 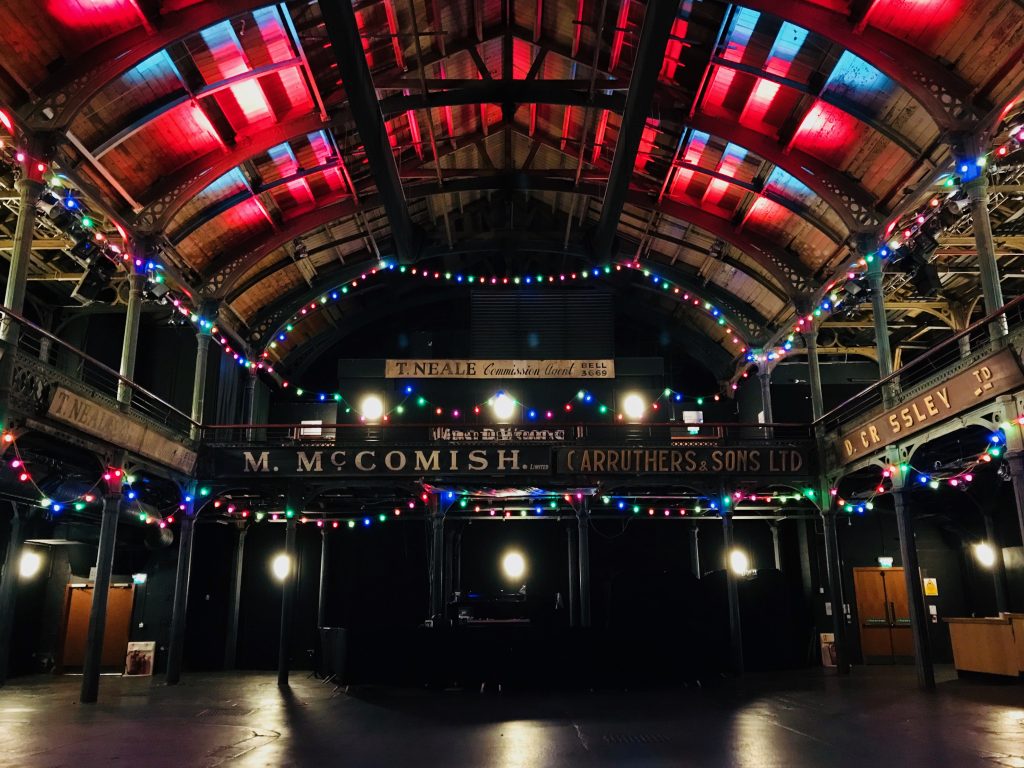 The markets style was reminiscent of New Orleans and reminded the organisers of the famous jazz realm, Bourbon Street vibe. If you’re missing the connection here, New Orleans is the birthplace and home of Jazz. 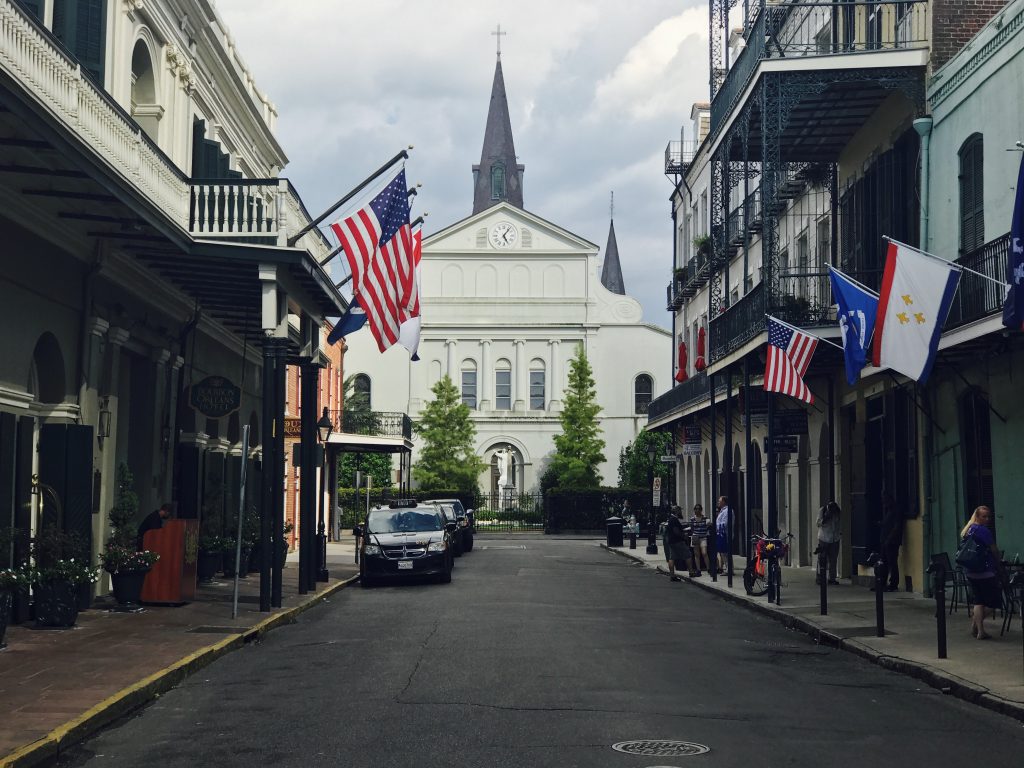 Celtic Connections, the largest Celtic folk festival, first used the venue in 1994 and have been back ever since. 2018 marks the 25th year of the festival where over 2000 musicians come to Glasgow every year to perform folk, roots and world music.

The festival is produced by Glasgow’s Concert Halls. The Celtic Connections Artistic Director is Donald Shaw, who is the founding member of Scottish folk band Capercaillie. In 2007 the festival brought over £5.8 million to the cities economy.

The Danny Kyle open stage, named after the famous Scottish folk singer is a notable event at Celtic Connections. The open mic event allows up and coming acts to showcase their talents to a larger audience. Some winners have headlined the festival in later years. 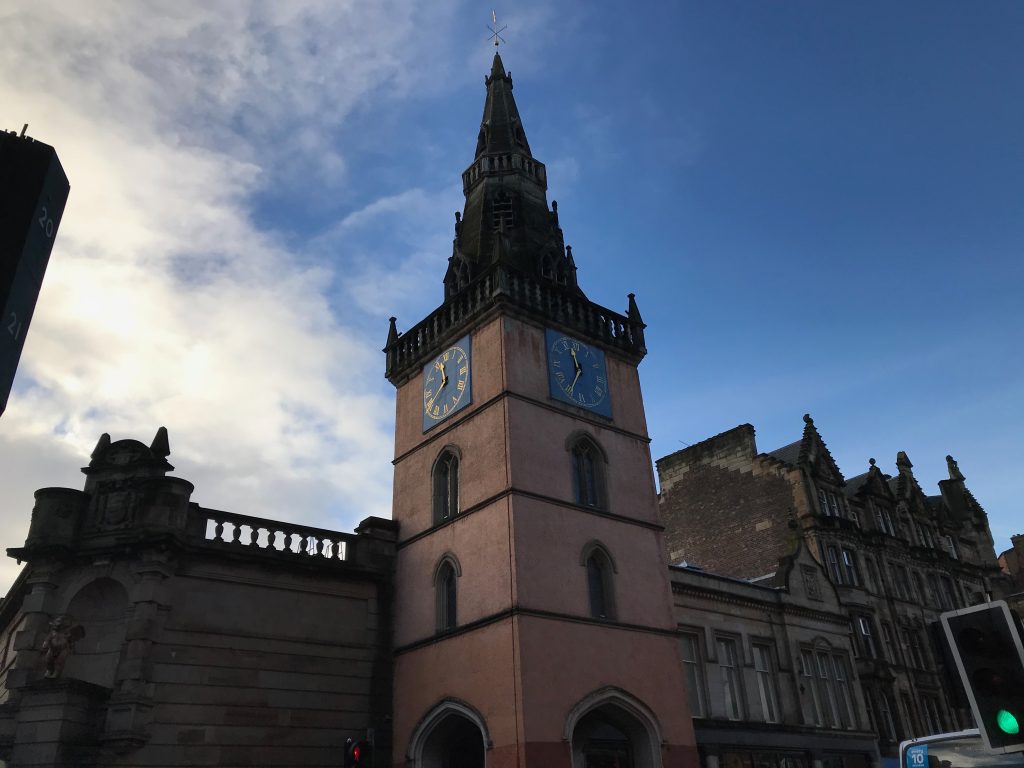 Our next stop on the Glasgow Music Tour was Tron Theatre. Nestled in the heart of Glasgow, the Tron theatre also plays host to Celtic Connection events over Glaswegian winters. It lies in the Gallowgate area, an area historically known for its public hangings of the cities worst criminals. Now they get a light fine. How times have changed.

The name Tron comes from the weighing device used by the cities merchants and traders.

The building was originally the Collegiate Church of St Mary and St. Anne. In 1793 a secret society named the Hellfire Club drunkenly burned down the church. Only the steeple survived the attack with the replacement building built around the remaining structure to become the Tron Theatre. 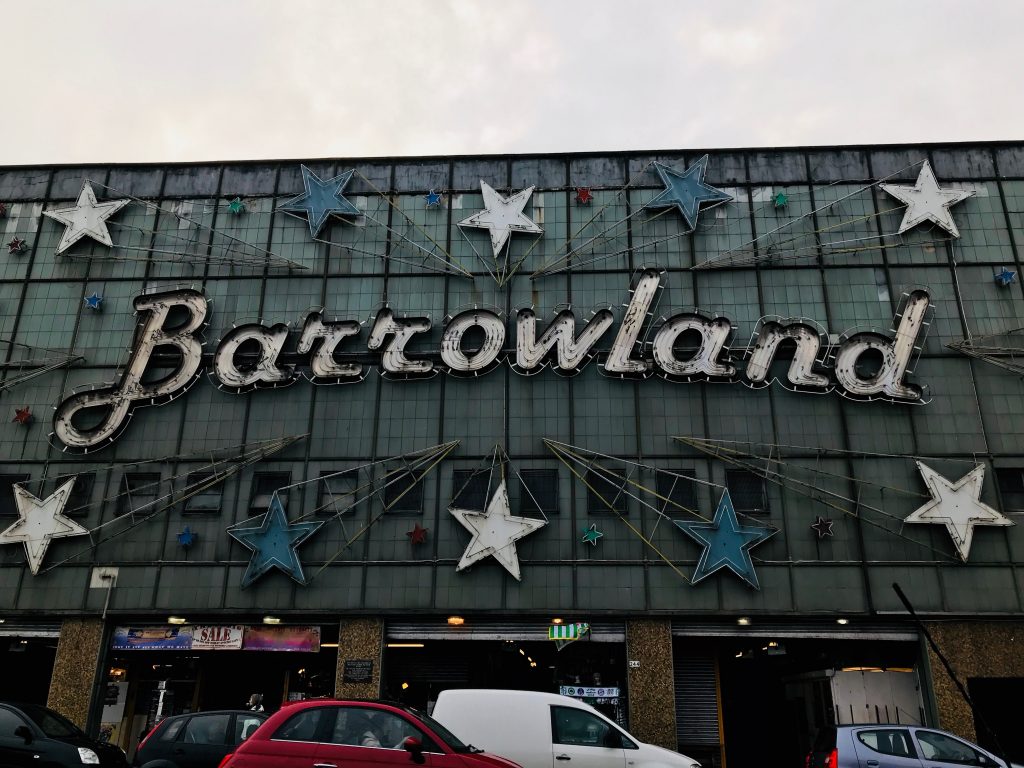 Our next stop on the Glasgow Music Tour was one of the most well-known venues on Glasgow. Built by businesswoman Maggie McIver in 1934 to the east of the city centre, Barrowlands is a favourite music venue to Glaswegians, Scots and musicians alike. Metallica described playing Barrowlands as – “the best gig we’ve ever played.”

The Ballroom is named after the Glasgow Barrowland Market, known locally as the “Barras.”

The original Ballroom was burned down in 1958 (there seemed to have been a lot of fires in Glasgow back in the day), rebuilt and reopened on Christmas Eve 1960. The venue stopped playing host to music and bands for a prolonged period until November 1983. Glasgow’s own Simple Minds rigged out the building to film the music video for Waterfront.

The next month, Big Country were booked to play Hogmanay and Barrowlands Ballroom was reborn as the music venue in Glasgow. 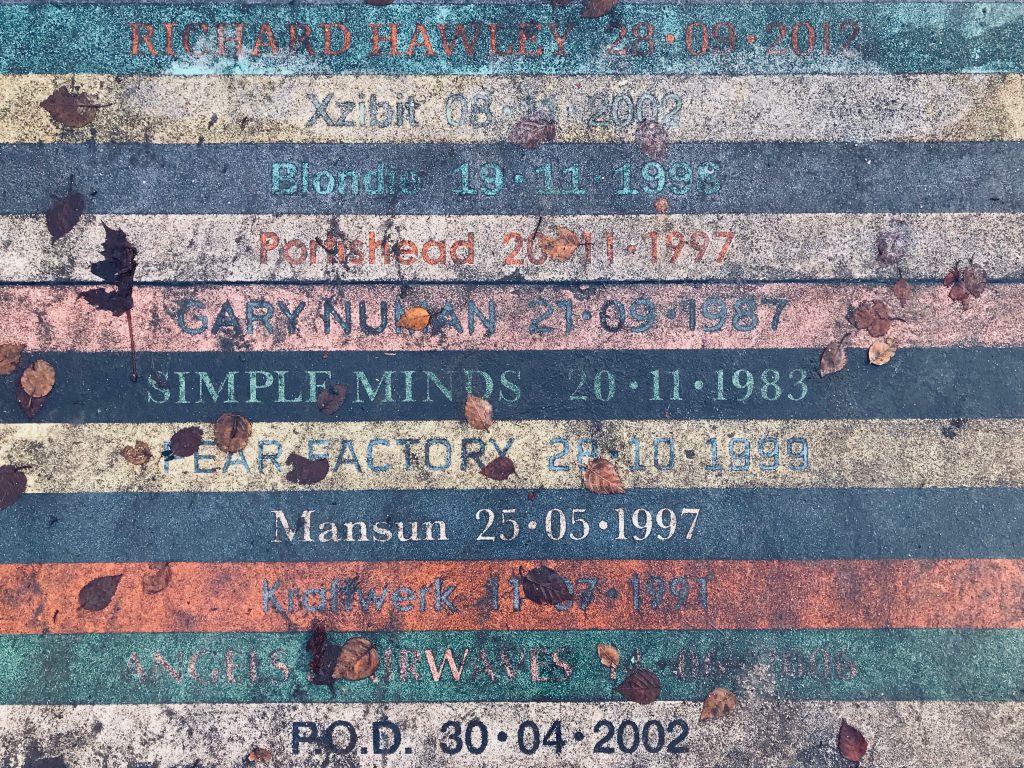 Down the street from Barrowland Ballroom is Barrowland Park. When Glasgow hosted the Commonwealth Games in 2014, a host of regeneration projects started throughout the city. The creating of Barrowland Park was one of them. 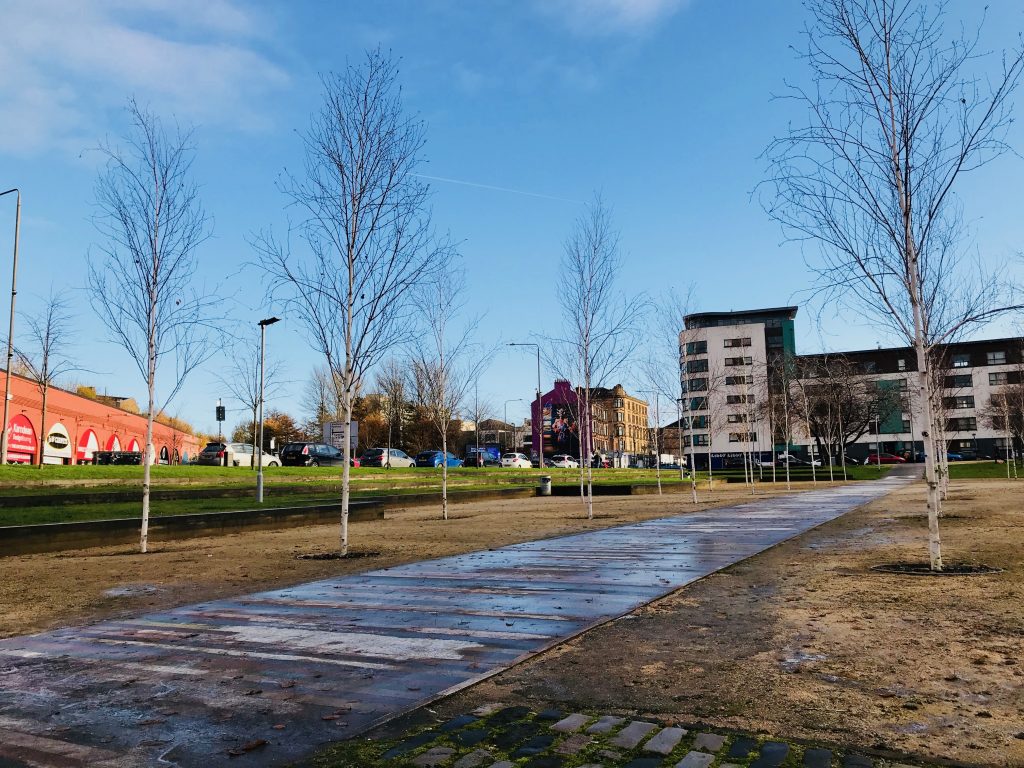 Artist Jim Lambie put together a pathway across the length of the park that resembles a shelf of records. As you walk the path you can see all the bands that have played in the Barrowlands over the years. The picture above displays the first show by Simple Minds mentioned earlier. Some of the other names you might have heard of are; New Order, The Kinks, System of a down, Blink 182, Mr Big, Snoop Dogg, Smiths, Oasis, Slipknot, Slayer and Pantera. Scotland really does pull in the best of the best. 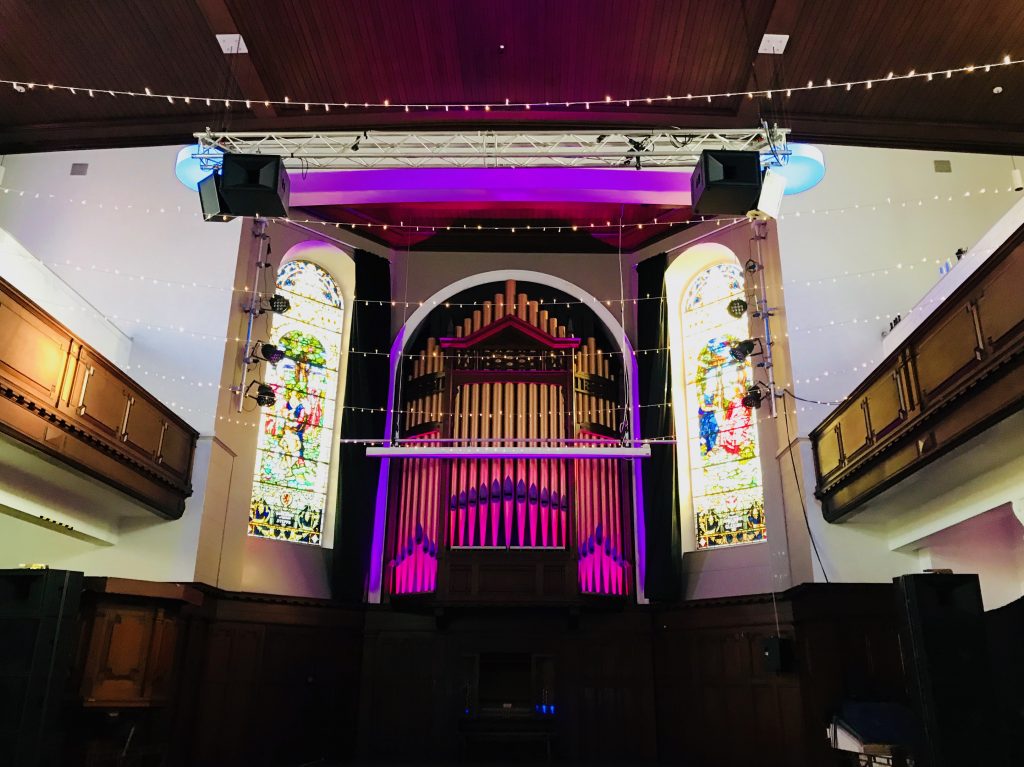 Our Glasgow Music Tour ended with a trip to one of Glasgow’s newest music venue ventures. Saint Luke’s, built in 1836 was a functioning church however due to a decline in attendance, it closed down in 2012. A refurb started early in 2015 to turn the building into a live entertainment venue. The Glasgow Awards named it the Best Live Music Venue 2017. The church now hosts bands, conferences, functions, private parties and weddings.

Build onto the side of Saint Luke’s is the Winged Ox Restaurant and Bar. The Winged Ox also won Scottish Bar of the Year 2017 from the Scottish Bar & Pub Awards, which really is an achievement in itself.

This is where our Glasgow Music Tour ended. We were visiting the city as part of our Year of Young People celebrations, therefore our tour was more of a mash up of a few different tours. If you would to check out what tours are available, please have a look at the Glasgow City Music Tours site.

We would like to express our special thanks to Visit Scotland for organising our tour and to Fiona from Glasgow City Music Tours who navigated our group around the streets and great music venues of Glasgow.