Is it because we are that used to being out in the hills of the Highlands that biding in the big smoke with 836 options on Deliveroo is an absolute novelty? Or is it that Glasgow and cultural cuisine go together hand in hand? I can’t say for sure (well, not yet anyway), but what I do know is that we have indulged in a lot of sushi, noodles, dumplings and ramen in Glasgow since we (kind of) moved here. We don’t actually live here *insert perplexed emoji*. But we do live here for now, and for the foreseeable. Just not in a house, but in a van. Nothing is normal about us right now or ever. But take the Glasgow ramen food scene and van living and you get all manner of snazzy food deliveries to Van Heilan. But with this feast, we went oot on the toon, to Maki & Ramen Glasgow, for the first of our Glasgow city food reviews in about, maybe 3 years. 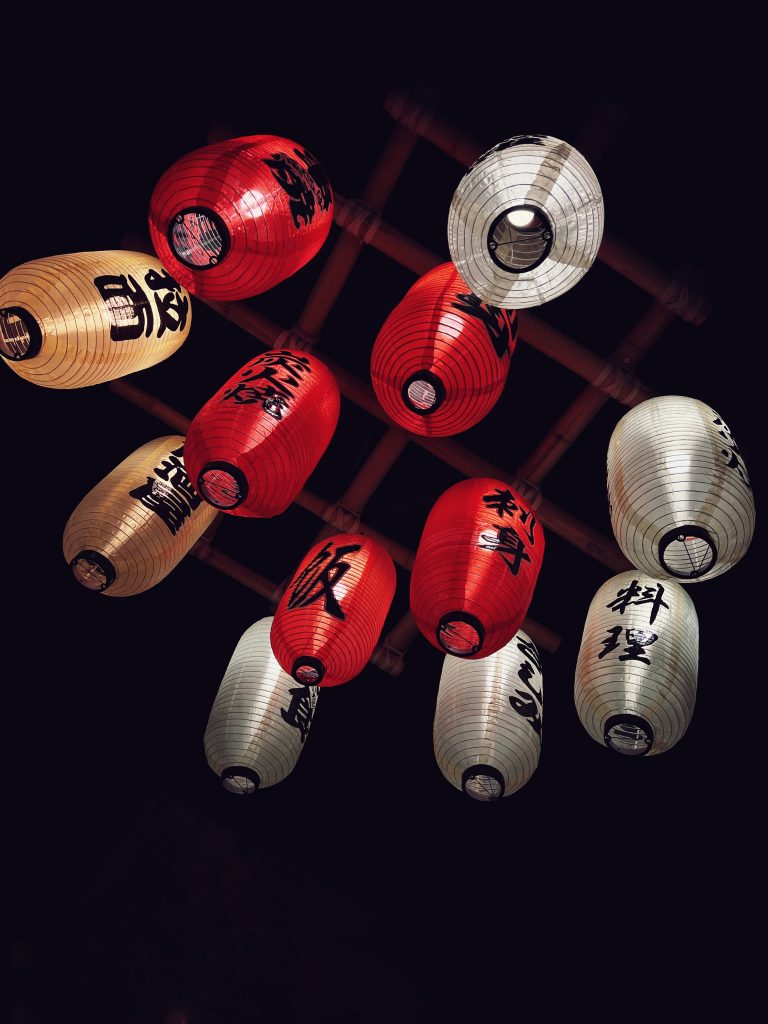 We took my wee brother (he’s not wee, he’s 6 foot 500 and 24 but he’s wee-er than me so he’s wee) out to Maki & Ramen with us, for his first Japanese experience, and for his first time out on the blog. His face was a picture when he saw the Maki & Ramen menu, and when he tried the hefty salmon sashimi and tasty ramen, but also when he realised his food was not his until my camera had it insta-worthy. Taking him was mutually agreeable though as there was no way I was navigating the Glasgow subway system and finding this amazing sushi and ramen restaurant post-booster. This guy knows these streets and has literally memorised the sequence of the Byres Road traffic lights. He got us there in circa 9 minutes. 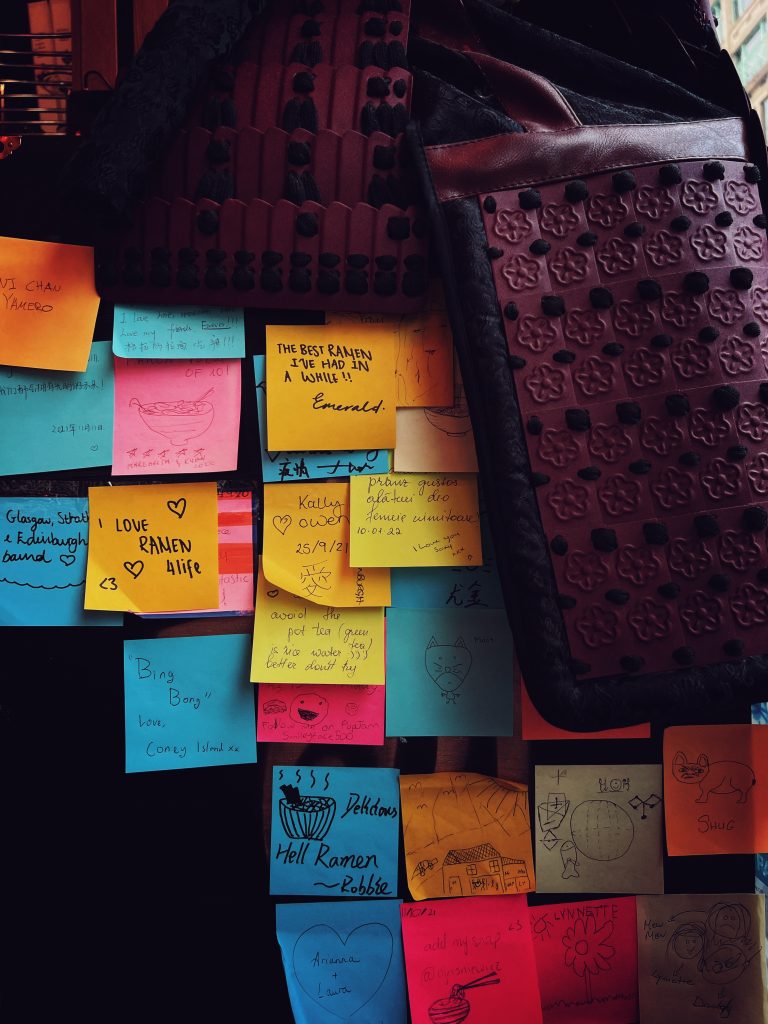 Maki & Ramen is on Bath Street in Glasgow, which is a stone’s throw from Buchanan Street. And Buchanan Street is right in the heart of Glasgow City Centre. There are a few other Maki & Ramen restaurants in nearby Edinburgh too. The Glasgow branch is a vibe both inside and out. It’s cosy, quirky, funky, casual and provides ample window seating for people watching. Or Deliveroo driver watching. Probably packing our dumplings for later. Or noodles, because the noodles in Glasgow aren’t like anywhere else noodles. These noodles are the poodle’s. 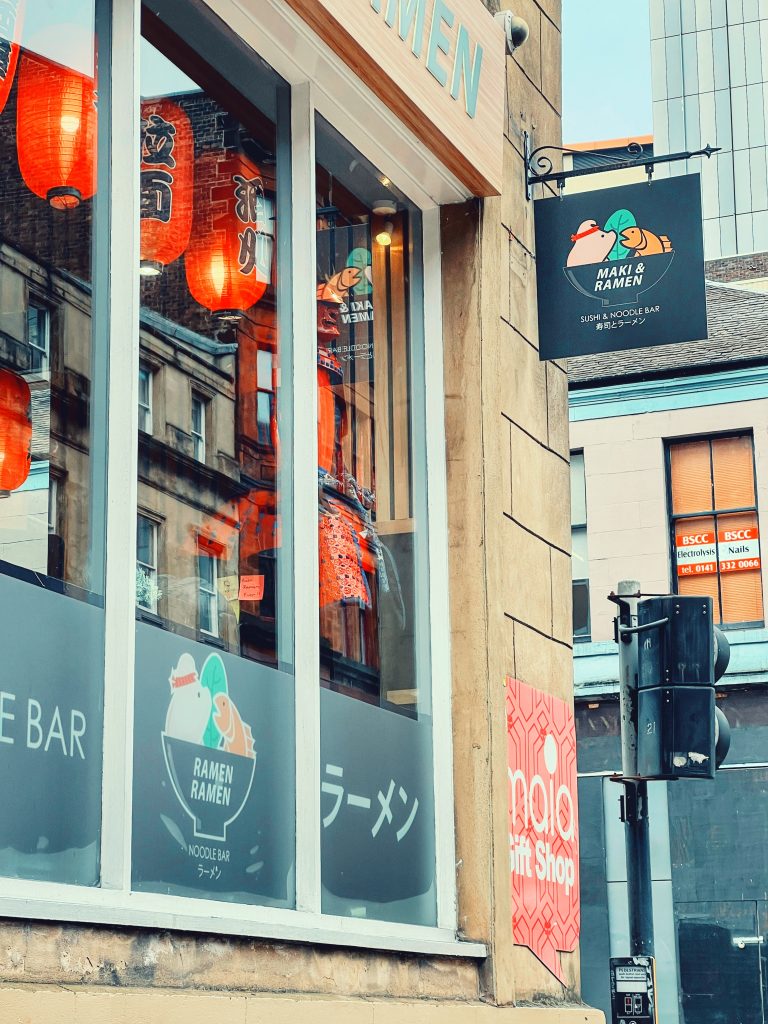 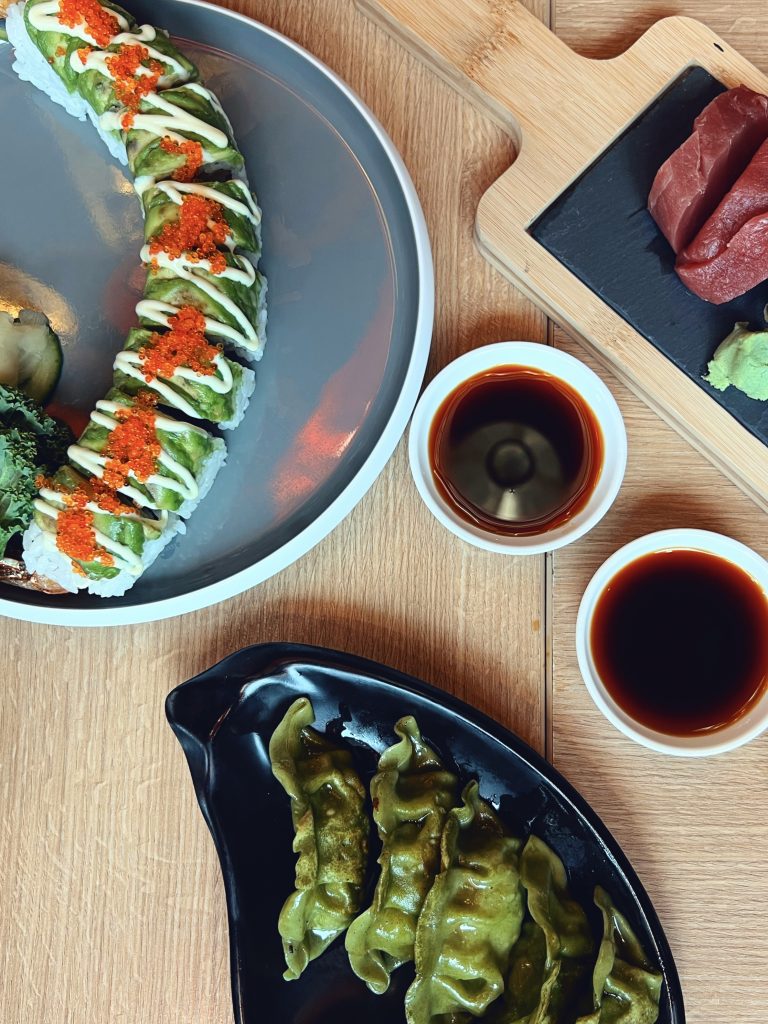 The Maki & Ramen menu is stunning with so many noodle, ramen and sushi options. But, I have a new bestie; the Green Dragon Roll. If you haven’t yet indulged in a tempura prawn sushi roll topped with avocado, fish roe and mayo, I’m sorry but now is your time to shine. The portions were massive too. We kind of ordered a bunch of random between us and just picked at everything. That Green Dragon Roll though. Can I say moist? I mean, I’m saying moist. But also, crunchy. Gorgeous and an ample companion for people-watching from a cosy window seat. 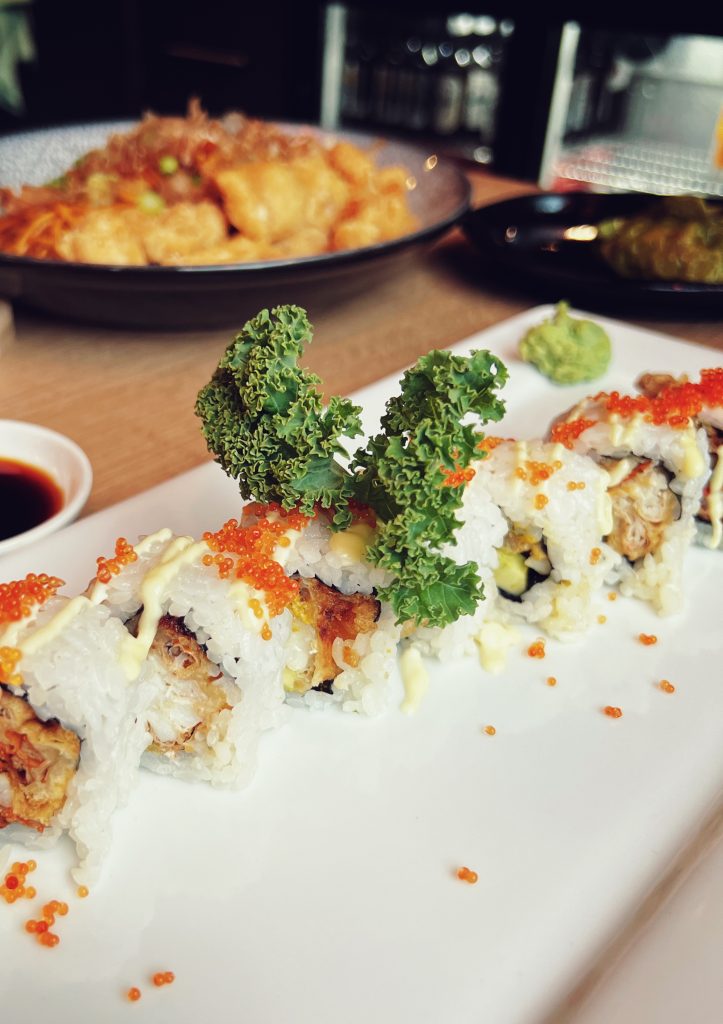 My other half got stuck into Three Kind Sashimi. Raw tuna, sea bass and salmon to be exact. Where raw goes, Scott goes. He loves super fresh fish. I love him (I know, awwww) so Scott gets sashimi. I wasn’t involved in that one, not my jam. Besides, Green Dragon Roll amiright? My wee bro tried his first salmon sashimi, although, by this point, he was too full up on chicken karaage yakisoba noodles, which again, huuuuge portions. Maki & Ramen don’t scrounge on portions. We ordered more than we needed to due to, well, we didn’t expect bowls the size of basins and sushi snakes. No jokes. We also ordered some veggie gyoza which was a veggie gyo-YES and a soft shell crab roll to share. The company loved it when I broke into Blue Planet on the life and times of crabs. Love crabs. Crab meat is juicaay. 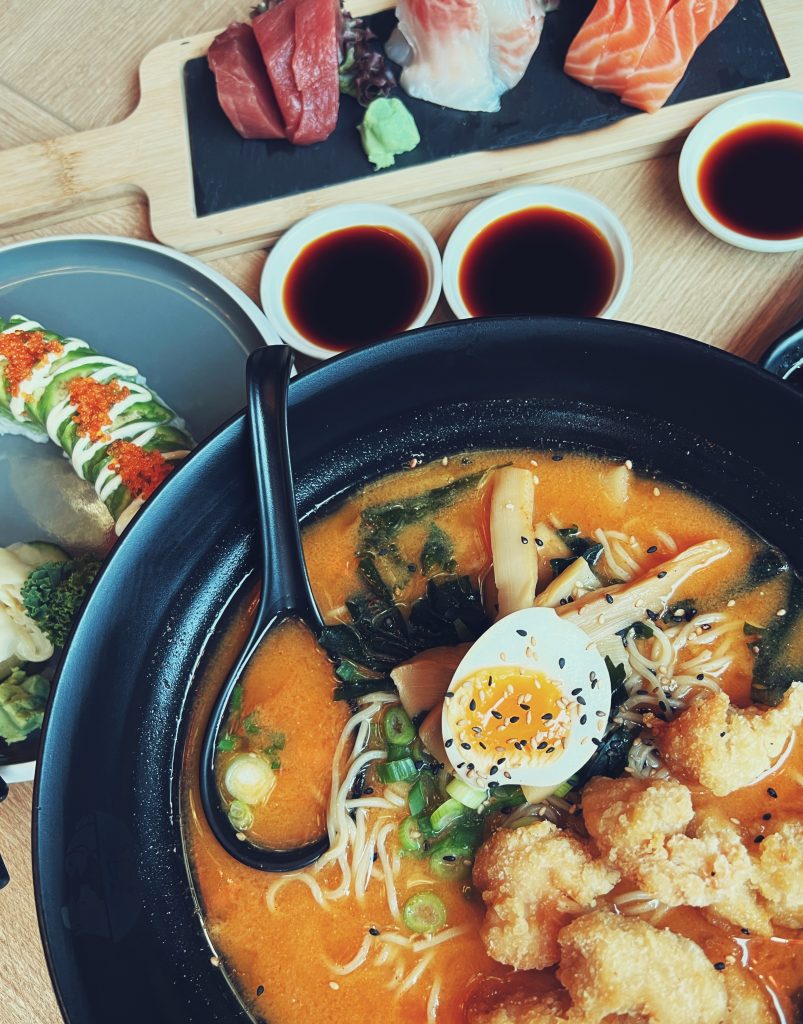 I had a huge bowl of chicken karaage ramen with a soft boiled egg topper. Lush stuff. Completely hearty and warming on a Monday afternoon in January in Glasgow. Let’s all go there on Mondays. 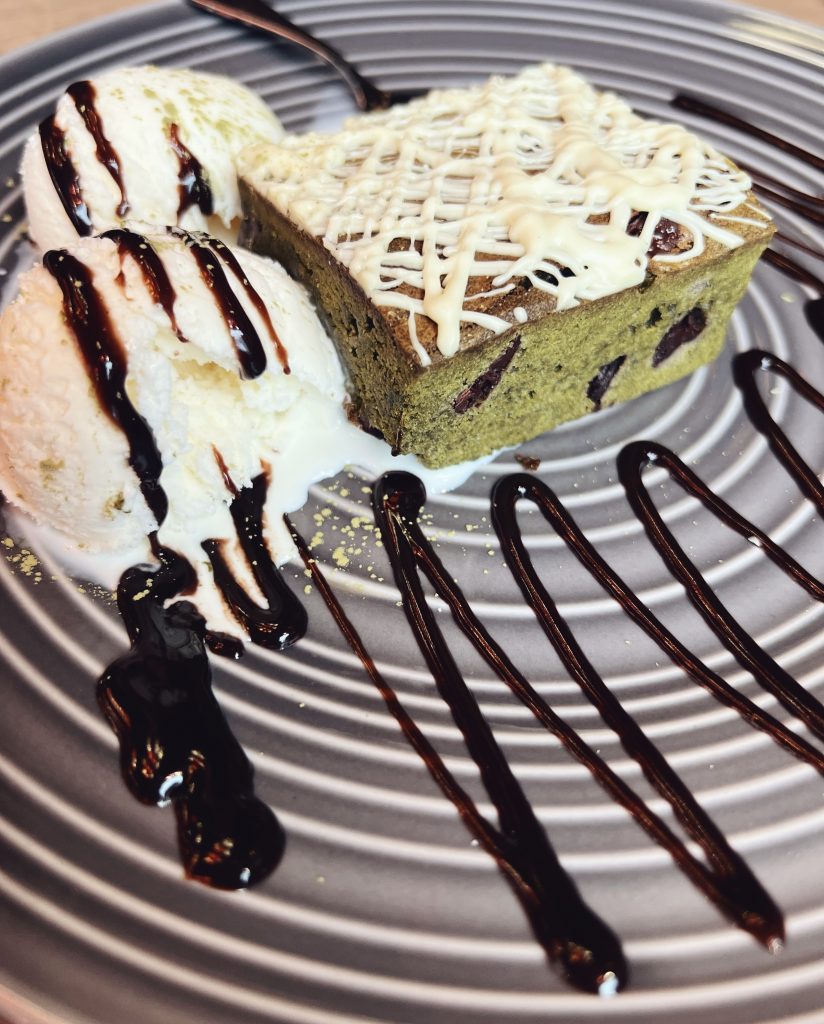 My wee bro thought he was getting a chocolate brownie so his “why is it green” face would have alarmed Shrek. But like Shrek, he absolutely loved it. Didn’t leave a scraping. It was soooo fine. Matcha tea brownies are the new brown. 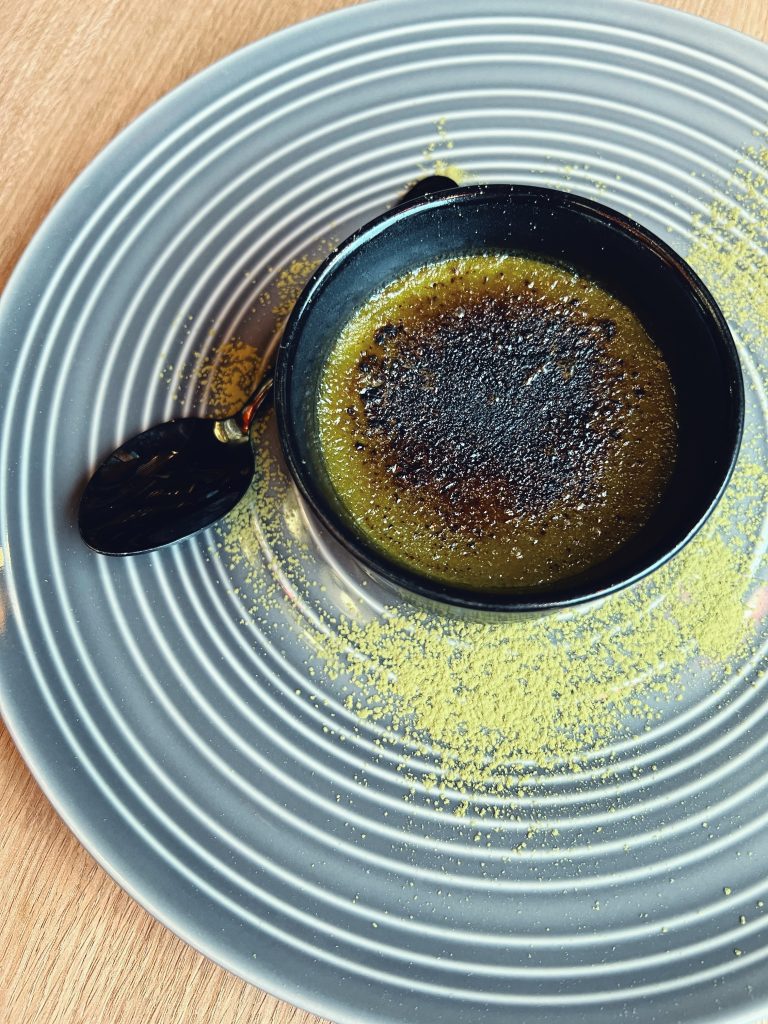 As was the Matcha tea crème brulée my other half scoffed. Meanwhile, I mochi-mooned. Mochi are cute wee baby rice bun things. They’re chewy and served cold. I’m probably not selling them well, but why would I when Maki & Ramen in Glasgow are selling them like hotcakes, or cold buns, to me and many moons more. 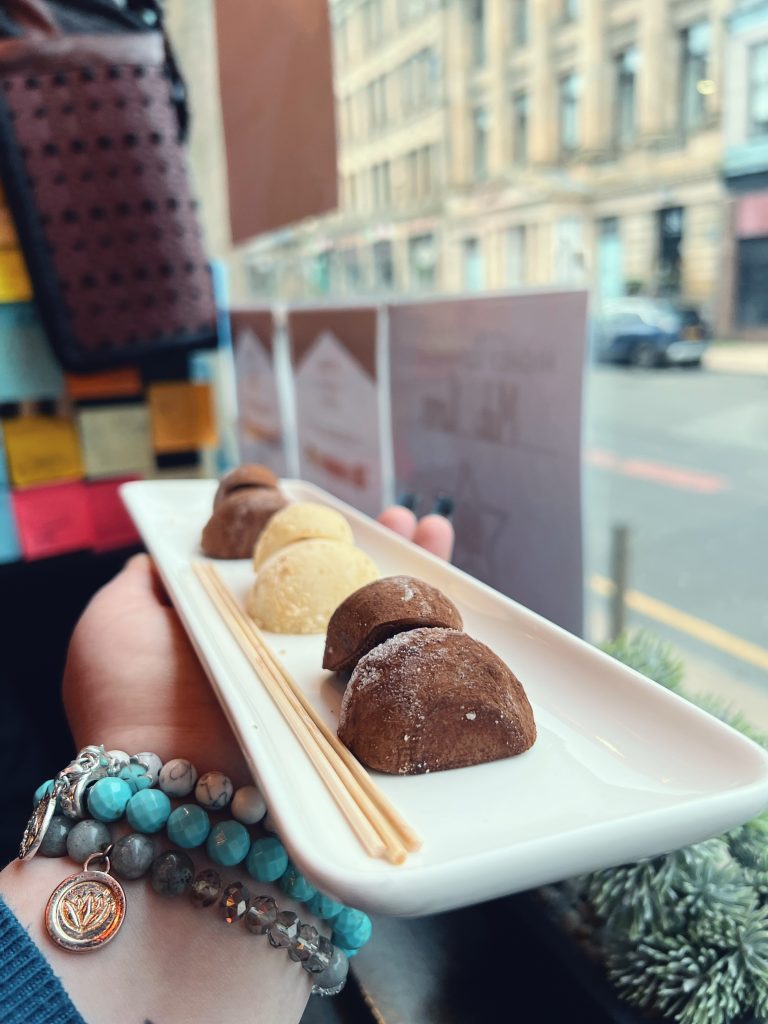 I love mochi, and my wee mochi moons filled with vanilla and chocolate set me off for a glorious Monday evening ahead. 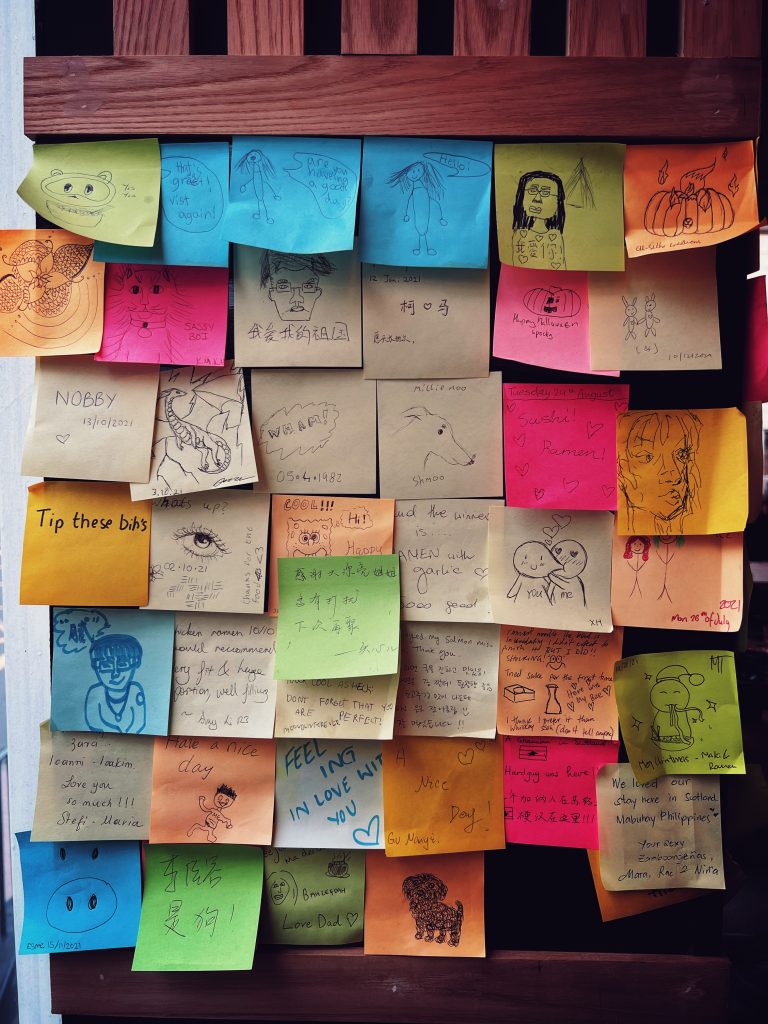 So, if you’re looking for a quality Japanese restaurant in Glasgow that does big portions, a good atmosphere, ample people watching and cosy comforts with cheery staff, make it Maki & Ramen. I’ll be back, or the Deliveroo guy will be seeing me again sooner than he planned. Cheers for having us team Maki!

You’ll find the Maki and Ramen menu on their website, but take it from me, this isn’t good scran, this is warming, hefty scran in a cracking atmosphere.