It was the weekend and we were on our way to Amarillo or as it’s better known, Loch Lomond (I don’t get out much). Paula the Passat was tired from her North East shopping jaunts and needed some R&R. This wasn’t a bother but there was no way I was walking from Cruden Bay to the affa bonnie banks of Loch Lomond. So…being the blogging boss that I am, I sent for a motor. That makes it sound really glamorous but I was actually due to be putting together a MINI Countryman review anyway. My own timing belt just happens to be on point.

So here we were, lost in Altens. There is literally no point in telling Scott to turn on the sat nav. He is an Aberdonian and he “knows his city.” Apparently it makes perfect sense to spend £69 on a sat nav and then use it purely for iPhone screen art.  After driving up and down the same road 42 times whilst Scott repeatedly said “aye but this part of the road’s new.”, we finally kick-started the Tom-tom and soon touched doon in John Clark toon.

Here we were in a white, racing-striped MINI Cooper Countryman raring to go for a weekend of gallivanting round Loch Lomond and the Trossachs. And trust me, we gallivanted… 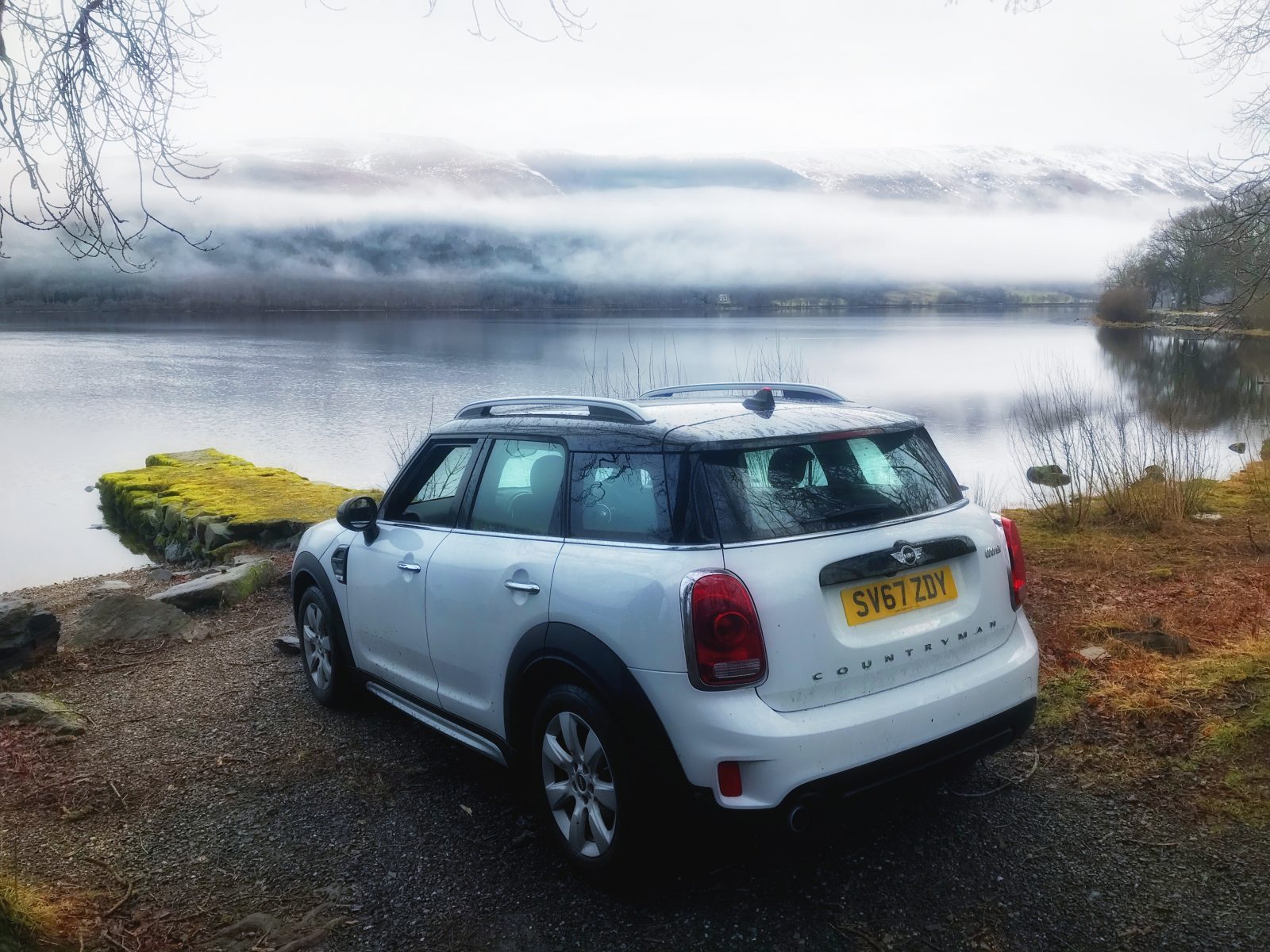 After leaving the dealership, we were immediately plunged into rush hour traffic. This gave us a bit time to figure out what all the techno-flashing and shiny buttons did before we hit the open road. The steering was light and extremely sharp with a really good turning circle. In Paula the Passat, it feels a little bit like steering a broken down tank or a Scottish cliff so this was a pleasant change. You immediately feel like this car was designed to be fun to drive.

By the time Stirling Castle came into view, the automatic headlights had kicked in and the visibility on the dipped beam alone was amazing. The dual carriageway soon ended leaving us on a pretty storm-damaged road to Loch Lomond. The Countryman handled all the potholes and obstacles with ease. This is something that Paula the Passat struggles with, she struggles on flat well-maintained roads, we would have been clean on the phone to the AA.

The Countryman is very spacious inside with plenty of nooks and crannies for all your bits and bobs. For me this was a blessing seeing as I can’t be without all of my items at any given time. The high driving position gives a great view of the road and the car has loads of grip for its size. The rain may have been bucketing down but we were quite happy in our heated seats as we stormed down the high roads and the low roads to Loch Lomond… 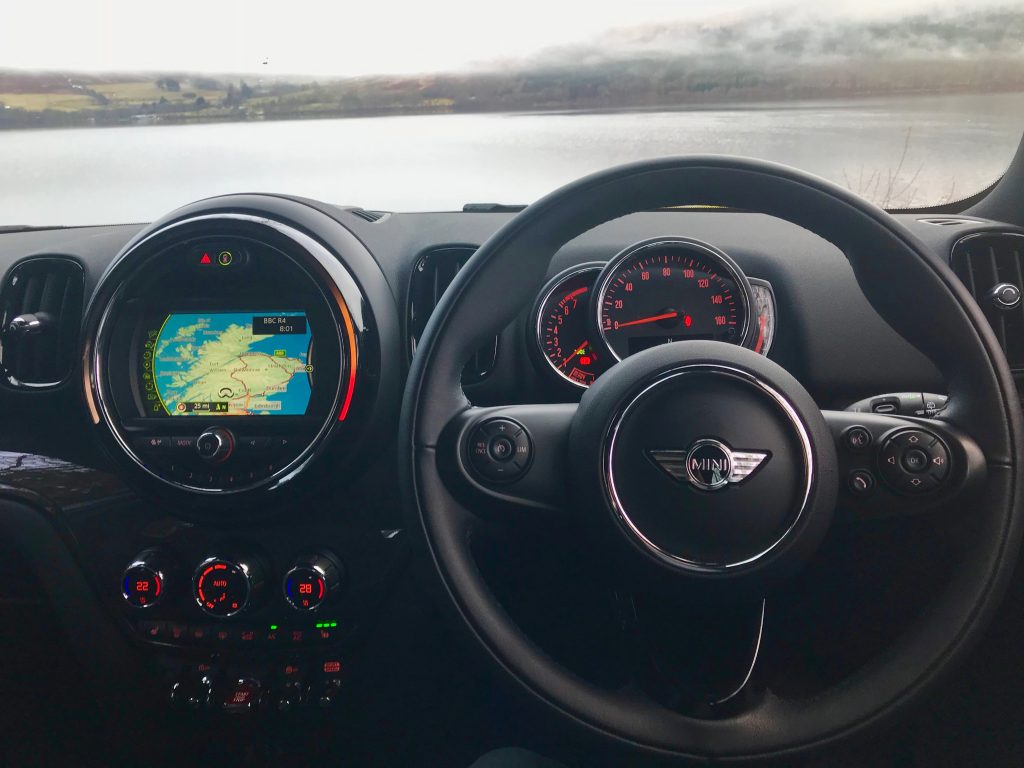 The dash had more lights and combinations than a Christmas tree. The centre console flashes different colours to alert you of different things. We asked no questions when we picked up the car so we may have looked like a travelling disco show for a little while before we figured out exactly what the car was trying to tell us. The switches were reminiscent of a cockpit with a large red starter switch taking pride of place in the middle.

A click wheel, similar to BMW’s iDrive controls everything on the main screen including the Sat Nav, radio, hands-free calling and connected devices.

Sitting inside such a funky and quirky car certainly put a smile on my face. The interior and trim was of a high standard and so far removed from the cold, corporate feel of some other car brands. 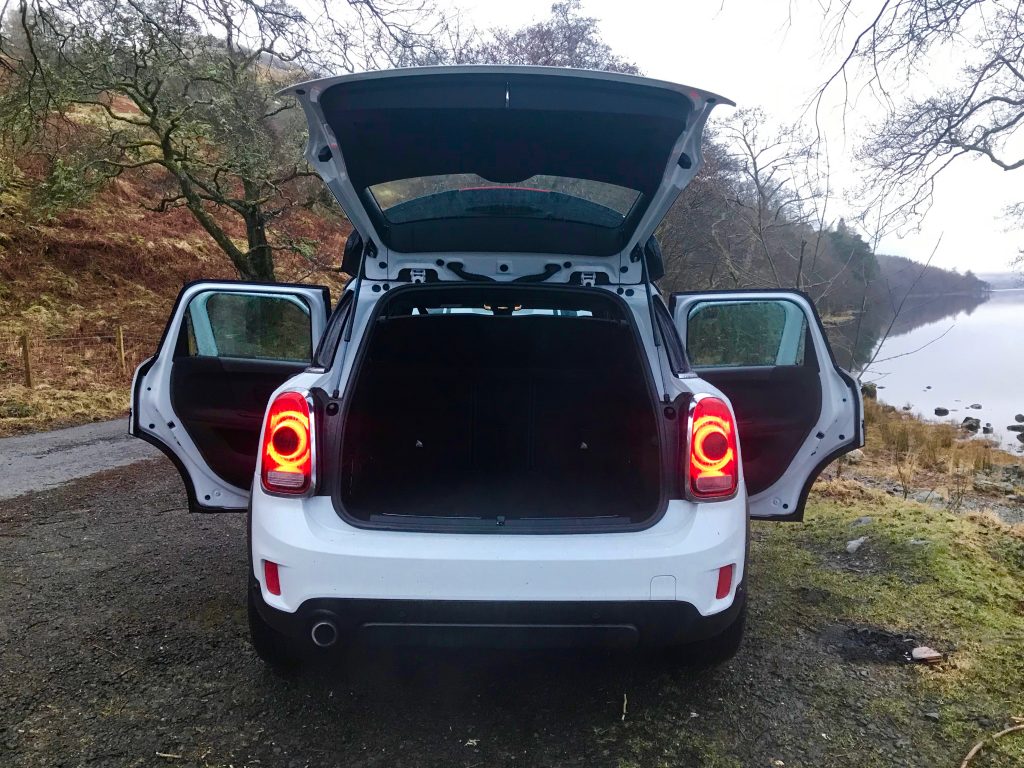 The boot has a 450-litre capacity, way more than an average hatchback. The seats fold down so you can fit a fridge, washing machine or small kangaroo in the back. So there was JUST enough space for my weekends luggage ken? I may be a travel blogger but I certainly have not mastered the art of travelling light. The rear seats have loads of leg room, so your long-legged friends can fit in it with ease. 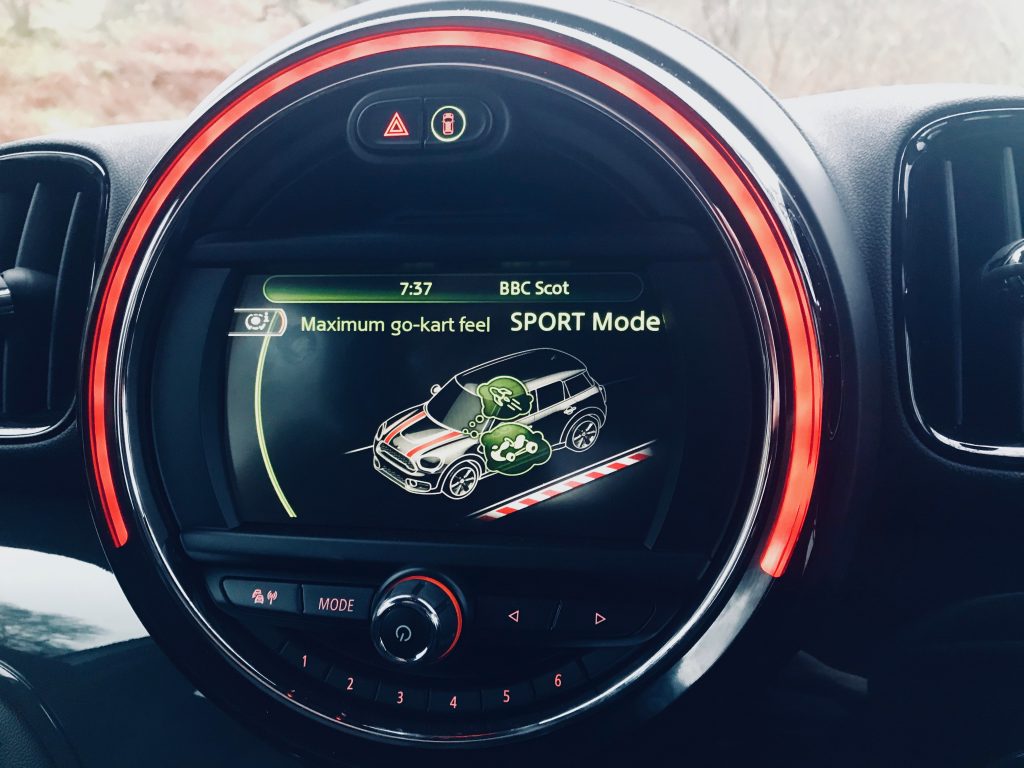 The car came with 3 different driving modes – Green, Mid and Sport. With the eco-friendly setting on, the car felt way less responsive but was perfect for cruising down a dual carriageway with the cruise control on. Town and main road driving called for Mid mode, putting the MINI in its standard fun driving state. Sport mode gives the Countryman an instant boost of power and made the throttle far more responsive and even more fun to drive. Perfect for a quick overtake or that idyllic mountainside road. 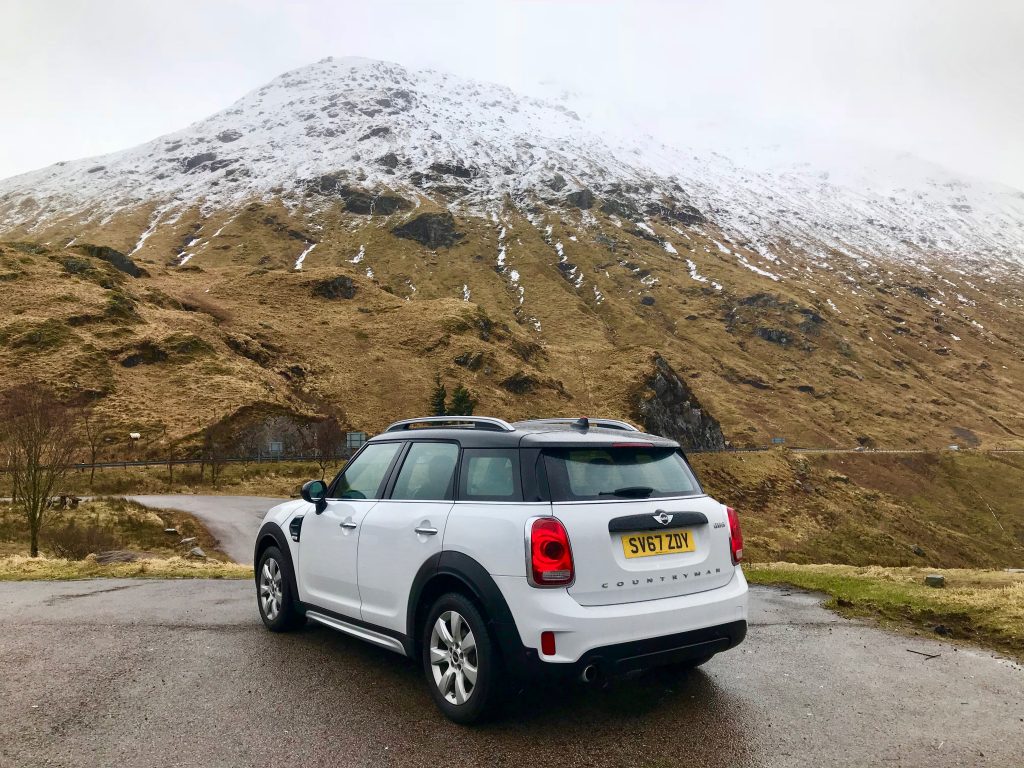 Our car was a 1.5-litre, petrol, 134 horsepower MINI Cooper Countryman. Other models include 4×4’s and diesels.

What I haven’t told you so far is that this little baby was more than just a nice piece of tin on 4 wheels. We actually got quite attached to her during our passionate weekend together. We named her Michty, a fine Aberdonian name… Michty was well dressed, welcoming and she was the perfect countryman. Handing her back was beyond painful and I had a wee greet. If John Clark ever get into the habit of gifting MINIs to enthusiastic, driven bloggers, I had better be first on that list.

Don’t worry, this tale doesn’t end in tragedy. It is possible to pick up your very own Michty for a test drive or find many a MINI Countryman for sale at MINI in Aberdeen. You then have two options. You can either gift it to us, where we will never give it back. Or, you can write your very own Mini Countryman review but it will never be as good as mine.

We would like to express our thanks to John Clark in Aberdeen for making us fall in love with a vehicle whose well-being we genuinely worry about on a day to day basis. Look after her for us.