And about time too. We have been spending way too much time out in the old Cruden Bay, it was about time someone dragged us out of our loungewear and gave us a social life. This seems to be happening more and more these days. For two people who don’t really like people, we are starting to spend way more time with people. And we’re starting to like them. Our dog, on the other hand, hates our new socialite status, which begs the question, when is someone gonna invite Callie along to one of our soirées? That poor dog can smell the aye life of us and I reckon she’s getting just a wee bit jelly. This evenings dinnertainment was served at Molly’s Bistro, the restaurant within the Aberdeen Douglas Hotel. And I was hungry like the wolf.

I could be your grill-friend

Hey hey you you, I’m ordering calamari. Because why not get squiddy with it? And I was ten times surprised to see that the calamari arrived grilled in luscious fishy strips and not deep-fried and clarted in batter. Don’t get me wrong, I can nail deep-fried calamari on any given Tuesday, but grilled squid was ‘affa’ fine for a change. Served with a bruschetta-esque salad and garlic mayo. 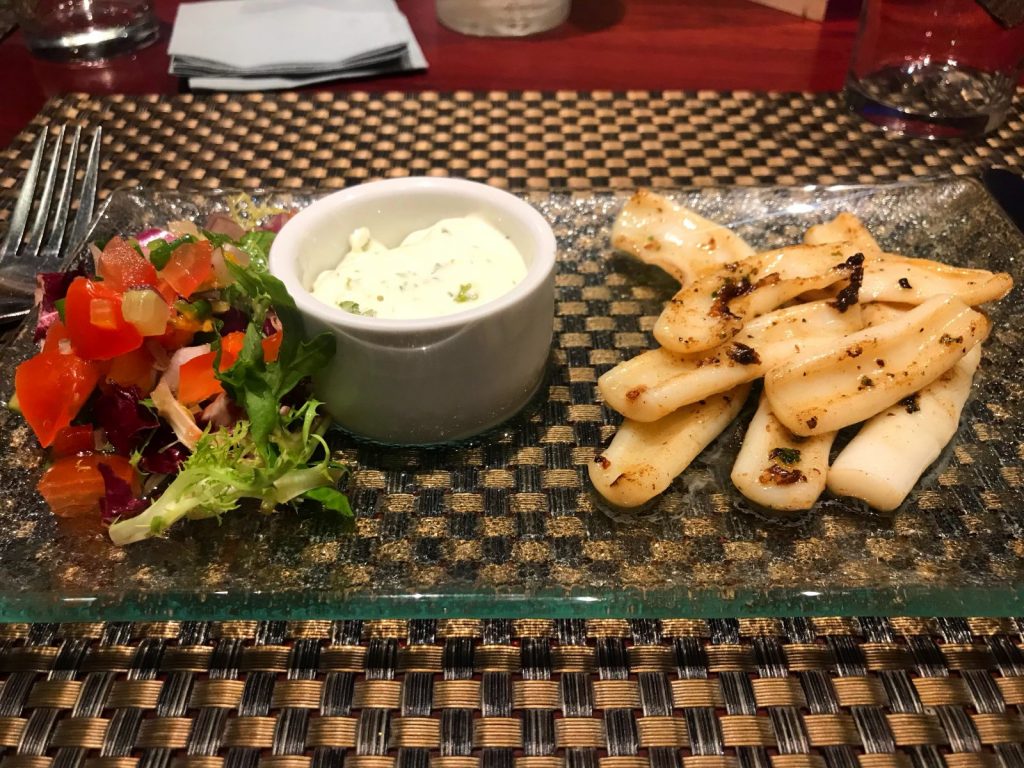 Aye 2.0 ordered soup. Which is so out of character. Usually, he orders something weird and raw that nobody can pronounce. This time? Chicken and sweetcorn soup. The poor boy was just shattered, I don’t think he could muster up the energy to even look for his normal weird-ulence on the menu. The soup was the perfect antidote to a cold Autumn evening. 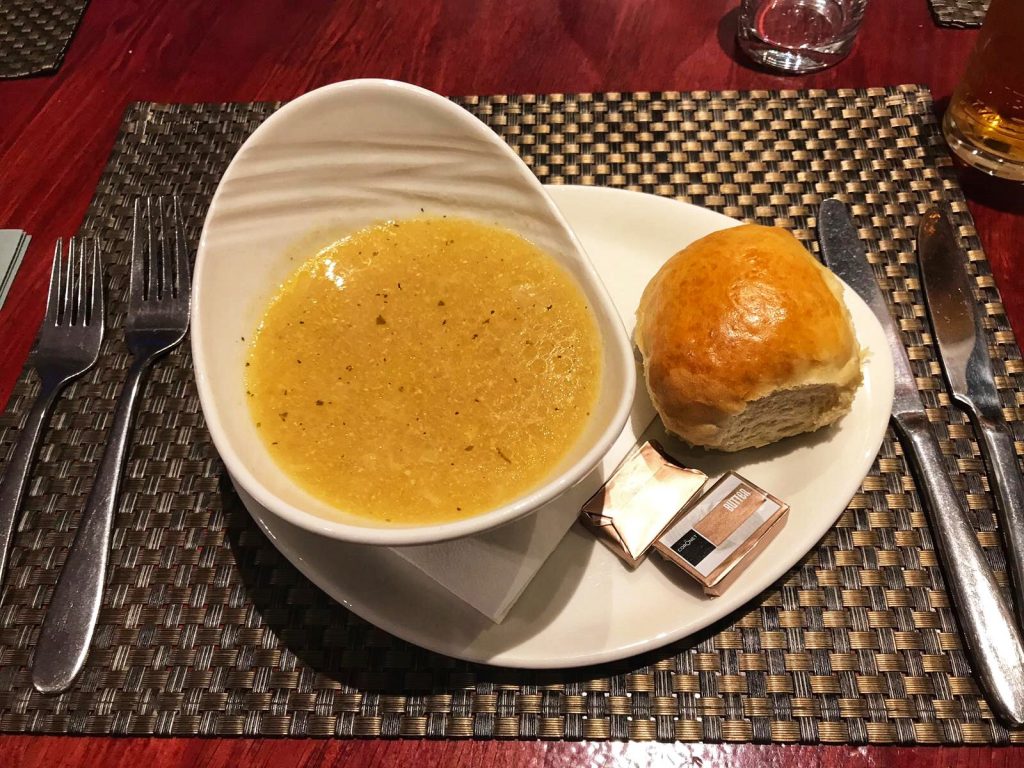 That steak is a rare find

And it doesn’t get much better than that. Never in all my days have I been so concerned about the threat of gout. Literally, if we eat out anymore over the next few months, I fear for our feet. All that finery. All that local finery. I had a locally sourced (Aberdeen cow) steak, rare as the day it walked, alongside mushrooms, chips, tomato, and a peppercorn and brandy sauce. The steak was banging. The sauce was too boozy for me (I know right? is that even possible?) The sauce actually paired lovely with the steak but it overpowered the other components. So if you get the steak, ask for a little less brandy or get a different sauce. Or just woman up and take it. 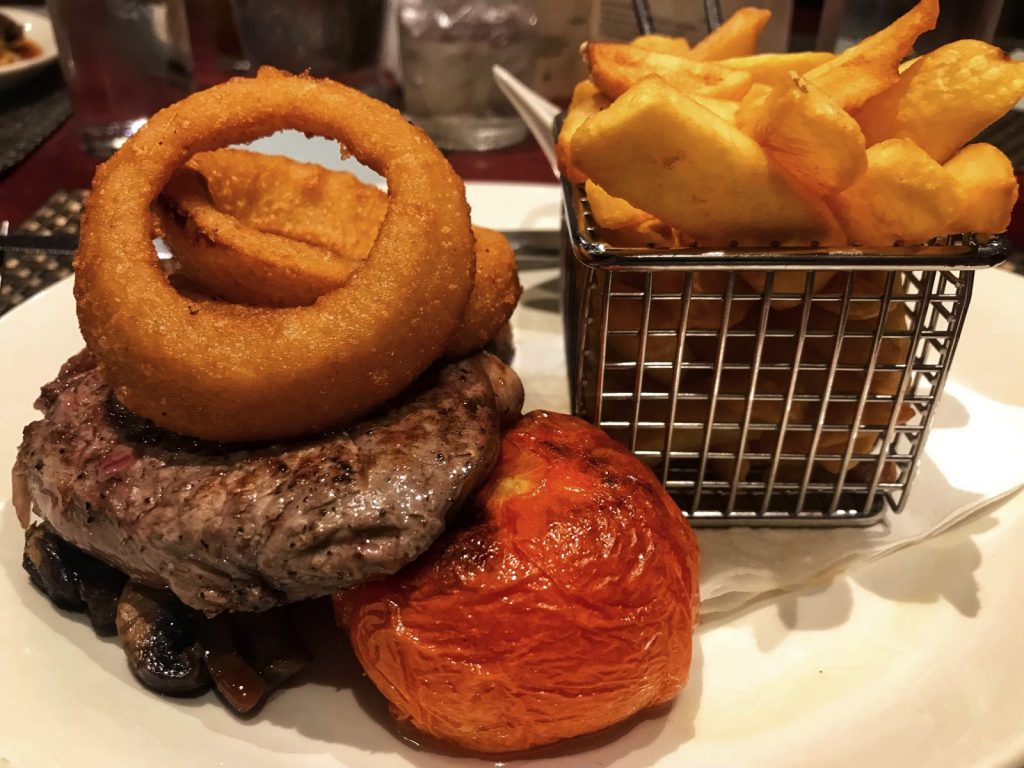 Aye 2.0, had confit duck with sautéed garlic potatoes (which I stole), stir fry veggies and a juniper berry and raspberry jus. The duck was crispy and flavoursome and was only complimented by the other elements on the dish. 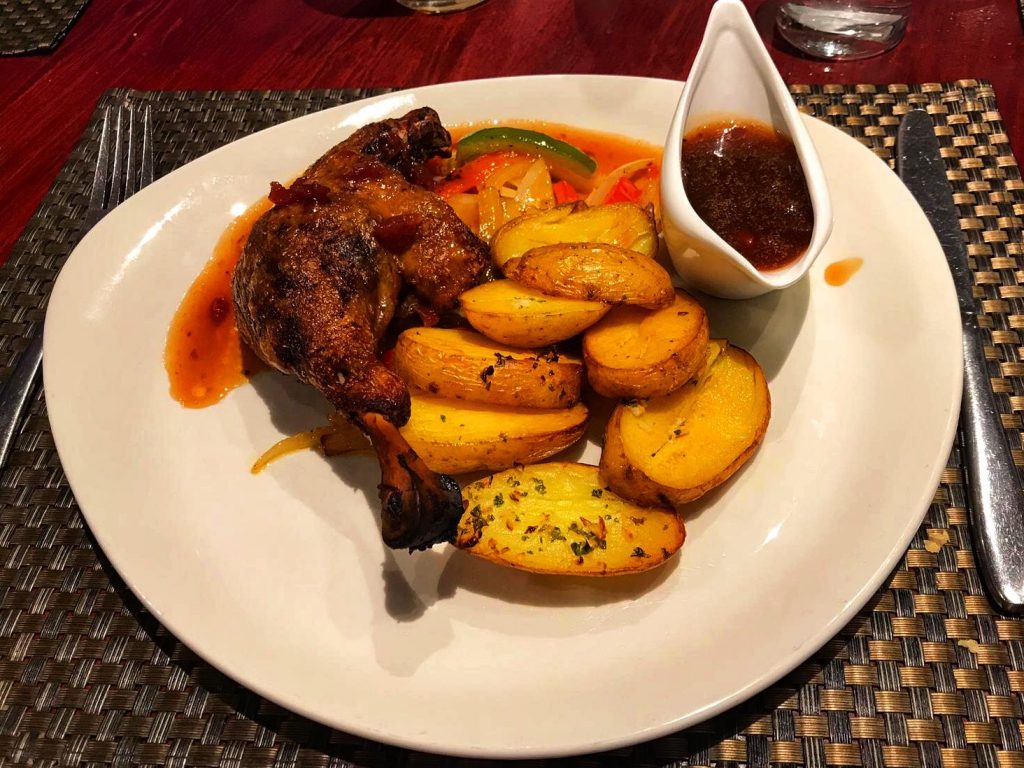 When I was a kid, my nanna often used to take me to a restaurant in Inverness for banana splits. A banana split is a banana, split down the middle (although you probably saw that part coming). Usually, it is filled with ice cream and chocolate sauce. There are many variations of the dessert, although the ones I had were extra special because 1, I shared them with my nanna and 2, because they arrived with sparklers on them. When you are 6, that is life goals. 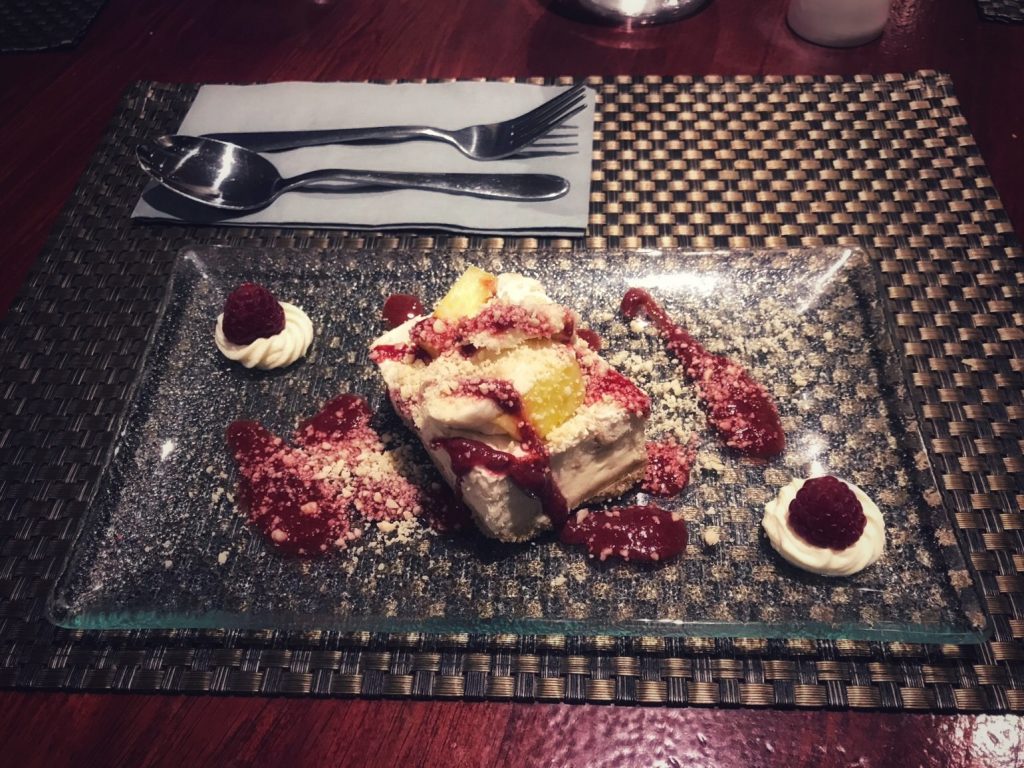 So, when I saw a banana split cheesecake on the dessert menu, I knew it had to be ours. I say ours because Aye 2.0 and I often share our plates when we’re out for dinner (not always through choice and nothing like Lady and the Tramp… well, not really…). Alongside the banana split cheesecake, we also ordered raspberry ripple waffles which arrived covered in chocolate sauce and served with raspberries, toasted honey oats, and chantilly cream. 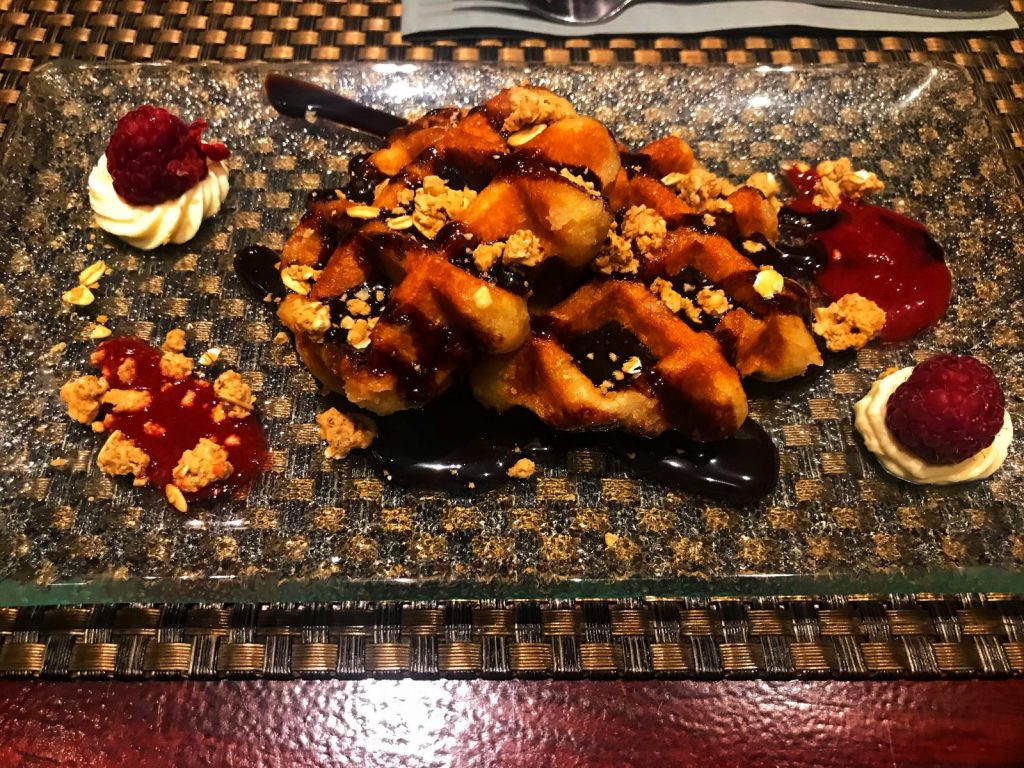 The banana split cheesecake was everything and so much more. In fact, I’m 7/10 confident that I’ll be back soon for the cheesecake alone. It totally took me back to fond memories of sitting with my nanna, sharing a banana split. The raspberry ripple waffles were also rather moreish… Unexpectedly, Molly’s Bistro is a little bit of a dessert hidden gem.

As far as Aberdeen City Centre restaurants offering good grub and relaxed yet cosy surroundings go, I would say Molly’s Bistro is bang on the mark. Our waiter, Chris, was an absolute diamond. The staff were friendly, service was fast, the food was hearty and the drinks definitely worked. Considering Molly’s is just off Union Street, the location couldn’t be better. With The Craftsman, which was awarded best Scottish Gin Bar, just across the road, you won’t be stuck for a boozy nightcap.