An emotional afternoon at the WW2 Museum

Never in the field of human conflict, was so much owed by so many, to so few. – Winston Churchill

World War 2 was the largest catastrophic event in human history, with the loss of lives from war-related death totalling over 80 million. Suffering the wrath of Hitler’s Nazi Germany, Mussolini’s Fascist Dictatorship in Italy and a belligerent Japanese empire in the Pacific, the impact was felt on a global scale. This was less than 80 years ago. The tragedy, however brutal brought around a new world order. Good wins. 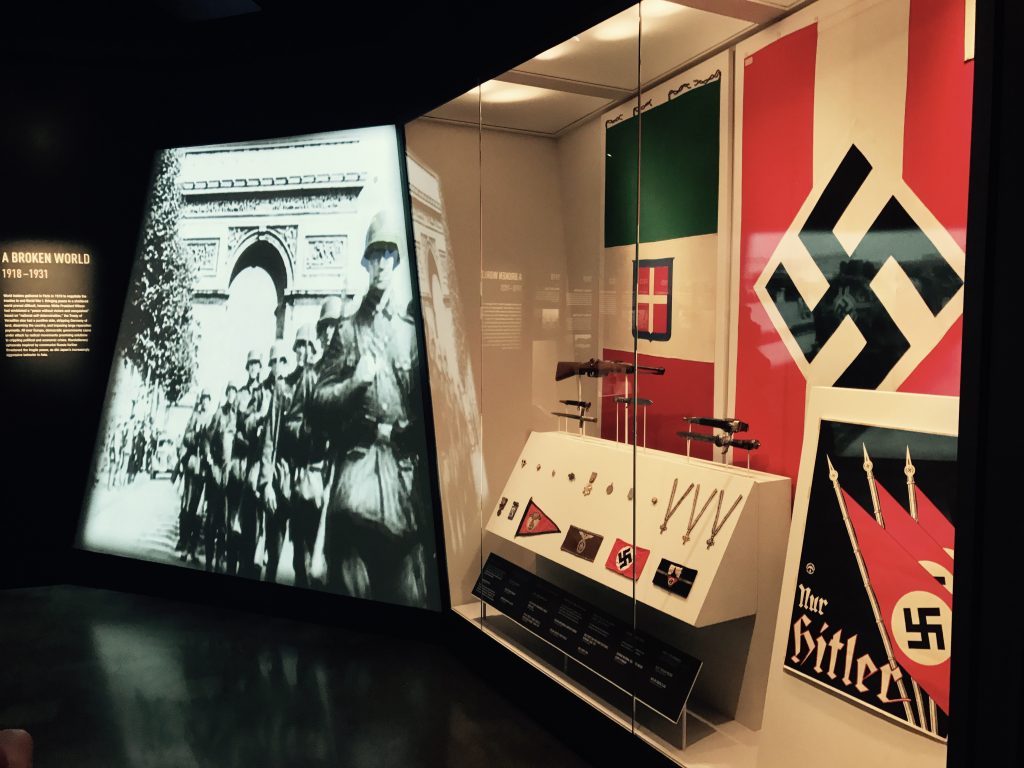 Much more than an open door

The doors opened at the WW2 Museum in New Orleans on the 56th anniversary of D-Day. Ever since then, it has attracted millions from all walks of life. The museum is a coat of many colours, encapsulating the American entry in to the war on a range of levels, from personal to technological.

We were amazed at the exterior of the buildings within the museum complex. It is really quite breath-taking with its strong silver tones protruding proudly against the New Orleans backdrop. Yet, nothing could of prepared me for the roller-coaster of emotion felt within. 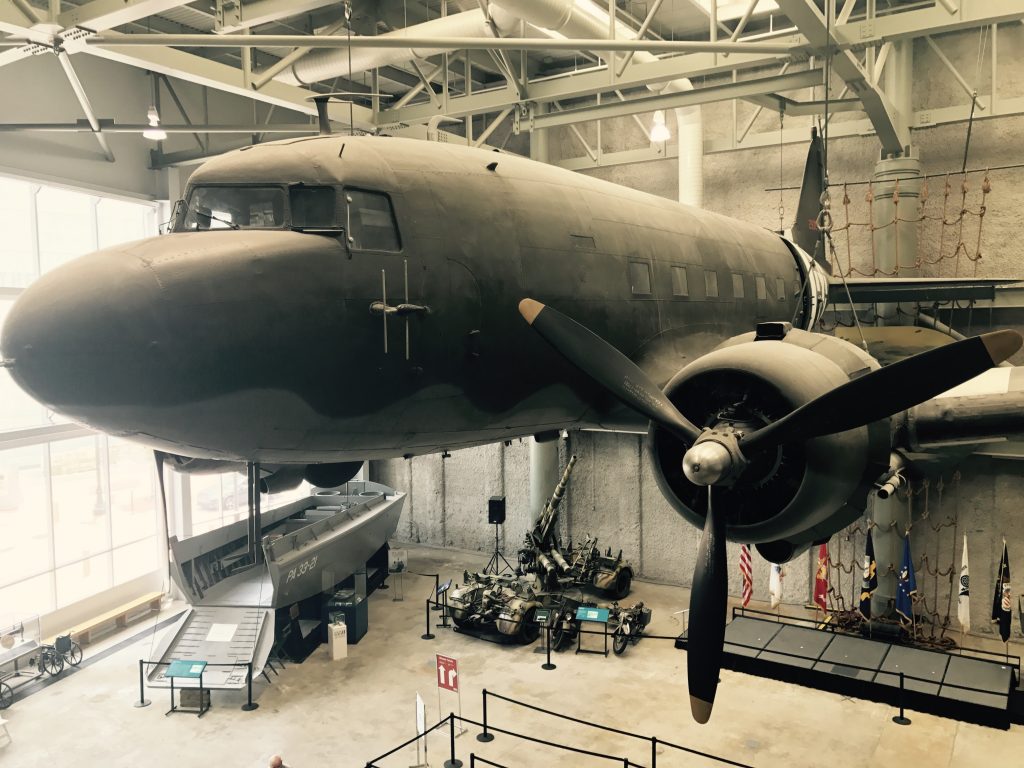 Our welcome was friendly, with an elderly gent at the door asking us about where we were from. Everybody we came across treated us like family, but that’s because we probably were. This cute wee manny wasn’t any different, telling me his grand-father was a MacDonald whilst shaking my hand proudly. 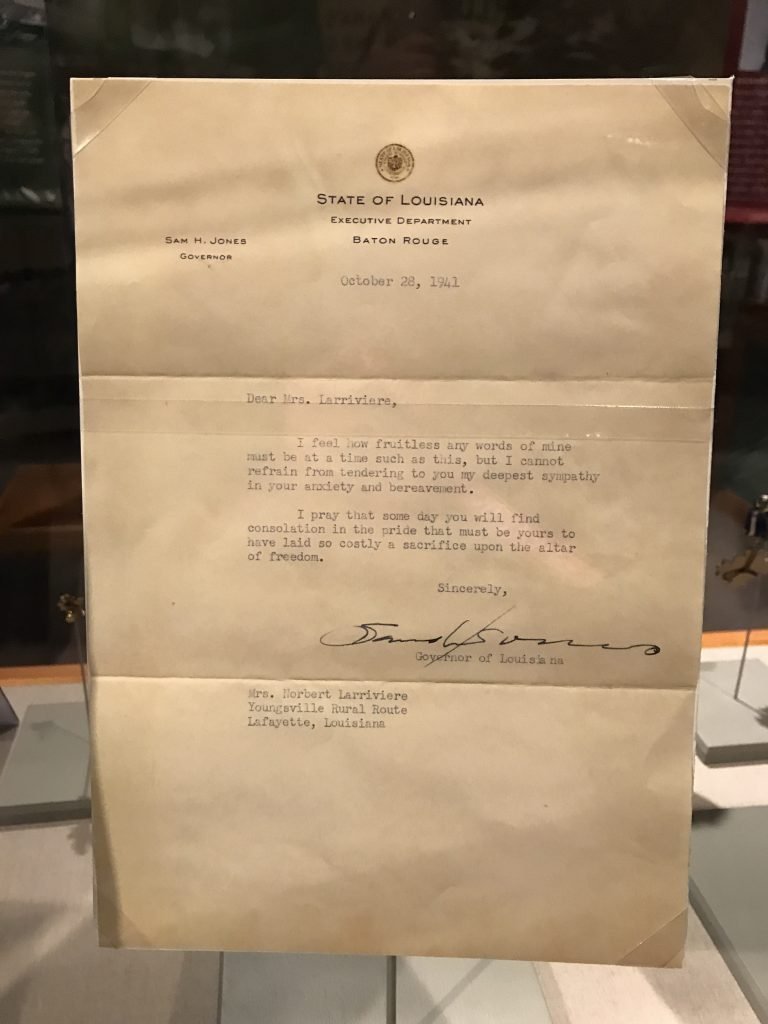 We waited in a lengthy queue to gain official explorer status. There were visitors of all different ages and ethnicities waiting to be educated. This in itself isn’t something that would of happened during WW2 where people were individually categorised by colour and age to decide their fate. 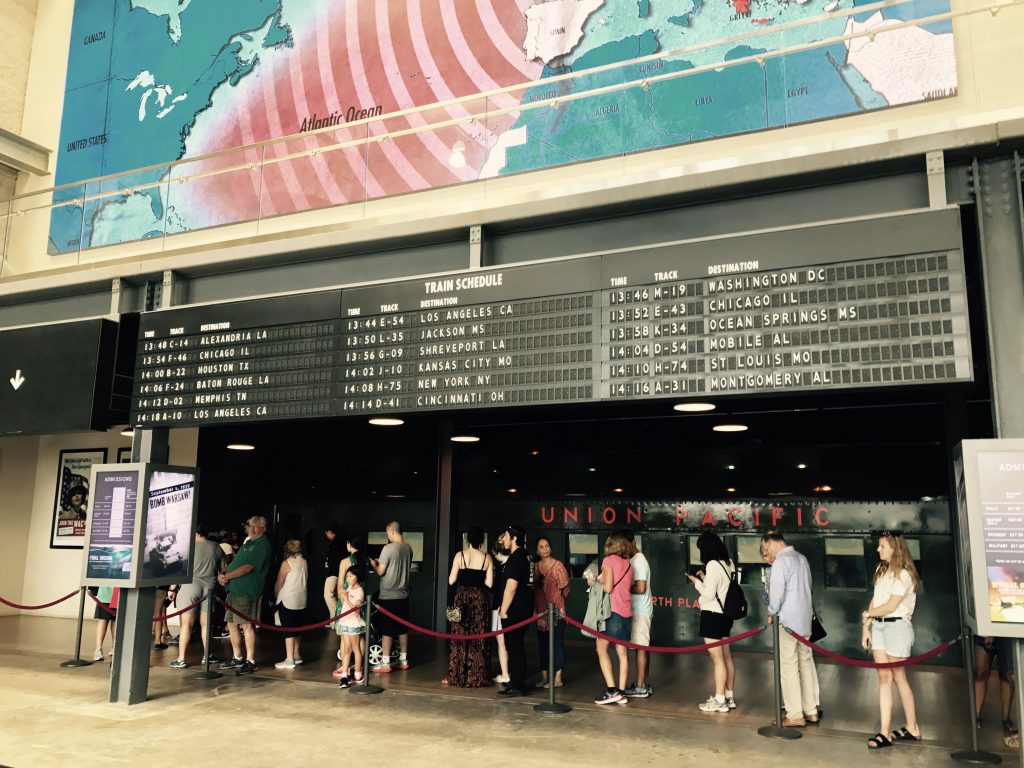 We were amazed by a breath-taking Douglas C-47 hanging overhead which Scott ensured me wouldn’t fall on my head. I have the worst luck. The Union Pacific Train Station also takes pride of place in the pavilion atrium allowing visitors to experience similar sights, sounds and emotions of going to war. Along with bad luck, I also have questionable common sense. The train times board changes regularly to provide a realistic experience. However, I was convinced for long enough that this was a genuine train station and proceeded to persuade Scott to come to Cincinnati with me. We remained in New Orleans.

The Arsenal of Democracy

I couldn’t wait to explore the newest and permanent exhibition within the WW2 museum. The Arsenal of Democracy has been incredibly showcased, providing visitors with a whole array of personal artefacts. 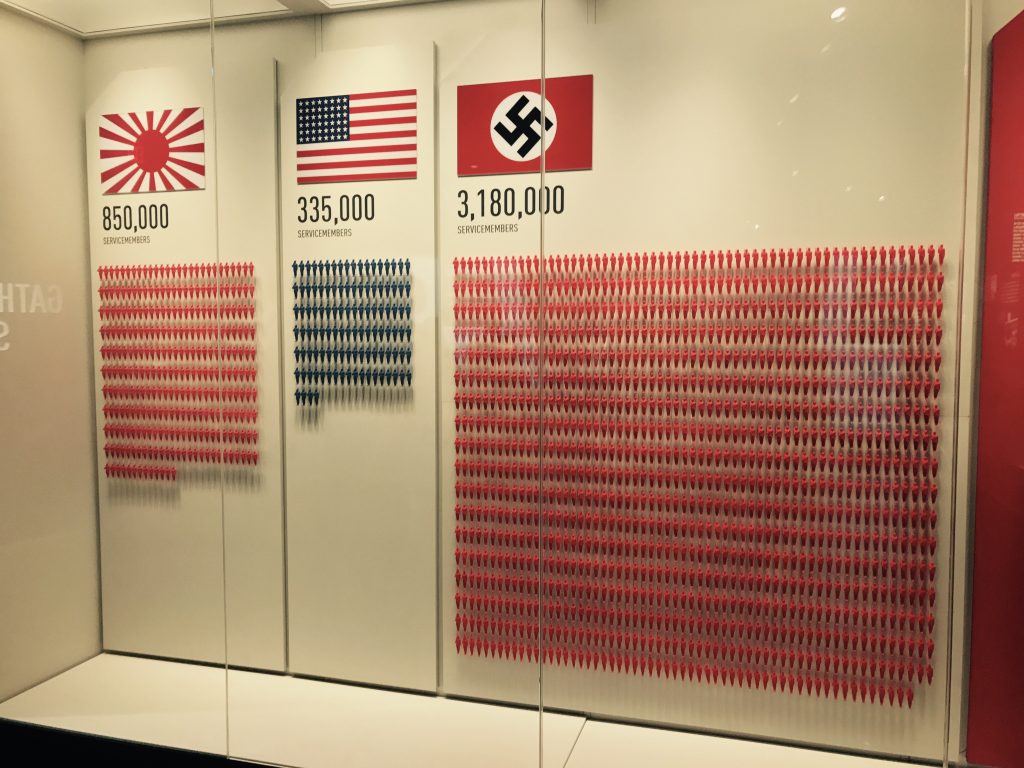 Scott and I pay a lot of attention to politics and being Scottish AND British, we know a lot about referendums and voting. This exhibit displays various charts and results of votes in the lead up to Americas entry in to the war. Initially, America wasn’t so keen on helping out the United Kingdom however as Hitlers regime escalated, the votes begun to swing in our favour. It then showed the complete change in democracy after Pearl Harbour. 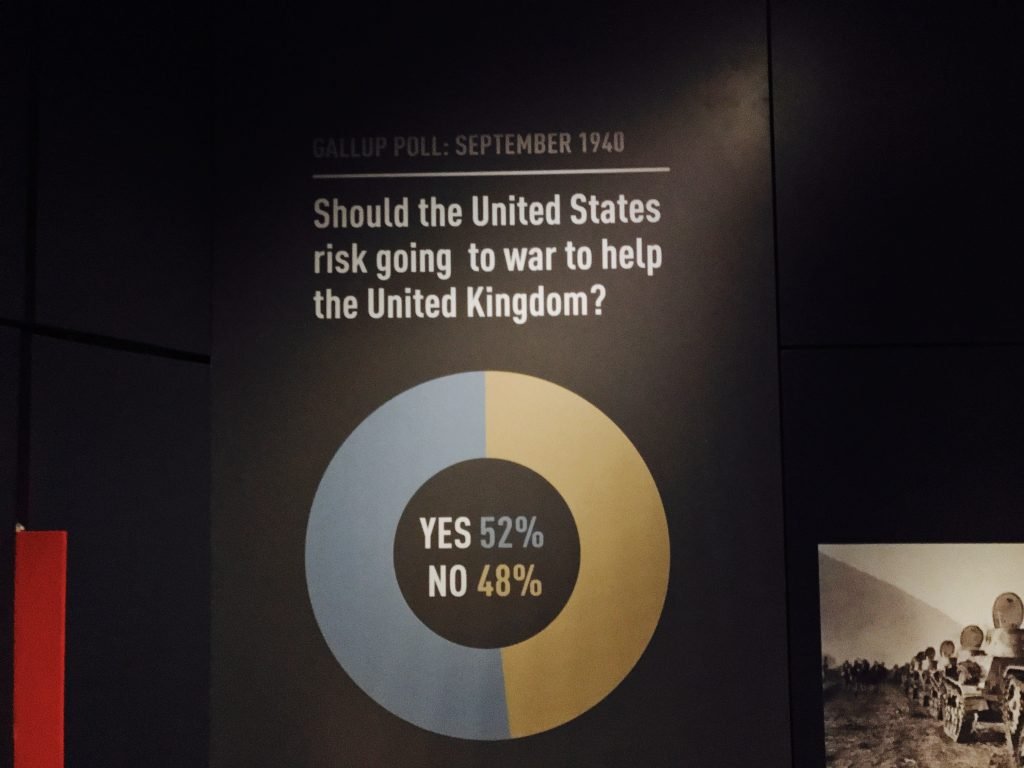 The 32,512 square ft gallery plunges visitors in to the depths of life on the road to victory. We were in awe at the dedication which has gone in to recreating the environments in which our allies fought and died to save our futures. The Road to Berlin and The Road to Tokyo are two separate immersive experiences both housed in the Pacific Theatre galleries within the Campaigns of Courage Pavillion. Not a penny has been spared in displaying a glimpse into the WWII hellish locations. 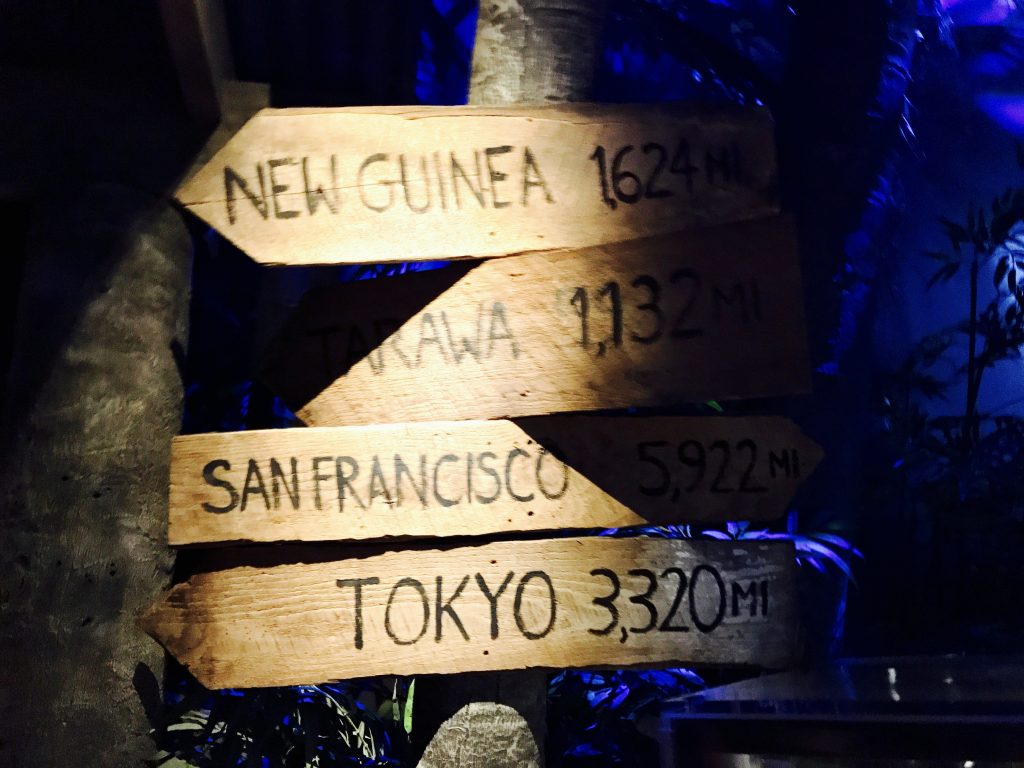 The Road to Tokyo was extremely interesting to us we aren’t as educated about Americas entry in to the war like we are with Britain. The exhibit is designed remarkably well, with the gruelling conditions of war in mind. This truly was a perfect dedication to those who fought on the road from Pearl Harbour to Tokyo Bay through various islands in the Pacific. Victory was eventually taken against Japan however the human sacrifice was devastating and fought in such extreme conditions. 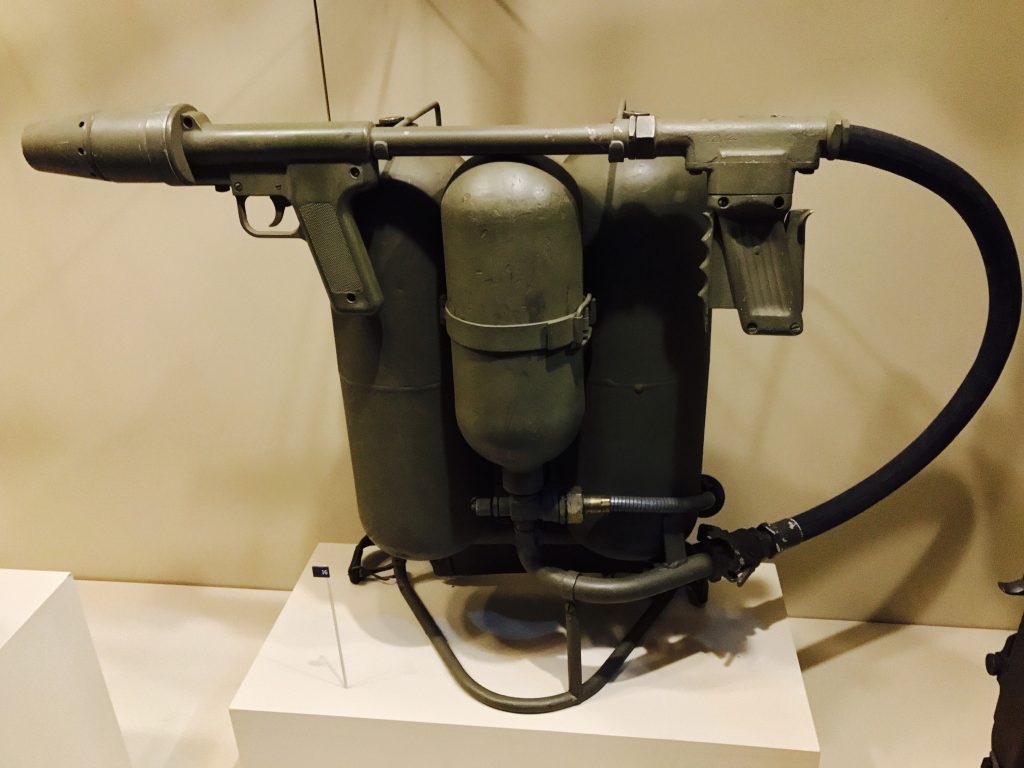 Following on from our wander through the Pacific Theatre Galleries, we took to the Victory Solomon Theatre. Alongside the theatre, there is an extensive gift shop with a range of creative gifts for your loved ones. There is also a restaurant which we never had time to visit due to an already packed tummy. Coming from down the hall was some pretty catchy music and because curiosity is my middle name, I had to have a nosy. The music was coming from BB’s Stage Door Canteen. I begun to feel myself falling back in time as I watched couples dancing a jitterbug. Heaven! 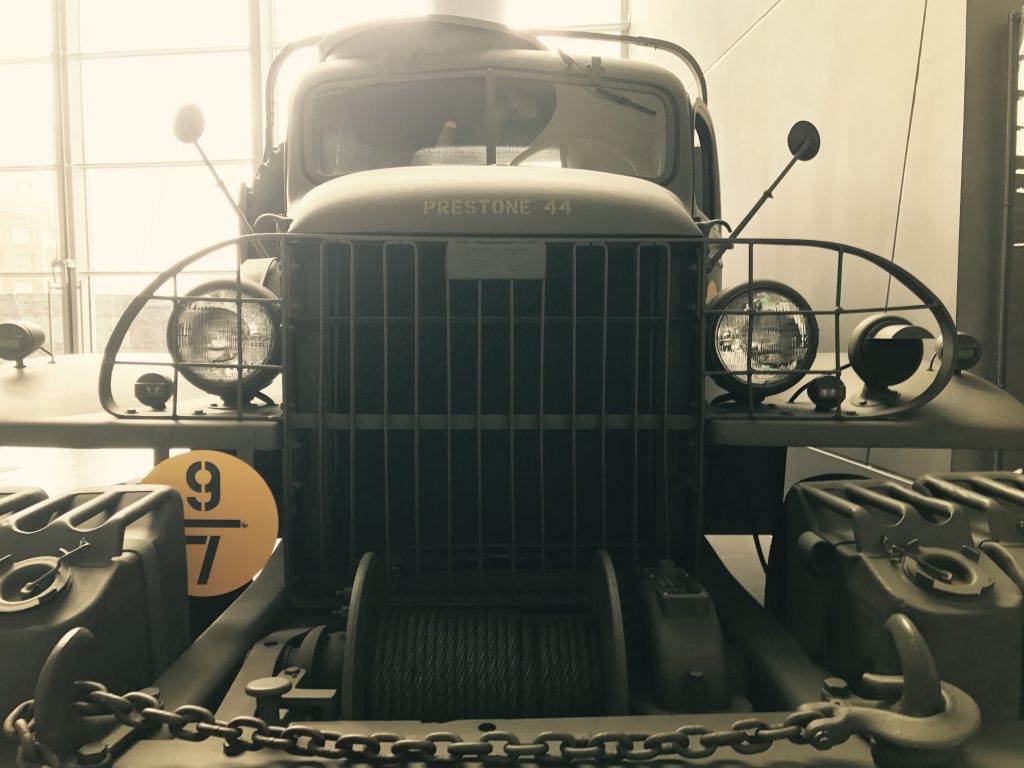 We had picked up tickets to the museums theatre so we could catch ‘Beyond all Boundaries.’ Little did I know that I would leave with mascara on my chin. The 4D movie is narrated by the one and only Tom Hanks! It is an hour long production which perfectly depicts Americas involvement in World War 2. Personal experiences and stories were shared in an emotional, heart-touching way and there wasn’t a dry eye in the house. Having watched Band of Brothers and The Pacific, this was so far up my alley. 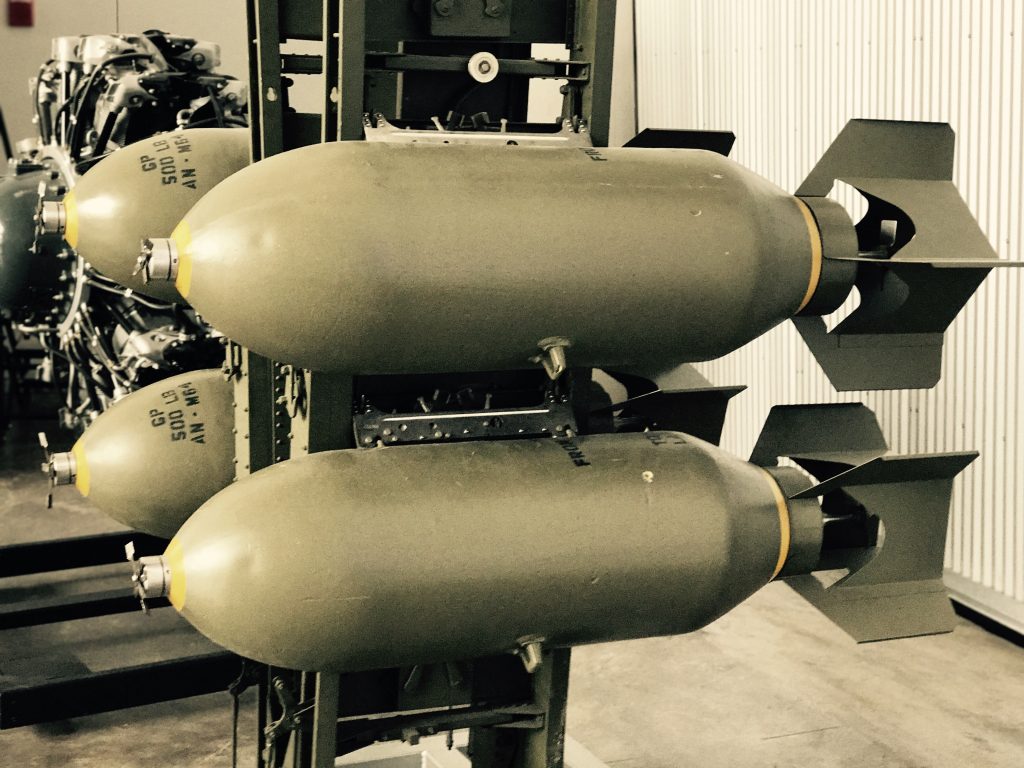 Scott was intrigued by the 4D effects of planes, tanks and even concentration camps. From the beginning to the end, I swallowed a grand total of 42 lumps in my throat. Until the very end, where I burst out of the theatre in bits. Scott reminded me that I wasn’t an American but in that minute, I felt incredibly American. In truth, anyone watching would have felt their heart strings being pulled. The WW2 museum was worth visiting purely to watch this amazing film! 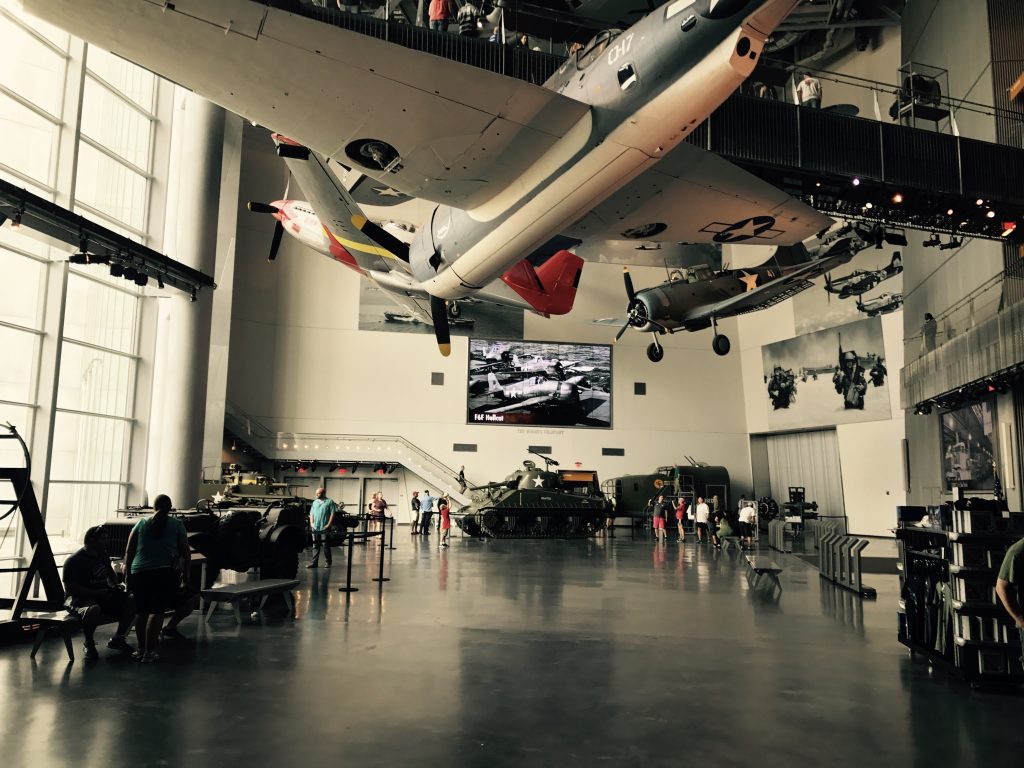 Finally, Scott was in his element because boys love their toys. In this pavilion, there were a variety of ‘Warbirds.’ I am not going to pretend to be an expert on aircraft however even I was amazed at the size and story attached to each of these planes. Scott asked me numerous times how the planes got there, like I would know?! He was convinced that they were boated down the Mississippi River to the site where the pavilion was built round them. Not true, we found out from the staff that the parts were taken in individually and put back together within the pavilion. We took an elevator up to the highest floor, where we walked across a bridge, allowing us to look down on the planes from above. If you listen closely, you might still hear my knees knocking together. 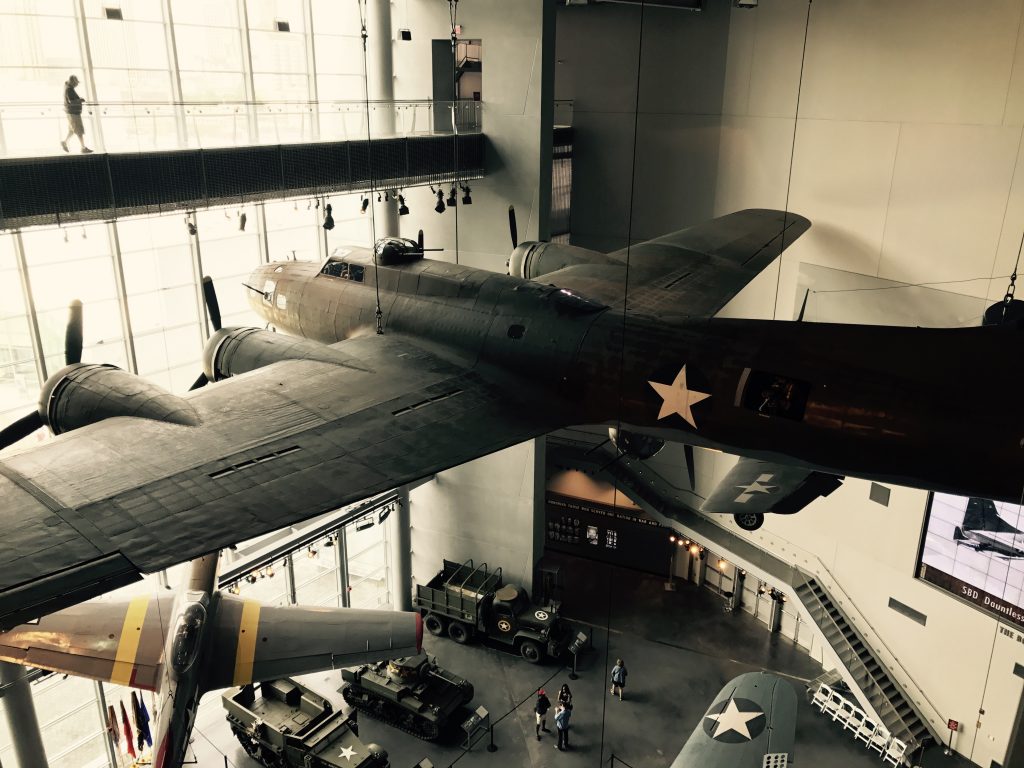 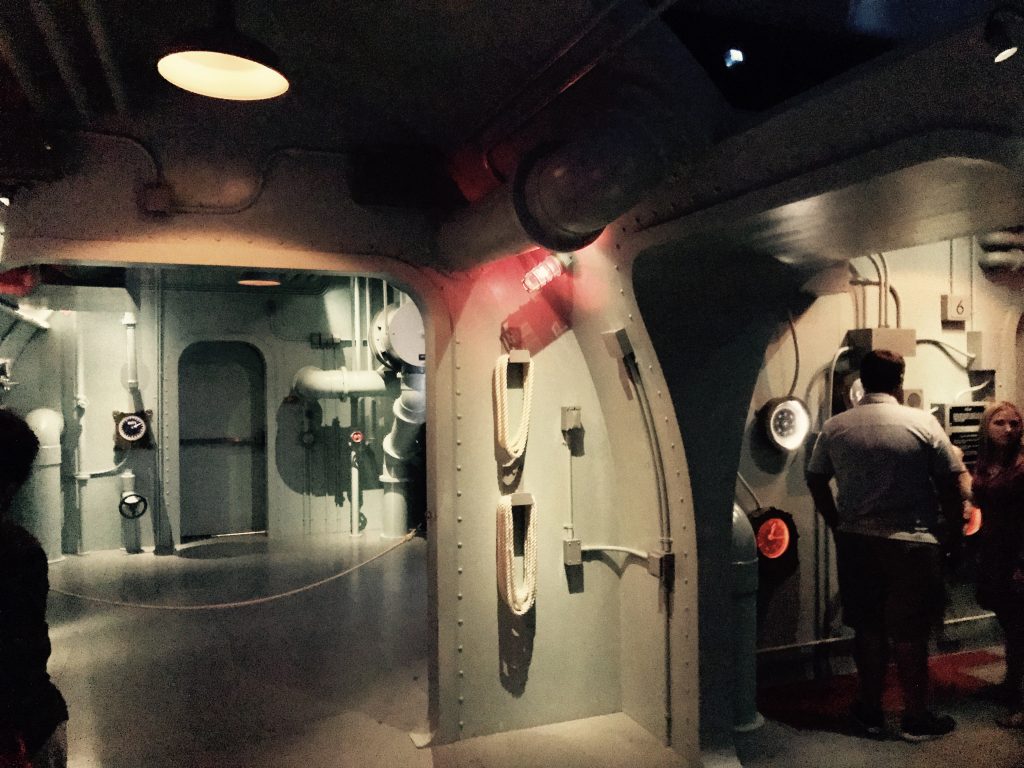 The USS Tang Submarine was the most successful submarine in World War II. We were handed a watch bill with the name of a crew member before taking to our station in the submarine. Within minutes the doors were shut and projectors and special effects took over. The make shift submarine allowed those ‘on board’ to experience and appreciate the final mission of the USS Tang. At the very end of the experience, we checked to see if the crew member on our card had lived. Unfortunately he was one of the unlucky ones, but a true war hero. 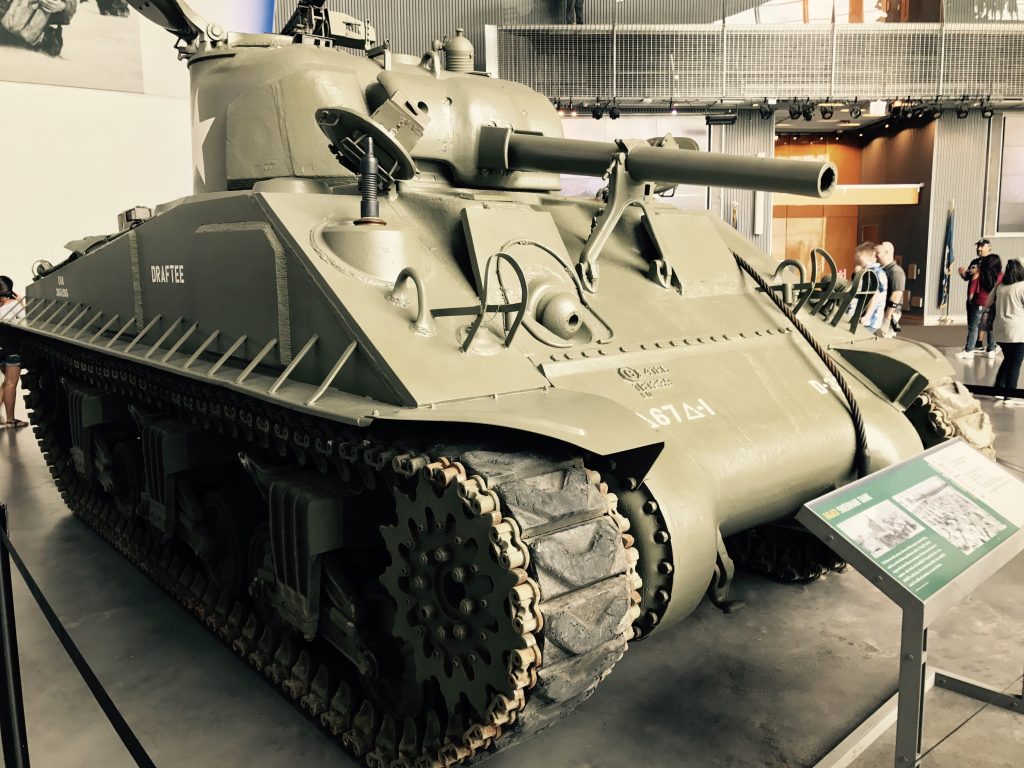 Should you be interested in visiting the museum, we would highly advise you take a full day to do so. Try and arrive there as soon as the museum opens and plan your day out in advance. This will save you a lot of map work when you arrive. We have included the link below where you can explore the museum in more depth and plan your visit.

During our media trip to New Orleans, we were provided with VIP passes by the New Orleans Convention and Visitor Bureau (CVB). This provided us with complimentary access to the wealth of exhibits within the National WW2 Museum. We would like to extend a huge thank you to the CVB and also to the World War II Museum staff for being consistently friendly, courteous and professional. As always, all opinions belong to me.