We took the new Caledonian Sleeper train from Aberdeen to London for a week of Victoria living her every London fantasy. She basically placed herself in every Georgian London novel she had ever read, picturing herself flouncing around in swishy skirts as she sauntered through Kensington Gardens, speaking to the squirrels like they were her long-forgotten cousins. Bless her. We became completely typical Christmas tourists. Victoria hunted out every Christmas tree within an 18-mile radius of Buckingham Palace. Then she posed beside them all, before deciding I was but a useless photographer and deciding to post none of them. Which is basically becoming my everyday norm. 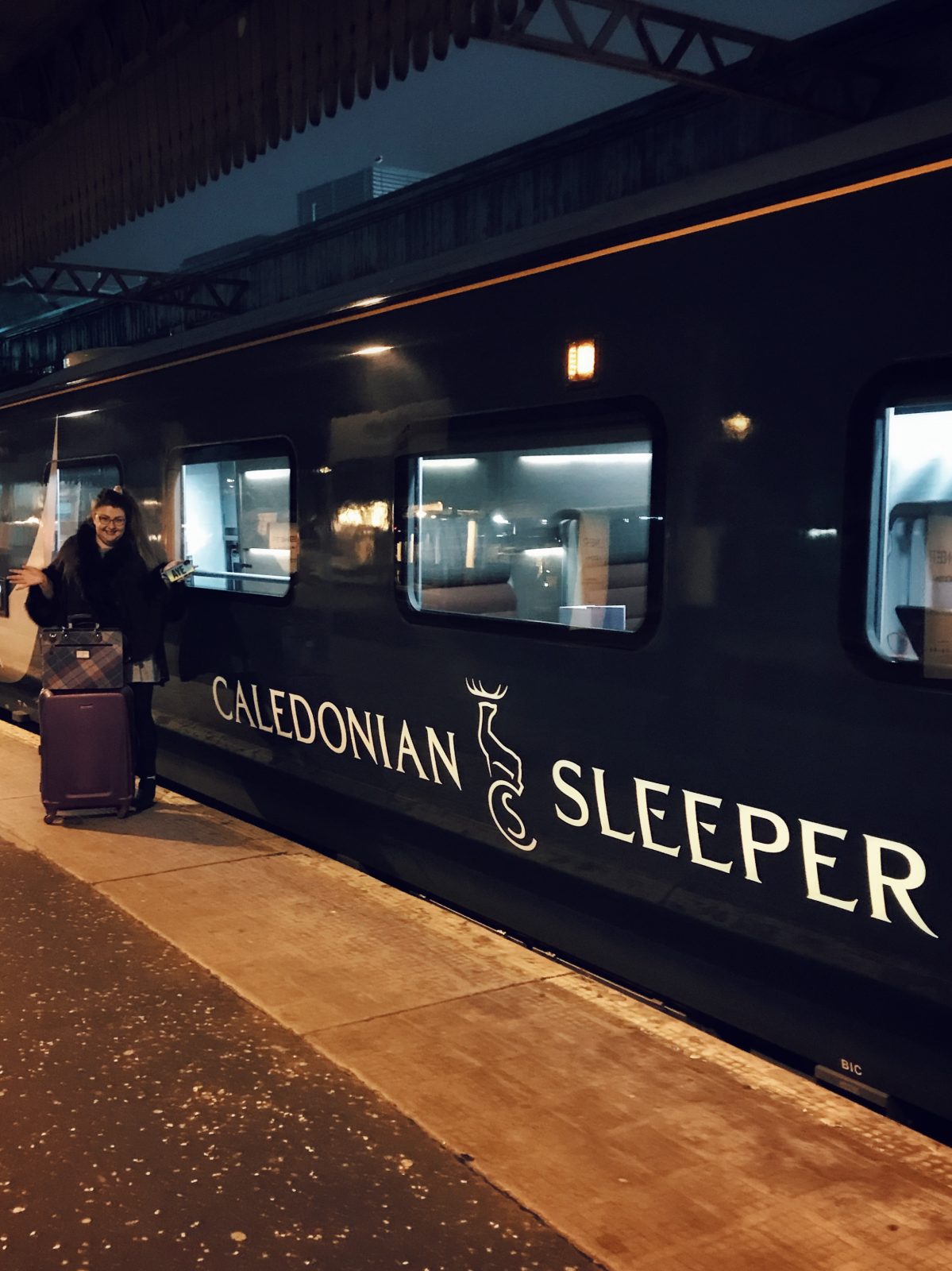 The last time we took the Caledonian Sleeper, it was on a very last-minute trip to Blackpool which seen us hop off the train at 4am in Preston. This time we were doing things proper. We were getting the new Caledonian Sleeper train from Aberdeen, all the way to London, with zero 4am Preston-dramatics. The train left Aberdeen at 9.43pm, arriving in London at 7.49am. A full 10 hours on-board! Victoria was ready to rock in pyjamas, fluffy socks and a face mask. This is bedtime but on a whole other level. We had two experiences on the new Caledonian Sleeper train. One in the Club Twin Room and the other in the Caledonian Double. 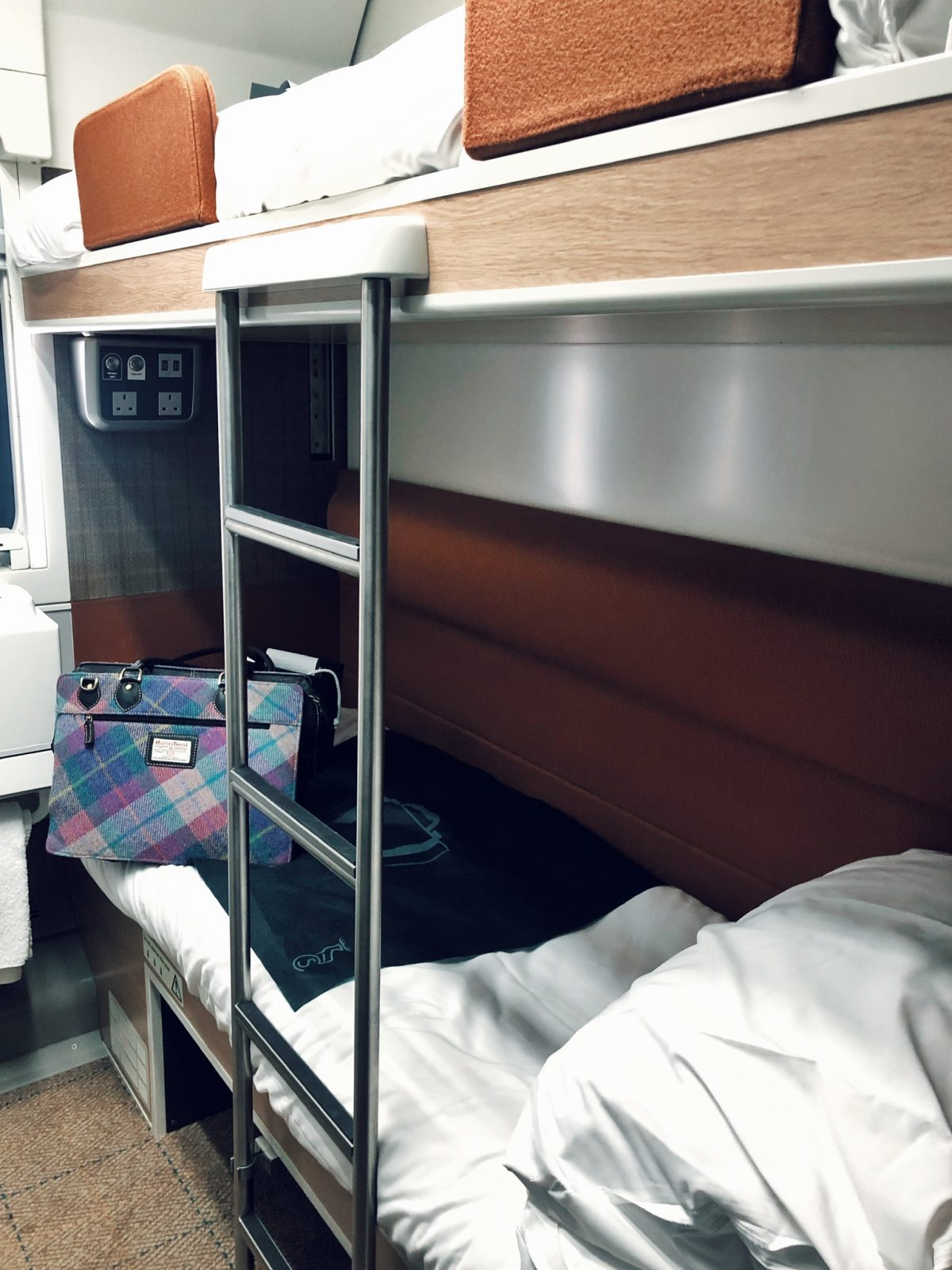 Let’s state the obvious here for a second. A bed on a train is a complete luxury, there’s no denying that. It’s fantastic getting to stretch out and doze off on a 10-hour journey.

The club twin room has been designed with great intentions. Unfortunately, the size of the cabin somewhat inhibits the space needed for all of the bells and whistles. Perhaps if you were travelling solo and had a single bed as opposed to a bunk, the room would seem much bigger. But with bunk-beds, it was a bit of a squeeze. The ladder to the bunk bed is quite tricky to get up and down and you’re going need to keep your shoes on unless you want the metal railings to sting. Popping a wee cushioned wrap on these would make all the difference.

Once I was up there, that was me for the night – Victoria was left to sort out the suitcase and pass me stuff. It’s nigh on impossible for two adults to stand in this cabin unless one stands in the en suite. 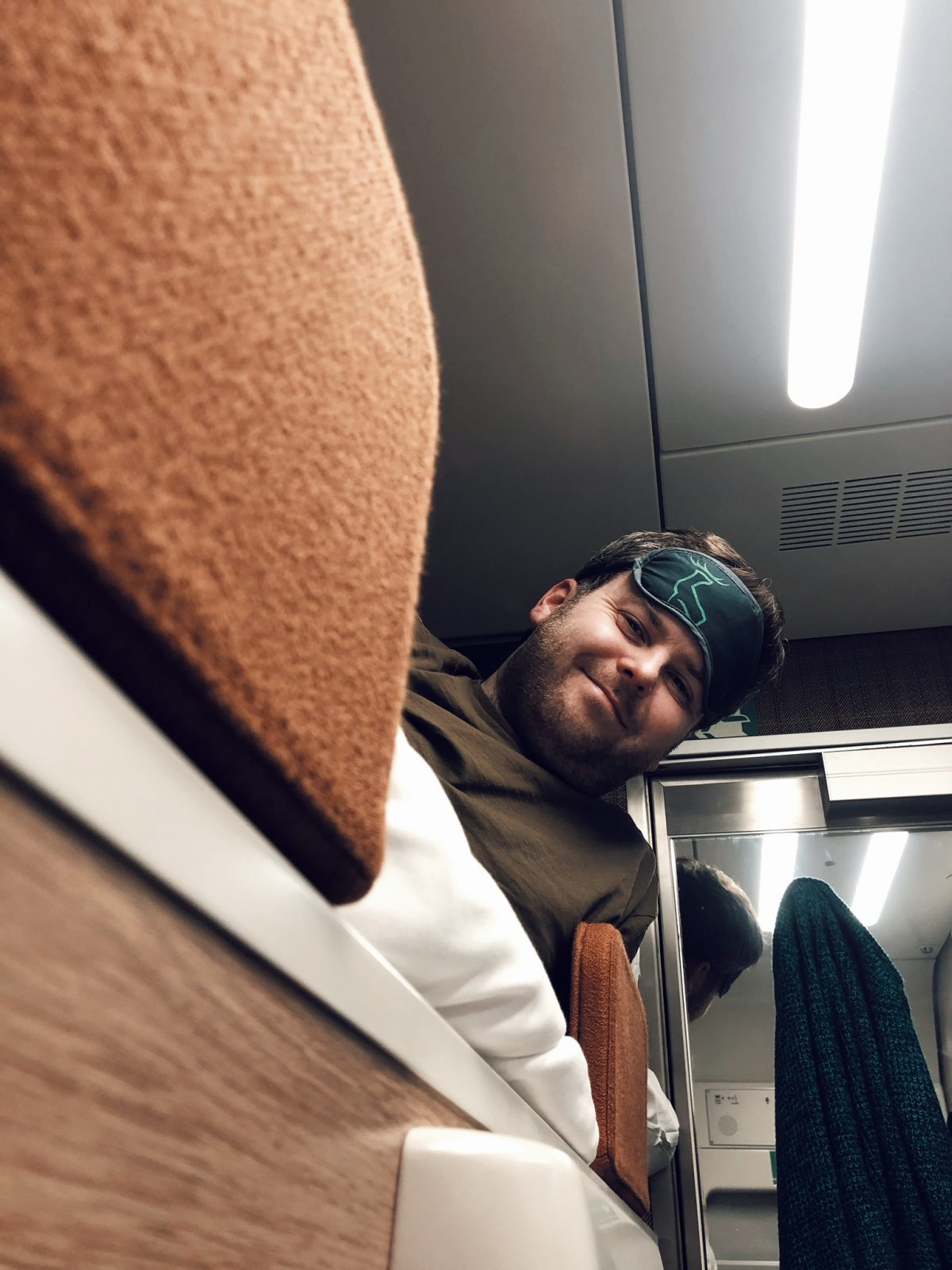 The Glencraft mattresses were comfy, there were two pillows and the sheets were pristine, so for a bed on a train, it was definitely comfortable.

The bed had decent space underneath it for luggage, but the ladder for the bunk comes all the way to the floor right in the centre of the bed, so we couldn’t fit our suitcase in the gap. Our case had to sit upright all night blocking my way down the ladder and my access to the sink. The ladder also made opening the case far from ideal. 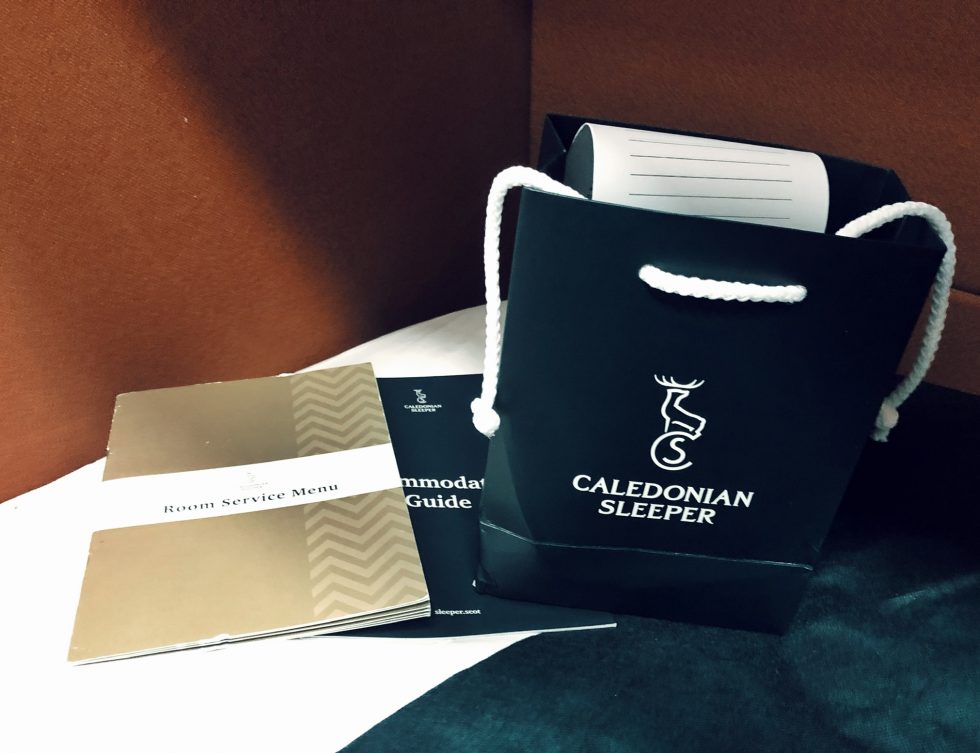 We slept considerably well, for being on a train, although there is a little light above your head that you can’t turn off which reflects off the roof and illuminates the top bunk. Fortunately, you are provided with an eye mask. 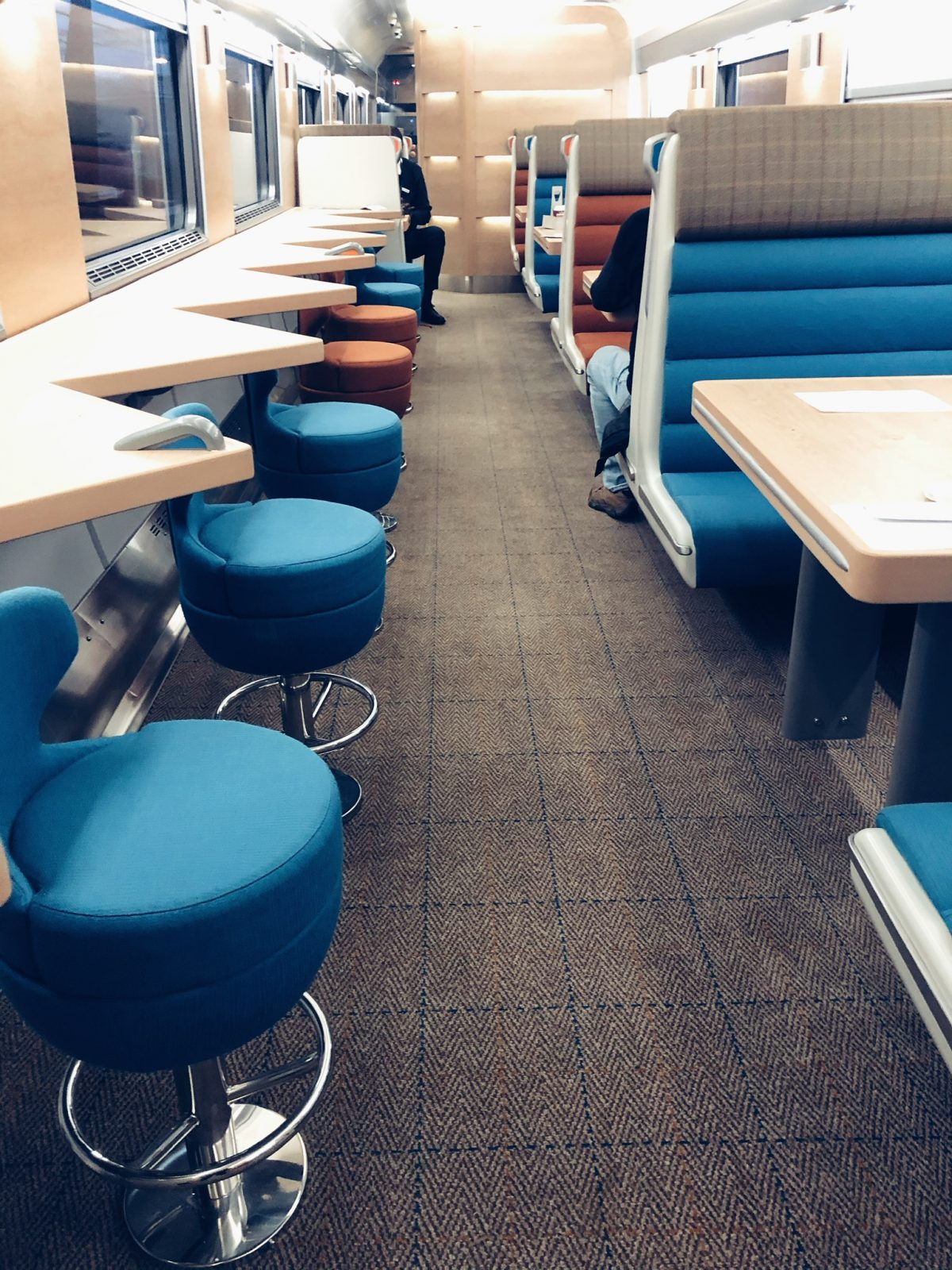 The beating heart of the Caledonian Sleeper is the Club Car, which serves Scottish food and drink. The Sleeper prides itself on serving local produce, which we admire, however they did spell a local Aberdeenshire whisky on the menu wrong. Glen Garioch happens to be one of my favourite whiskies as that is the village I grew up in so that definitely left a sting. There are, however, aptly-named Mac & Wild Scottish-themed cocktails available, such as the “Ginger Laddie” and the “Bonnie Brae.” 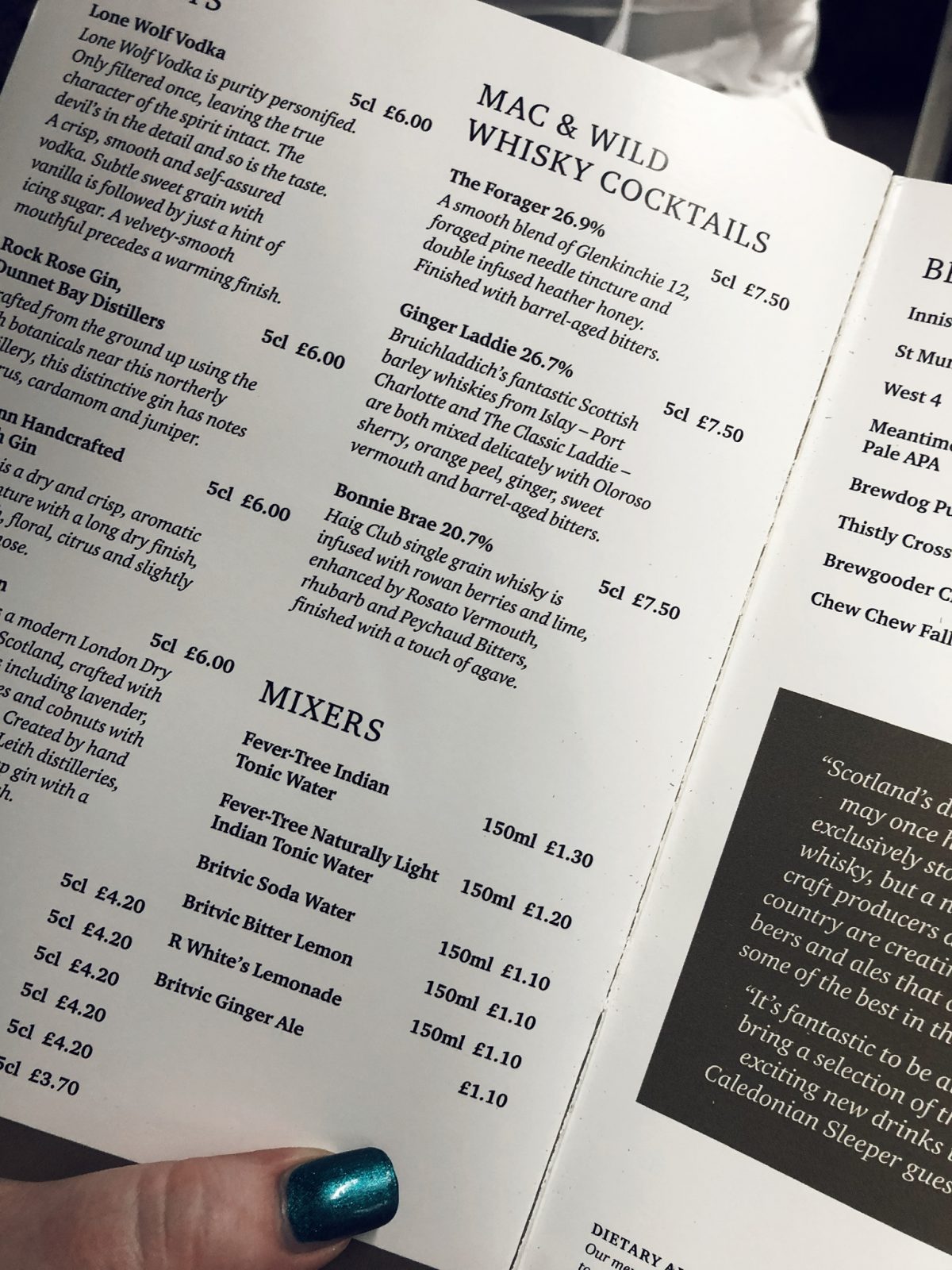 London to Aberdeen in The Caledonian Double Room 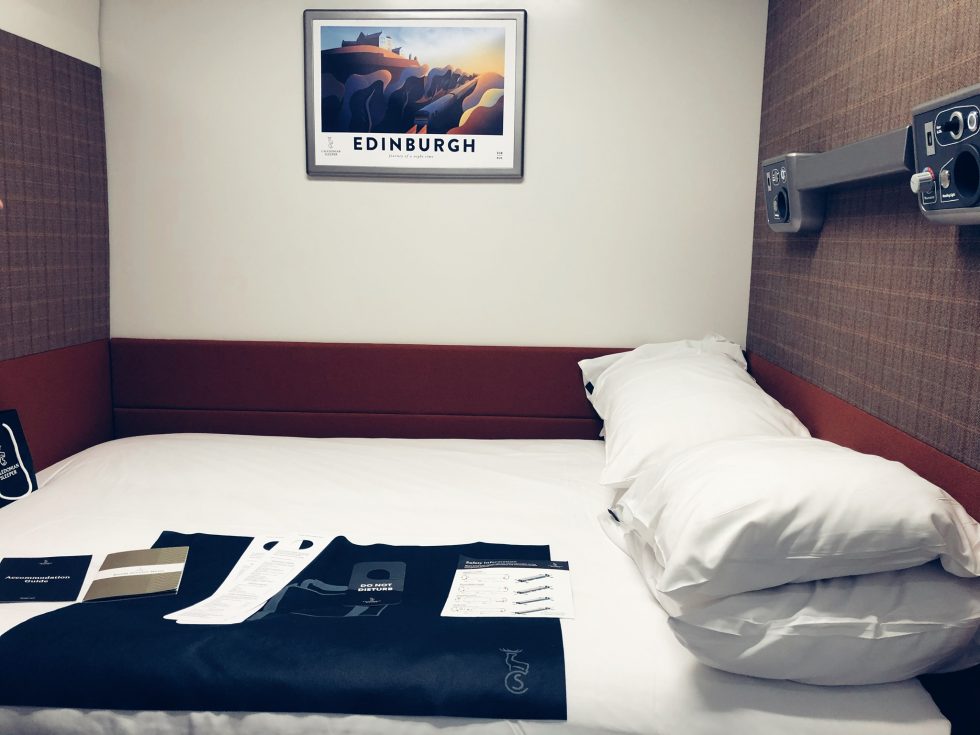 The cabin itself was fantastic; the bed was comfy, there was plenty of space and the layout was perfect. The Caledonian Double Room is a complete contrast to the club twin! This was more like the luxurious experience one would expect on the Sleeper. In fact, if this is how I could travel all the time, I would. It was way more like the hotel experience advertised and really quite a pleasant journey. 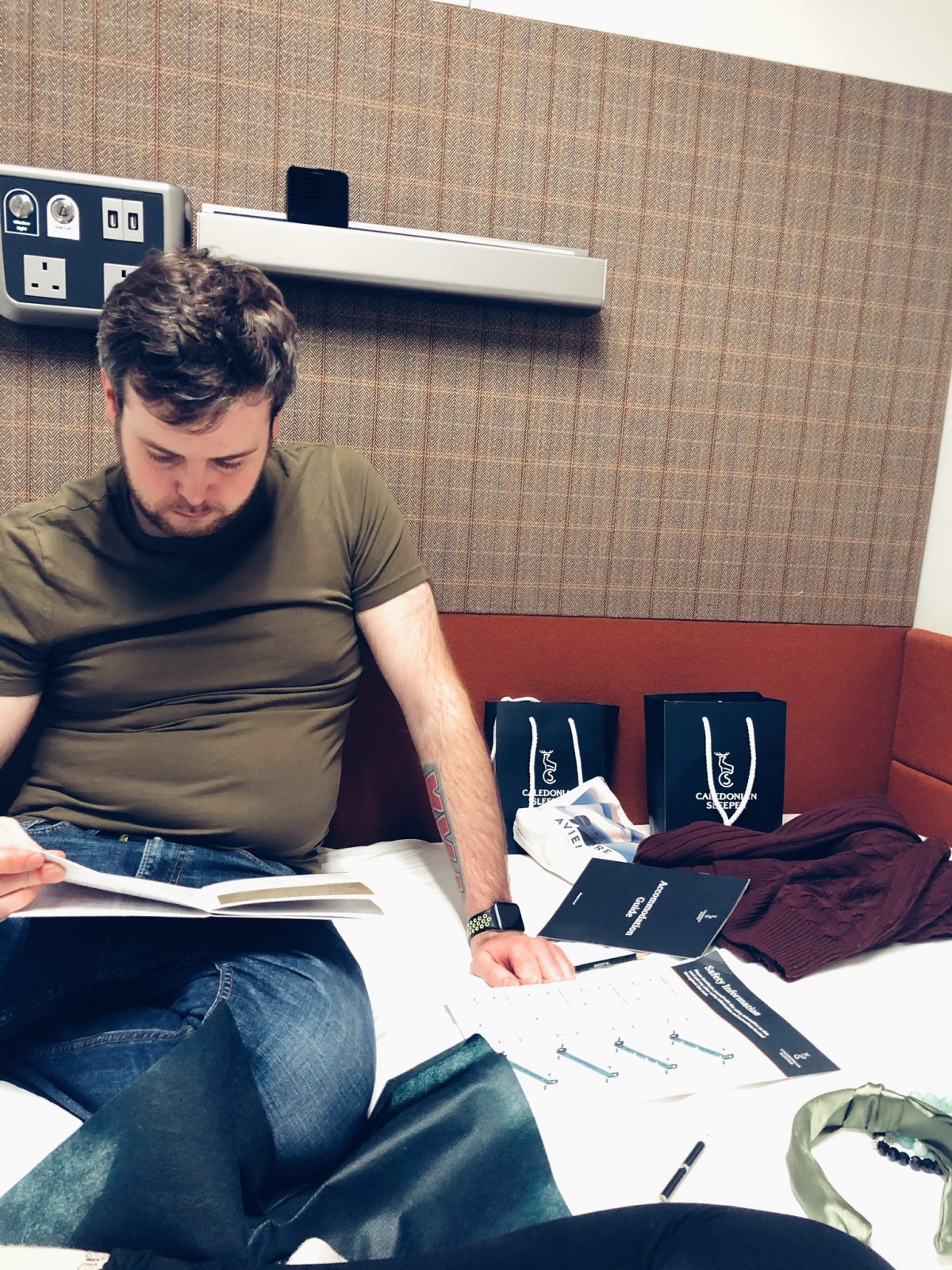 Because everything wasn’t so crammed together, the layout of the room was much better. The plugs had better storage and the loose hanging cables weren’t a problem this time. Even the night light was positioned differently and shone away from your face.

The alarm to call staff for room service was broken, which was a nuisance, but not an overly big deal. But then as we finally caught a member of staff (as I hung out of my room in my pyjamas), she said that this was a “deep concern” and “really dangerous” and I slightly giggled to myself. Even with my amateur dramatics, the lack of gin due to broken room service has never been a “deep concern.” The member staff then said this was “the only way we could contact them in an emergency.” This never even crossed my mind. She came back to say she couldn’t move us as the rooms were full. We didn’t ask, nor were we expecting to be moved but this issue was obviously worrying enough that they would look into moving us for it.

After missing our breakfast by 5 minutes on the journey down to London, we ordered breakfast to our room on the way back. We both had refreshingly sweet smoothie bowls, both of which came with a muffin from Bad Girl Bakery.

The last time we travelled on the Sleeper train, the rooms didn’t have toilets. So you’d need to go wandering the halls in your jammies for a piddle. Adding en-suites has been a game-changer. Both rooms we stayed in had an en-suite with the shower and toilet combined. There is a flip lid over the toilet to hide it when standing (or sitting) to take a shower. We tested it out in the double room as we had more space to shimmy. 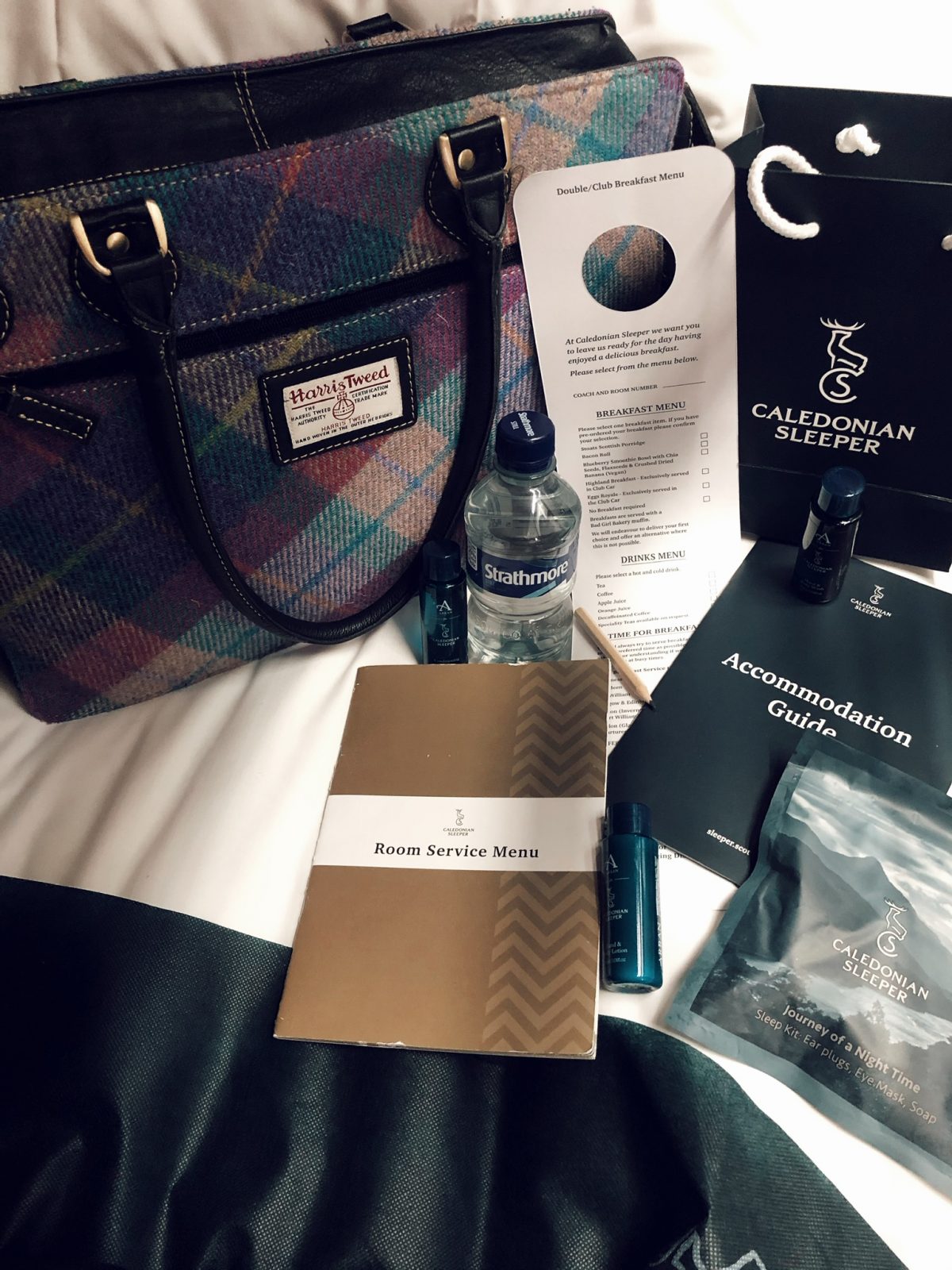 Each guest receives a bag of goodies in their cabin. It contains toiletries and a lavender pillow spray from Arran Sense of Scotland, an eye mask, earplugs and a bottle of water.

We left the cosy lounge at The Phoenix Hotel, headed for Euston Station in our Uber only to find out that nearly all trains heading North had been cancelled. The Sleeper needs to ask the West Coast Mainline in advance if they can use their tracks, and because this was a last-minute issue, the train was completely cancelled. When there are unforeseen problems with the trains, lines or weather, the option is either cancel your journey and ask for a refund or travel to your destination (or as near to it as possible) on an overnight bus.

After a long day of working and walking around London, and an early start the next day, this is the last thing we needed. We booked a hotel for the night, adding an extra night and day in London, and travelled back up to Aberdeen the next night, in the Caledonian Double room.

Overall, the new Caledonian Sleeper trains are a vast improvement on the last ones. They have been completely re-decorated and the rooms have more to offer. The Caledonian Double is a completely different experience from the Club Twin room. The twin room beds are comfy, but the cabin is cramped. A club single would probably have a similar effect to the double with more space. Whichever way you choose to book, make sure you give yourself a day on either side if possible (in case of cancellations) and book a cabin which gives you plenty of room. Bon Voyage!