One way ticket to the moon 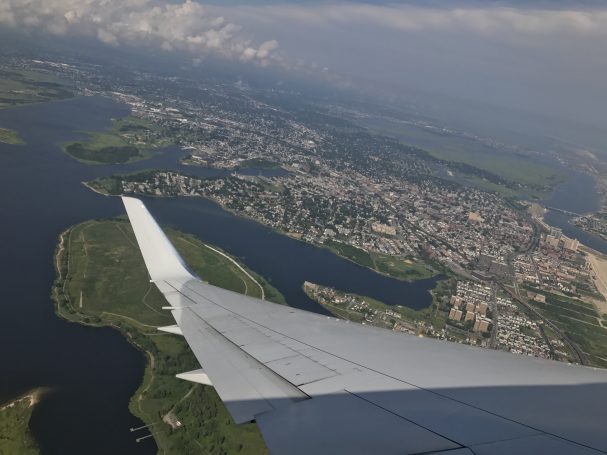 I have been in some states, but never have I been in 3 states in one day. By the time we reached Louisiana mama, American Airlines had affected my Scottish hairline and the instant humidity left me resembling a young, sweaty Bonnie Tyler and honey, it’s a heartache. Landing in Louis Armstrong Airport in New Orleans at 4am UK time left me feeling like a broken down horse with a resting bitch face which could not be helped.

Waking up 6 hours behind y’all back in the UK left me feeling like Marty from back to the future. Except my ride was an Uber and Scott was my Doc. It wasn’t until I woke up in the morning that I could really appreciate the wonderful world. Our first hotel was the Hilton Homewood Suites in the French Quarter and they do a really good bed. Regardless of the funky pool and array of amenities available, that mattress and those sheets were packing body snuggling loving.

Being fitness conscious (HA HA), we took to the hotel pool for a brief swim which included me gravitating around like a dopey jellyfish. Scott complained about the water being too cold, which resulted in me calling him a fool seeing as it was like 200 degrees.

SPF loaded and anti chafe pants at the ready, we took our first steps out of the hotel and clean in to a preheated oven. Had you cracked an egg on my leg, I could of produced you a fry up. New Orleans in July is hotter than hell and although I could breathe, I think I lost 4 pounds in 5 minutes. Complaining about the heat was pointless when we had more important things to do. 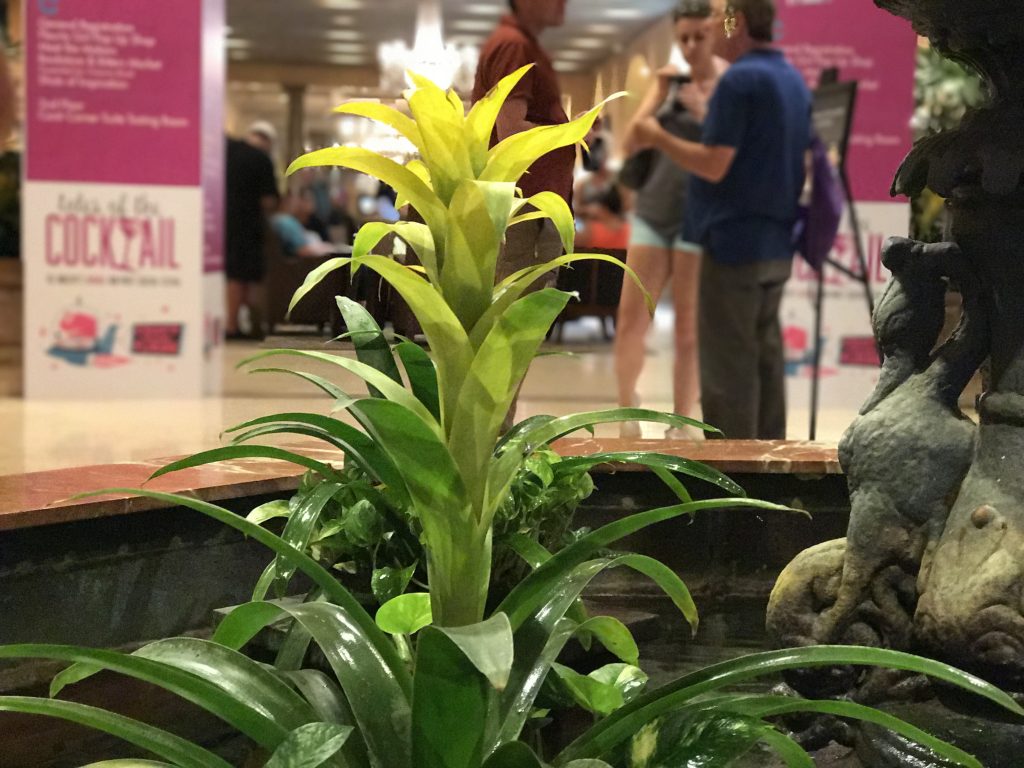 Registration for Tales of the Cocktail at the Hotel Monteleone was our number one priority for the day. Although we had been accepted for media credentials in the single most saucy email of my life, we had to go to the Royal Salon to check in.

Everything went smoother than silk with my hey-ho but typically Scotts registration was more that of clotted cream. Apparently he didn’t exist, but after a 24 hour trip from Scotland, he would bloody well be existing and fast. The hilarity behind this mix up was that he was genuinely on their system as Scott Scott from Scotland… Honestly, I kind of prefer that. 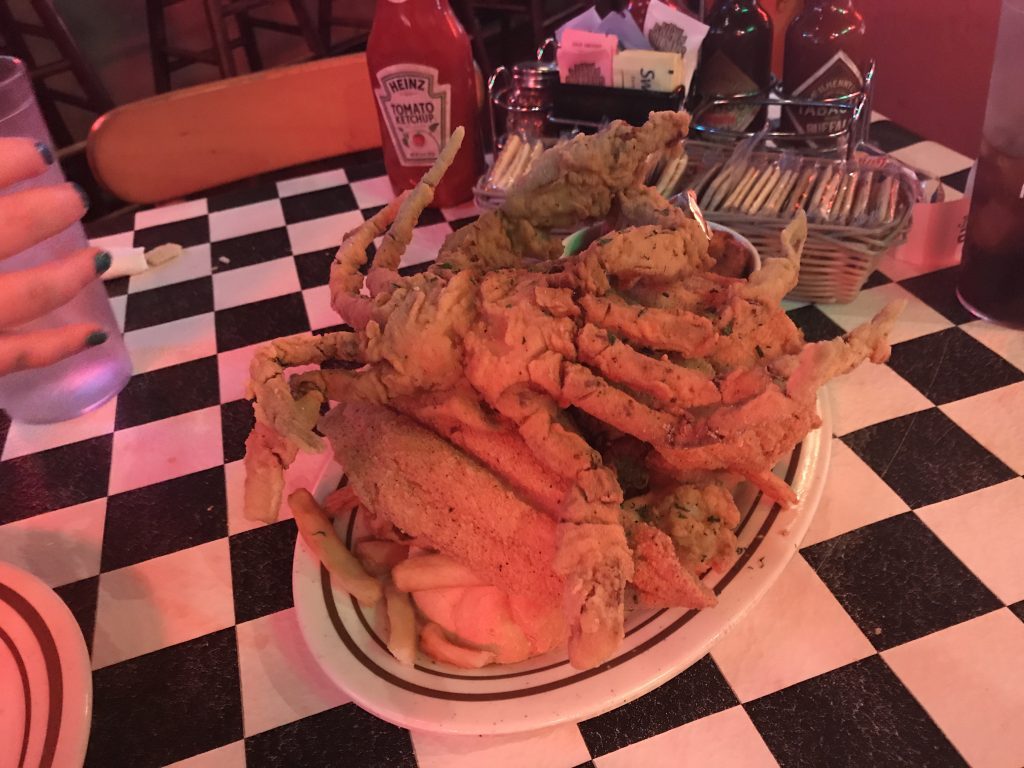 Whilst we waited for the Tales of the Cocktail festivities to commence, our Scottish appetites had far but dwindled in the 700 degree heat so we took to an infamous little oyster bar for some aphrodisiac appetisers.

Acme Oyster House is the epitome of laid back New Orleans culture and cuisine. Not only was the air con turning me on but the relaxed vibes, funky bar themes and the seafood scents were igniting my fishy fancies. In no time at all were we sitting with a platter loaded with a manner of deep fried fish and proteins healthy right?

Sometimes you just have to crab life by the balls and this little number was looking claw-some. On top of our platter was a distant cousin of Sebastian from the little mermaid clarted in batter. A whole crab, literally the whole she-bang. Nobody can ever critique the Scottish for our battered tendencies. Scott and I, being the romantic sort, halved the crab and got stuck in to the oysters and shrimp under its belly. 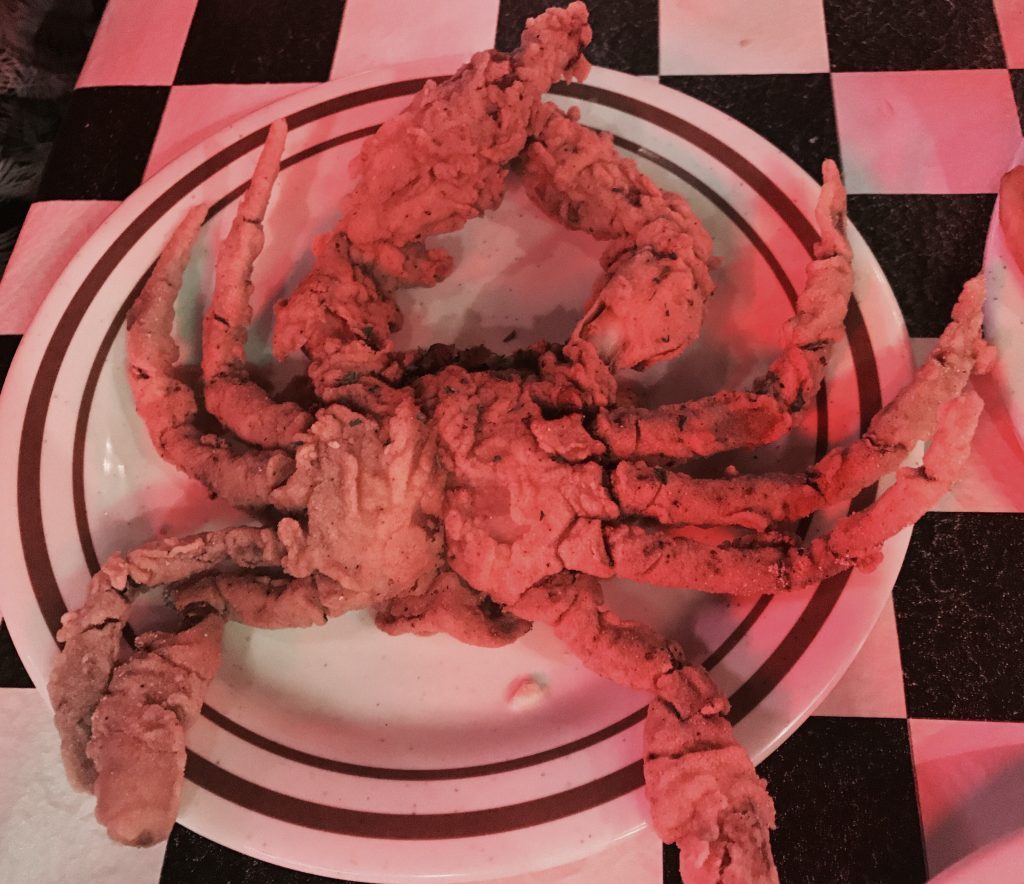 Note to the newbie… When the waitress offers you Hush Puppies, do not say yes and expect a pair of shoes. Hush Puppies in New Orleans are not shoes, they are deep fried bread and sweet corn like dough balls. You’re welcome.

Following a belly full of shrimp and feeling flirty following a run in with some oysters, we took our shimmying shoes back down to the Hotel Monteleone as things were kicking off left right and centre and I want it all. This day was far from over and nothing could prepare us for what we were about to encounter. 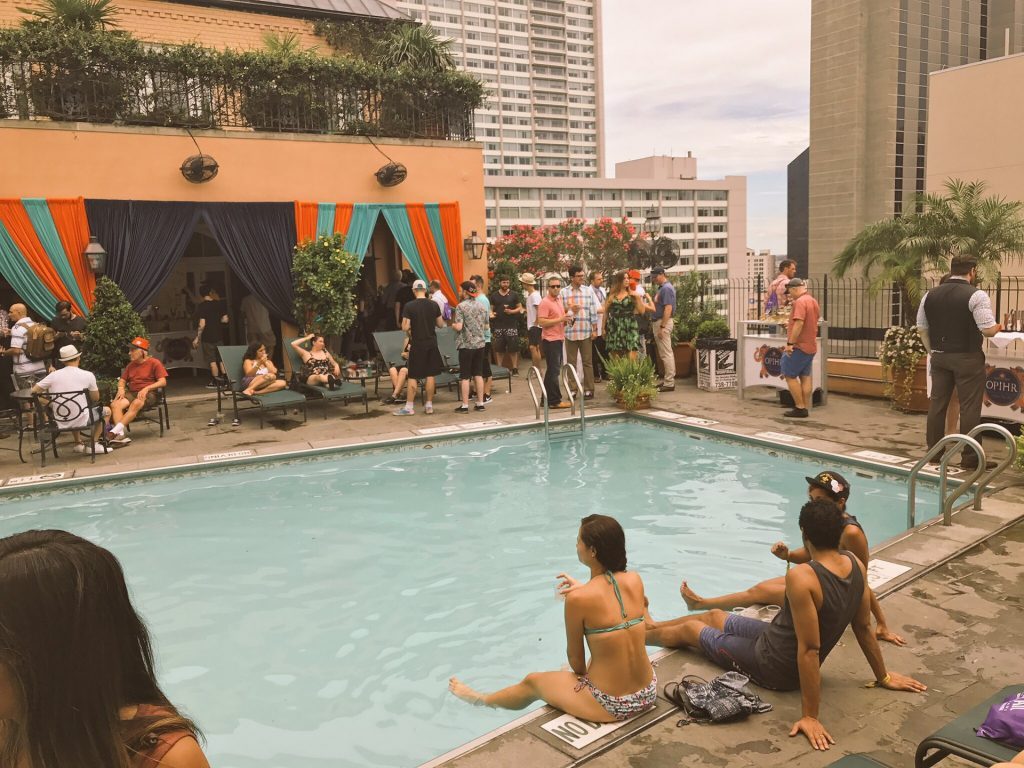 Need I say any more? We all know that Miss V likes a tipple but shockingly, Opihr Oriental Spiced Gin is a gin that I had never tasted prior to attending this show stopping event. Miss V gives the whole shebang forty thumbs up.

Amongst the various attendees having a better than good time, there was an array of professional but party friendly bartenders whipping up an array of Opihr cocktails and we were down with tasting them all. Two of my top tried and tested were the simple, Gin and ginger and the more advanced Aaron Pollock. Both of which ticked my lip loving charts. 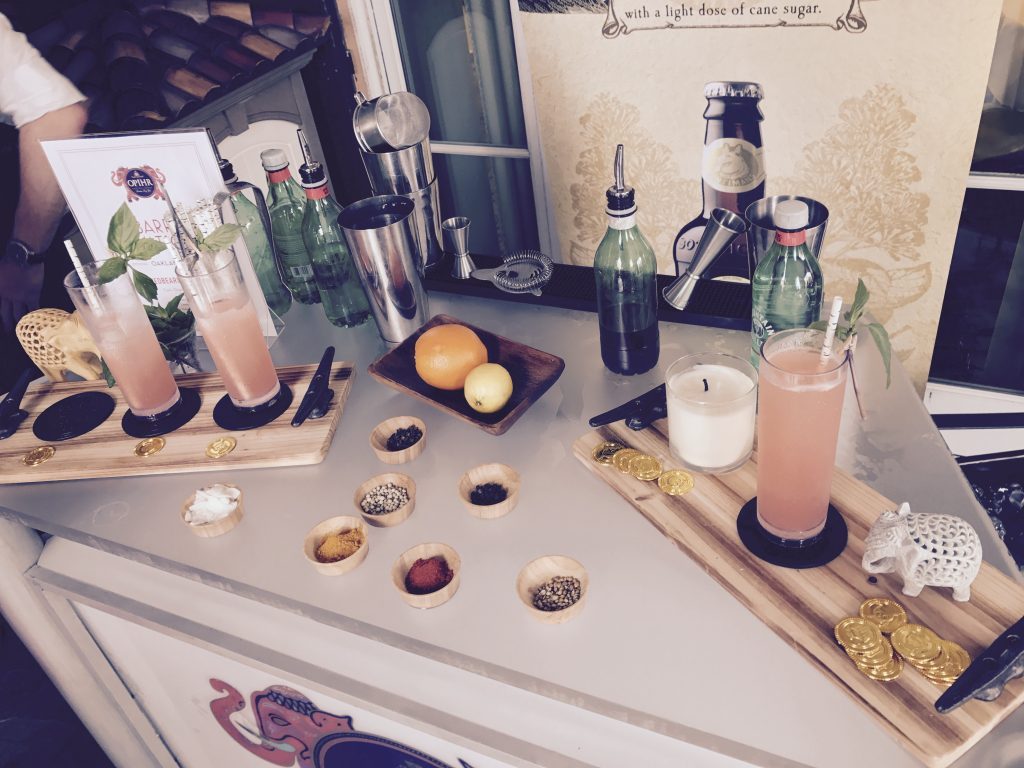 Along with an array of adventurous, spicy cocktails were some relevant and atmospheric Indian mixed tunes and various women in beautiful Indian dress serving up cocktail minis to anyone with an open hand. Fabulous event with some fabulous views! 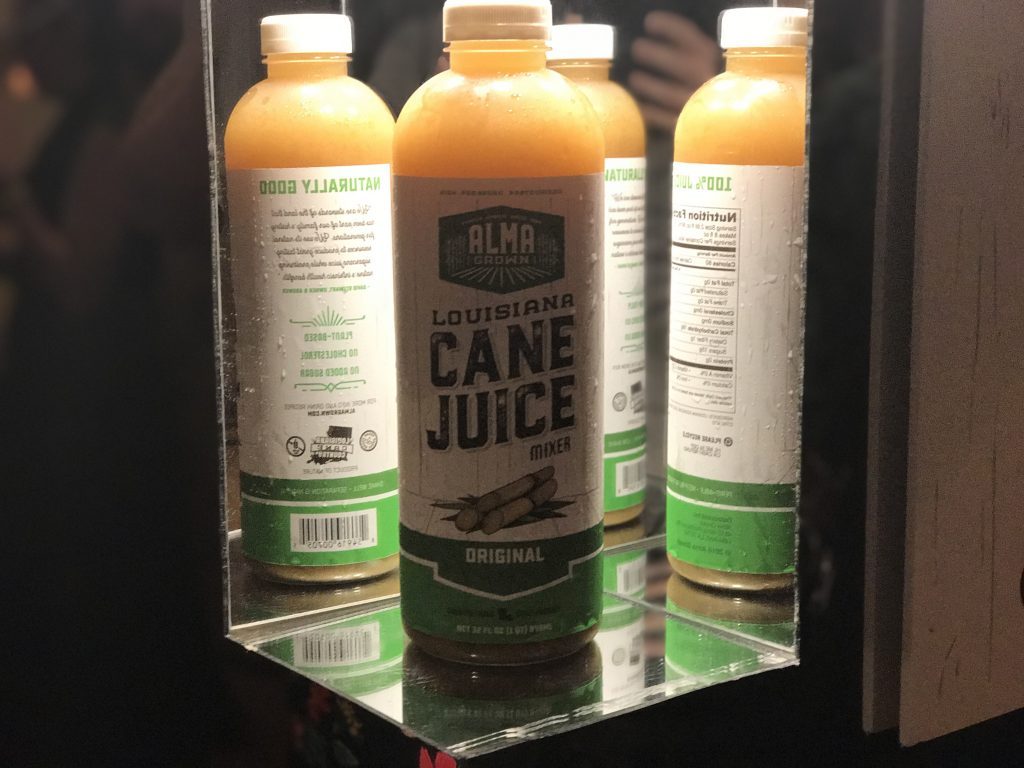 Down in the lobby, where everyone goes, was a cheeky little corner bar catching my nose. In the 950 degree heat, one requires a tasty juice and Louisiana Cane was packing a punch. I must be one of the only attendees at a world wide cocktail event that scopes out the juices and the mixers. Maybe I should become a loose juice connoisseur.

Put the lime in the coconut or alternatively, just put the lime in my mouth. Alma Grown is a family run business which uses the soil created by the Mississippi River to grow Louisiana sugar cane which is then bottled with a flavour and put out to the troops. My heart breaks a little knowing that I will not get this juice in Scotland so guys, if you are reading and want to expand in the UK – I will happily be your point of call. Lime time loving!

But darling, we have to party 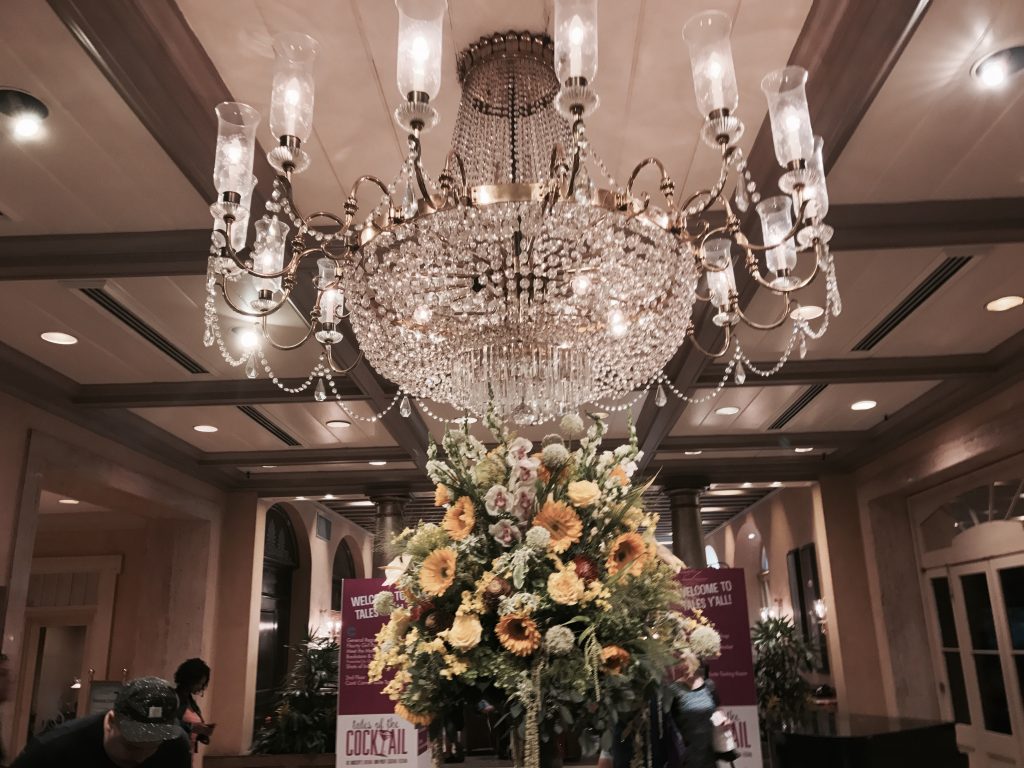 After a wander round the bitters market in the Royal Sonesta Hotel and a quick stop for a Sandemans Port Cocktail at the Grab and Geaux bar, I was getting delayed jet lag. Ain’t nobody got time for that! So after moaning at Scott forty two times, we grabbed a box of Lucky Charms and took an Uber back to the hotel.

Nobody or nothing could lift my eye lids of my chin by this point so after consumption of 2 huge baked white macadamia cookies and a cup of ‘English Black’ tea, I hit the hay for a downright disco nap before the evenings festivities and boy, was I glad I did. 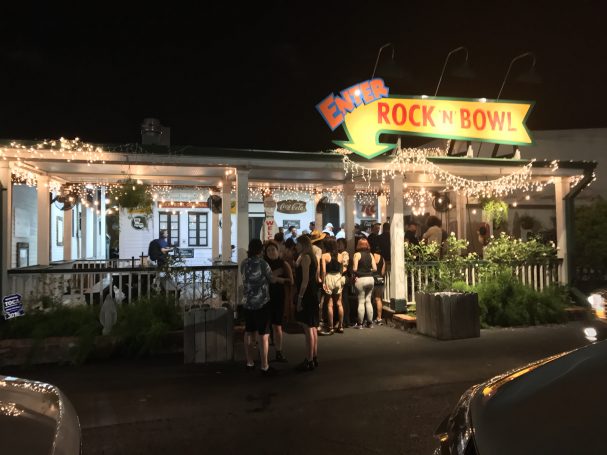 Putting on my party pants and dusting my canvas with a banana setting powder (what is life?), I was ready to rock on down to the Rock’n’Bowl for another Tales of the Cocktail event. 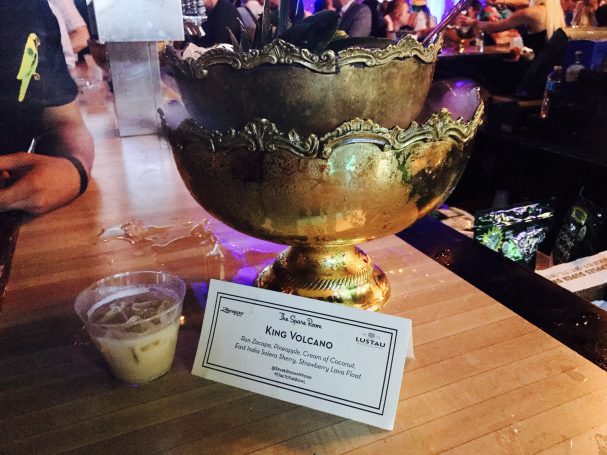 Stepping in to the unknown in New Orleans as a tourist is one thing, but doing so at a World wide cocktail event on your first international media trip is enough to send bird sized butterflies round your tum tum. Back where I come from, bowling is known as Rollerbowl and it could not have prepared me for what was about to commence. 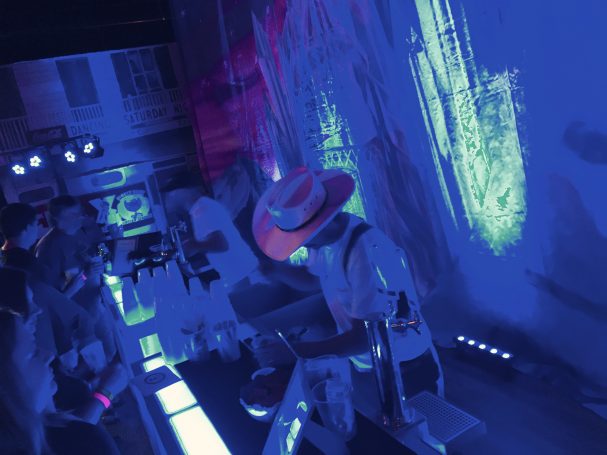 As we walked in to the massive hysteria, I didn’t know where to look. Bars, bars everywhere and each was serving up a new, exciting and mysterious liquid which made choosing impossible. What else are you going to do at a complimentary cocktail party but sample everything? Something about it being rude not to in Rome comes to mind. P.s. My cocktail flashed… naughty. 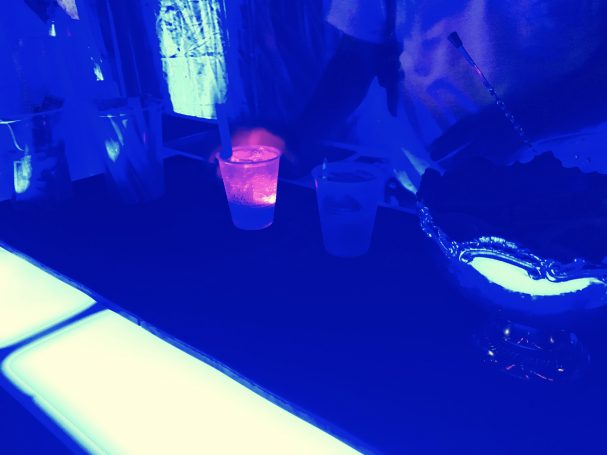 The festivities didn’t stop there. With a variety of competitive camaraderie taking part on the bowling lanes and a sexy spread of party food which again, resembled very little of anything I had ever seen before along with a big bouncy blow up dome with attendees having a ball – life was crazy. Scott and I found the nearest seating area with its own personal punch bowl where we tucked in to it’s contents and I eat probably 22 mozarella dippers, sorry not sorry.

Have you paid your taxis?

By this point, my twinkle toes were becoming twisted toes and Scotts airy attitude was becoming an aggy attitude and with another big day ahead of us – bed was calling.

Arriving back to the hotel and following a foot rub and an unnecessary bowl of Lucky Charms, we tucked down for a cuddle and a snore. Day 1 in New Orleans has blown our expectations out of the box, stay tuned! 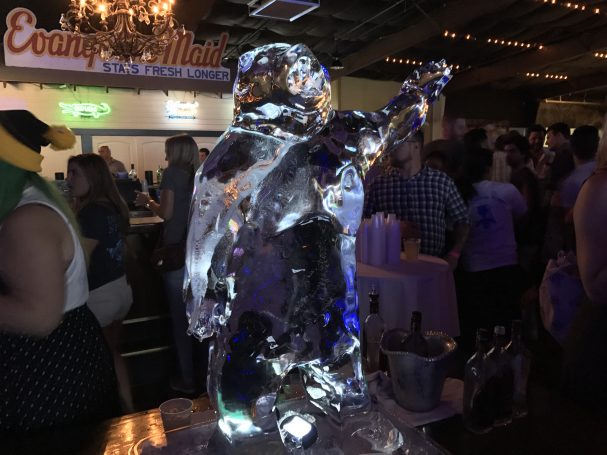 Working in conjunction with Tales of the Cocktail as media allows us the opportunity to attend tastings, seminars and invite only events in which we can report back to you with behind the scenes Juice news. We thank Tales for inviting us over to Louisiana to contribute to the media magic. As always, all opinions of mine are superb, relevant and sometimes pretty funny.