Lordy me. Just when you think you have solidified the best Summer ever, something has to knock the jam right out of your picnic. This happened to me and although I’m not happy about it, I will survive. Through gritted teeth. In the shade. While y’all lap up the rays…

It all started with a romantic, sunset walk along the North East coast between Whinnyfold and Cruden Bay. A.K.A. The Aye Life HQ and the place we go to forget about work, listen to the racket of the seabirds and play spot the seal, whilst walking our hooligan Labrador and beach-combing for glorified glass. 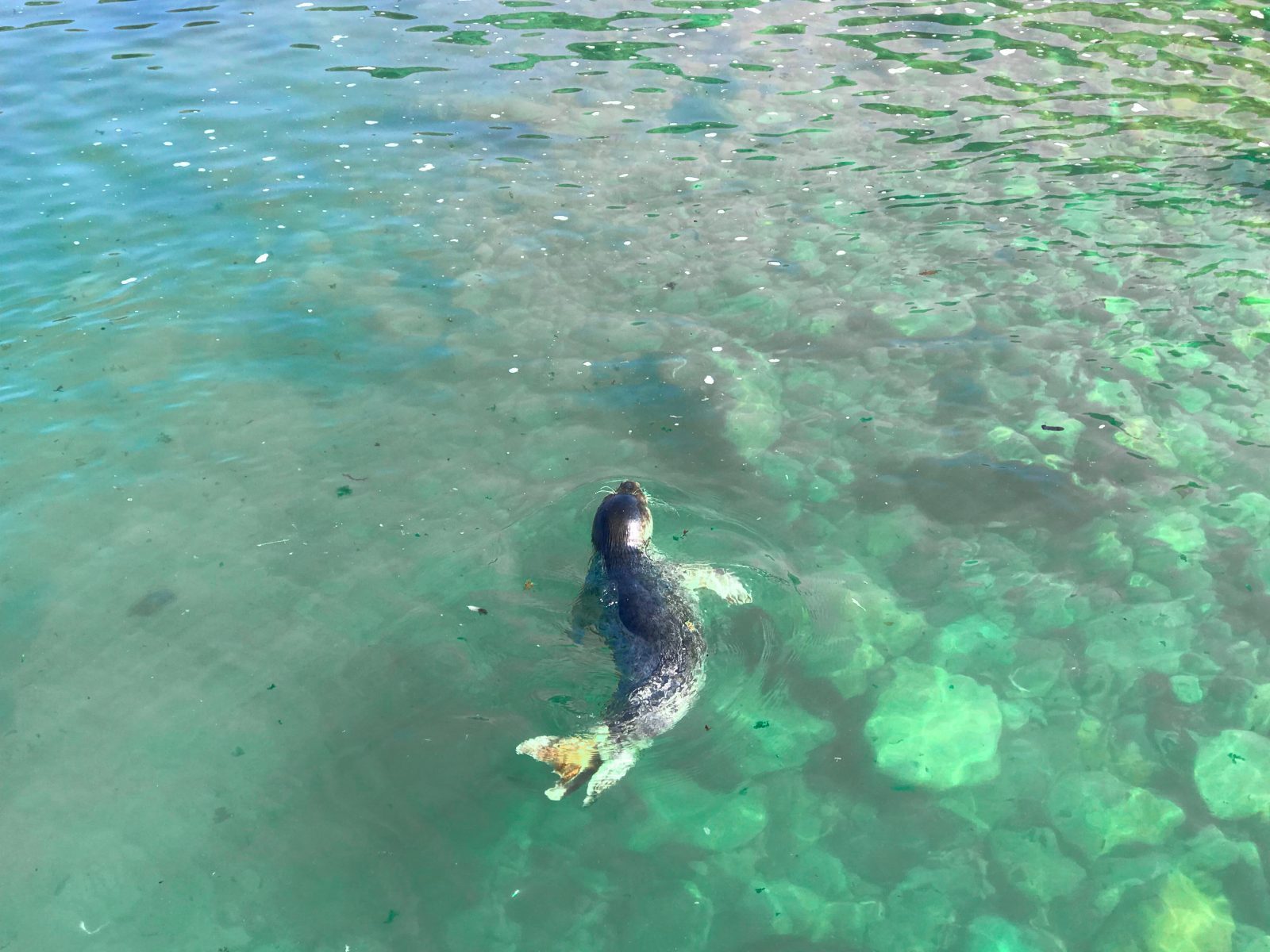 That’s the way I like my evenings, nice and eas-aaaay… and so we walked. 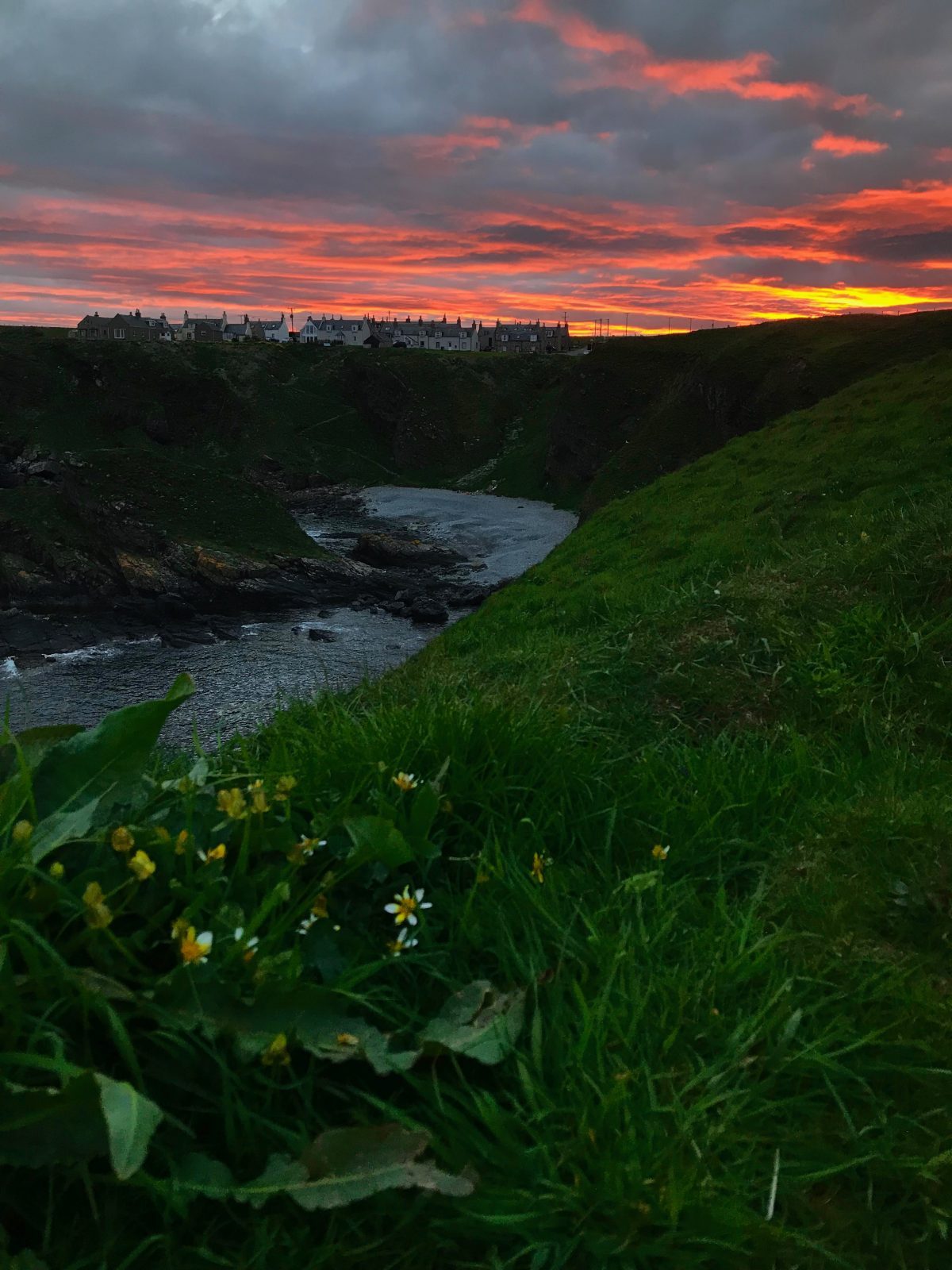 The walk between Whinnyfold and Cruden Bay beach is cliffside, along the coast and is part of the North East Coastal Trail. There are a number of epic little beaches which are highly undiscovered and absolutely loaded with cool treasure and wildlife, exactly the cup of tea that the doctor ordered. We walk here everyday (or we did before I became Long John Silver).

I’m Really Falling for You

I am clumsy. I am the type of person who will strategically place one foot in front of the other with the utmost of caution whilst scaling hilly, uneven ground but then will tumble over nothing when walking on flat, even ground. True Story (this genuinely happened like 4 days before). I actually fell around 17 times in the week leading up to this point and really should of taken this as a warning. But I never, because I am a large FUD.

To walk along this route, you need concentration, balance and a decent pair of walking shoes, along with a dog that walks beside you and not in-front of you and a boyfriend that slows the feck down the first time you tell him. On this particular day, I had none of the above. I was also wearing a gorgeous new pair of Firetrap trainers which BTW, are utter shite for walking in.

Cause I’m the Wanderer 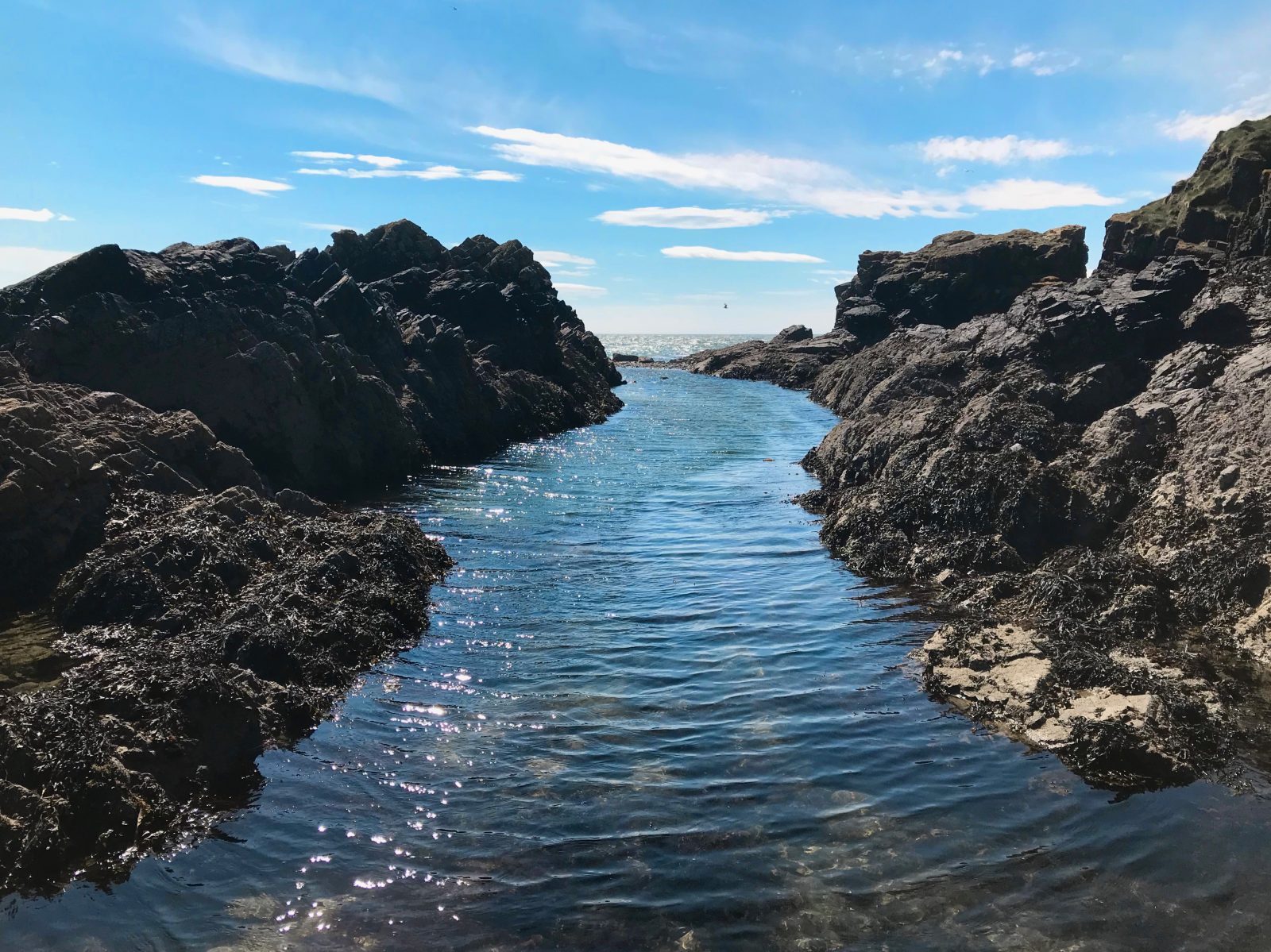 We were out for nearly 2 hours in the evenings sun, beach-combing, dog-walking and creeping around the rock pools. I could of explored for much longer but man and dog were getting hungry so it was time to head back to bedrock. Scrambling up the hills and back onto the main path was easy enough aside from a few little wobbles here and there which was nothing out of the ordinary.

There is however, a stretch of ground on the way back to where we park the car which is uneven and really tiring. This had helped me shift a good few pounds over the previous weeks so I was persisting with it. Man and dog walked ahead of me whilst I puffed and panted and told everyone to slow down because, and I quote ‘I can’t walk that fast on this ground, I’ll end up falling.‘

The first thing I said to my man when I landed was ‘I just broke my fucking ankle‘ because I don’t like to beat about the bush. When you know, you know.

I heard it crack twice on my way down and pain like that should be illegal. Man was helpful once he had stopped suggesting that I walk back to the car (hahahaha die). I think I screamed 15 times to phone an ambulance and thankfully, man got the message during the 15th time.

If only phoning 999 was that easy. Man had a terrible time speaking with the call handler who repeatedly asked for the postcode at our location. Unless you are a walking, talking sat-nav, this information is not readily available. Bear in mind that we were also on a cliff with very little signal and no obvious street address. My foot had by this point decided to slip into a position that was giving me a massive boke. I was sprawled haphazardly on the ground waiting for the ambulance. Every-time my knee dropped, I wanted to murder the ground so my man held my knee until the ambulance arrived because he is a good guy.

Corrie was my paramedic and Corrie was sarcastic, helpful and likeable. Her gas and air was a solid 7 out of 10 and her banter was pushing an 8. This is a huge compliment seeing as at the time, I hated the world. Oh yeah and please bear with me, I have never had the chance to review a paramedic before. 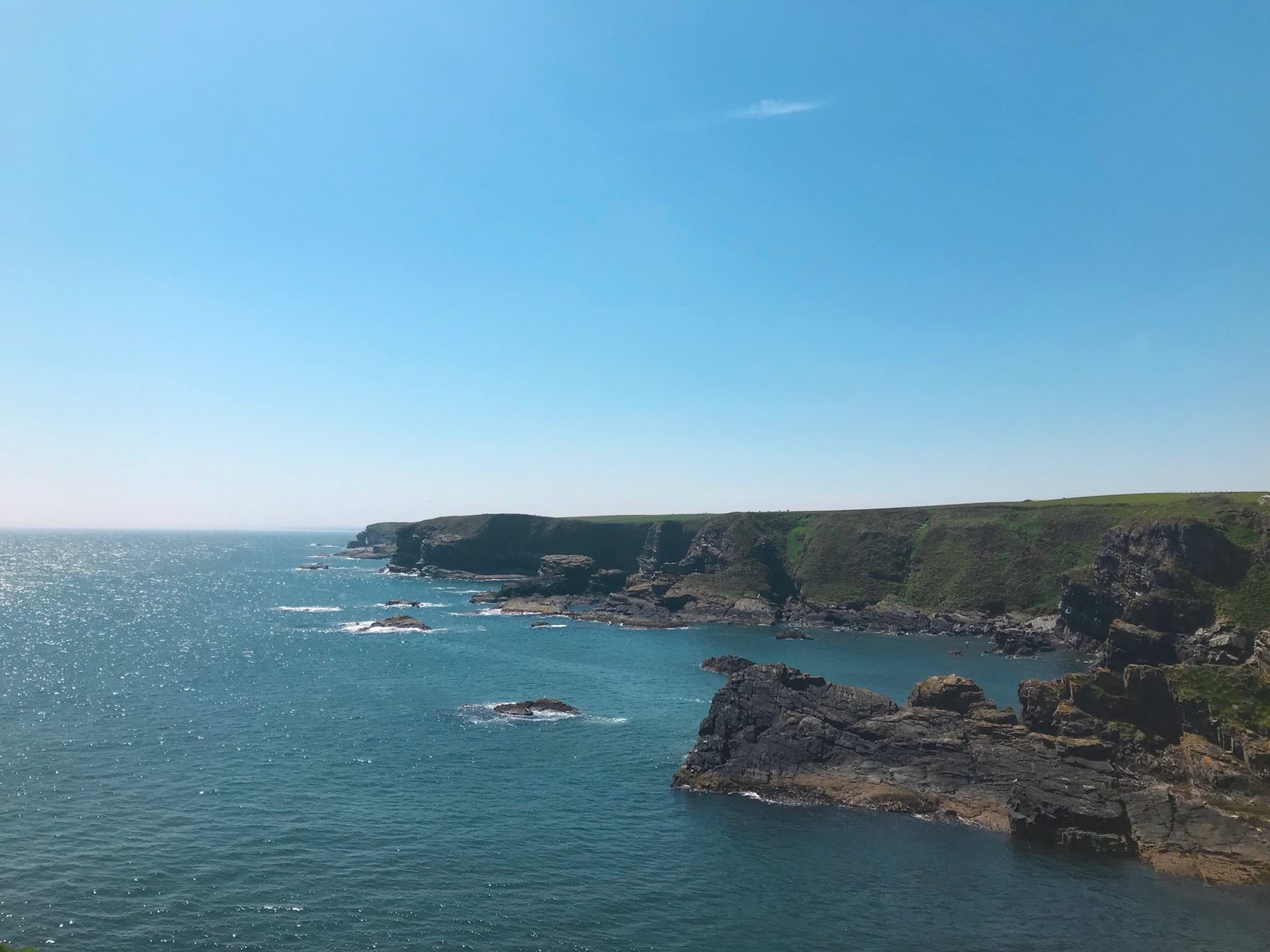 When you’re lying on the side of a cliff with a foot that looks like Twisted Sister and an above average pain rating, news that this is a Special Response job, is not massively welcomed. Supposedly my blood pressure was dropping which I think was due to the fact that I was shit scared in-case this was a helicopter job. I could just picture Twisted Sister and I hanging out of a helicopter like a spangled fried egg. Thankfully, the special response team were literally just 2 more ambulances and a team of people who proceeded to cut my shoe off my foot, which was sorer than shit.

Just when you think your dignity and your foot are at breakage point, down comes the local farmer who was ‘in the middle of birthing a lamb and heard the commotion.’ There is now a North East sheep named after me, take from that what you will.

The sun had gone down by this point, I was getting colder and getting me to the ambulance was becoming more of a task as it became darker. After 2 and a half hours, several blankets, a heap of straps, a tin-foil blanket, a scoop and a team of paramedics, I was mounted onto a wheelie stretcher and stored safely in the back of an ambulance.

The new AWPR is flourishing in Aberdeenshire and it was due to this that my poor ambulance driver got completely lost and ended up taking the wrong road. The fall happened at 9pm, I made it into hospital at 1.15am.

I Wanna Be Sedated 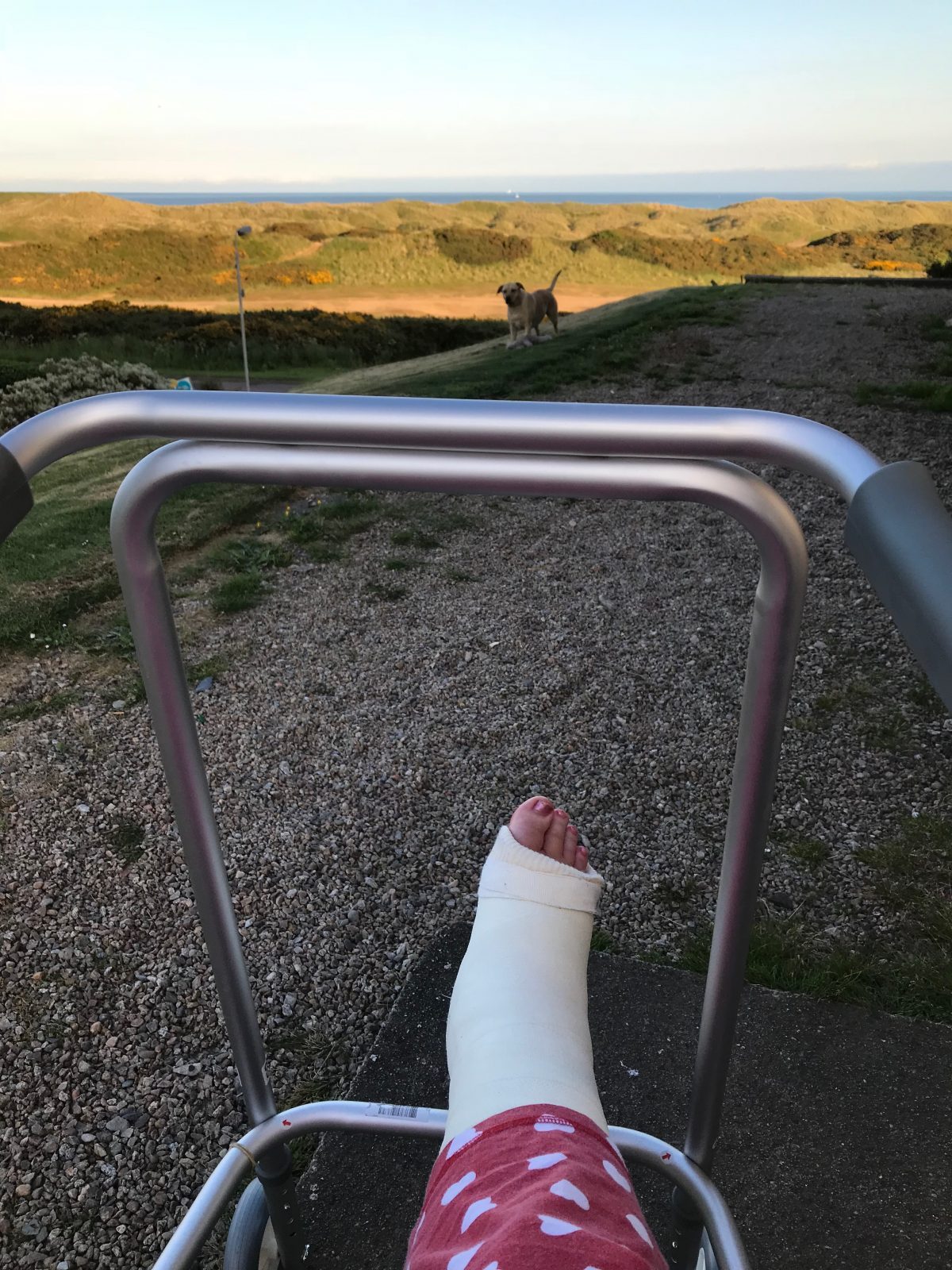 It was evident that I had broken my ankle but I didn’t realise just how much damage I had actually done. The skele-vision came back with 2 broken bones, torn ligaments and a very bad dislocation. They sedated me before putting on cast no.1, with a view to operate the next morning.  Everybody was completely shocked that such a little fall could result in such damage. The surgeons agreed, telling me I had the ankle of someone who had been in a bad car crash. The only car crash in this story is the banter. 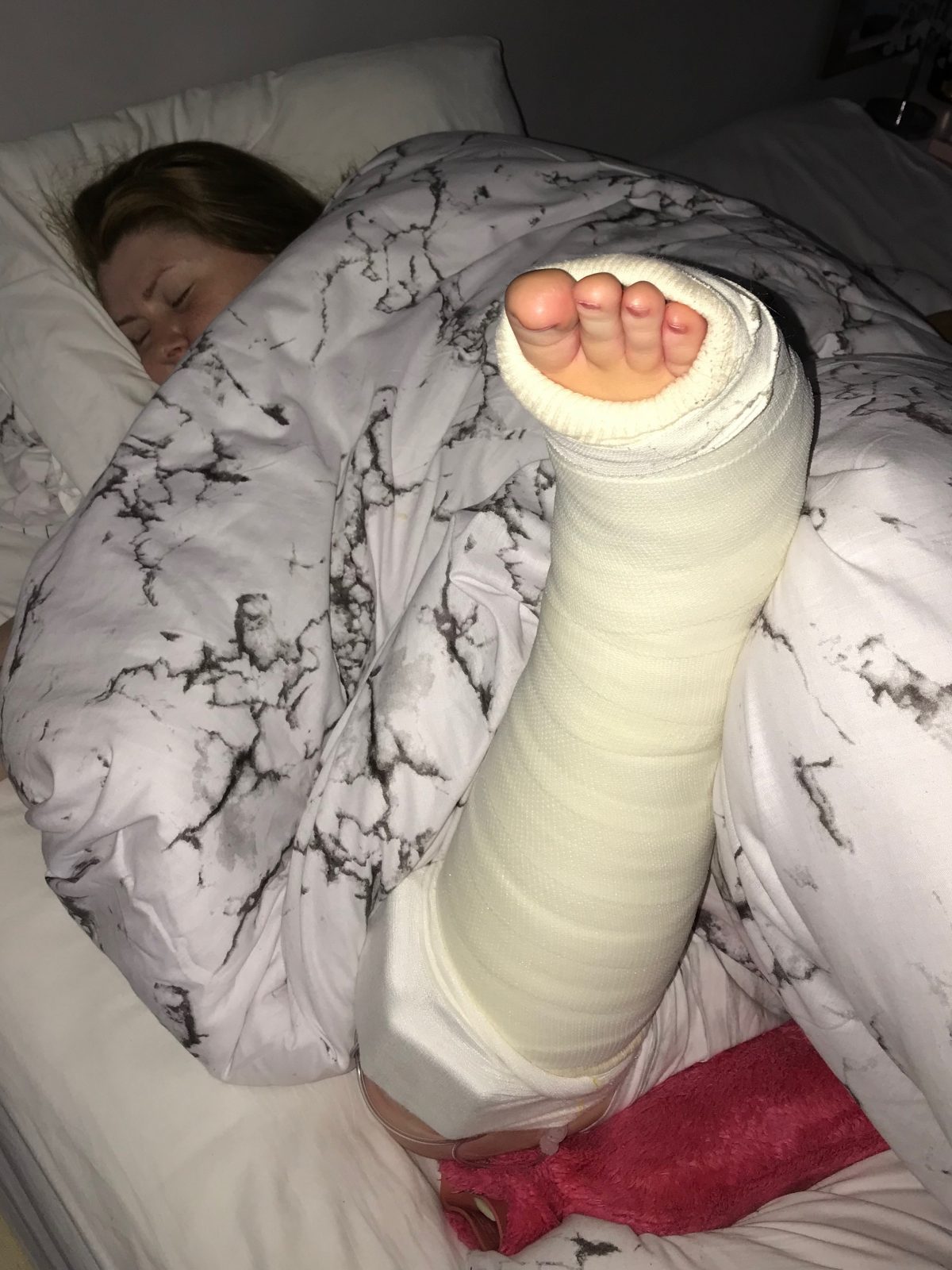 Thankfully, my operation went well although it ran on 2 hours longer than planned. 11 pins and 2 plates were drilled into my bones to make my ankle look like an actual ankle again. My hospital stay lasted 6 days and I spent most of the time sleeping, eating munchies and bossing man around. Not completely out of my ordinary routine.

I might seem heavily sarcastic but I am genuinely thankful for all of the help I’ve received since my accident. Man has been beyond helpful and I will never forget that, dog has been useless as per usual (except one time when she carried my water bottle), my boss has given me more work than ever and I’ve received flowers, gin and cards, although admittedly, not enough gin. This is going to be a testing recovery as I have been made aware that I have a long journey on my hands (or feet) but I am desperate not to let this stop me from getting about.