When I was a little girl, I didn’t dream of becoming a singer or a professional badminton player. These were talents I just happened to be blessed with… In truth, I used to dream that there was a mix up in the Royal set up and one day, the crown would be traced right down to little old me. 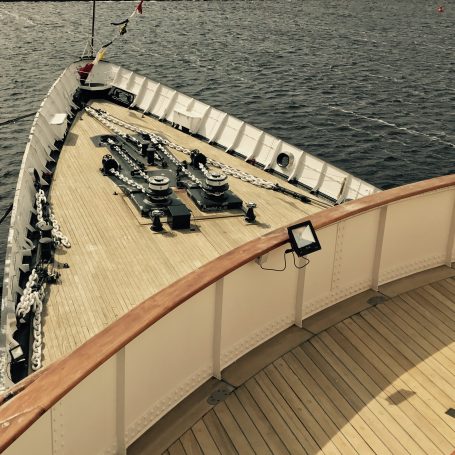 I never really wished for Queen status, as this would definitely be too much responsibility but I would have been keen to start off as a princess. Edinburgh Castle would of been domesticated and I would semi rule the land. Now, who would of been cruel enough to tell a 23 year old child that this wasn’t realistic?

My name is Victoria and due to my knowledge and love for these parts along with my Scottish, patriotic roots, I have given myself such banter-saurus titles as Queen Victoria, Queen of Aberdeen and the Countess of Inverness. For the record, the real Queen Vicky never boarded the Royal Yacht as she was 53 years passed. She never even boarded her own Yacht ‘Victoria & Albert III’ due to concerns about its stability. Or maybe she didn’t want to tempt nautical nausea and that we have in common. Yes, I took travel sickness tablets before visiting the stationery vessel. 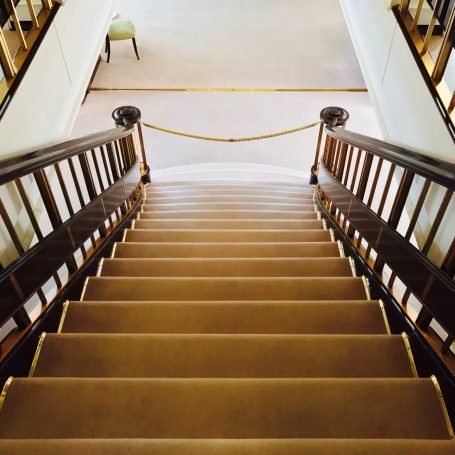 Yo, VIP, Lets kick it

Many an established figure have been invited onto the prestigious decks of the Royal Yacht Britannia over the years. Winston Churchill, Nelson Mandela, Ronald Reagan, Cher… Maybe not Cher but a girl can dream.

The most exclusive guests to board the Royal Yacht Britannia were of course, Queen Elizabeth II and the Duke of Edinburgh. Or at least until May day in 2017 when Scott and I received our Royal invites. Oh and what a day it was. The only difference between us and Her Majesty is that she probably arrived at the port in a limo whereas we arrived on an Edinburgh Bus Tours double decker bus. If you weren’t already keen on checking out the fancy floater, now you can even walk in the same footsteps as us and what a bloody privilege.

That Ship Has Sailed 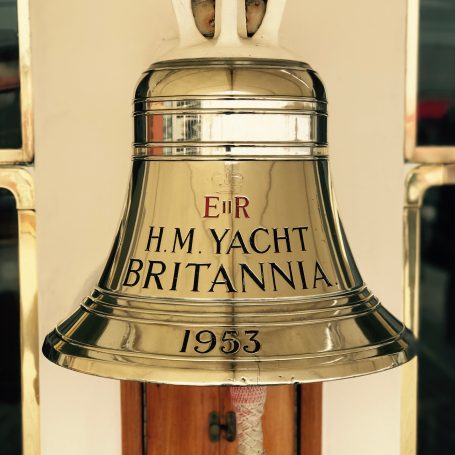 The saucy steamboat covered some serious mileage during her 43 year old prime, approximately 1 million naughty (nautical) miles. A naughty mile is 1.8km long, this is the same length as what rowdy Rabbie Burns called a Scots Mile in his famous banter – Tam O’Shanter.  A Scots mile is longer than an English mile, which explains why us Scots always go the extra mile, we don’t have a choice. Now, to fry your bubbling brains even more, a Naughty Scots Mile is the same length as the Royal Mile in Edinburgh. Therefore this royally pricey piece of tin sailed the length of the Royal Mile 1 million times. I complained about walking the length of it once. Mic drop. 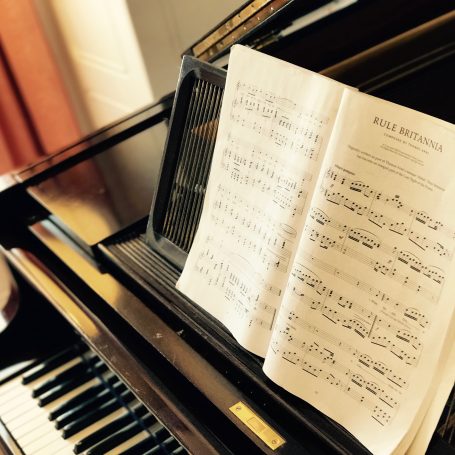 In 1997, they decided to give ballsy Britannia a break or even better, a well deserved retirement behind the Ocean Terminal Shopping Centre in Edinburgh. The perfect place to spend her pension. Even though she has seen the world and is now completely out of action, she likely still runs better than Scotts 12 year old Passat.

No Shirt, No Shoes, No Service

The Queen always makes an effort with her appearance, she isn’t one to roll out of bed and chuck on an oversized hoody whilst sporting yesterdays messy bun. She has always looked royally ravishing and all who sailed in Her Majestys presence also had to look ship shape (sorry, not sorry). The mighty monarch would not have taken too well to leggings sporting dog hair. It is safe to say, I would of been tossed overboard within a royal flush. Typically, the one day that Scott and I were relatively scrubbed up, Queen E had prior engagements. 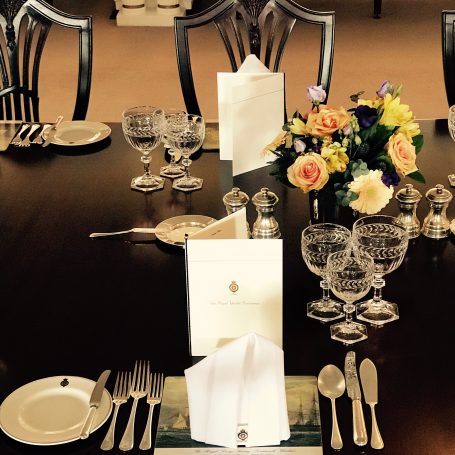 An officer on board the floating ship show was expected to look, act and sing the part. They had a series of outfit changes, putting the Oscars to shame. As any fashion conscious woman will know, with outfit changes comes washing and hell hath no fury on the pair of staff shorts that ends up in the washing with the royal knickers. Staff washing was done on completely separate days to Royal washing. I guess it makes sense, the hard working boys below deck got Daz whilst the Queens socks were cleaned with fairy dust from a unicorns ar… 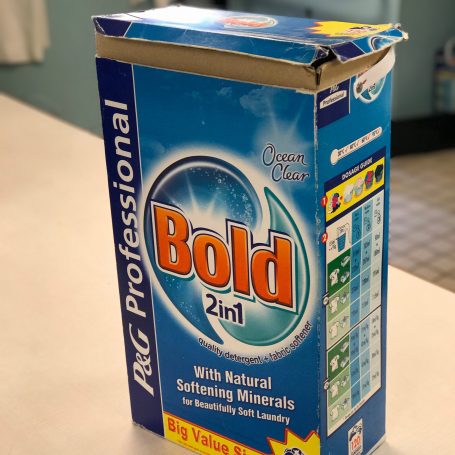 Darted randomly around the exquisite ship interior are various gifts that Her Majesty has received during her boat years. Classy cabinets take pride in displaying sassy silverware and expensive entities. I got pretty cosy with one of these items, a mini flagpole ornament, complete with flag. Apparently when the flag was raised on said flagpole, all drinks were on the highest ranking officer. 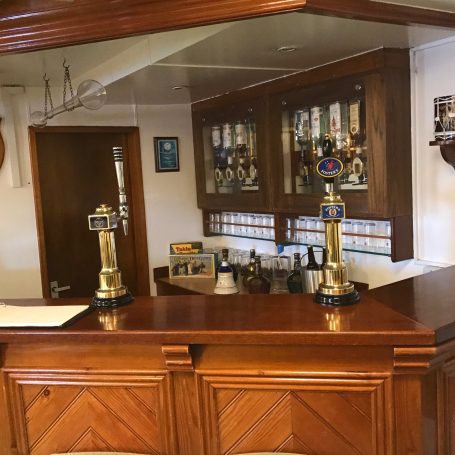 Either luck was out or they seen us coming as we left the yacht more sober than we boarded. 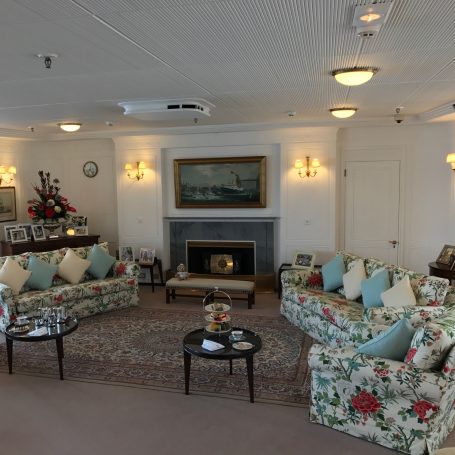 By far the best part of the blissful boat-ique are the royal apartments. Visiting this part of the ship really put into perspective the lack of zeros on the end of my bank balance. Before visiting the apartments, I had food in my belly and a license for my telly and nothing gonna get me down. Since then, I have drawn up a 4 month business plan on how I can have an exact replica of the bada bing bada boom Britannia. 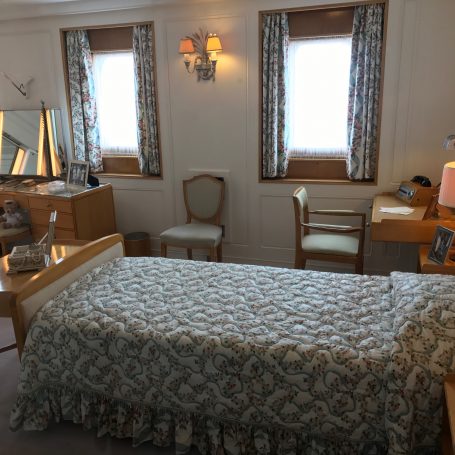 The interior of the royal apartments is elegant, yet demure. There are no Trump like extravagancies but yet the decor is tasteful and comfortable and I am still there now. Initially, the plans for the apartments were elaborate with no expenses spared however the Queen turned down these plans as they were not appropriate for post war Britain. 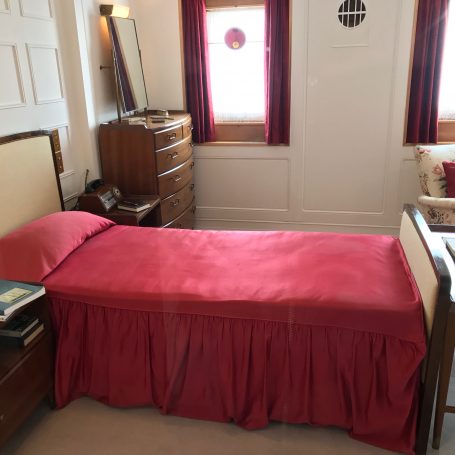 Surprisingly, the Queen and the Duke slept in different bedrooms, with understated single beds. There is only one double bed on the whole ship and this is in the honeymoon suite where Prince Charles and Princess Diana spent their honeymoon.

Wheels on the Royce go round and round 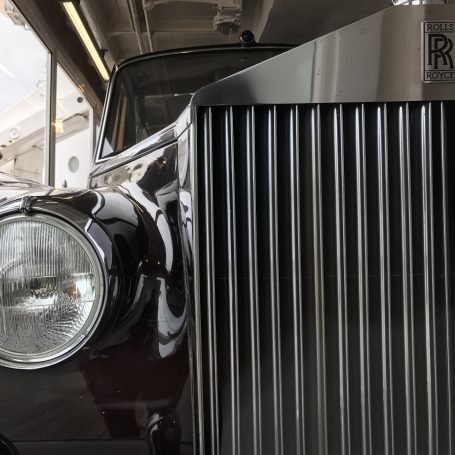 Britannia even has its own wheels and these wheels don’t come cheap, Significantly showcased on the Britannia is the Queens previous state car. She took her foot of the royal clutch and the car was retired in 1978. The black Rolls Royce Phantom V (we share a nickname) is encased in glass to stop the likes of you and I sneezing on it. 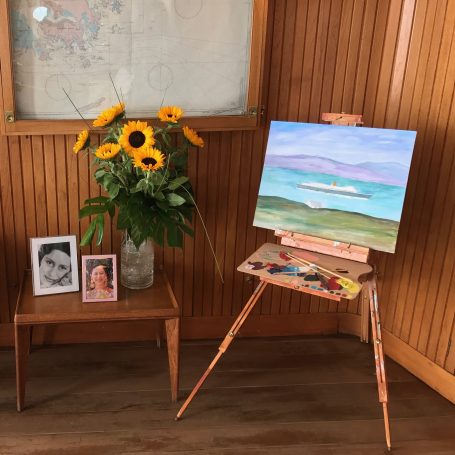 Unfortunately all great things must come to an end and in our above standard fashion, I will sum this trip up in a way that seems fitting…

Our posh Queen bee sailed the seas
While my King Scott had sea sick knees
The Ace was drunk, he won at poker
While little old me is a ship hot joker

We would like to say a big thank you to the Royal Yacht Britannia Trust for a very warm welcome and a fancy branded envelope containing complimentary tickets. The staff were extremely professional and the Royal Yacht Experience is one of a kind. As always, our banter cannot be purchased, unless the price is right :)…