Autumn is in the air and I am feeling the vibes. In fact, I am the vibes. If you come anywhere near me at the moment, you’ll probably catch the vibes because they are seriously contagious. Symptoms include; the overuse of fluffy socks, squealing at all decorations, lusting over coloured leaves and buying 14 new throws. Flippin’ oops. But what a time to be alive. On the train from Aberdeen to Edinburgh, all I could do was ogle over Scotland’s epic Autumn-ery. Autumn is perfect. And most tourists who come here, miss this. There is nothing better than exploring Scotland in Autumn. Edinburgh’s architecture against an Autumnal backdrop = verging on orgasmic.

If I wasn’t already in love with Autumn, staying at the Radisson Blu Hotel on Edinburgh’s Royal Mile would have done it for me. The hotel’s location is absolutely perfect. Bang on the Royal Mile, minutes from the train station, seconds from the shops, and certainly not spoilt for restaurant options. And something rare happened during our trip to Edinburgh… We weren’t rushed off our feet. In fact, the whole trip was pretty luxurious. Our Friday stopover and Edinburgh love affair required nothing but relaxing treatments, fine meals, and spectacular cocktails. 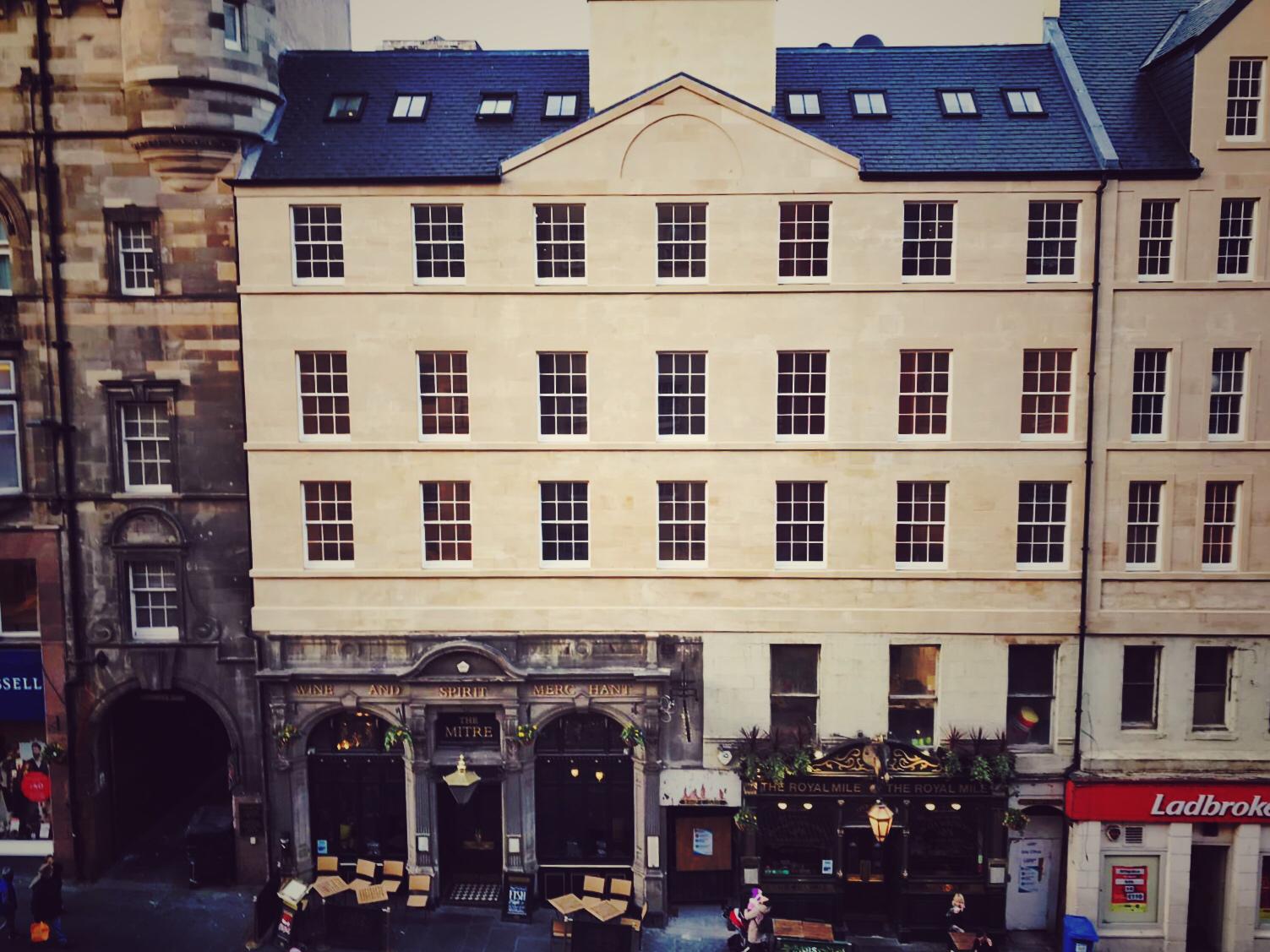 We had previously been staying at another hotel, which was central but in a slightly quieter area than The Radisson Blu. So we were really looking forward to being right in the middle of the action. We had taken the train down with ScotRail, which was far more relaxing than driving. And Scott becomes a happier human when he doesn’t have to drive. But (and this blew my tiny mind), the hotel has a bloomin’ car park, on the Royal Mile. Considering Edinburgh isn’t famed for its abundant parking, I couldn’t quite believe that a hotel so central had its own carpark. 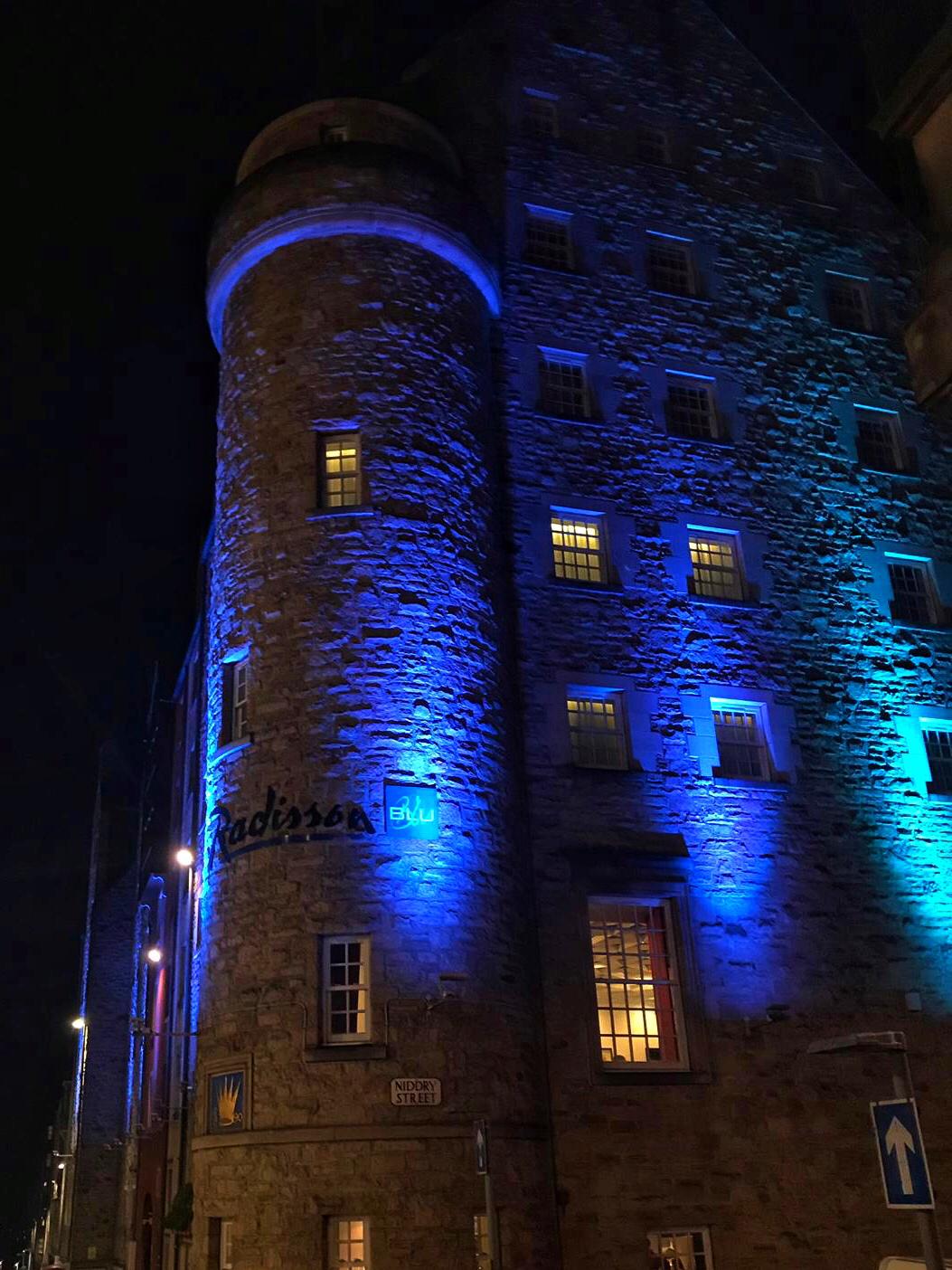 This was our first time staying in a Radisson hotel. We were met with a warm Scottish welcome at the reception, which was bright purple and decorated tastefully with Halloween decorations. Could there be a better city to be in on Halloween than Edinburgh? I was totally feeling the Halloween vibes and spent most of check-in away in a daydream, leaving Scott to deal with the formalities. 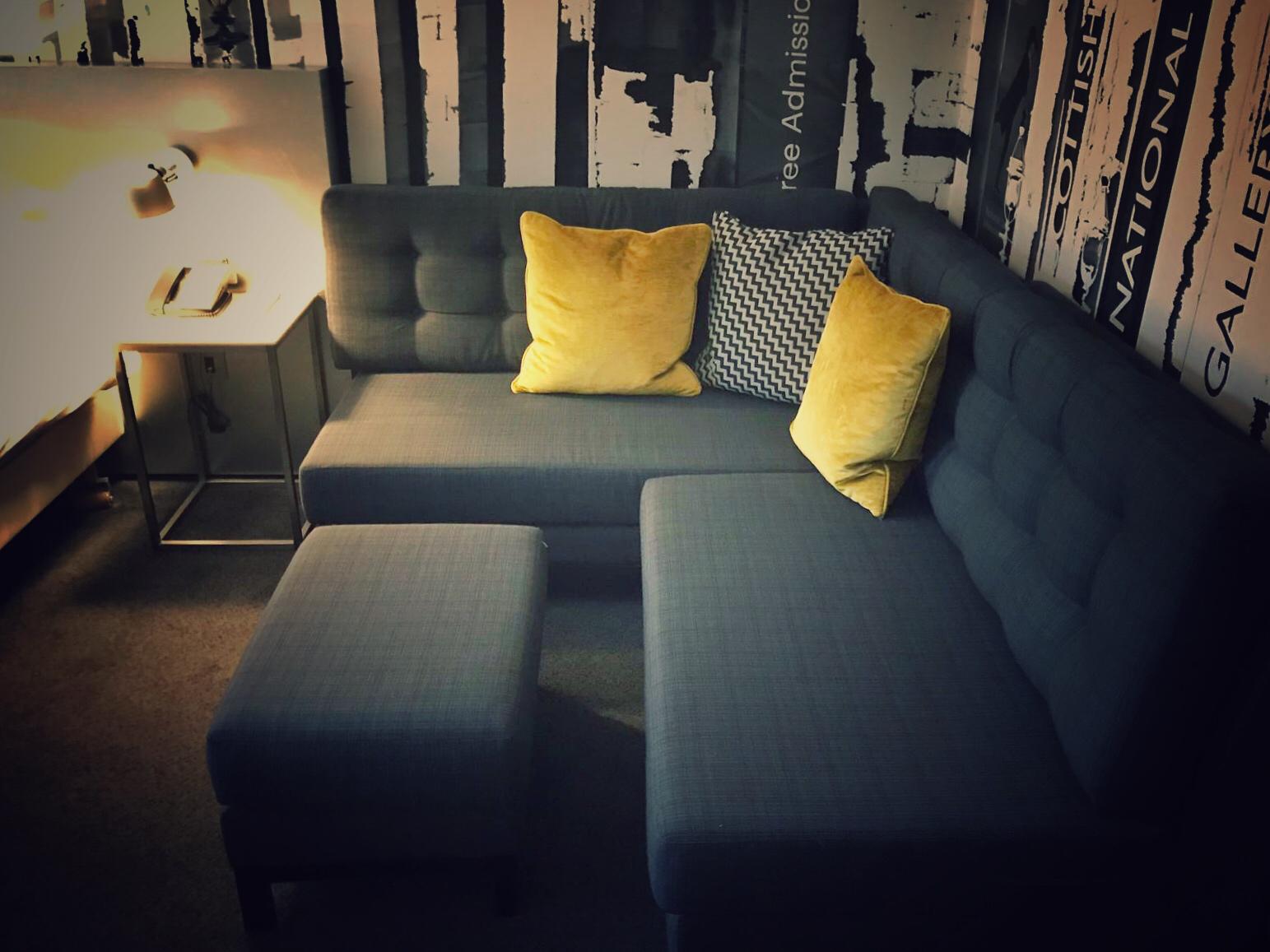 We were directed to room 323, with no idea what to expect. The exterior of the Radisson, like most buildings on the Royal Mile, is older than life. But the interior is completely modern. Our room featured black and white wall-art with splashes of yellow. We had a great big bed and an L-shaped sofa, with a tremendous view over the Royal Mile. We’d also been treated to chocolate covered strawberries and a bottle of red. Which let’s be serious, didn’t exactly hurt. 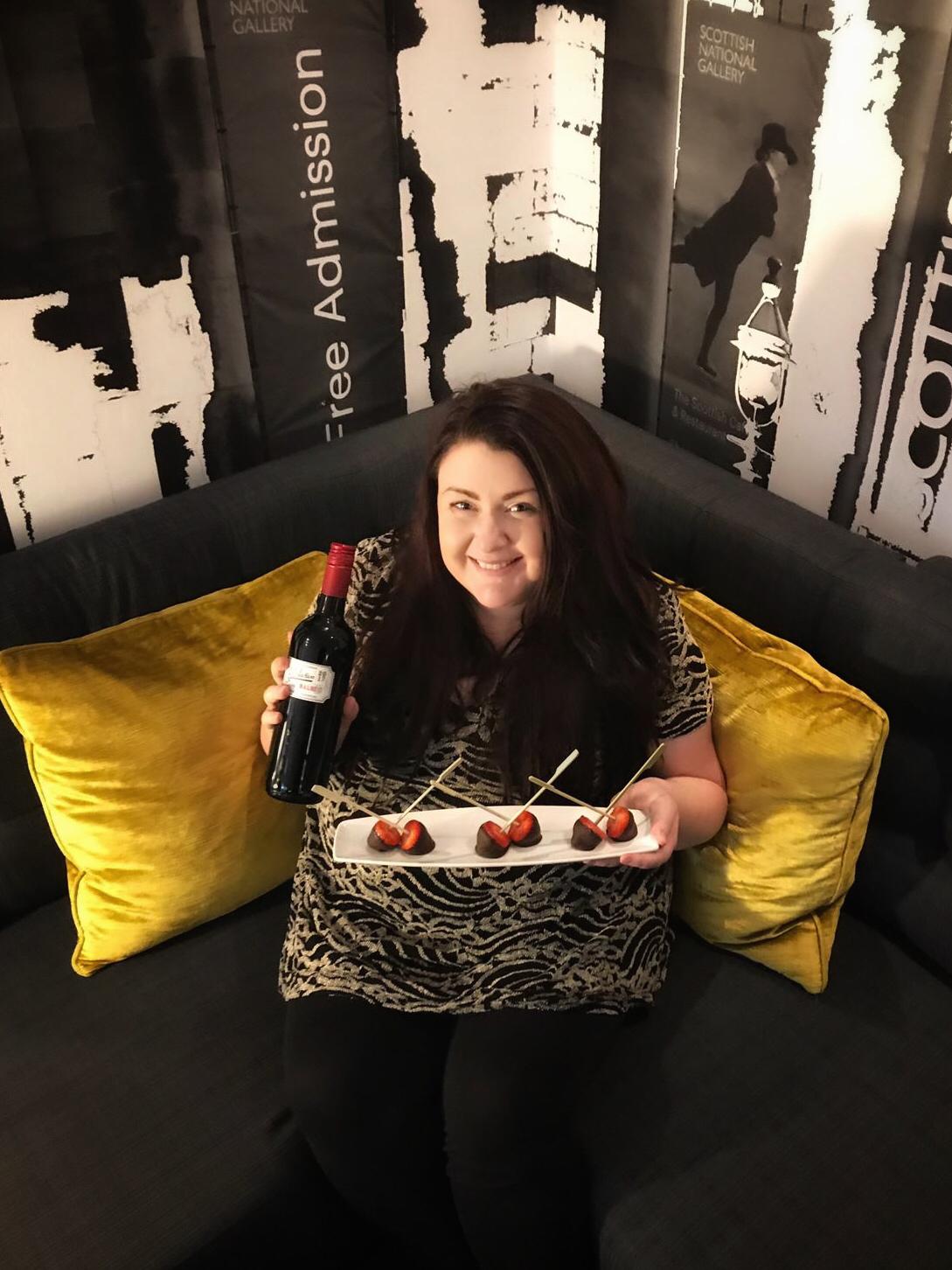 Across from the bed was a large well-lit dressing mirror. The room also had a drinks fridge, hot drinks tray, a kettle with tea and coffee, and a hair-dryer. The bathroom was pristine, comprising of a shower-bathtub combi. The room was also completely soundproof which kept the 3am Sweet Caroliners completely at bay. 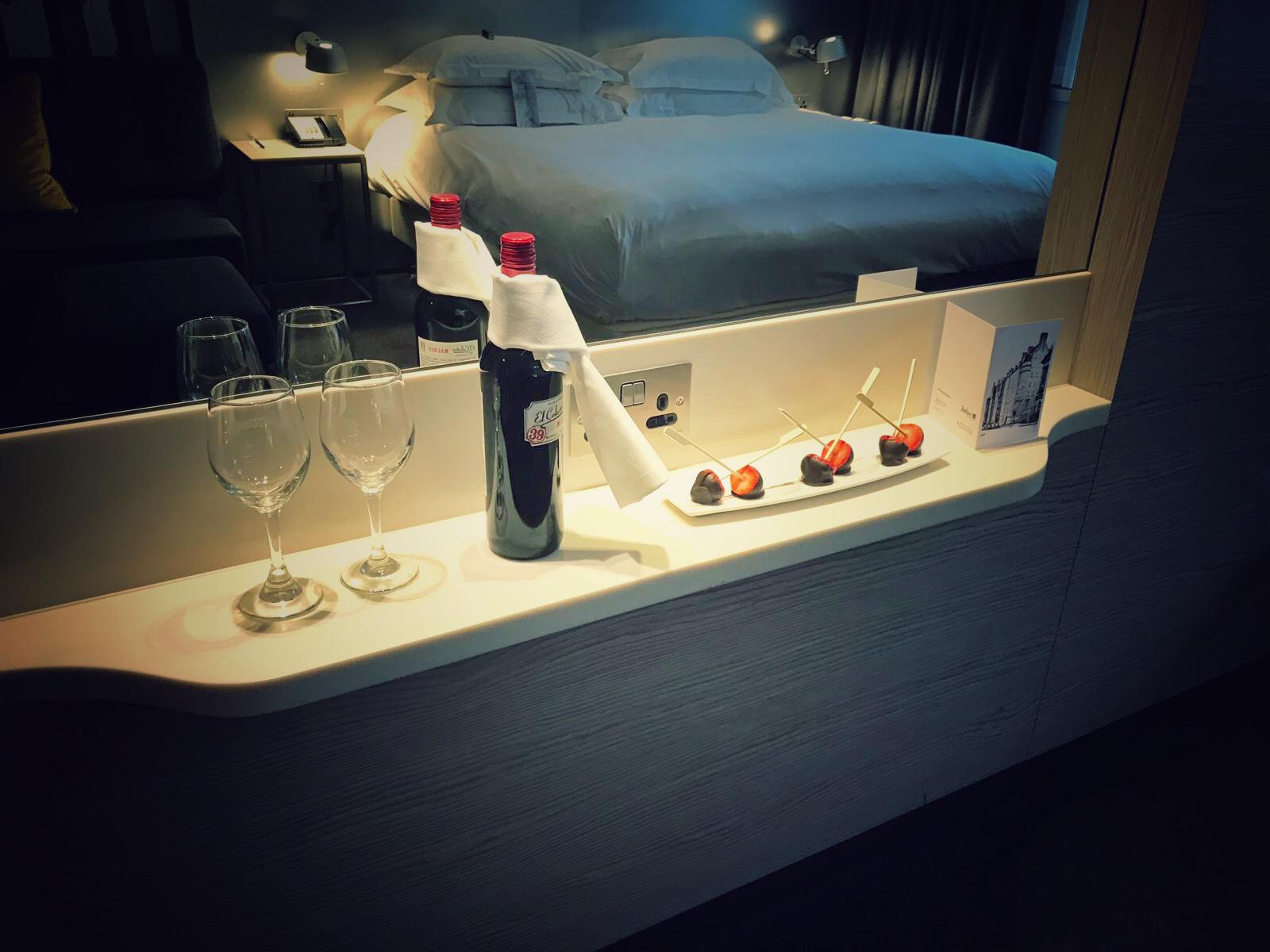 The bed in itself was worth the stay, to the extent that I’ve actually taken a note of the bed type home with me, with a view to getting my own one day. It felt like we were sleeping on clouds. 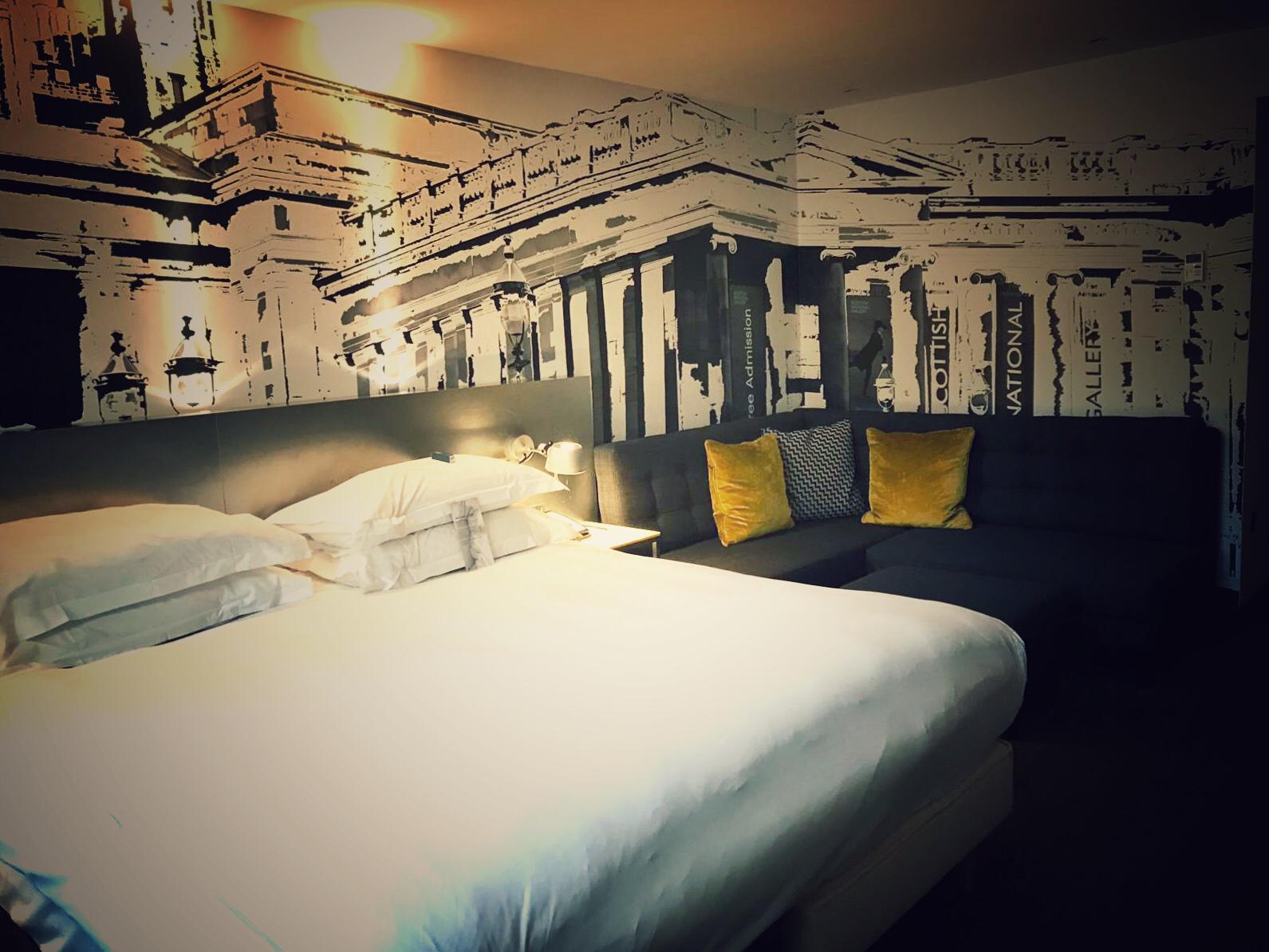 The hotel itself has a bar and restaurant named the ItchyCoo and there is also a beautiful dining room, in which we enjoyed a hearty Scottish breakfast and too many pain au chocolat. There is also a Sleeping Beauty salon in the hotel which despite 4 phone calls, was completely booked up during our stay. The salon services are very reasonable so if you do choose to stay here, book in advance.

Overall, if you are looking for a luxurious getaway at a fantastic price then check out the Radisson Blu Hotel in Edinburgh. They quite often have package deals which are great bang for your buck. Should you be feeling festive, the hotel also has plenty on through the festive period. Alternatively, have a nosy at the Radisson website for current offers and deals.