Scott loves whisky, I like gin. However sometimes when whisky is free, I like whisky and gin. During our initial run in with The Singleton Whisky, I was up to my eyes in the dashing dram and practiced little discrimination. We hadn’t initially planned to visit The Singleton tasting room at Tales of the Cocktail however one thing led to another and to be honest, it would have been rude not to. Besides, many whisky lovers would have hunted me down if I turned down a spread of aged whisky. In fact, I would have hunted myself down for such a crime. This is where we first tried The Singleton of Glendullan. I didn’t expect to actually enjoy my dram however the flashy bar-tending and the edible cream topper had already sold it to me. The smooth, dancing tastes were a bonus. 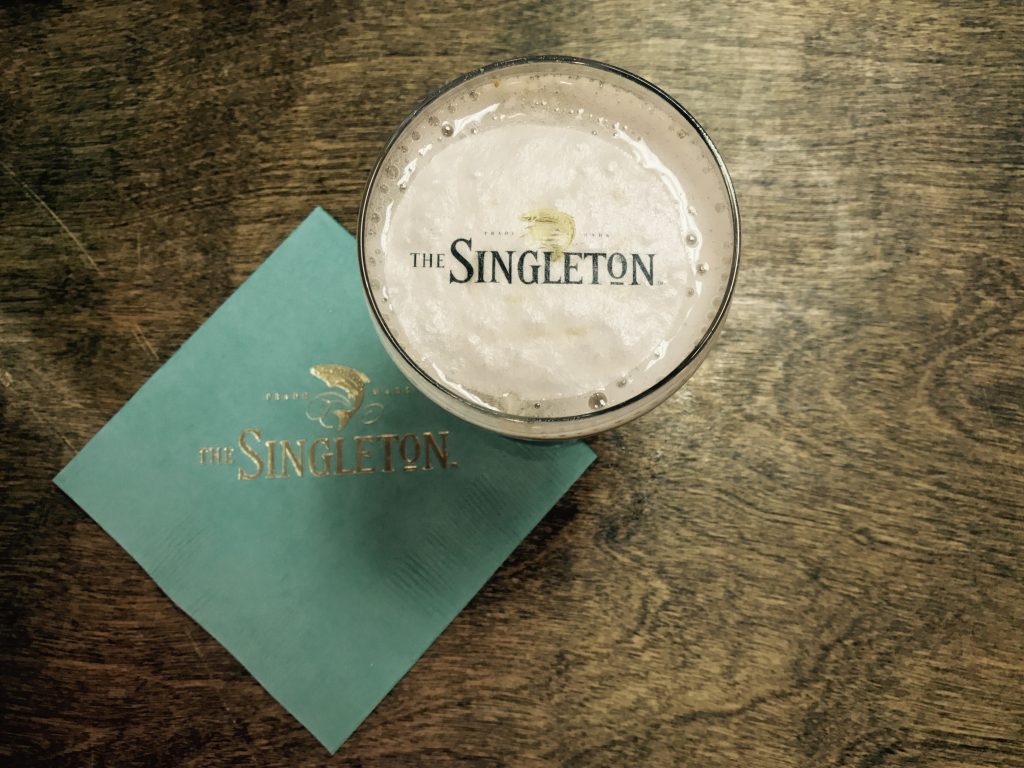 The Singleton of Glendullan is made specifically for the American market, catered to a very specific taste. At this point, I was beginning to realise I had an American taste for booze. I also have an American appetite, both of which were later damaging to mwaistlinene. 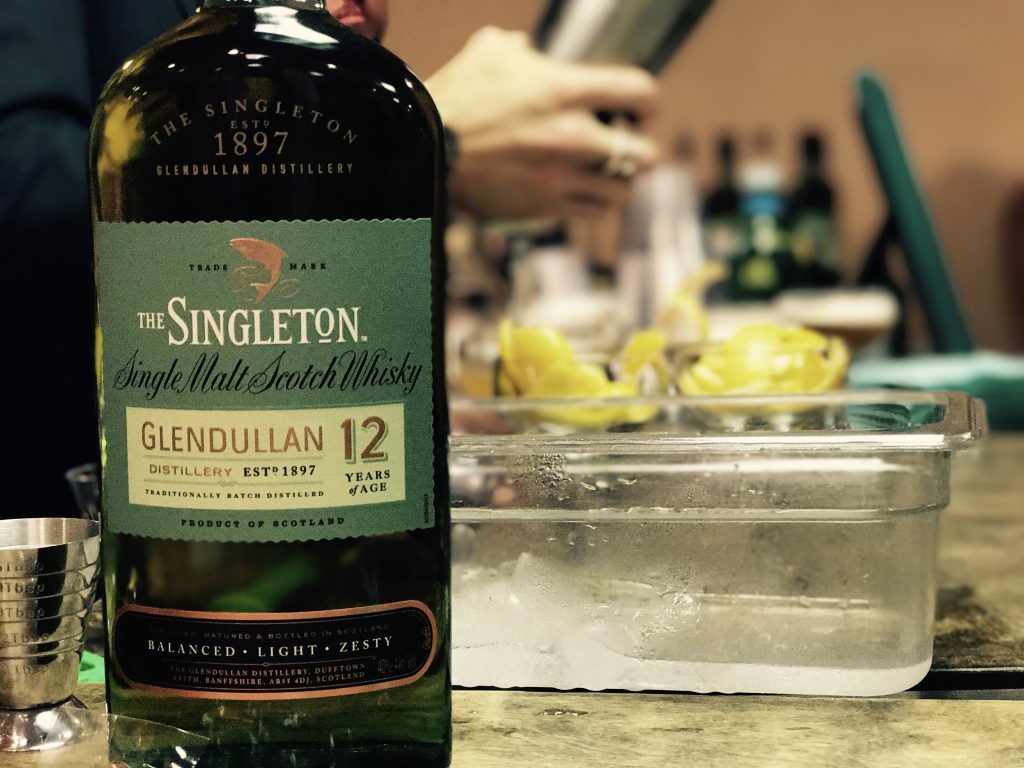 25th birthdays aren’t generally celebrated and nobody really fusses over them. I am not nobody and I fussed more than most. Like the queen, I took a whole week to contemplate (celebrate is a strong word) my birthday. We headed up to Inverness to spend the week with a pretty crazy crowd known as my family. Nobody was cruel enough to mention the big 25 until the actual day however waking up to the first display of affection I have seen from my granny since birth was unsettling and I knew people were attempting to lift my spirits.

Not long after this, my partner in crime arrived by my side with a home made hamper. Who doesn’t love a hamper? Cuddled within the hamper was a bottle of gin, a bottle of cava and a whole range of copper bar ware. I am not a bartender and couldn’t help but feel this was a kick up the rear end to get on with my cocktail plans for the blog. Tales of the Cocktail left a lasting impression on me. Also, I like a drink but I’m not heavy on the sauce. This was another attempt at lifting my ‘spirits,’ so to speak.

After a week of sun, hot days and humid nights, I had a slight hope for a sunny Saturday. However, Inverness knew it was my birthday so it decided to bucket rain all day. . In order to lift myself out of 25 tantrums, I suggested going for a ‘wee drive.’ This in itself was pure irony considering I suffer with travel sickness. Scott was doing his utmost to cheer me up, acting like a different man from the rest of the year. Yet another reason for me to feel unsettled.

In order to entertain Scott and show him the true wonders of Inverness-shire, I took him out to Beauly. I say ‘I took him.’ I sat in silence with grey gulls while he drove me to Beauly. We took the ‘Moray Firth Tourist Route’ which exhibits much of Inverness-shires Black Isle. The Black Isle sounds scary and I am sure some of the residents are. However it doesn’t actually take its name from anything sinister. It in fact refers to the dark rich soil in the area. I grew up in Inverness and until very recently, I forgot that Inverness and the Shire are actually quite bonnie areas. 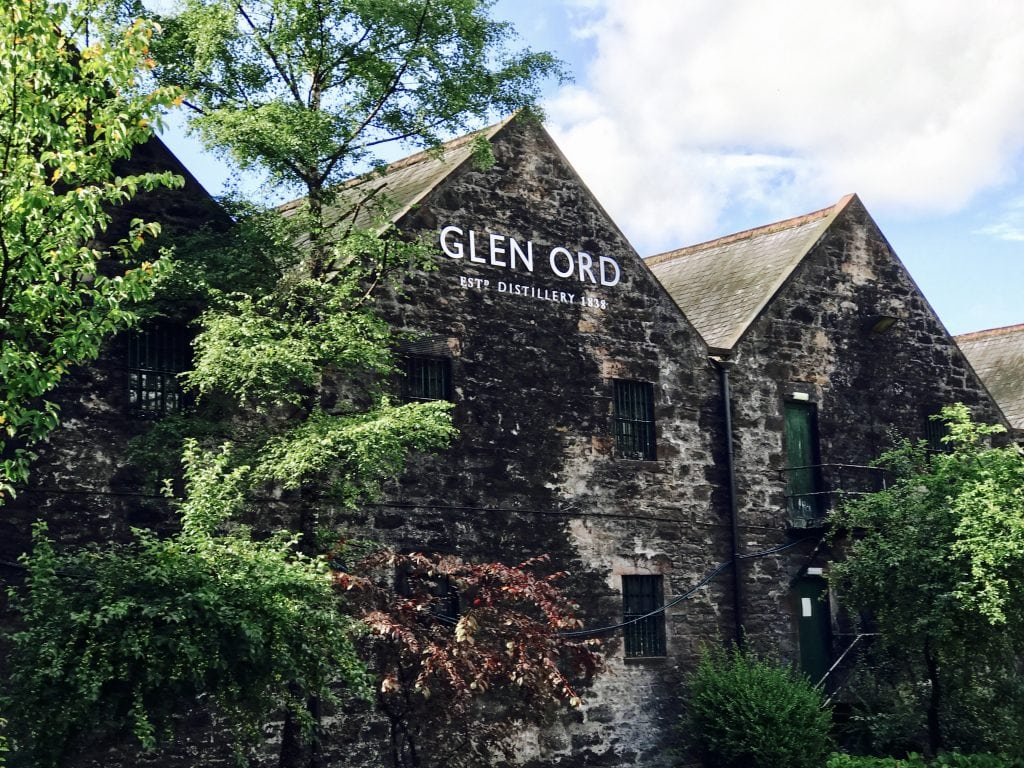 After driving through Beauly, we passed by Muir of Ord where we noticed a sign for Glen Ord Distillery. Neither of us had heard of Glen Ord at this point but a little like the free aged whisky at Tales, we thought it rude not to. Before stopping off at Glen Ord, we went for a drive round Strathpeffer, an old Victorian spa resort. Fully recommend a nosy round the village if you have time, the buildings are gorgeous!

Expect a drive of less than half an hour from the Highland capital to Glen Ord Distillery. Glen Ord isn’t visible from the main road through Muir of Ord which is a shame considering the distillery itself is really quite breath-taking. The history behind the area is rife, with the land originally granted to the Mackenzies of Ord by King Alexander III in the 13th Century. In 1820, Thomas MacKenzie of Ord inherited the estate and set to work on rejuvenating the area. A large part of his land was purely dedicated to the growth of Barley. He thought by leasing the land for a distillery to be built, he would assist the locals with work. It wouldn’t have been so convenient back then for the locals in Muir of Ord to commute through to Inverness.

The Singleton Whisky Round 2 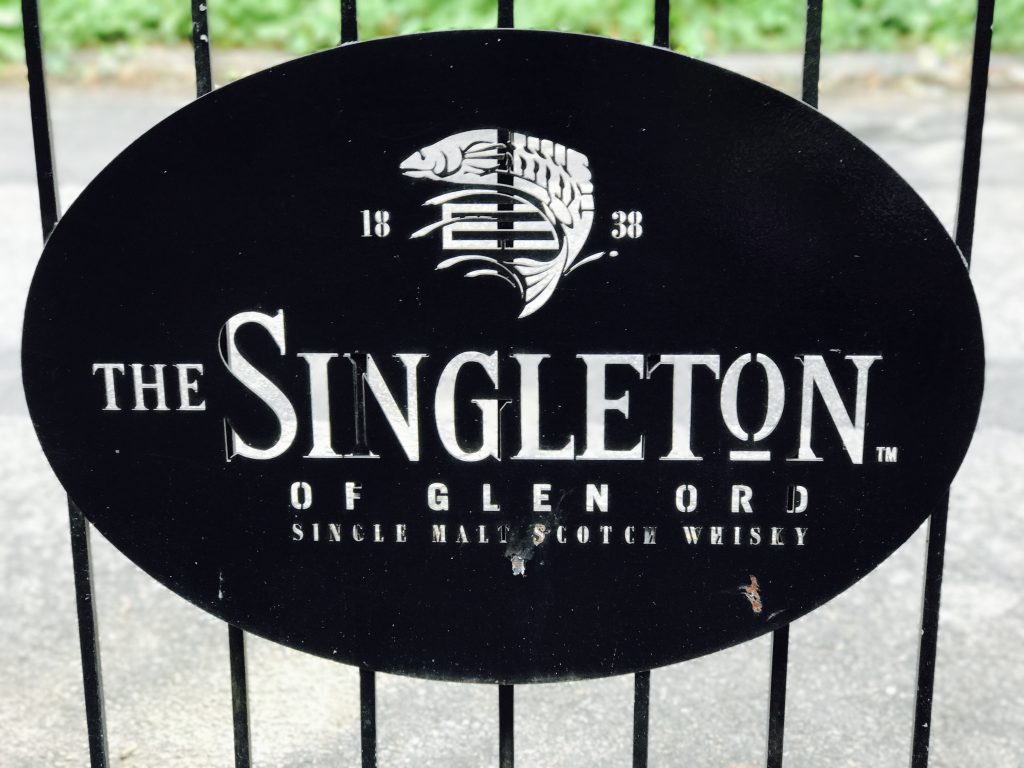 When we arrived at the pretty distillery, we genuinely had no idea what whisky was created within. It is safe to say we got very excited when we seen The Singleton branding on the gates upon entry. Diageo own the distillery now which isn’t much of a surprise considering Diageo own a massive proportion of the worlds booze. Although we had questions, why was The Singleton being made at Glen Ord? We specifically recalled tasting The Singleton of Glendullan but this was Glen Ord. So many questions were arising. I told myself before visiting that I wasn’t going to do a write up however as soon as we arrived in the car park, I already had a story in mind. Blogger by name, blogger by nature. 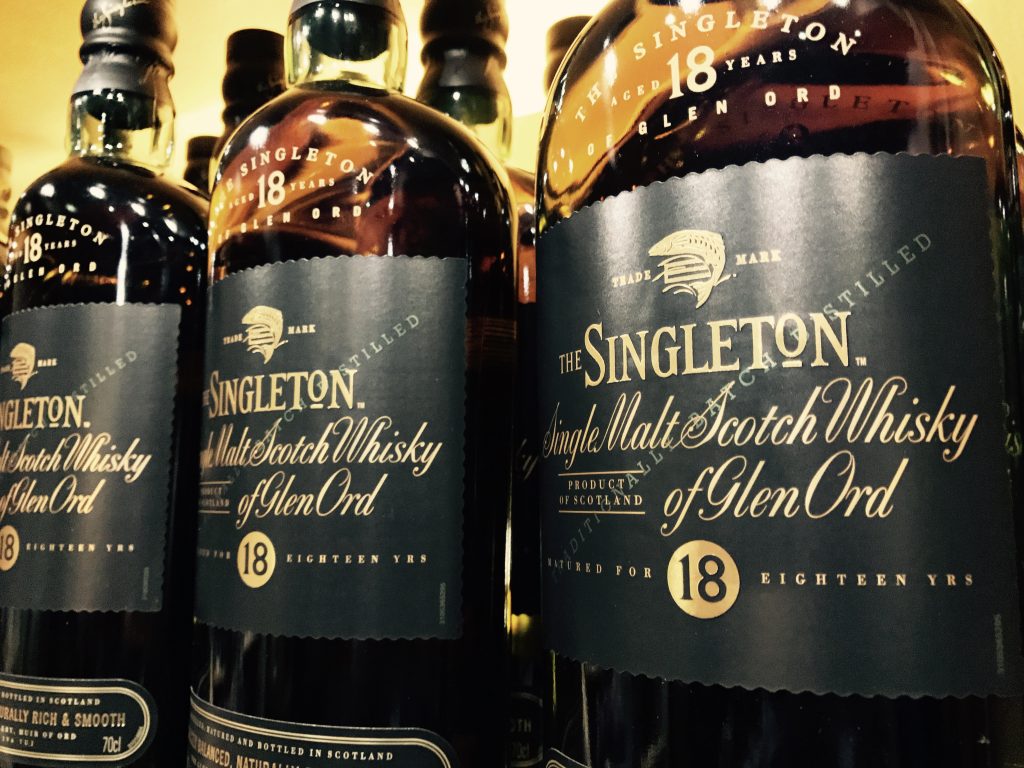 Glen Ord Distillery is the last single malt distillery left in the Black Isle. I don’t know what we expected as we have visited many distilleries that make a malt which is sent to be blended. We initially expected Glen Ord to be concocting some weird and wonderful malt which would be sent to be mixed in some well known blend. The bonnie wee Scottish distillery, just up the road from my home town is making The Singleton whisky for the Asian market. This couldn’t have been more random. More importantly, I couldn’t wait to lip lock an 18 year old Asian Singleton.

Hostess with the mostess

Sally was our tour guide and she was bang on with dram chat. We arrived at a fairly quiet time so there was only 4 other people in our tour. Before she commenced the tour, she asked where everyone was from for translation purposes. We have been on tours where the tour guide has spoken with a thick Scottish accent and people from far and wide haven’t understood a word. The other tourists joining us were from the Netherlands and the U.S. We were pretty vanilla but had the local lingo advantage.

Sally deserves full credit for connecting with the group, she was more than willing to answer any questions. In these situations, people usually feel awkward being the person to speak up first especially in front of an audience. She made sure that the group felt comfortable. 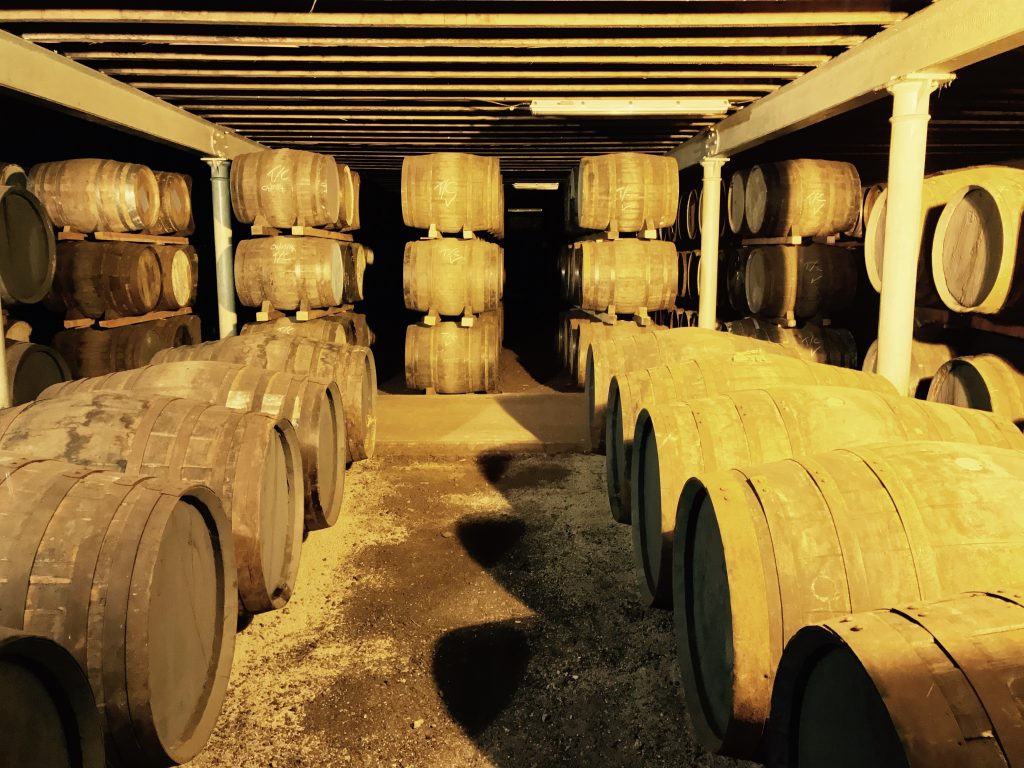 Christmas came early in the barrel storage room. There were barrels of beautiful booze for days and the smell in the room had the Americans in our crowd in seventh heaven. Our living room has a similar malty smell at the weekend so we were quite used to it. Sally went on to tell us that these barrels would stay in this room for years at a time, steeping to create the tastes of The Singleton. Interestingly enough, when the whisky is steeping, a proportion of it actually evaporates. The vapour escapes the cask and rises, hence why they call it the Angels share. We must have some pretty merry Scottish angels. Me being one of them!

Between where Scott and I were standing, there was a teeny weeny little puddle. Sally was quick to point out to the group that this was from whisky which was escaping a cask from above. It is concerning that the first thought to enter my head was to look up with an open mouth. She soon made me aware that there was probably a good few spiders kicking around the barrel room. My mouth was soon firmly closed. They call the whisky which escapes from above, the ‘Devils Share,’ Of course the Devils Share would be between Scott and I. It must of been Scott that attracted it. 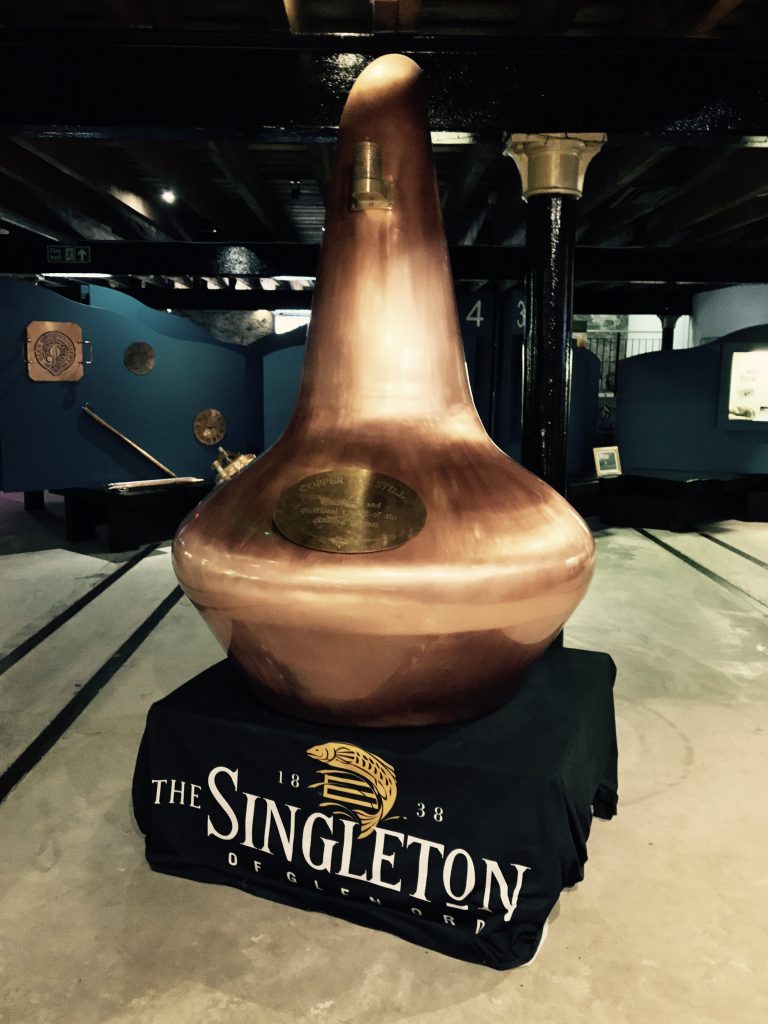 Along with the already massive, copper stills was a number of wash bays. The room was scorcho and we soon felt like we were back in New Orleans. The Americans loved it while we wasted away at the back. It was totally worth it to get a good look at the huge stills in the room. Glen Ord Distillery have actually expanded fairly recently to double their capacity. There is a new building at the back of the distillery to include several more stills and wash bays.

It was pretty interesting to see where the stills had broken. You don’t really think about a whisky still needing repairs, purely because they are made of copper. Whilst everyone else admired the scents and sights in the room, I was looking at the lumps of copper repairs on the stills. I also wondered whether I could look for a job fixing stills or even an apprentice position that involved plugging the hole while it was fixed, with my mouth.

Whisk me up a whisky 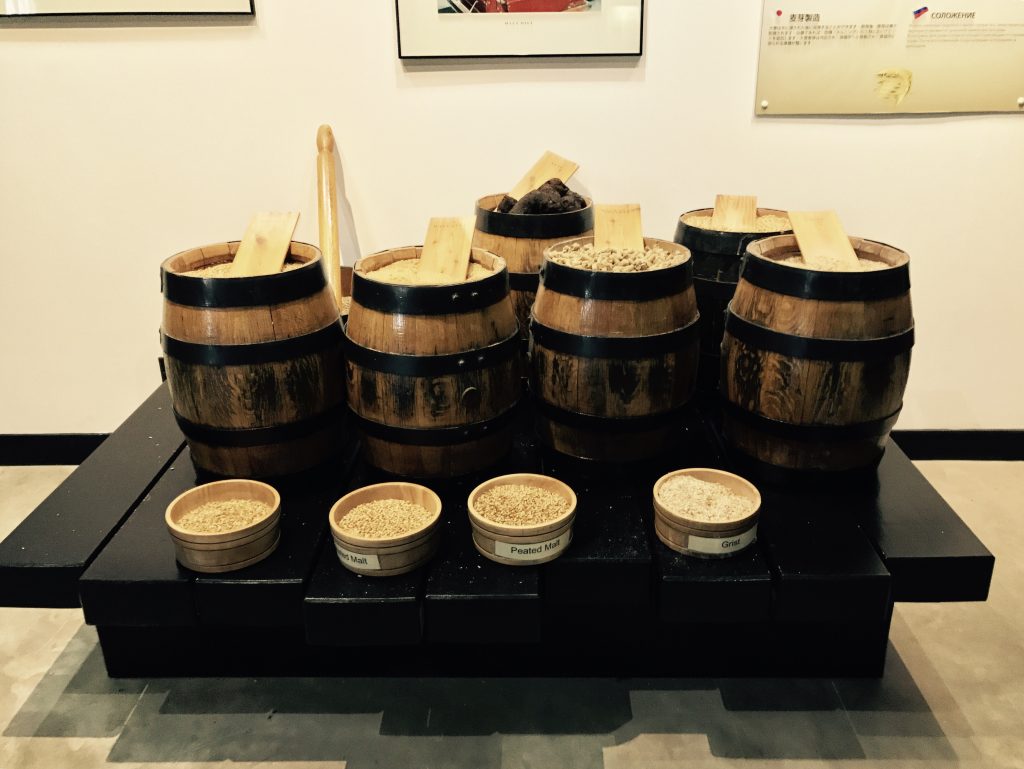 The last part of our tour consisted of a walk round the little museum area at the beginning of the tour. This includes some information about the cultivation of the area, the heritage and a display of all the flavours that tasters have picked up over the years. In keeping with my boozy birthday, Sally brought out the goods. On her tray of glory were a variety of aged drams. Scott held back his tears while I tasted a 12, 15 and 18 year old Singleton.

At this point, I wasn’t complaining but instead planning a bottle purchase and a blog round up. Sally disappeared again and returned with pretty little rolling glasses for all of the tour-ees. Who doesn’t love branded glassware? Our cupboards are packed! I now officially have a Singleton glass which came from the Glendullan room at Tales of the Cocktail and another Singleton glass from Glen Ord Distillery. I realised at the end of our tour that I also had a Singleton brooch on my bag from Tales of the Cocktail. If The Singleton are looking for a walking brand ambassador, I’m your girl! 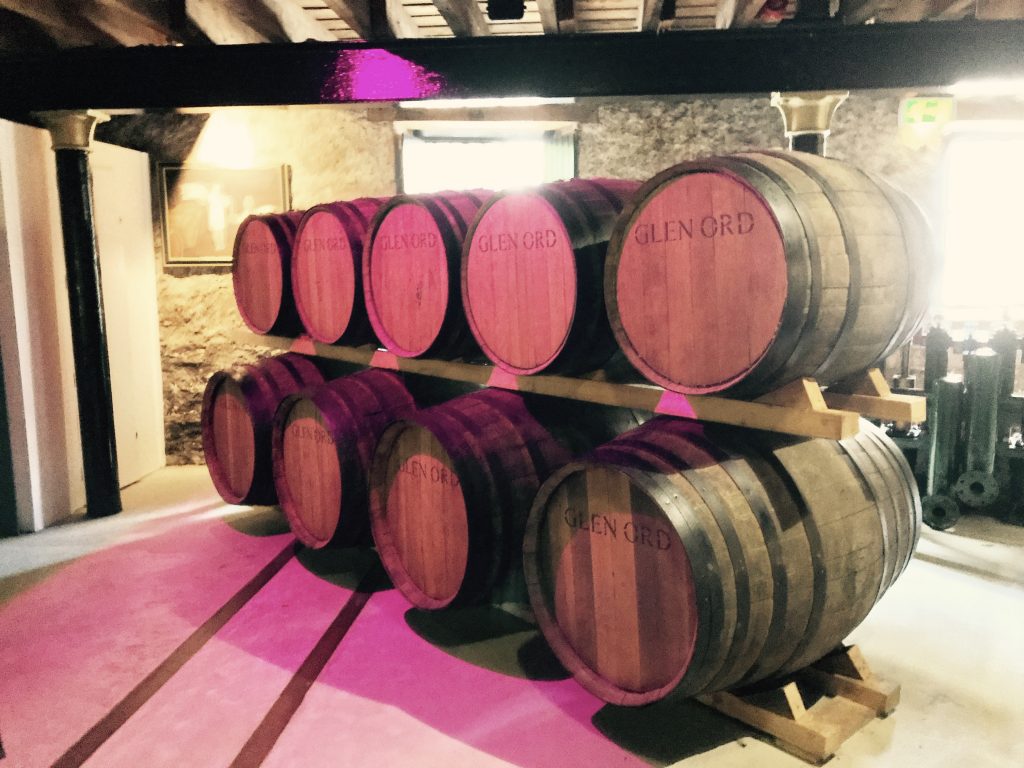 Should you be interested in visiting Glen Ord Distillery, we would highly recommend that you take a full day out so you can see the beautiful surrounding areas. There are some lovely little cafes in Beauly and Muir of Ord and Strathpeffer is definitely worth a wander round. Should you catch the area on a nice day, the views can be quite spectacular. 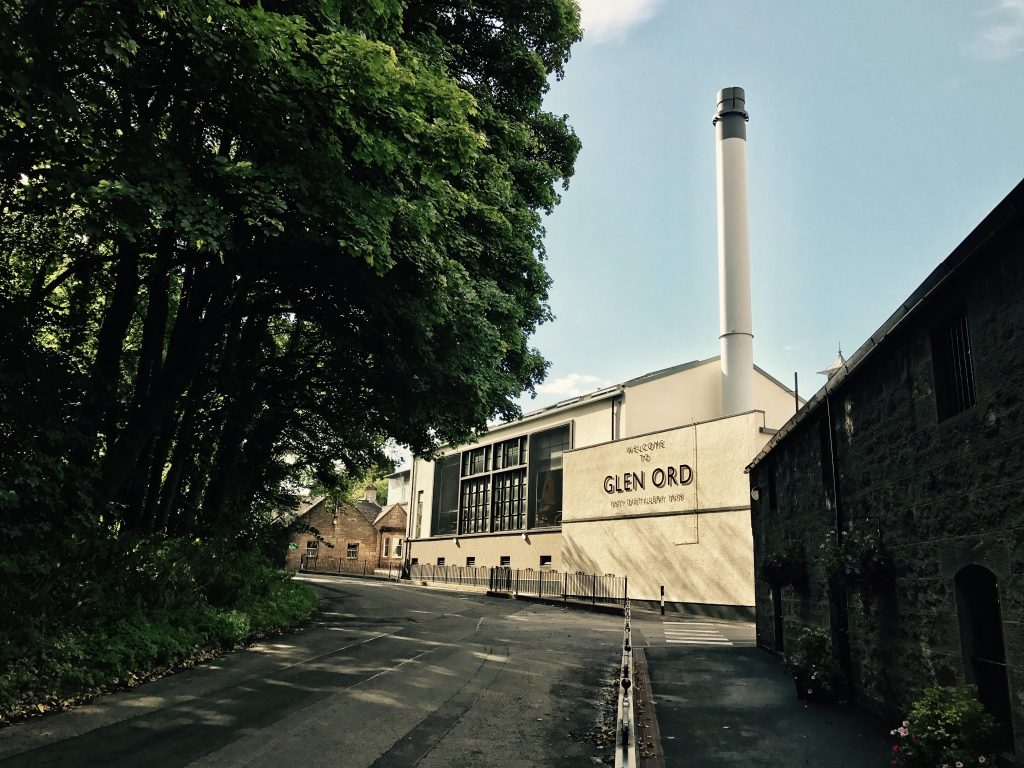 We at The Aye Life headquarters are becoming increasingly partial to a distillery. Many people say that once you’ve seen one, you’ve seen then all. I couldn’t agree less, each distillery has it’s own little quirks and even better, it’s own tastes. It works out quite well for me because Scott is the designated driver therefore all his tastings come home with him. I am free to taste away. Scott puts up with me on the way home so he gets a well deserved dram when he arrives home. 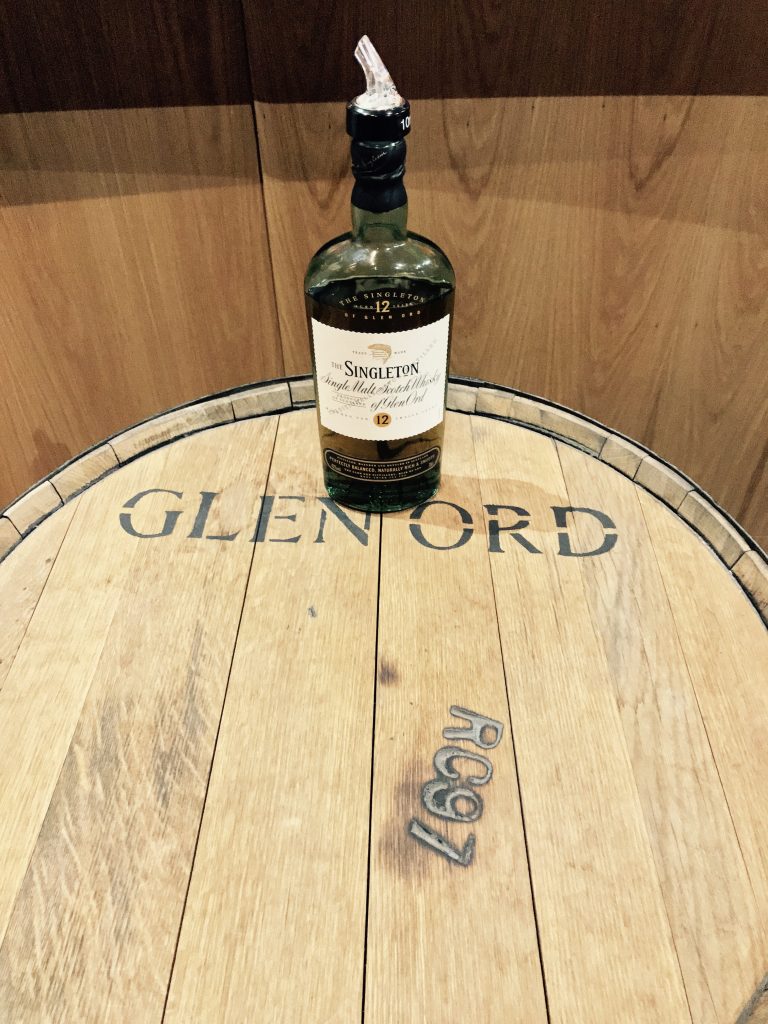 Since all the whisky made here goes to Asia, here are the 12 and 18 year old European variants distilled in Dufftown, and an amazing 38 year old bottle from the Glendullan distillery.

We would like to say a huge thank you to VisitScotland and ASVA as we used our pass to get a really good discount at Glen Ord Distillery. This resulted in a great tour and an even better birthday afternoon. As always, all opinions are interesting, sometimes funny and always very relevant.