During our media trip in New Orleans, we attended the worlds largest cocktail festival. It is called Tales of the Cocktail and it is the complete opposite of pointless. We spent the best part of a week Uber’ing, which should be a verb, round the cities centre. New Orleans in July is like when you stick a pizza in the oven and heat it at 200, even though the instructed heat is 180. You don’t just cook, you burn! 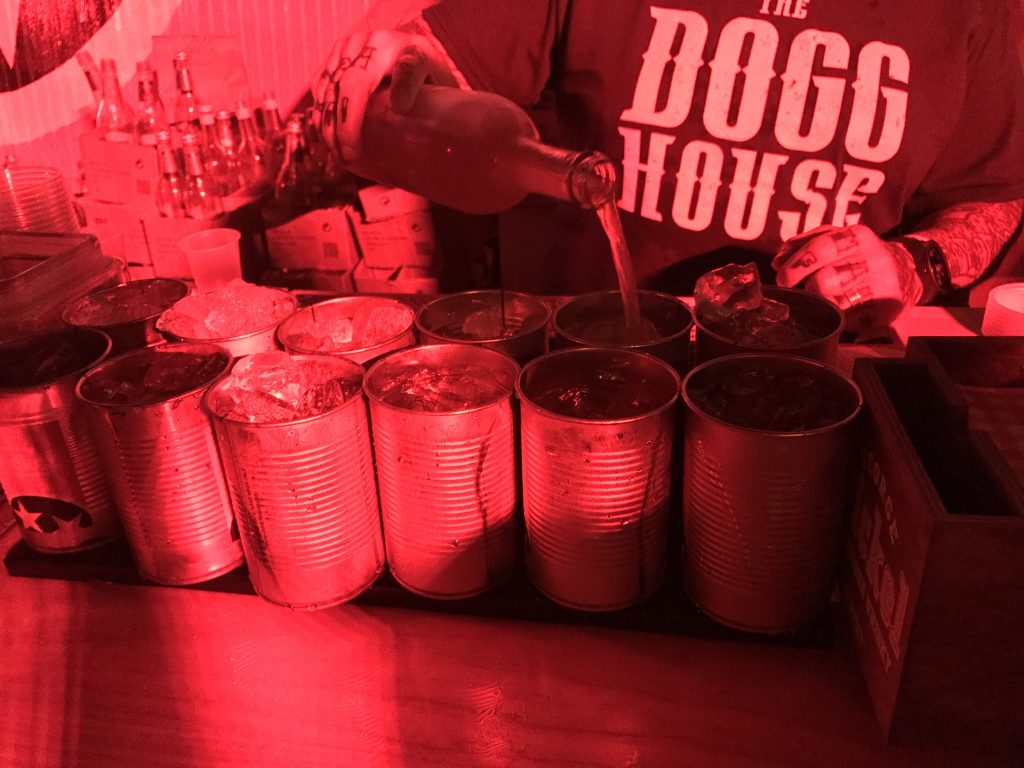 Each brand goes above and beyond to show off, gain media and celebrate the famous jumbled beverage. Beyond the tasting rooms, seminars and interviews come the evening soirées, each more extravagant than the last. Diageo is a British Multi-national company with its head office in London on a former Guinness brewery property and is one of the largest distillers in the world, alongside China’s Kweichow Moutai. 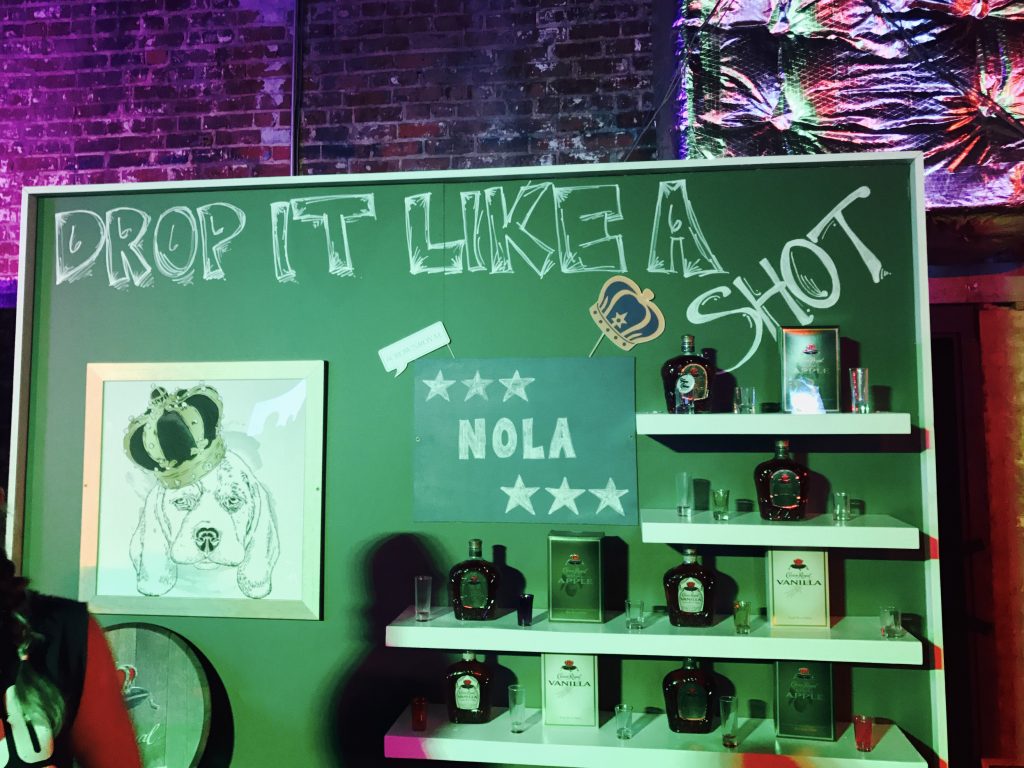 Some of their more famous brands include Smirnoff Vodka and Guinness, along with Tanqueray, Baileys and Captain Morgan. Although to be quite fair, those are just some of our favourites. You can check out more from the drink giants range here.

A Long and Winding Road

We waited on a long and winding road for at least an hour before gaining entry to the ‘Invite Only’ party. I am convinced that the PR contact tasked with sending out these invites accidentally hit ‘send to all.’ As we were there as media, it was getting close to crunch time for us to cover the event and I was getting impatient.

Queueing at these kind of events, in normality would have been totally fine. Unfortunately however, it was around 38 degrees outside and degrees had brought their friends from that band humidity. Being Scottish and trying to breath was becoming more of a mission as the queue went on. Thankfully, when we got near the front, a man in a cowboy hat put me out of my misery when he returned with bottles of icy cool water for us both. Whoever you are, we owe you. 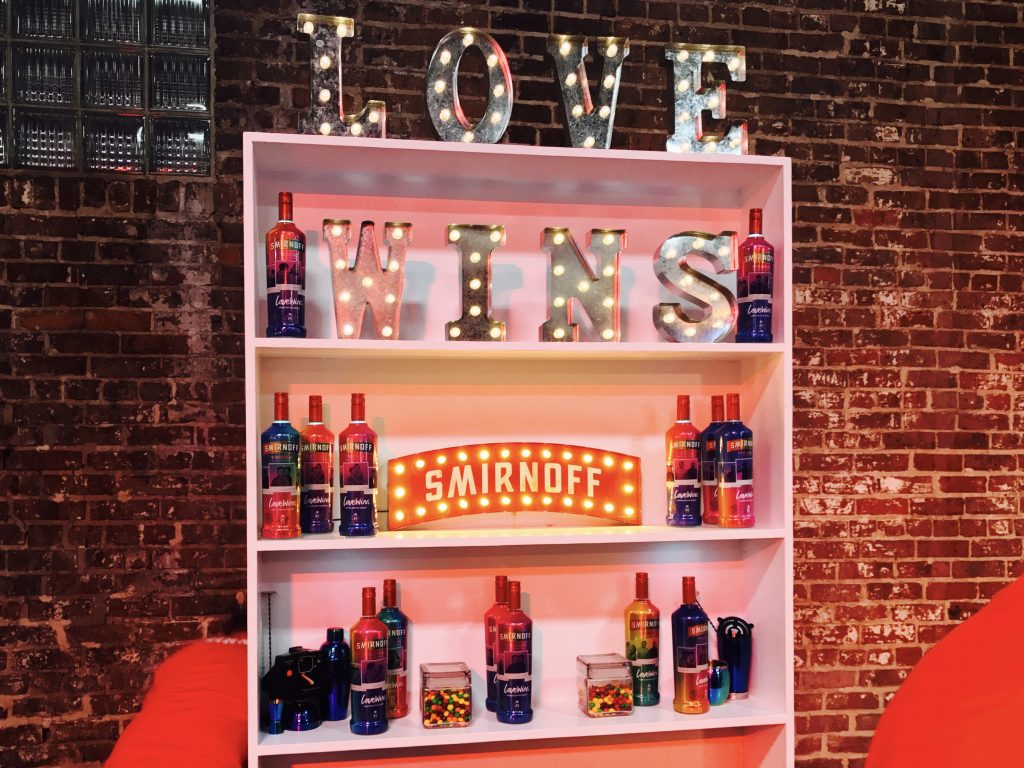 Well, not quite as that would be completely against our social responsibility… However, I am pretty sure I seen Will Power at the party and he definitely kept me going. After vacating the death queue outside, being met with a functioning air con was a blessing sent from the angels. Unfortunately somebody had not been lucky enough to hang out with Will Power and their dinner was only inches from my heel. This combined with my sobriety and lack of timing to get some decent photos before Snoopy Snoop was again, testing me.

I don’t think I have ever been so happy to see Smirnoff. When we finally reached the Russian vodka van, we were parched and on a time limit. Therefore, yes, we fully admit to picking up more Vodka, Ginger and Limes than really necessary. If not for the vodka, then for the ice. I pressed one cocktail against my chest while I consumed the other in record speed.

The Dogg days are far from over 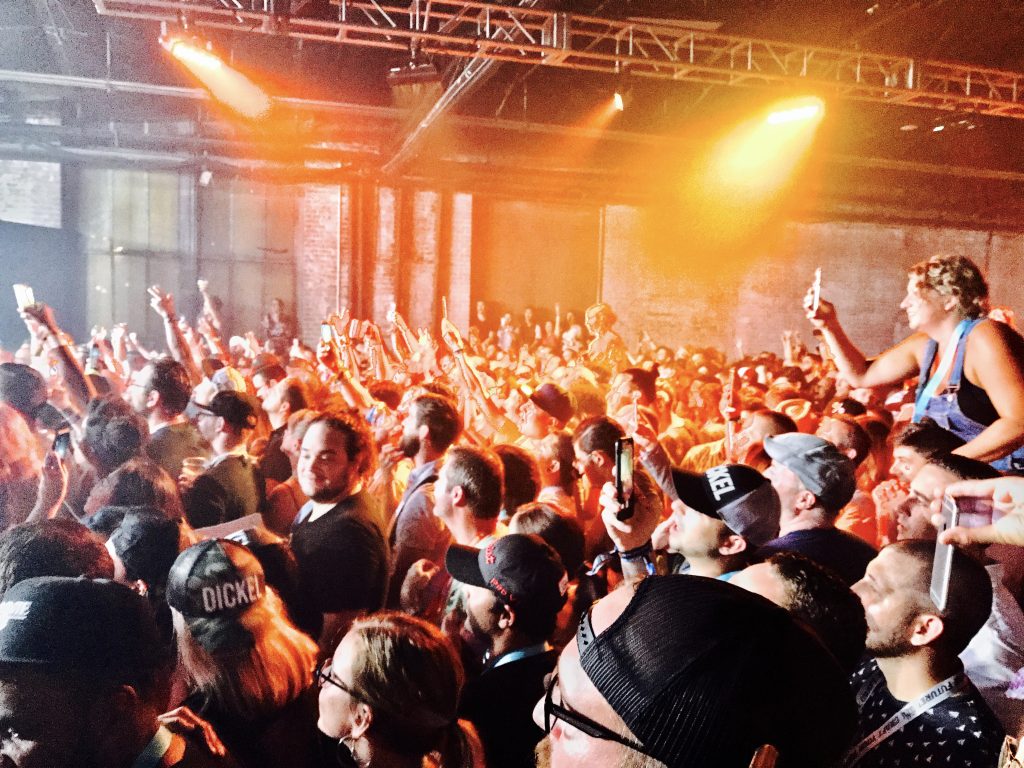 Before long, the music was starting to become more ‘Dogg friendly’ and the atmosphere was lifting. By this point, Scott was deep in to the audience with his phone a metre in the air. The air con had dropped and the heat had increased. I guess this falls down to the age old phrase, ‘If you can’t stand the heat, get back to the Smirnoff truck.’ Due to Snoops arrival growing increasingly closer, I had no time to go cocktail shopping. This concluded in me leaving the audience to grab around 8 of Smirnoffs copper comforts before returning to Scott. At this point, I wasn’t even sorry for pouring a little down my top. It was dark and I was hot.

Diageo Let the Dogg Out 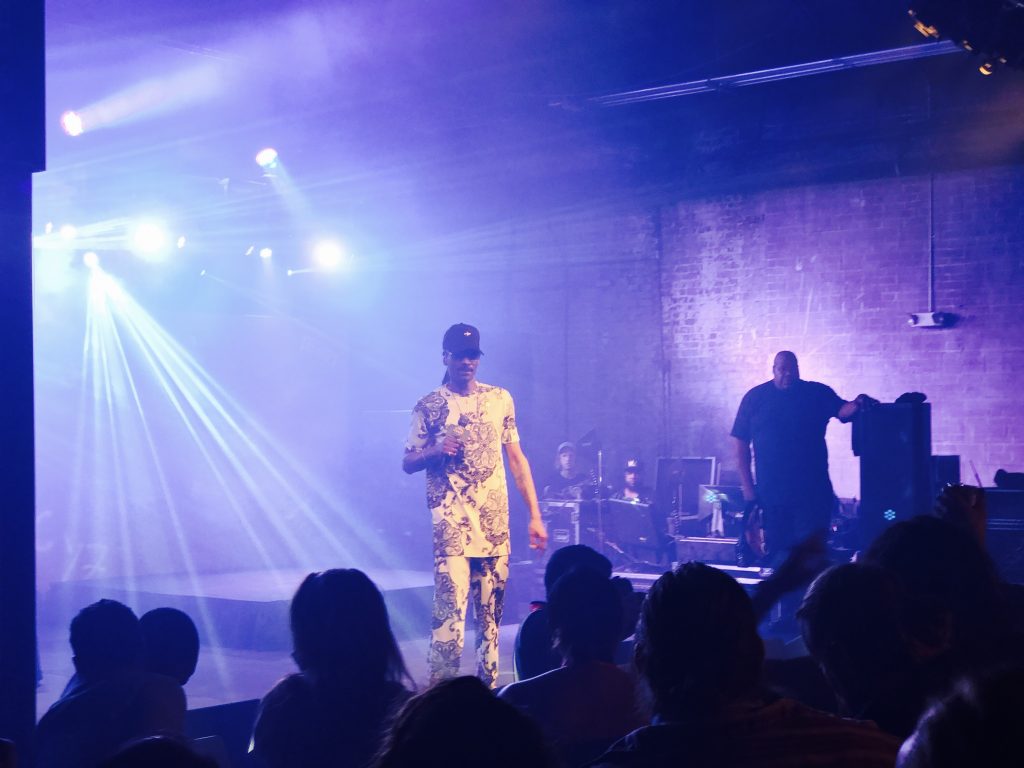 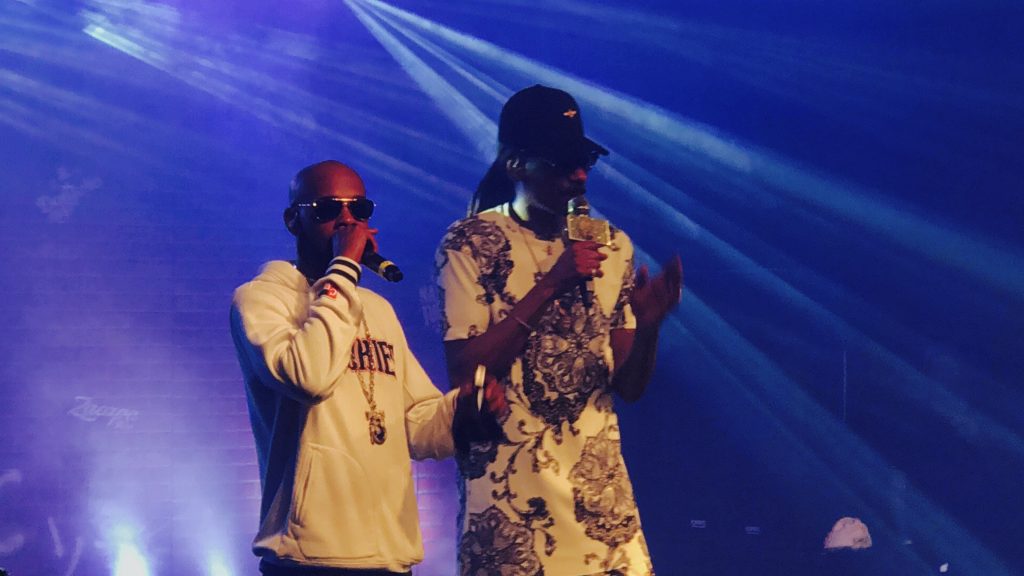 Everything that happened up to this point, including the death queue and the killer heat was gone as fast as the Smirnoff cocktails. Before Tales of the Cocktail, I appreciated Snoop and had definitely dropped a few moves to his tunes. Scott is more of a Van Halen, Kiss and Guns N’ Roses fan. However, little did I know that both I and my metal-head partner in crime would literally become Snoop Doggs number one fans.

On the run up to Tales, we listened to The Next Episode at least twice a day but nothing prepares you for seeing Snoop Dogg in person. He is everything that you would expect and so much more. He hit the stage in an all white get up, carrying a bottle of Tanqueray Gin and a questionable ‘cigarette.’ What a crowd pleaser! The crowd was all over him and he was all over the crowd. My drinks were all over me and my over all temperature dropped. Vodka is great for cooling you down by the way! 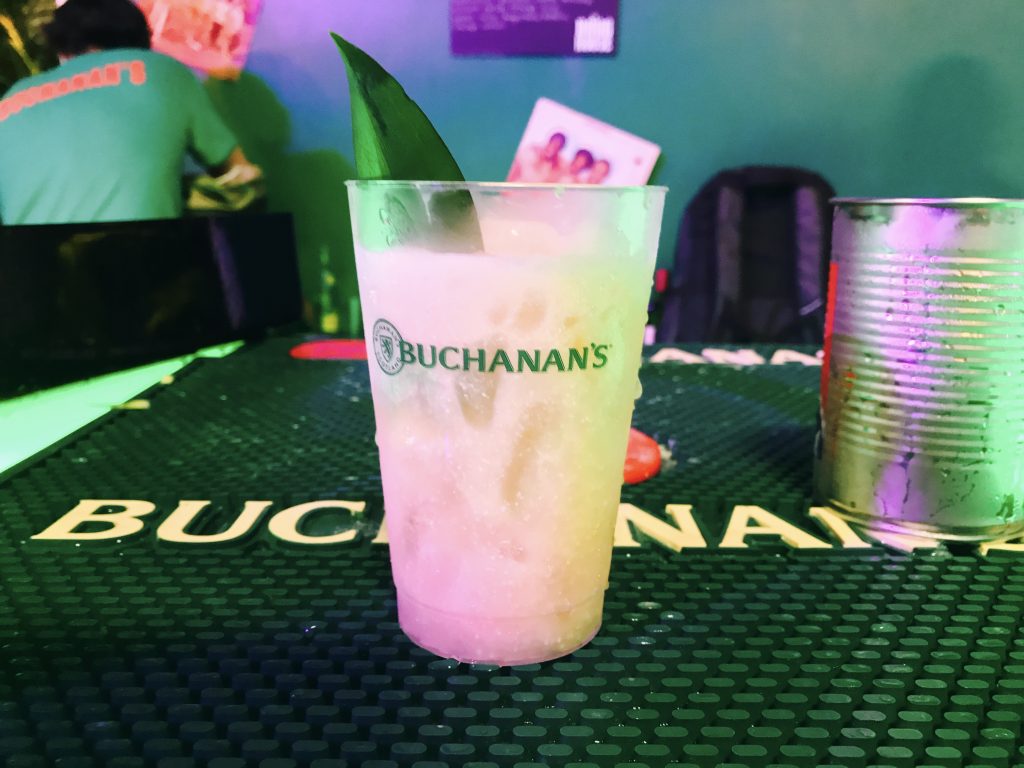 After Snoops ‘Snoop-er’ set, it was announced that there would be hot ‘doggs’ served at the exit doors. Drunk people in America like hot dogs. The stampede became real as people rushed to line their stomachs before the next stop in their party plans. This gave Scott and I our chance to finally get round the other booze brands for a nosy at all the different cocktails. The Guinness bar was still packed at this point but Scott was delighted to get to the front of the Bulleit Bourbon bar. I swear he smiled more than when we got engaged… We took some photos of the different cocktails on offer at The Dogg House to give any enthusiasts reading some recipe ideas. After a fistful of freebies and a great night, we grabbed a cab and went back to The Ritz. 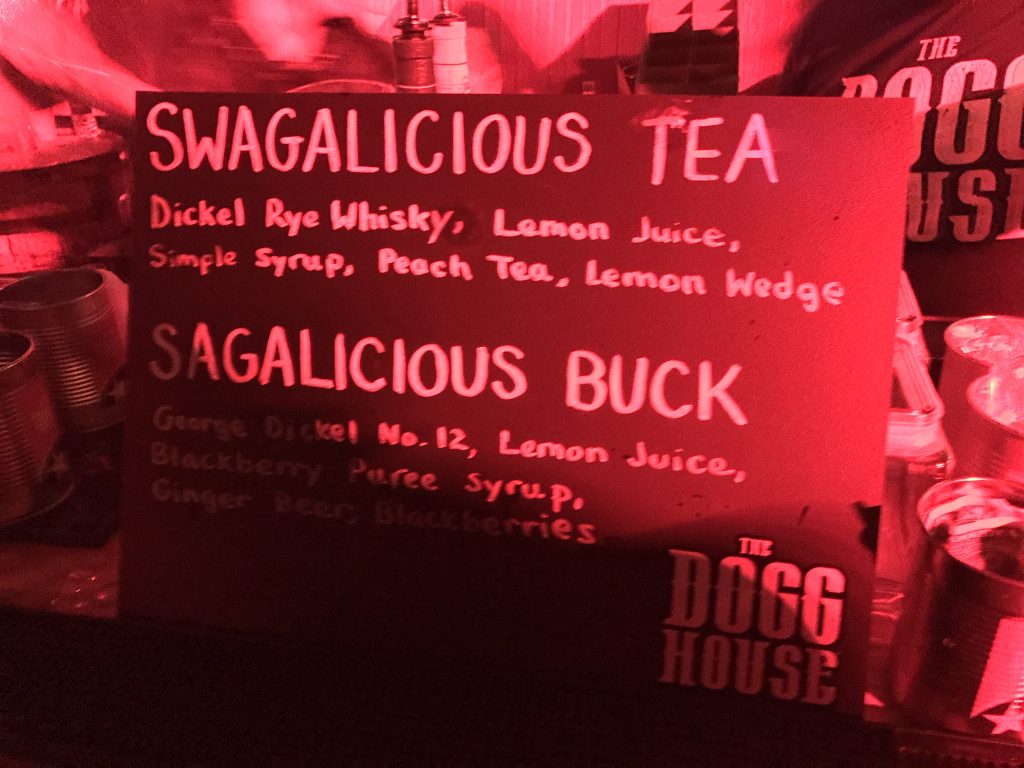 We would like to thank Diageo, the man in the cowboy hat, Snoop Dogg and Tales of the Cocktail for an epic night. As we held media credentials, we received invitations to some pretty special parties. This also included complimentary cocktails. This party came at no cost to us, however as usual my opinions are relevant, sometimes funny and all mine!