So a Scotsman Walks into a Hotel…

He leaves his MINI countryman with a loch-side view, only the best for his motor. He takes the hand of his beautiful and incredibly-intelligent lady friend, Victoria who is weary from her days travels. It shows in her appearance, she resembles a wild crow. He leads her out of the riotous rain, through the ancient doors of the Four Seasons Hotel and into the heated embrace of the hotel reception. She is curious and excited. He is laid-back and nonchalant, giving nothing away. They are met by a cheery young lady (she will thank me for that) who extends a welcome, much warmer than the wild Scottish elements. Her name is Susan and she is the enthused innkeeper. 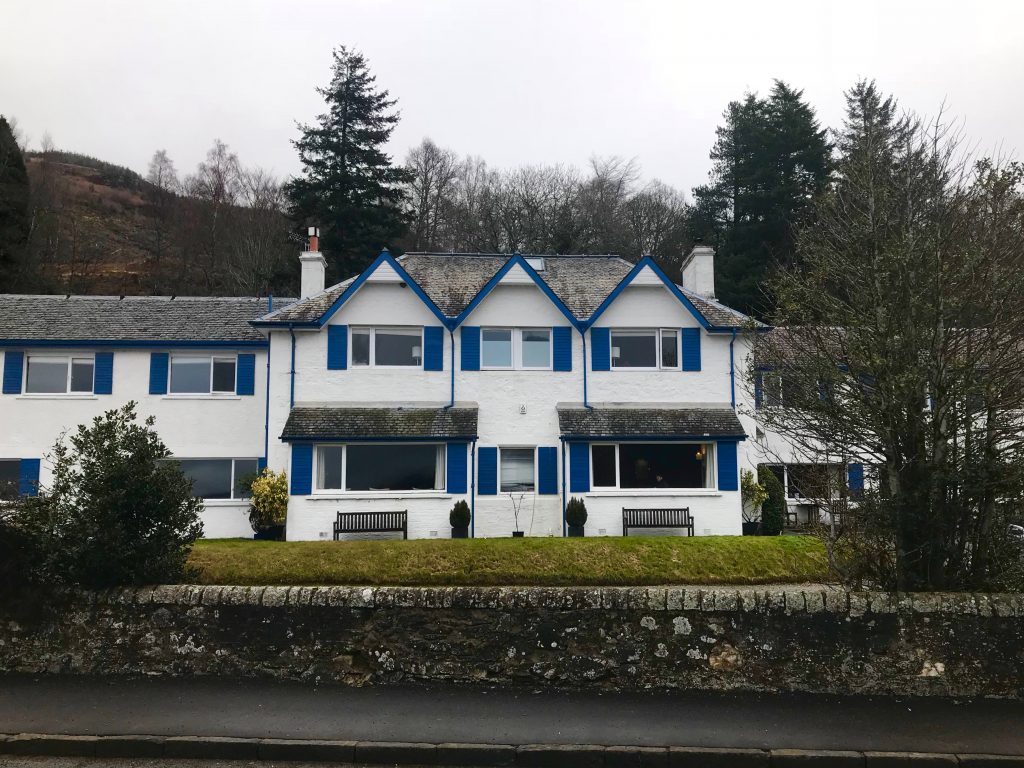 Susan is personable, pretty and polite, not completely unlike her hotel. She hands a key to the young, bearded gentleman who is relieved at the thought of dumping his luggage. Victoria follows behind, trying not to fall over her big feet as she takes in her traditional, yet unfamiliar surroundings.

They had expected fine views. The road which led them to the hotel hinted heavily at that. However, they were also aware of the raging rain and fearless fog which draped across the Scottish skies. In this, they expected faded views from the bedroom window. Instead, Loch Earn beckons their eyes whilst thrashing her waters angrily against her tall, majestic banks. Both Scott and Victoria are mystified by the almost threatening scenery. 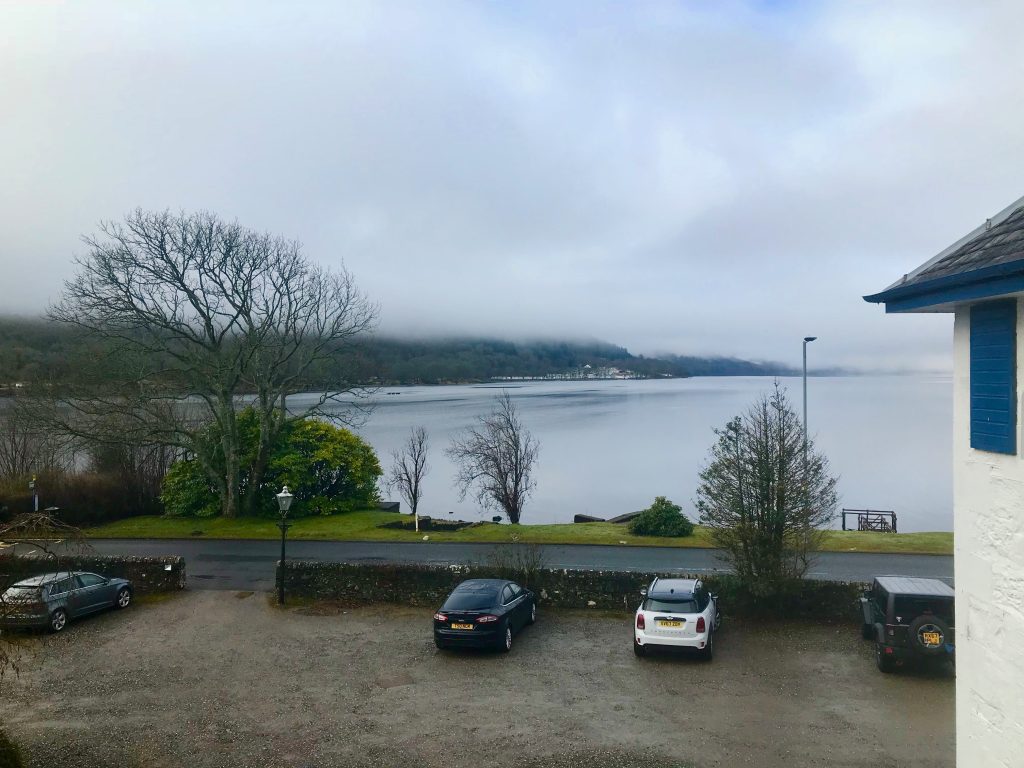 Victoria drops her bags before removing her sodden leggings and changing temporarily into her nightwear. She looks by no means attractive but is left feeling warm and comfortable. Scott is happy to relax, still giving nothing away. The room is spacious and is designed in such a way that it makes the already spectacular view, pop.

The couple gnaw merrily on oreos and Swedish meatballs from Crieff whilst dreaming of the evenings cuisine.

Their stomachs growled as they sauntered down the staircase, eyes fully on the prize. Their dinner booking was at 7pm and they were early. Victoria, a typical Highlander, was thirsty for nout but gin and did not hasten in leading Scott to the bar. He ordered a pint of pale ale which he consumed in little to no time. In Scotland, it is common for the pre-starter to be one of alcoholic tendency. 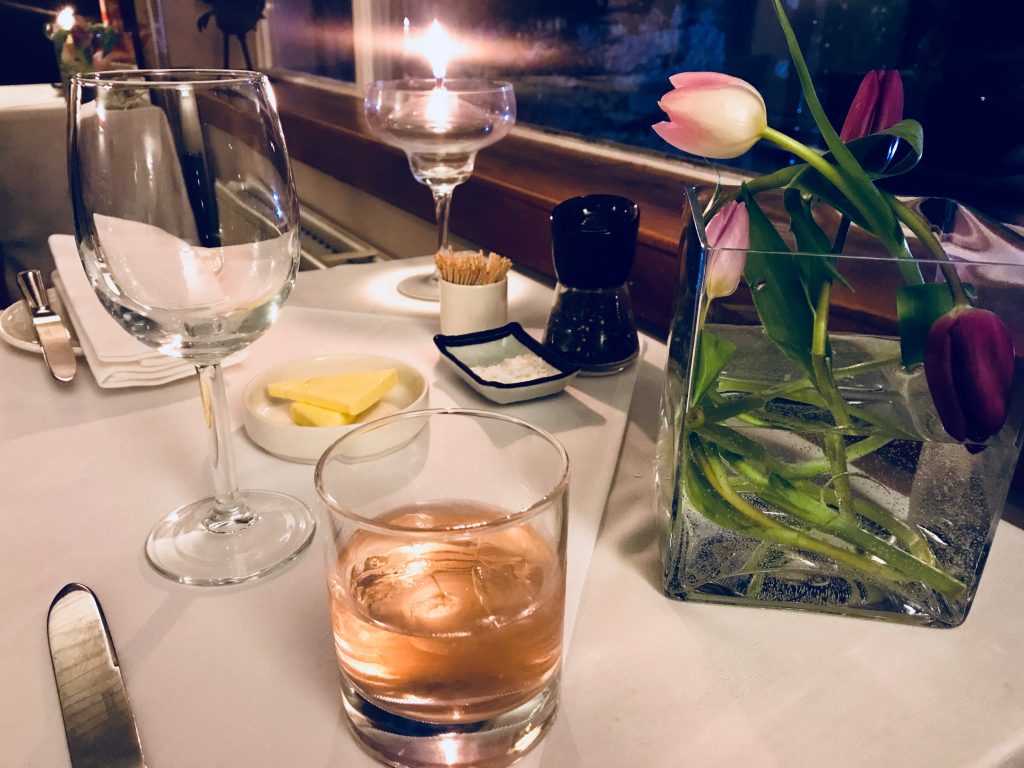 They were greeted by a friendly, personality-packed waitress who looked very much the part. She led the hungry couple to a candle-lit table by the window. Unfortunately, Winter still had her grip and thus left the outstanding view in darkness.

As they scoured through the enticing menu, it soon became evident that the wandering couple were in for a delicious meal. Scott had spent most of the weekend snapping up Scottish sea-life like some sort of starved kraken. He centred his dining decisions on a similar theme. 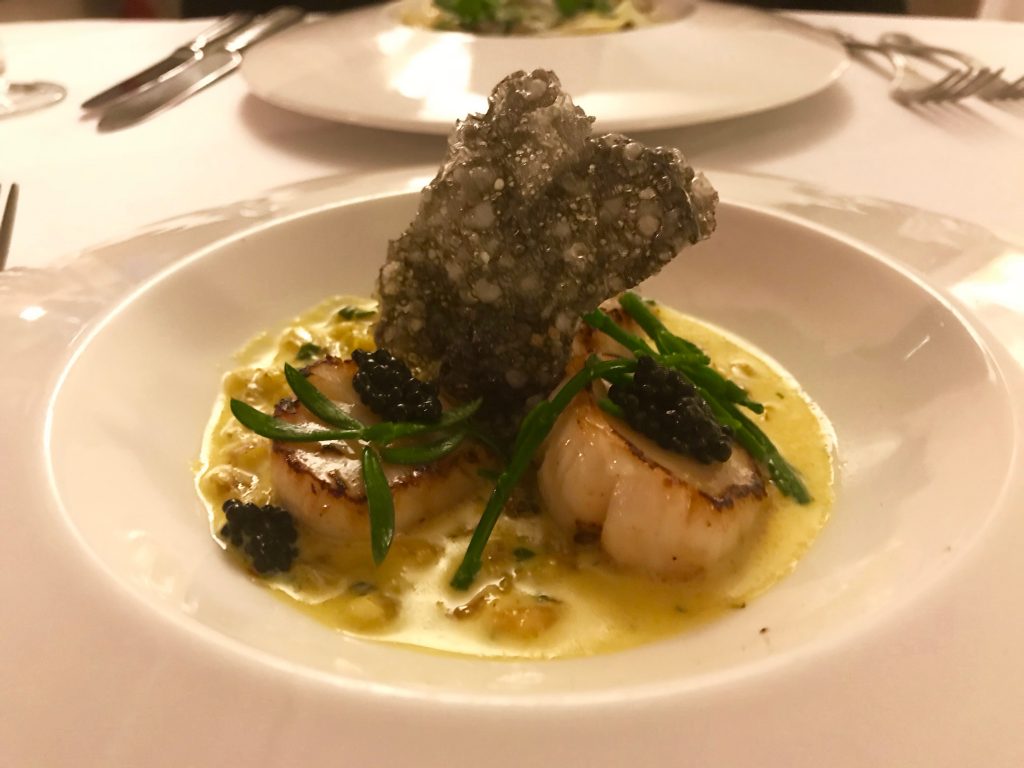 Whilst Victoria stayed a little more familiar with a wild mushroom and ricotta ravioli. Going by the extra bread she requested for dipping, she was a solid fan.

The main course brought with it further culinary delights. For Scott, it was more fish. A seafood linguine to be precise with West Coast Scottish mussels, king prawns, sea trout and haddock with a Vermouth Cream velouté, capers and samphire. 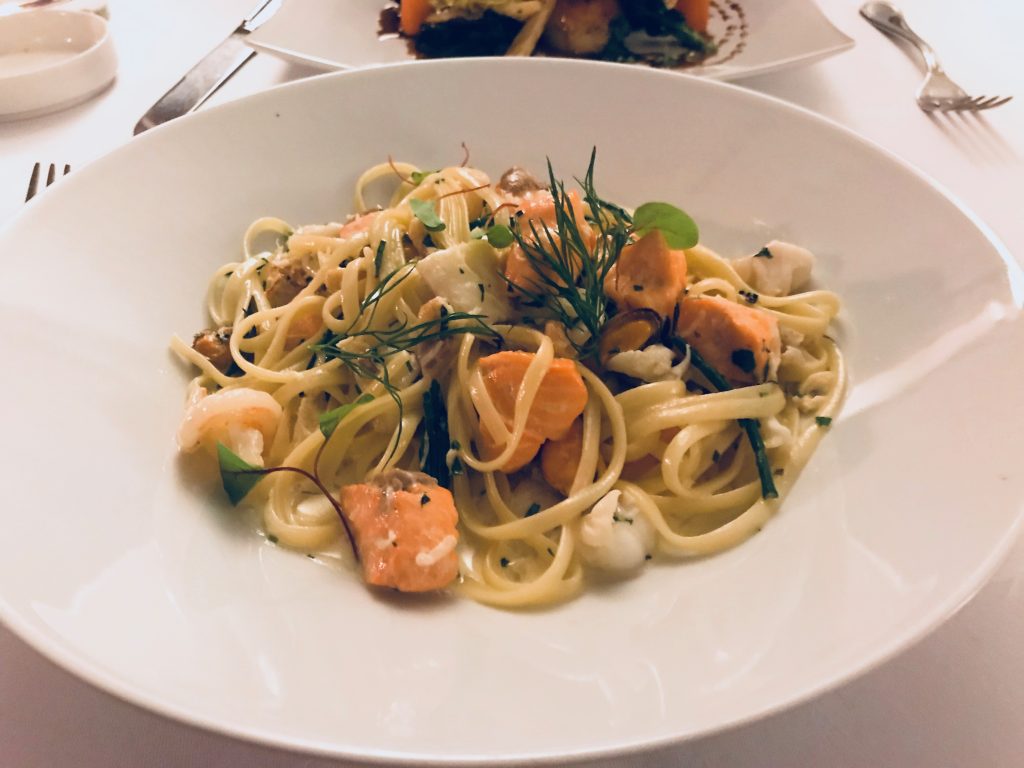 More ingredients than you could shake a Masterchef at. For Victoria, she lapped up the pan roasted chicken which arrived with potato fondant, leek fondue, salsify, purple sprouting broccoli and a tarragon Jus. 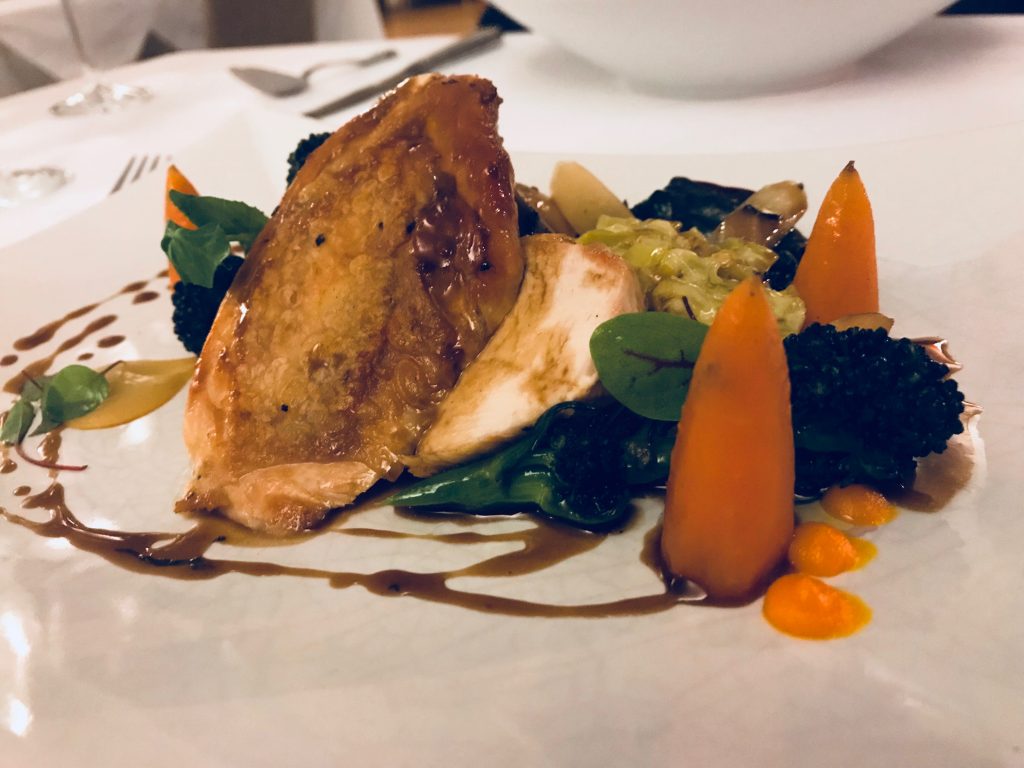 For the second night in a row, Victoria packed her little Scottish cheeks with sticky toffee pudding and ice cream. Scott was a little disappointed that there wasn’t fish in his dessert, in fact he was right trout of his comfort zone. He did however devour a dark chocolate mousse. 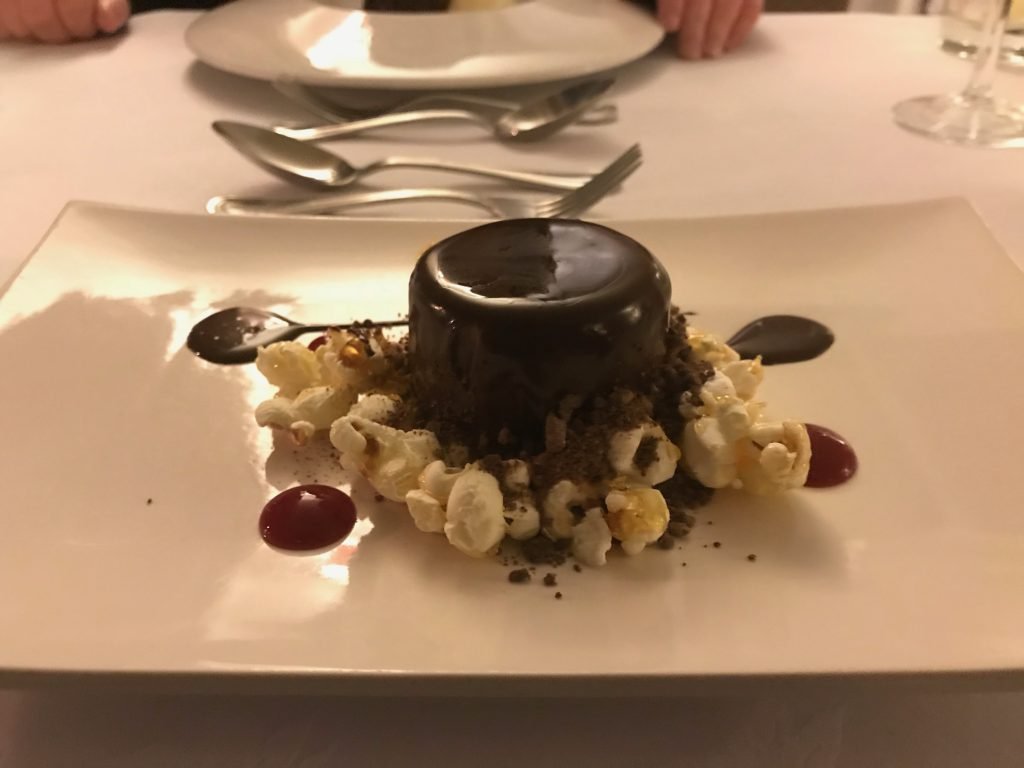 Stuffed to the lungs, the Scottish Supremes turned in early, eager for the mornings alarm.

As is standard in Scotland, the weather had so far wreaked havoc on their romantic weekend. Due to this, they had not expected to wake up to persistent rays of sunshine peeking through an atmospheric mist. Complaints could not be heard. Following an eerie wander by the banks of Loch Earn, they made their way to the breakfast table where they were greeted by epic eggs, bacon bliss and more fish for Scott. Salmon, to be specific. 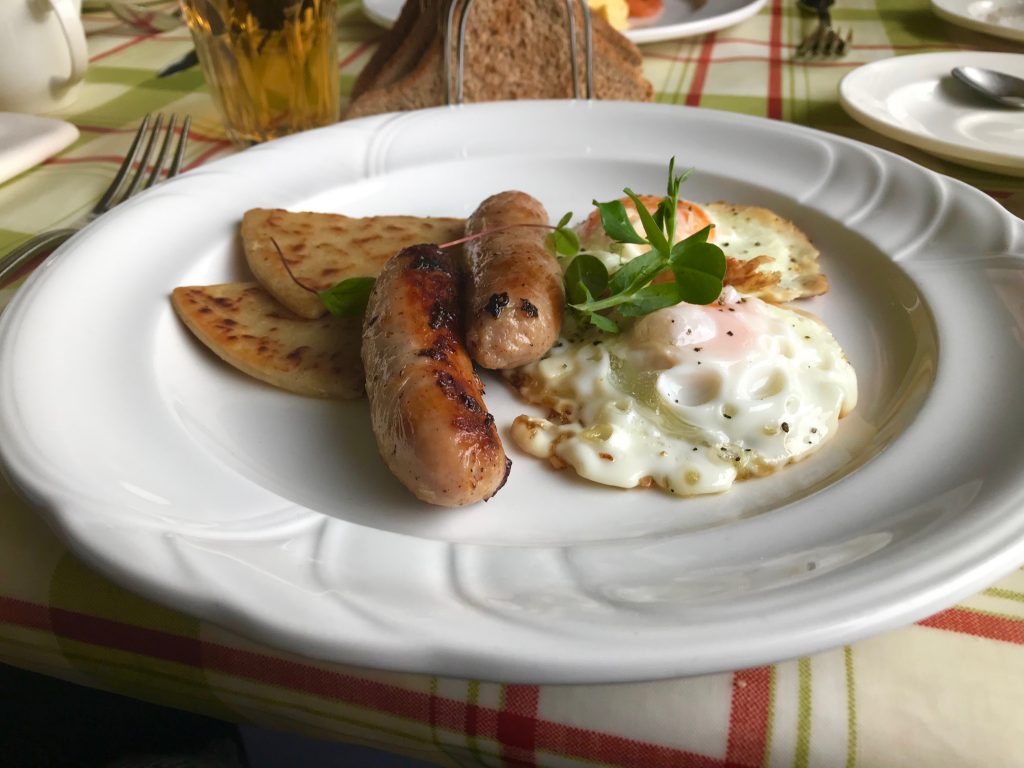 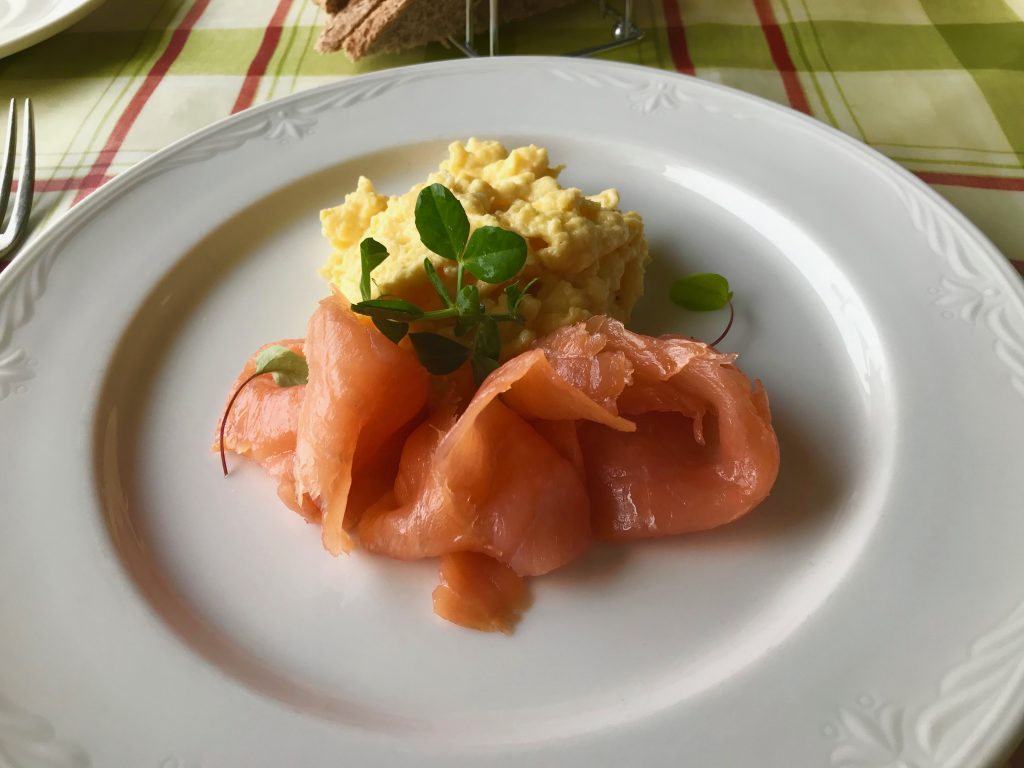 Susan, the cheery and delightful hotel owner was floating around like a multi-tasking octopus before Victoria cornered her for a chit chat. Susan spoke of her exciting plans and achievements to date whilst touring the clumsy blogger around. She took over the Four Seasons Hotel St Fillans in July of 2017 and has made almost unbelievable changes to the hotel in her short time there.

Other than the sleeping quarters, Victoria and Scott had only really spent time in the hotel bar and the tasty Meall Reamhar Restaurant. This was their chance to take in the more casual and woof-friendly Tarken Restaurant and Bar. 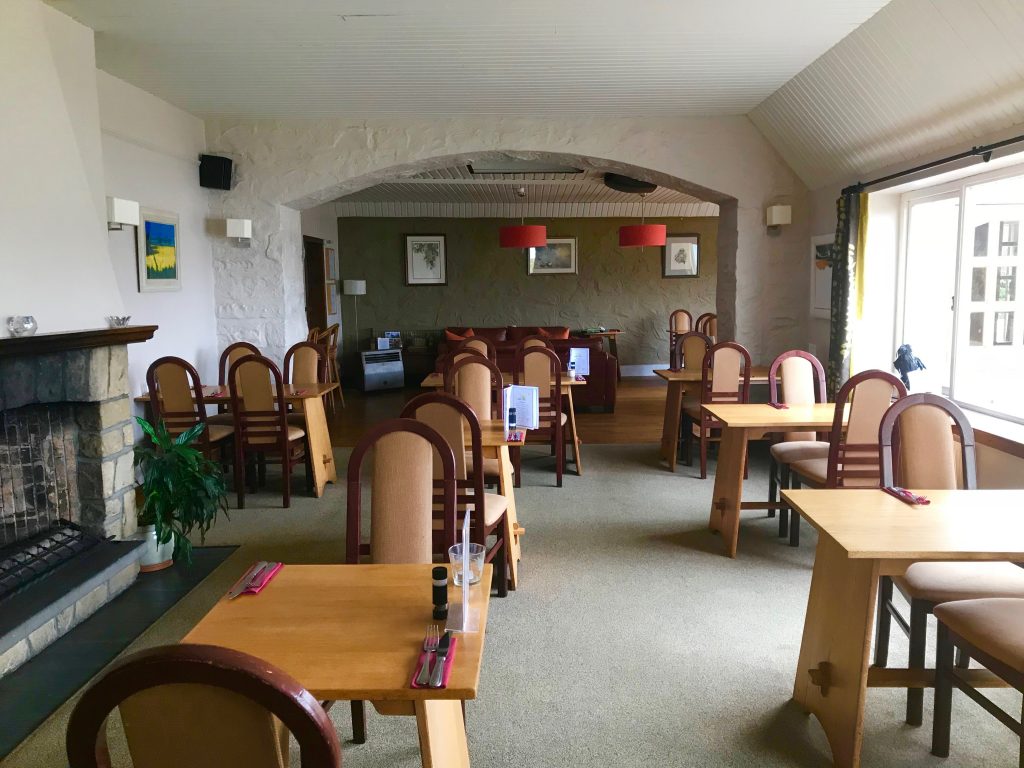 The Four Seasons Hotel is very much a dog-friendly place. The travelling twosome had left their pup Callie in Aberdonia with her granny and have kept this very quiet since. Callie sees herself as the chief blogger and would hold this against them. They did however meet one of the part-time hotel receptionists, a bouncy black lab named Finn. 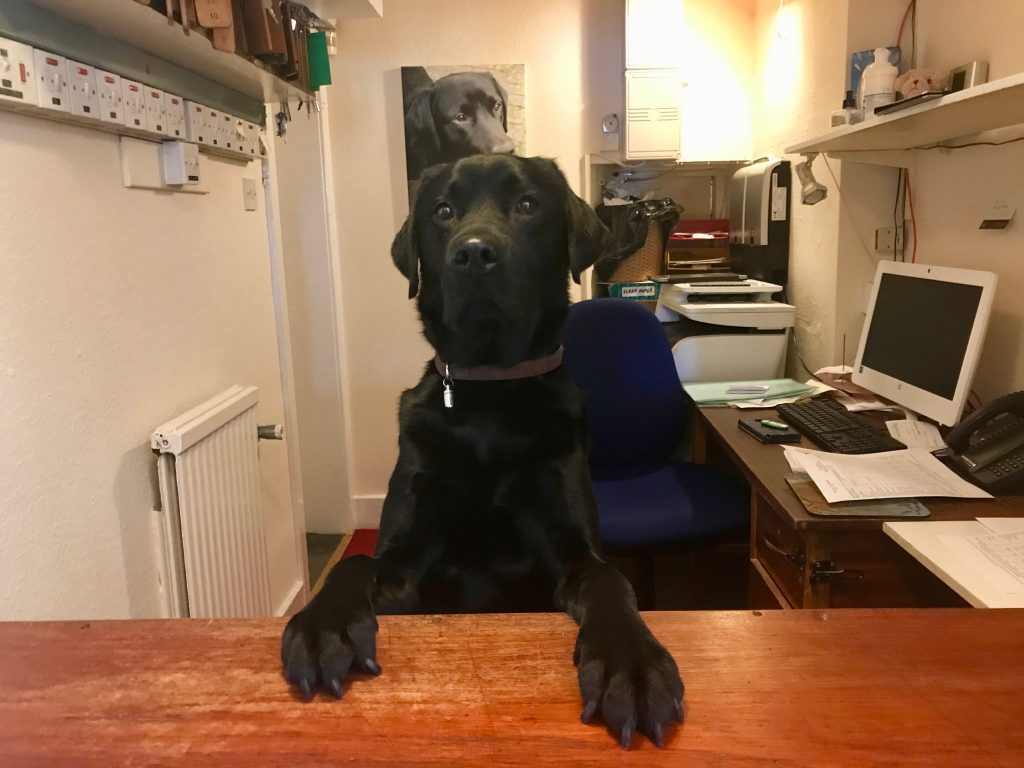 Wood you let them see the Chalets?

Other than being a huge, romantic, peaceful abode amongst nature, there are also a number of chalets eloquently tippled behind the main building. This was also where Victoria hinted heavilly and consistently for a return trip. She continues to do this to this very day…

Did they (Loch) Earn their stay? 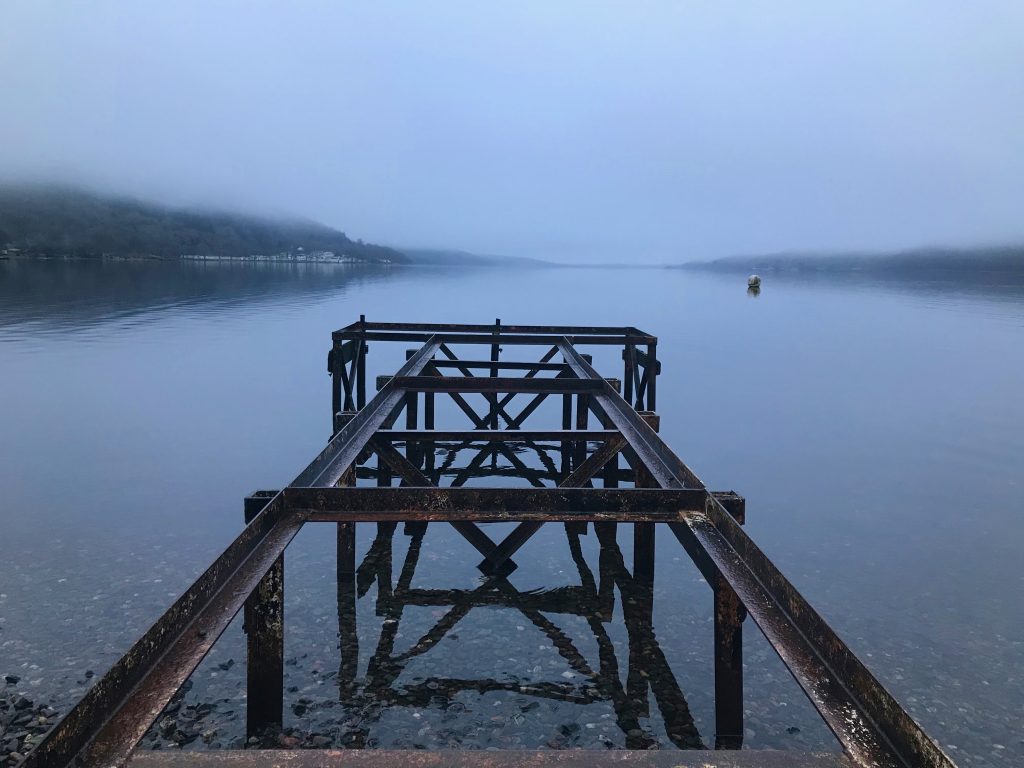 They did, they really did. They work so hard, sometimes they just need a break, you know? So where’s best to go when you want to escape it all, cut back on phone time and eat like a goddess? You go to The Four Seasons Hotel in St Fillans.

To travel is to live