Urquhart Castle History and my various stages of emotion

Firstly, I didn’t even try to make that sound like a Harry Potter title, that just happened because quite frankly, I was born this way. Visiting my Highland home of Inverness and not making the most of the rough and riotous Scottish history is just plain rude. Particularly with all these Outlander fans kicking about. Our restlessness and last minute organisation brought Scott and I teetering round the cities outskirts on the run from the law. Not really, but it is true that we were hunting some quality Scottish folklore after my grannies questionable stories weren’t quite fitting the bill. 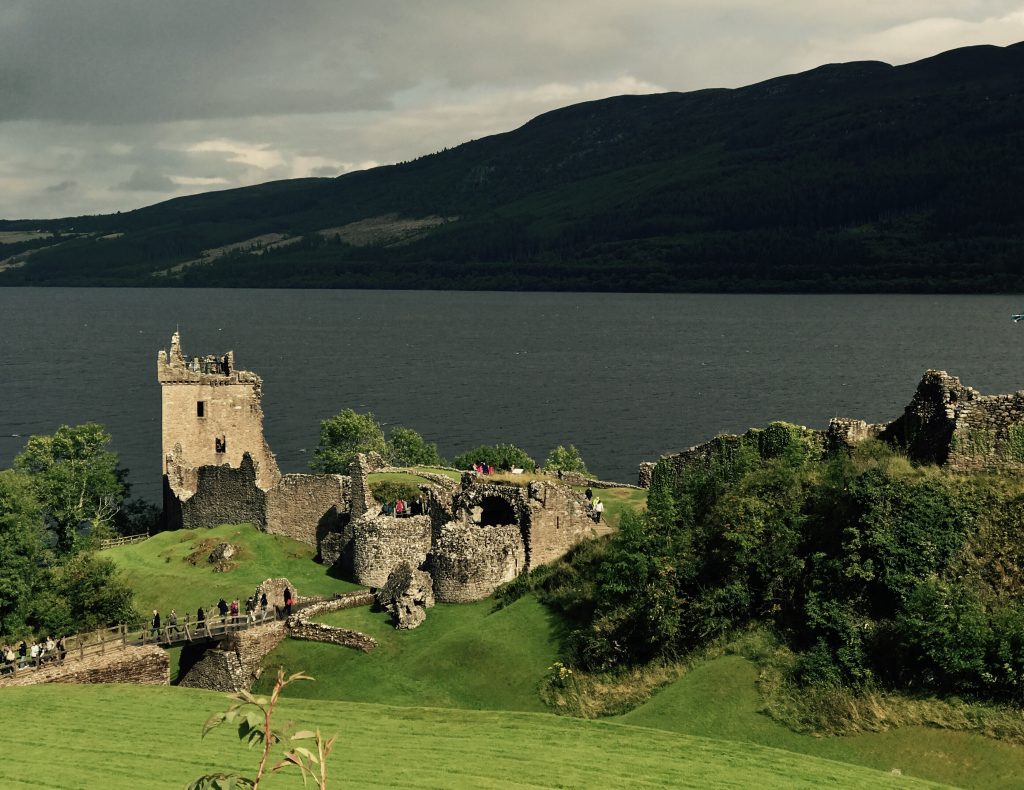 Having grown up in the area, Loch Ness was as normal to me as a peanut butter and jelly sandwich is to an American. Some people may find it intriguing but others are brought up squeezing through endless queues of tourists on Inverness High Street. Or at least that used to be my attitude until I stopped tequila Wednesdays (sort of) and showed an interest.

What’s grey and can’t swim? A castle. And me in the Summer.

Urquhart Castle – by Fire and Sword 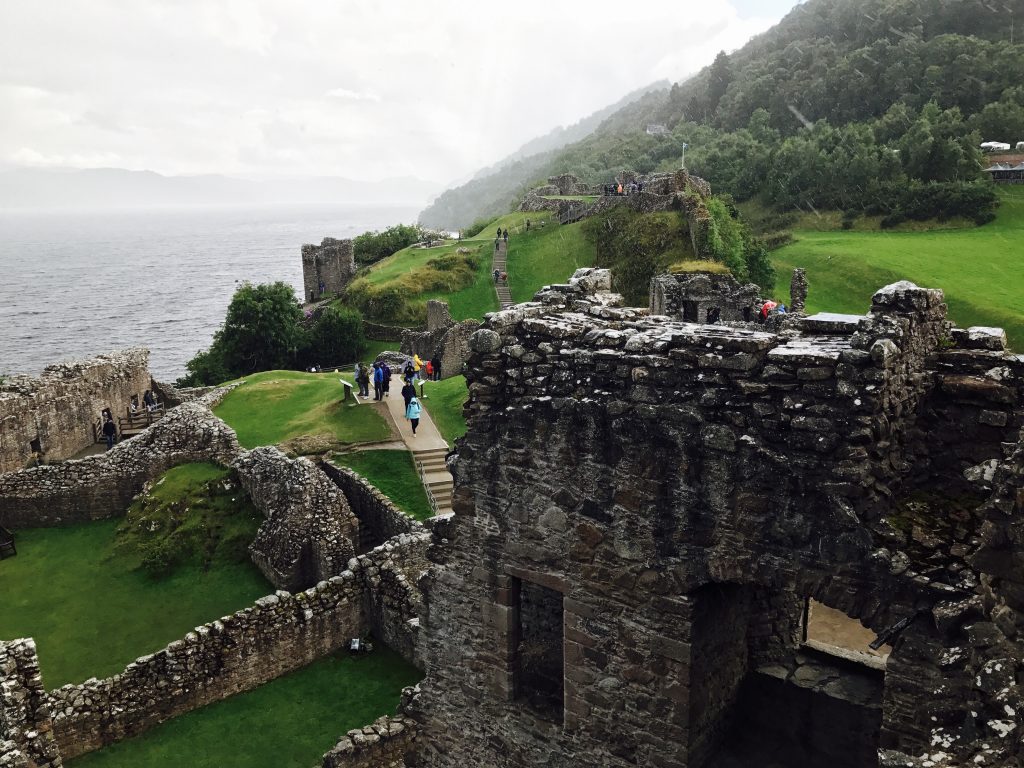 We arrived at a very busy car park, loaded with tourists from far and wide. Ian attended to us at the reception desk with a big smile and an answer to all of our questions. It turns out that we arrived at the same time as a cruise ship which with luck like mine, is par for the course. However, this is a beneficial thing for Urquhart Castle so we were prepared for queues and accents for days. We expected to wait ages to see the special Historic Scotland film shown before entry in to the castle. However, we were pleasantly surprised by our epic timing. We were even more surprised at the request from a Canadian woman for English subtitles to the film. Just shows that ‘Och aye the noo’ doesn’t always translate very well…

The film did an exceptional job at taking thousands of years of history at the castle and squeezing it in to an 8 minute summary. It might have been short but it was romantic and as usual, this big patriotic sop was in tears. I wasn’t entirely sure whether it was the general Scottish history that got me or the connection to my clan, the ‘MacDonalds.’ Either way, it was another ‘mascara on chin’ moment.

Saint Columba and his Castle AirBnb 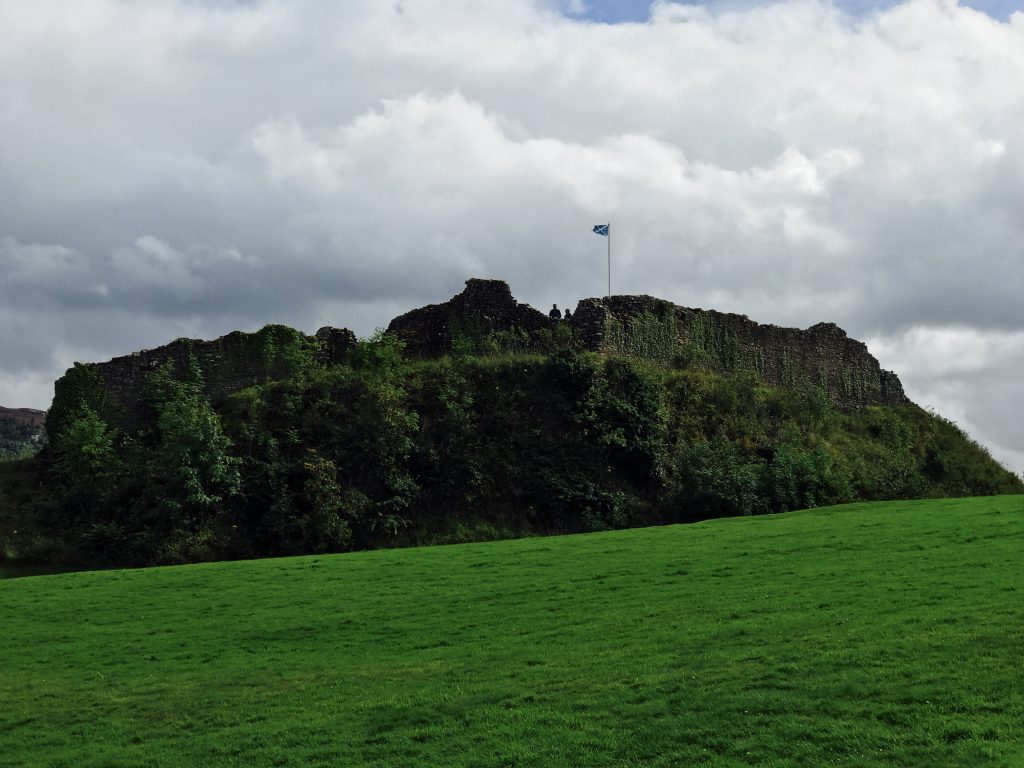 St Columba was an Irish abbot and missionary. As legend says, St Columba apparently kipped at Urquhart Castle on a trip to Scotland. He had travelled to preach Christianity and primarily attempt to convert the Pictish. He achieved his goal when he converted Emchath, a pictish nobleman. His biographer says that St Columba came across a monster in Loch Ness. However, there are a whole host of monsters in the Highlands, just the clever ones don’t get caught out. This is the earliest tale of Urquhart Castle which has potential to be true. Although, there is not much in the way of ‘physical evidence’… Sorry to disappoint! It gets SO much better though…

To be honest, the early history of the castle is very much up for debate. It depends what you want to believe as not much is documented. However, why let the truth get in the way of a good story? Apparently the original castle was there by 1250, where a man named Alan Durward was in residence. He lived a pretty chilled out life, enjoying his pretty magic view and hunting deer and wild boar. Alan met the angels in 1275 probably pretty clueless to the commotion that was soon to kick off. Alexander III granted the castle to John II Comyn, Lord of Badenoch. Nothing is officially documented and history went quiet until 1296.

We want our Castle back

Edward 1 was on one side, the Scottish were on another. Urquhart Castle was in the middle and it was all kicking off. Thus begun the Wars of Scottish Independence. Edward 1 took the castle from the Scottish and appointed Sir William Fitz Warrin as constable to look after the castle for the English. The English found stealing the castle fairly easy, however holding it became increasingly more difficult. Within a year, the Scottish (legends) had taken the Castle back. For fifty years, the Scottish were free. 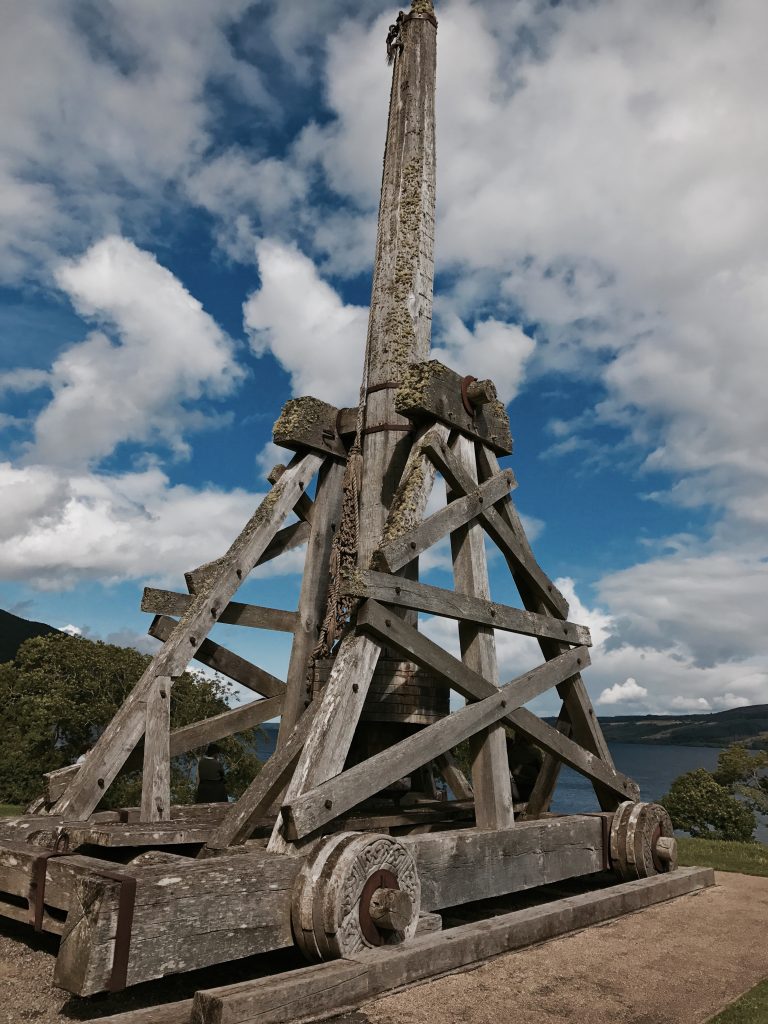 ‘As long as but a hundred of us remain alive, never will we on any conditions be brought under English rule. It is in truth not for glory, nor riches, nor honours, that we are fighting, but for freedom – for that alone, which no honest man gives up but with life itself‘

The Declaration of Arbroath

A time for peace, I swear it’s not too late – The Byrds

In 1395, the MacDonald clan, also known as the ‘Lord of the Isles’ came in to power after frequently raiding the Great Glen. Although they lasted for a fair while (15 years), the rough and ready clansmen were soon out and about looking for a fight. The castle was taken from the MacDonalds (awwww). The MacDonalds started to become a complete pain in the rear to the English Kind Edward IV and he stripped them off their titles. The Castle was given to Sir John Grant and away from the Scottish crown. 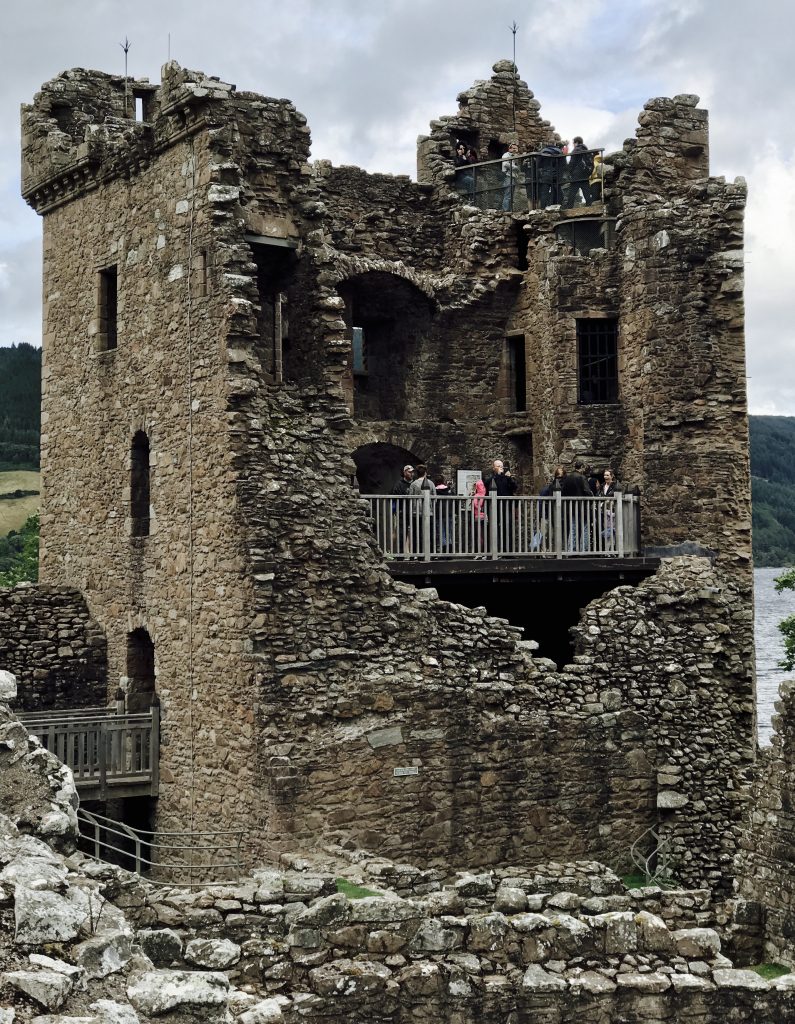 My crazy ancestors continued to kick off when they raided and burned Glen Urquhart and stole over 1000 cattle from the Great Glen. The castle was seized and stripped from value. Furniture, cannons and even the gates were pinched. As a MacDonald, I feel like there are two sides to every sorry… The Lairds of Grant weren’t too pleased when they came back to their castle. There was no way they could bill the damage back to the MacDonalds. Cameron Lands were given to them to try and compensate. 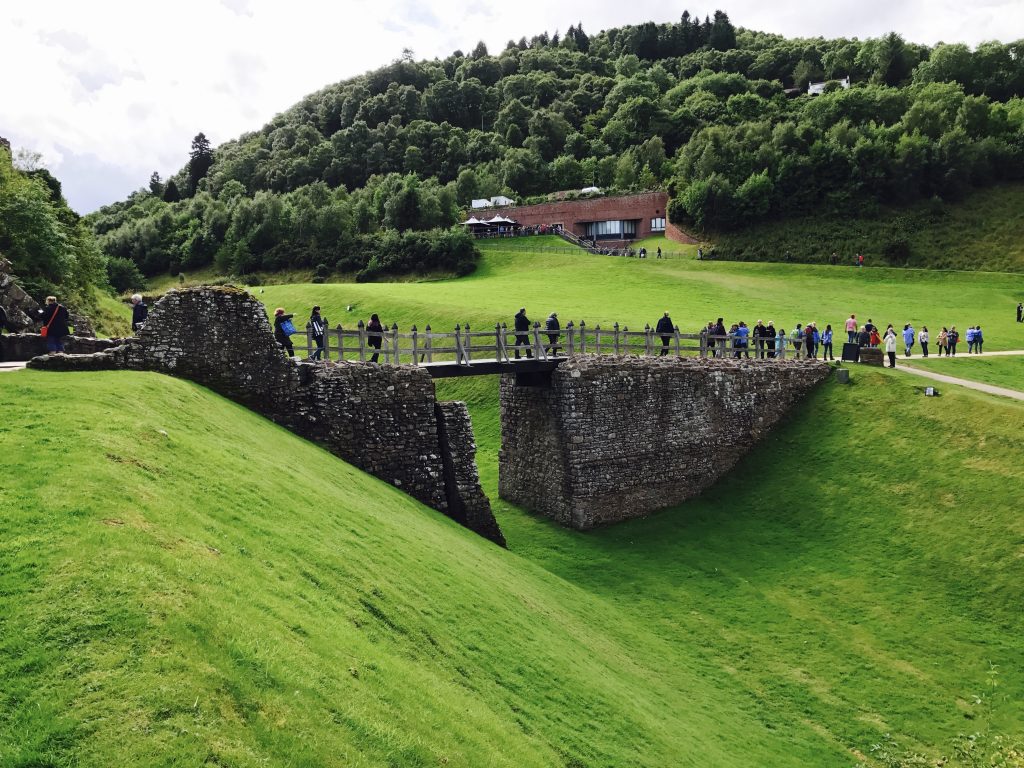 At this point, William of Orange was kicking off and the Grants of Urquhart sided with him. They lined the castle with a garrison of 500 soldiers. The Jacobites who were loyal to the Scottish King, with no fear in their bellies reigned down holy hell on the castle. As if the soldiers within were going to allow the Jacobites to take siege of the castle. So in a final attempt to disrupt the Jacobites, they blew up the gatehouse. The Grant Highlanders marched out for the final time. At this point I was crying, what a pathetic human. 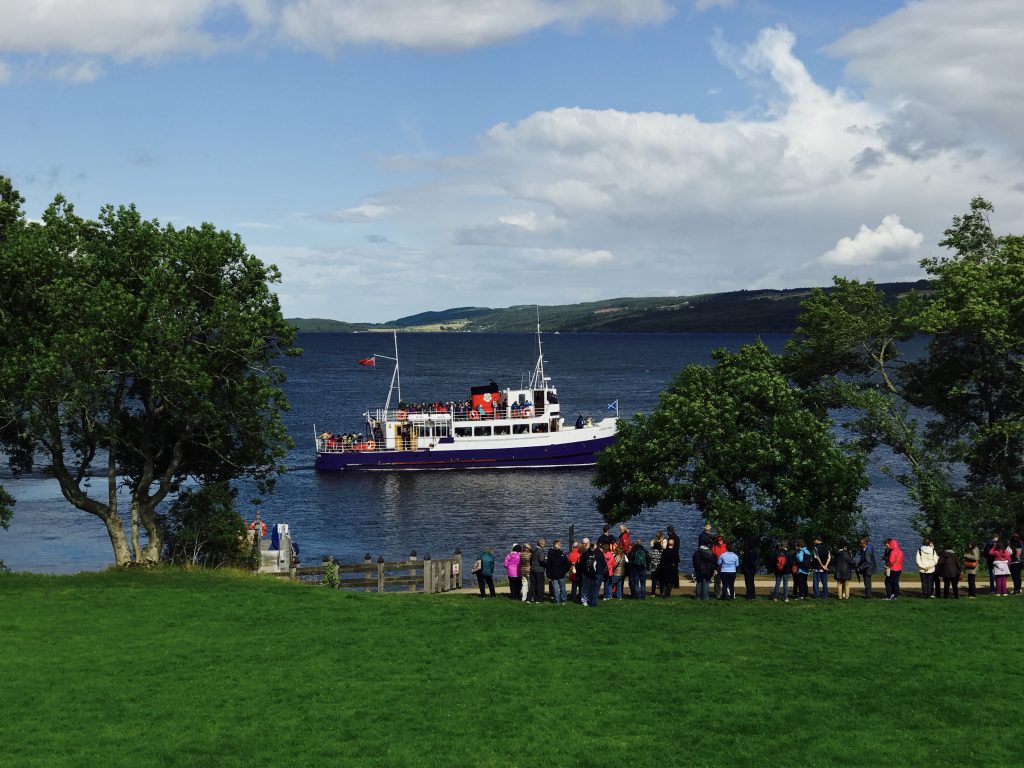 All that in 8 minutes, before we even entered the castle

Pretty impressive stuff, being able to catch all that Urquhart Castle history in 8 minutes. That is what you call a good memory, a sore hand and a tidy iPhone notes app. The tourists watching the film were itching to get in about the castle after being well and truly warmed up. Most of them actually missed the projector screen roll up and the curtains swing open to reveal an outstanding view on to Urquhart Castle. After a moment of admiration, we took to the footpath down to the castle, admiring the stunning views of Urquhart Castle and Loch Ness. As a MacDonald, I didn’t quite raid the place but I certainly understood my ancestors interest in the breath-taking landmark.

We had a spectacular time visiting Urquhart Castle. I love my new found appreciation of the amazing history around my hometown of Inverness. We highly recommend visiting, if not for the history then for the amazing view. The Urquhart Castle gift shop also sells everything from aged whisky to cashmere jumpers. We would like to thank VisitScotland and ASVA for assisting us with complimentary passes in order for us to explore the ancient ruin. As always, my opinions are relevant, sometimes funny and always my own.

For more highland fun, check out our other Inverness posts.