We will T-Roc you

I lurrrrrrrrrve T-Roc and roll… I wanna T-Roc… the puns write themselves. What doesn’t write itself however, is this VW T-Roc review. The forces have been against me putting this together for weeks (I got spoilt with all of the Winter bugs at the end of April and I was RAGIN) but now I’m back with a brand new track, standing here with my everlasting bants.

After a cocktail festival in Edinburgh and a while on the Isle of Skye, we were back in the North East guns ablazin’ ready to pick up our shiny new T-Roc from Specialist Cars Volkswagen Aberdeen for a test drive. I get to call this work, could be worse. We also had a castle-hunting American tourist in tow (long story) who now probably thinks that all Scottish people take 840 photos of their cars at tourist attractions. 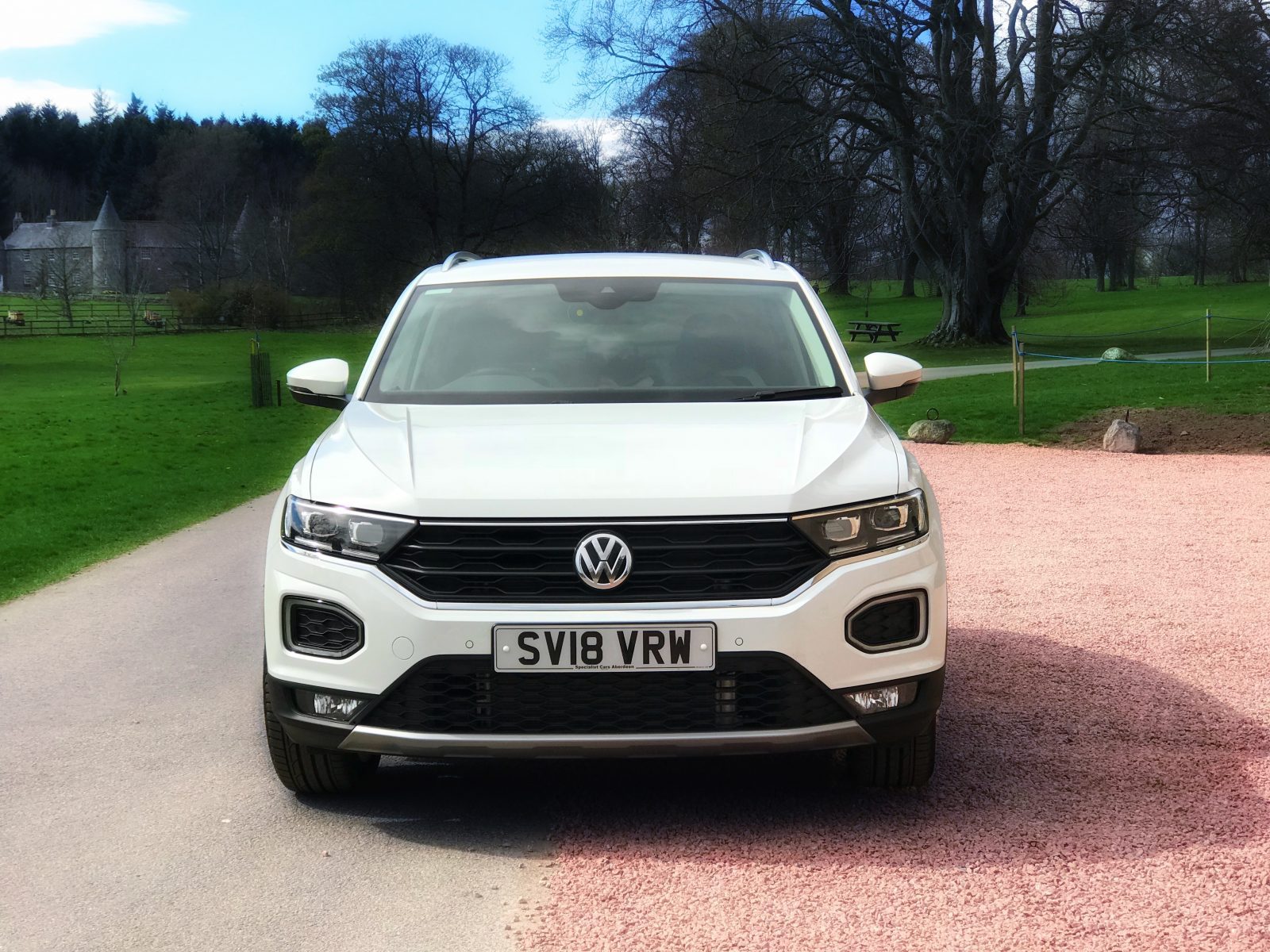 The T-Roc is a brand new crossover from VW. It’s like a propped up, even sexier Golf with style for days and is definitely one of the best looking small SUVs on the market. It hit the showrooms late last year and has gradually been turning up in driveways and Tesco car parks ever since.

Pricing for this baby starts at around £18,000 and increases in price as all the add-ons ‘add up.’ Our Mr T was the top end 2-litre petrol model with 190 horsepower, four-wheel drive and DSG automatic gearbox, starting at £30,000. Not exactly pennies but very fairly priced for such a reliable, stylish car. 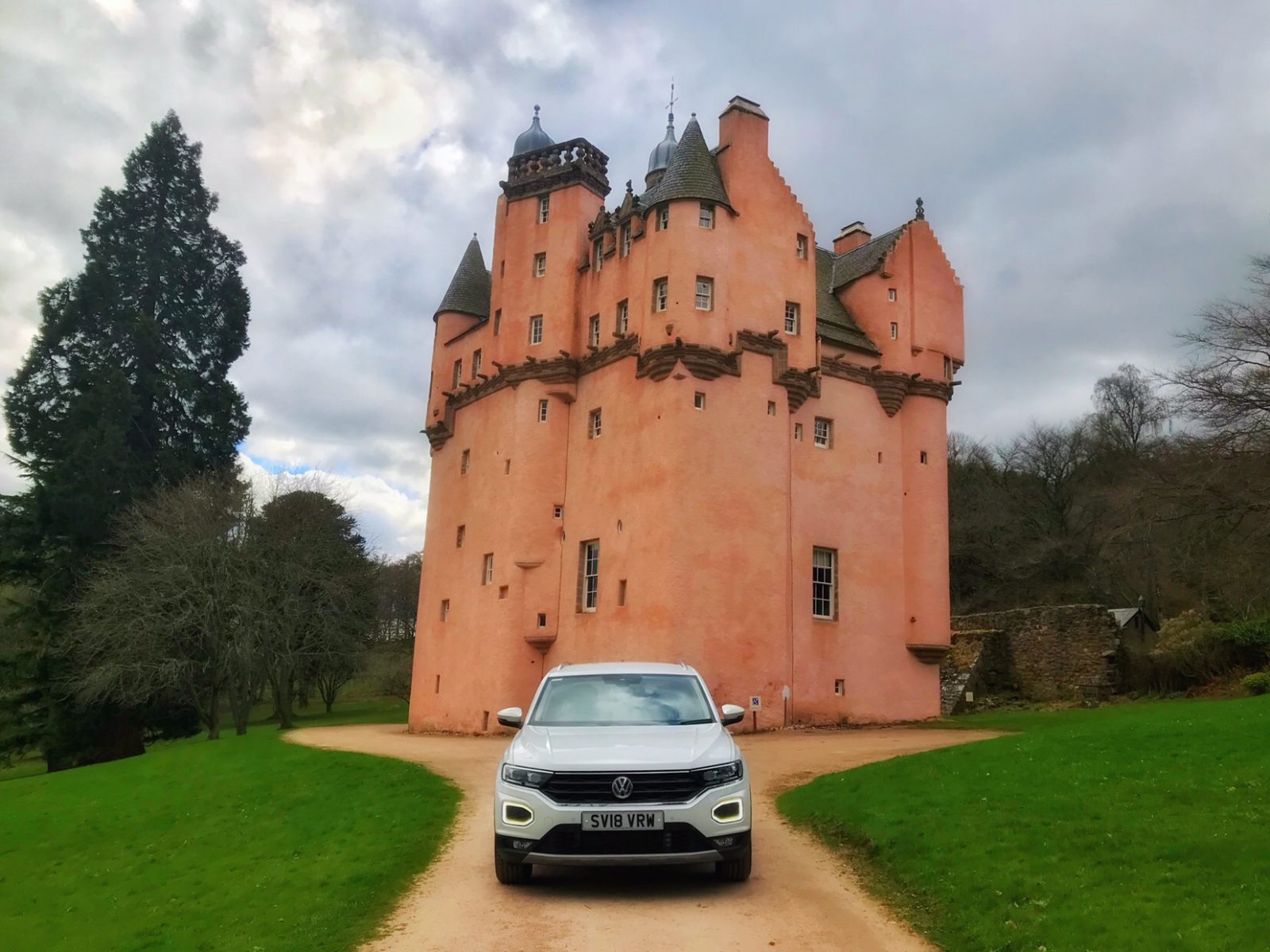 Shut up and Self Drive

Usually driving a car would involve your hands and feet but in this day and age, that’s a pretty old-school way of getting about. So, like some sort of retro German Voodoo magic, the T-Roc lets you go limb free, well, kind-of… This is kind of terrifying to begin with and you will probably make high-pitched noises you’ve never made before, but like all new things, you’ll soon get used to it and in turn, get cocky. 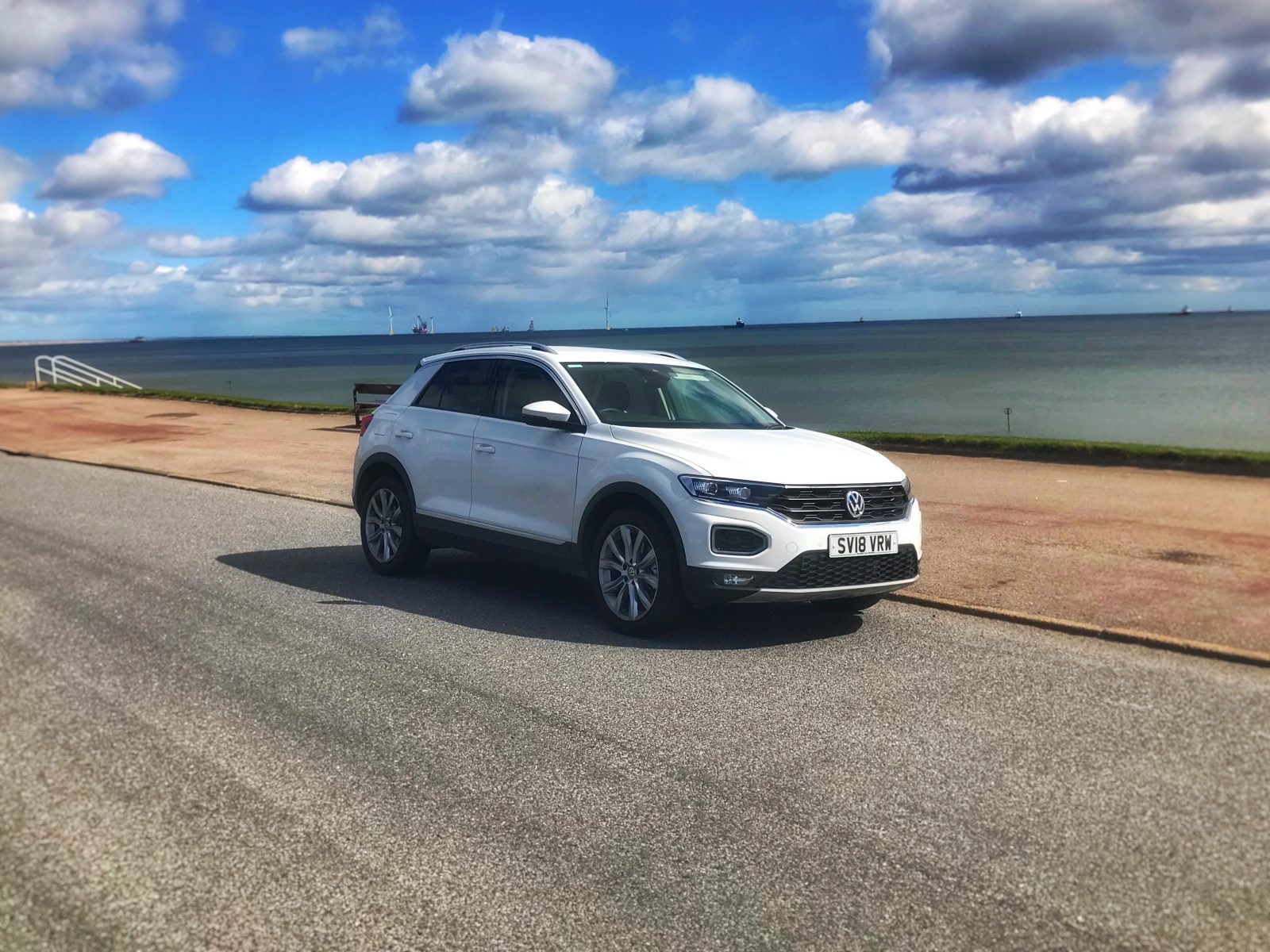 Roll my Windows Down and Cruise

You can set up the adaptive cruise control to lock into the car in front of you, setting up a safe distance. The car will then slow down and speed up depending on the flow of traffic. With the automatic gearbox, you could be cruising down a motorway with traffic coming to a stop ahead and the T-Roc will come to a complete halt and stop the engine, without yon’ driver touching a pedal. As soon as the car in front starts to move, the T-Roc kicks back into life and starts moving forward. This is handy if you are A,  A lazy driver or B, just finding all the driving about tough on the aged leggys, ken? 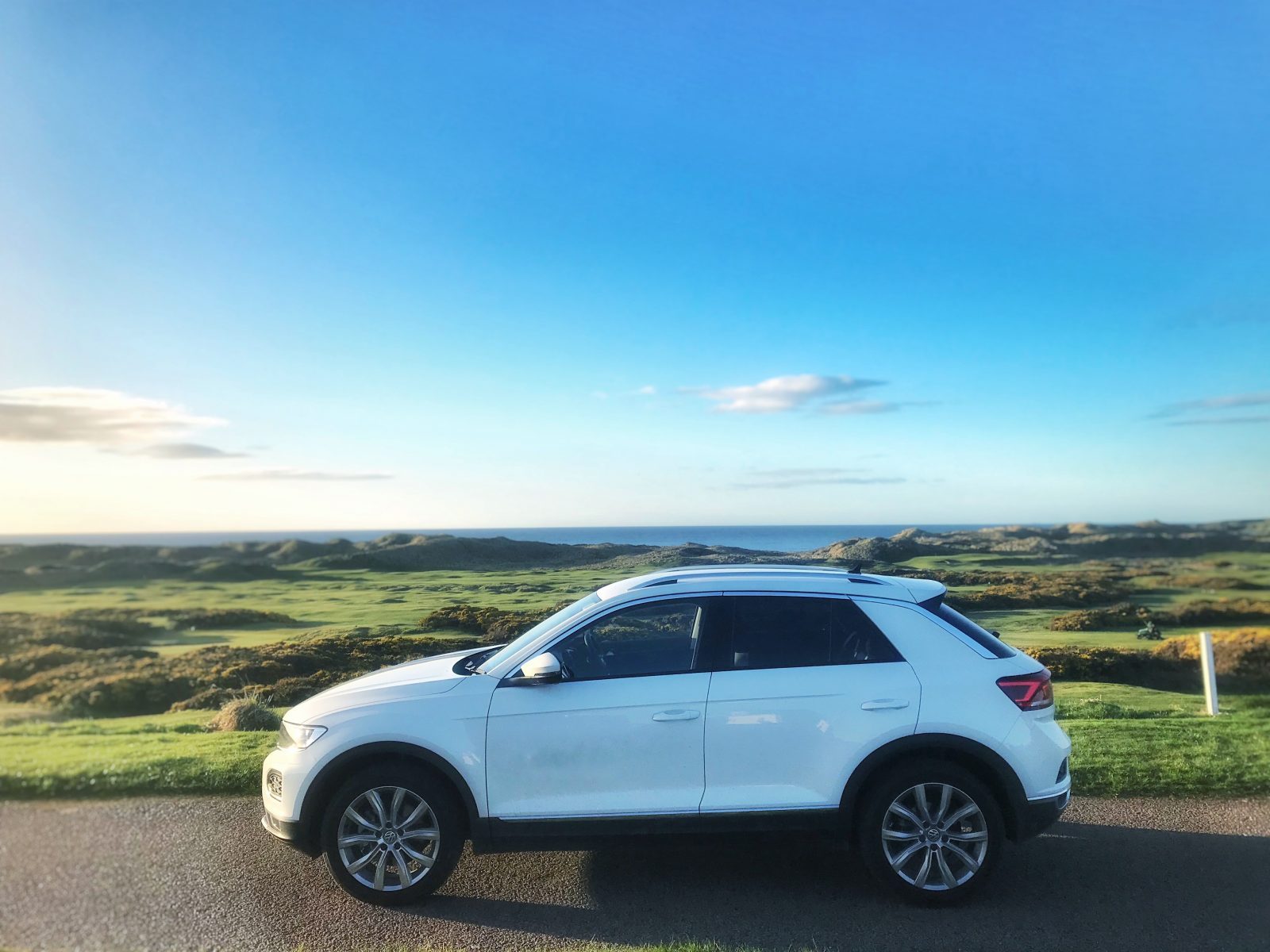 Mr T-Roc also comes with Lane Assist. This is the sort of feature that’s exciting and completely terrifying the first time you try it. On a dual carriageway with lane assist activated, the car will read the lines on the road with a hidden camera and steer the car. This acts as a safety feature rather than an excuse to knit a scarf or juggle behind the wheel but it’s a sure indication of how the way we drive our cars is changing. 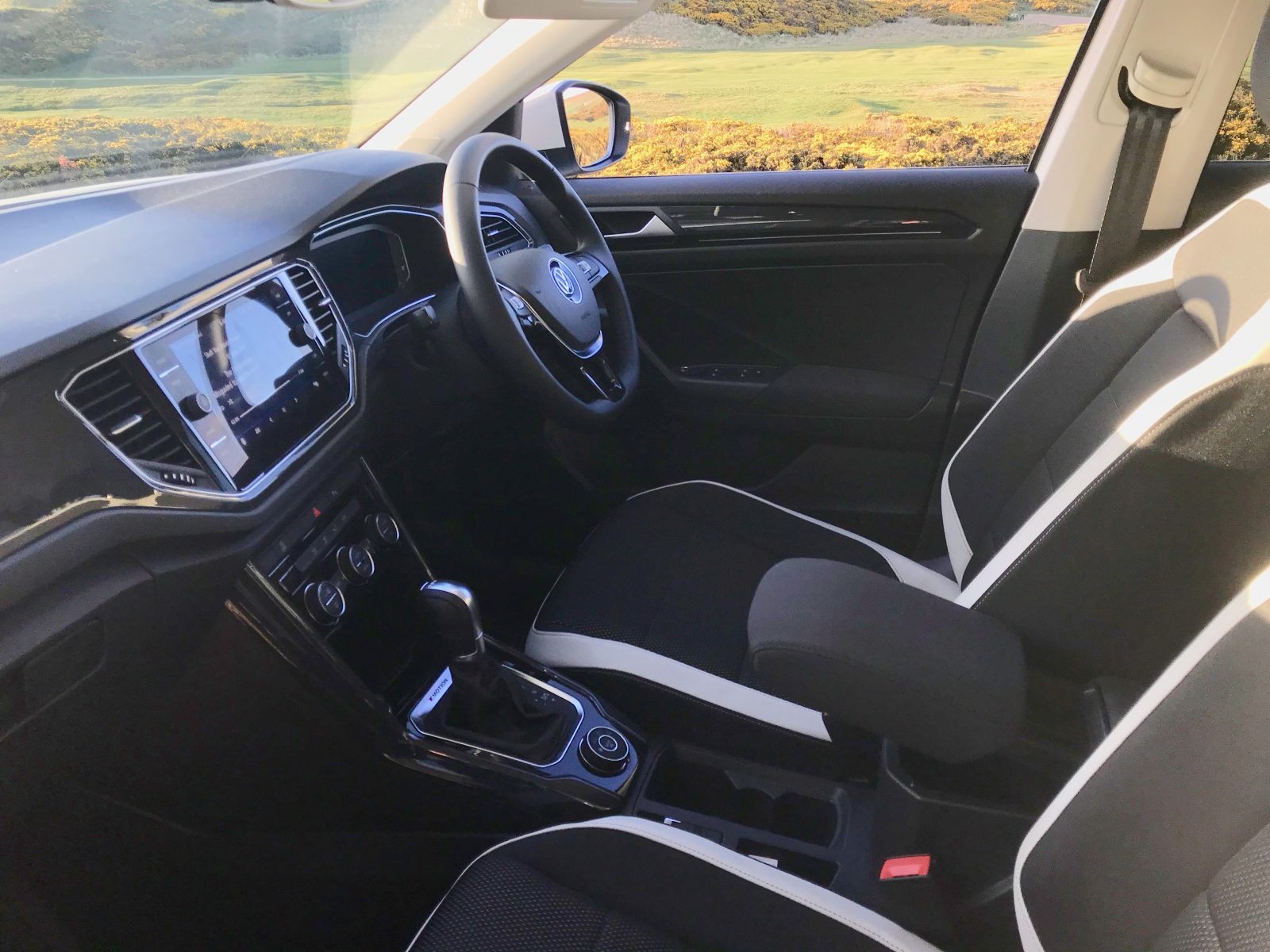 VW’s have logical and effortless controls which are easy to navigate and use. I just love a VW so I’m maybe a wee bit biased but then I also have very good taste, you be the judge. The steering wheel controlled the lane assist, the cruise control, the dash display and the volume. The dashboard was all digital and had loads of different options so I could set it up to my preference.

A massive touch screen in the centre controlled the sat-nav, bluetooth, voice control options, radio and other media sources. My only tip for this is to make sure you keep some wipes in the glove-box, unless your touch-screen likes a face full of make-up. Our T-Roc also came with Apple car play allowing you to sync carpatible apps with the touch-screen. 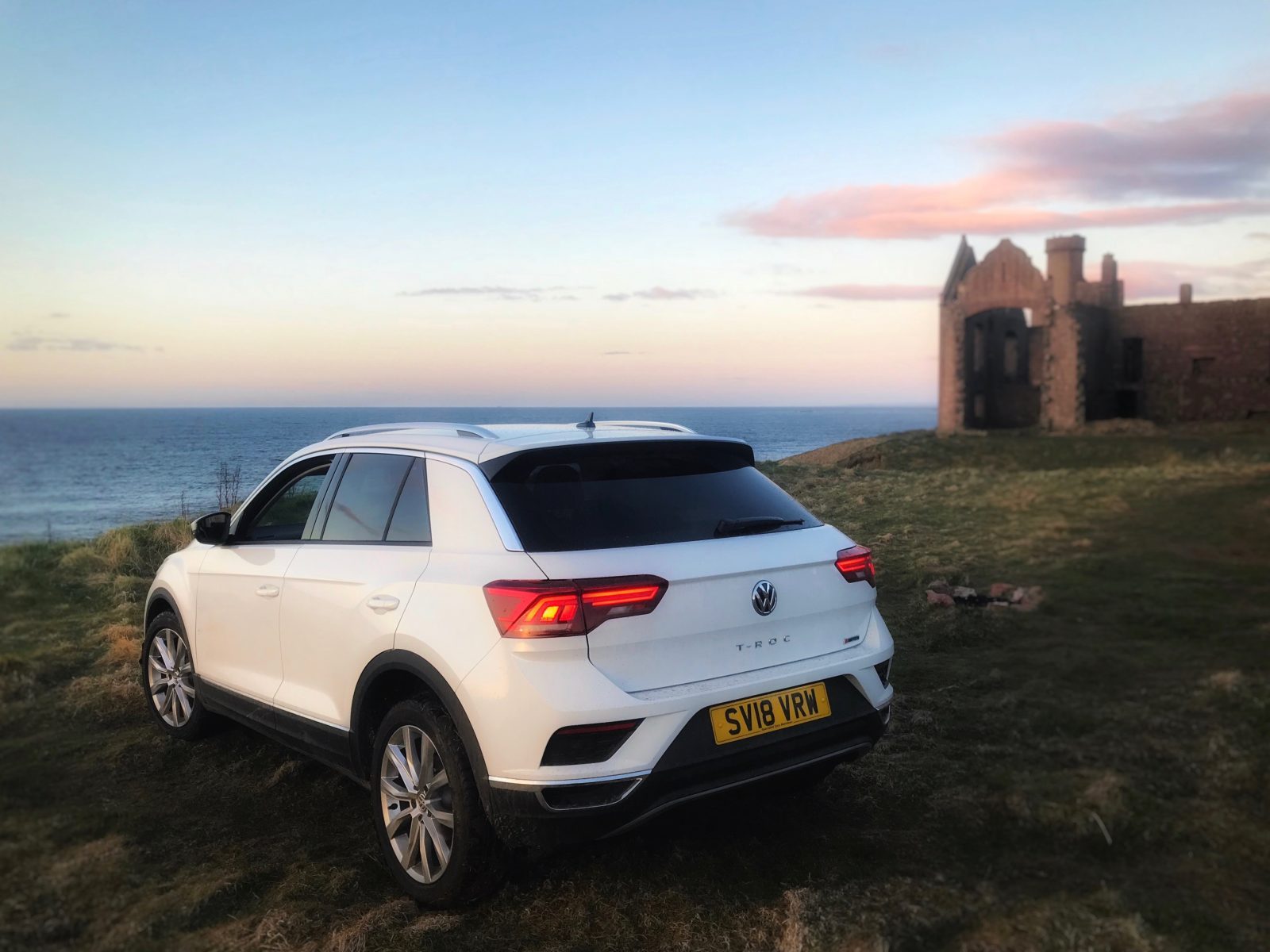 When you first start driving, the power of this car is not completely obvious, although VWs tend to be relatively nippy devils. With a quick flick of the gear stick, you can change the driving mode to Sport. Putting your foot down in sport literally unleashes a beast under the bonnet. The T-Roc becomes far more responsive and the 2 Litre model we had boasted some seriously impressive acceleration. This model isn’t just a fast SUV, it’s a fast car baby. 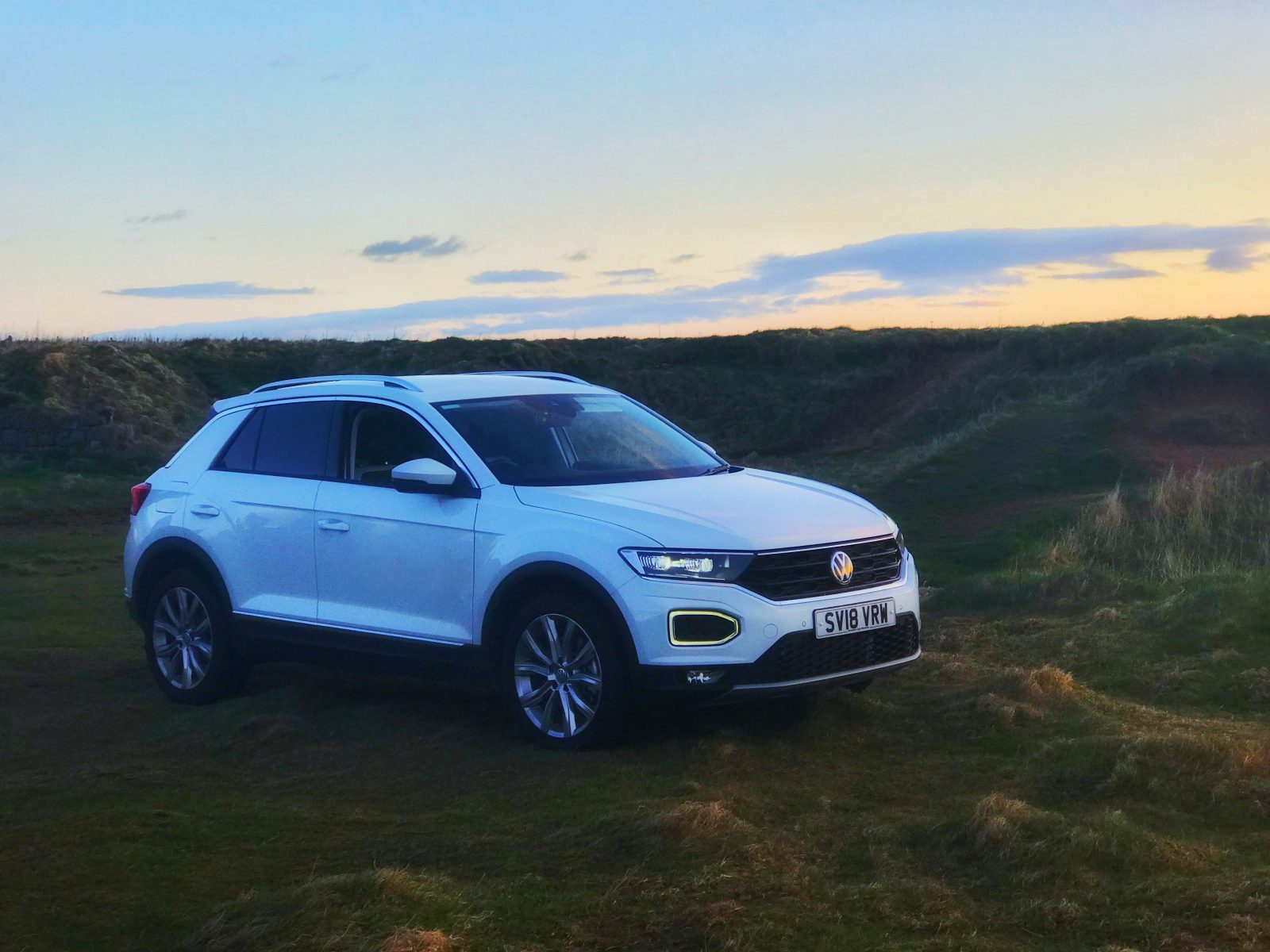 A scroll wheel in the centre console activates the 4 wheel drive system. This is where you select your current driving conditions and what you’re planning to do. I found this particularly ideal for driving around a cliff-side ruined castle at 4am whilst attempting to catch the sunrise. I did that. It was cold and bloody terrifying. 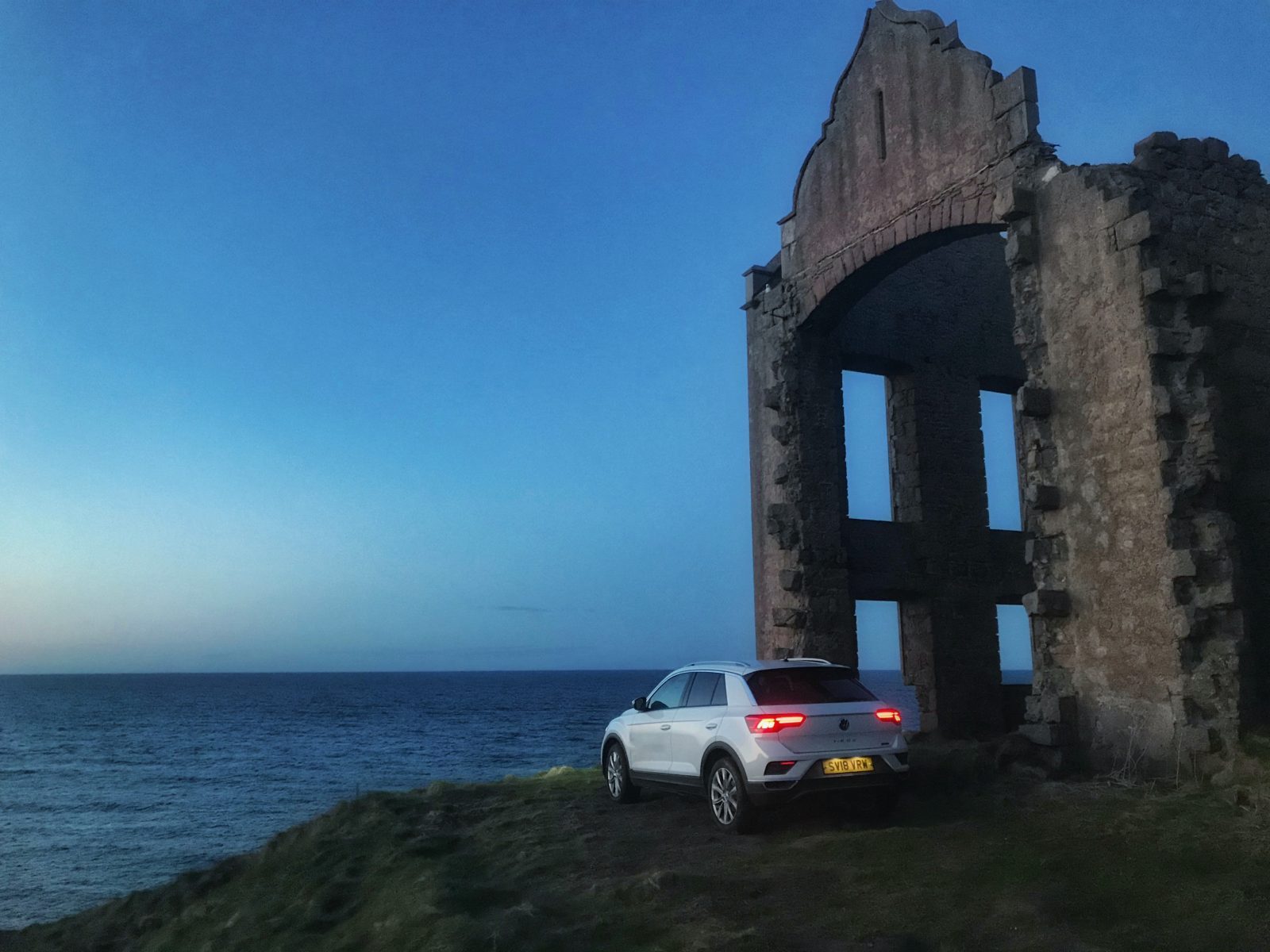 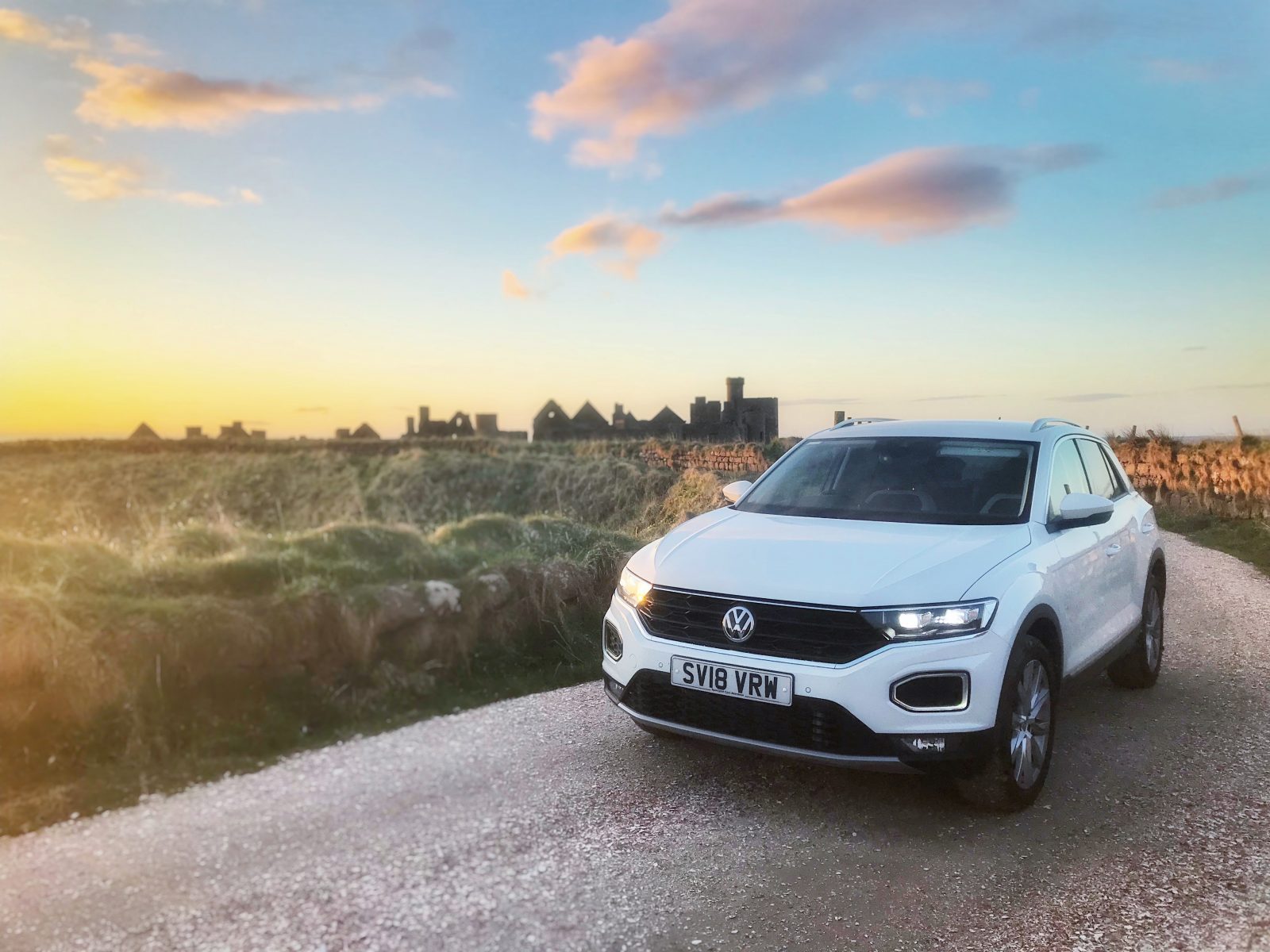 Castle your eyes on this Beauty

Our T-Roc-test-drive-come-American-tour combi took us to some pretty special North East spots. Here is the rather dramatic cliff-side Dunnottar Castle. Whilst this historic, spectacular spot has many things going for it, it just ain’t no good for a castle-side car shot, for obvious reasons. 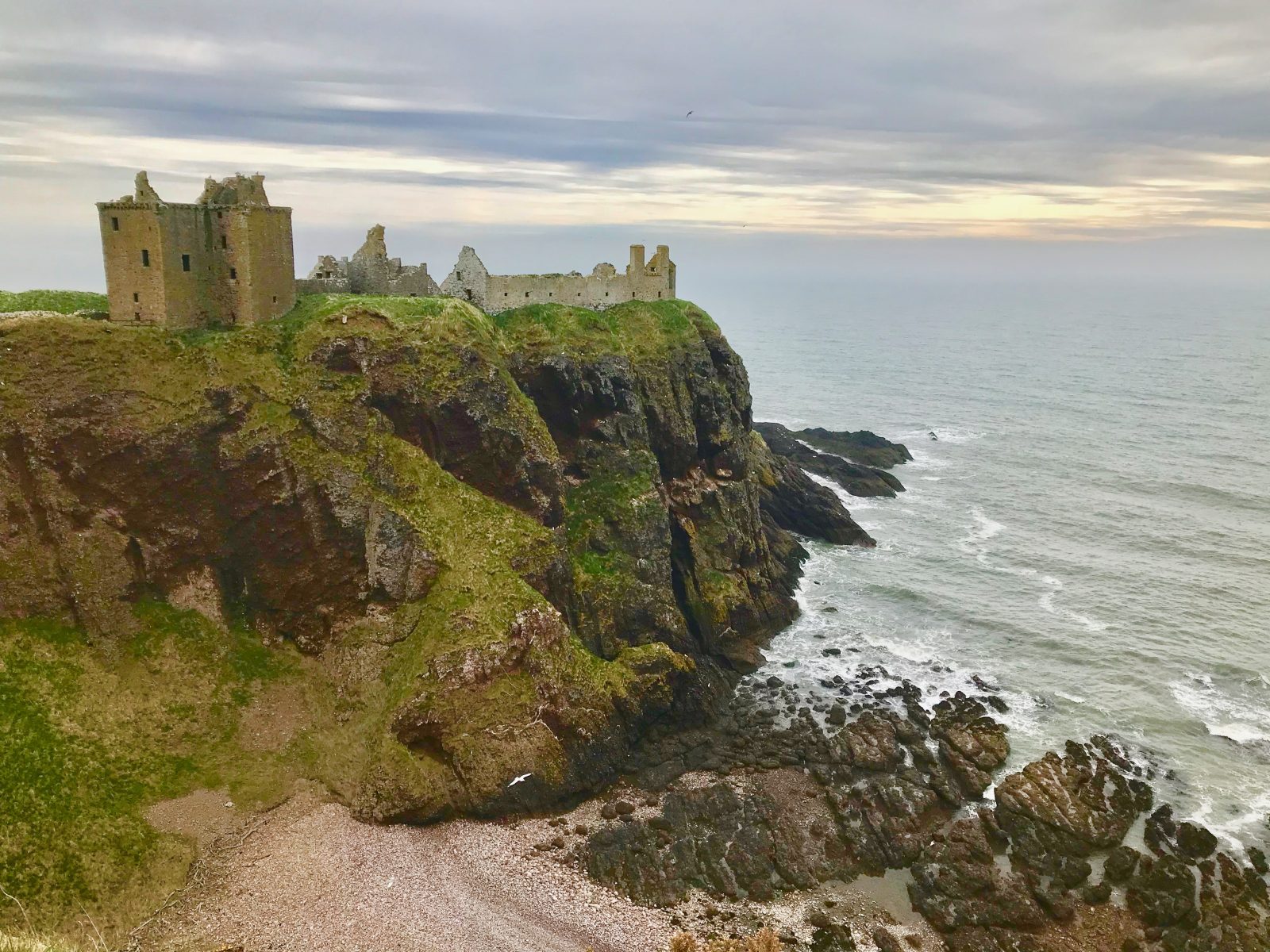 Next it was Drum Castle, a Jacobean mansion near Drumoak. 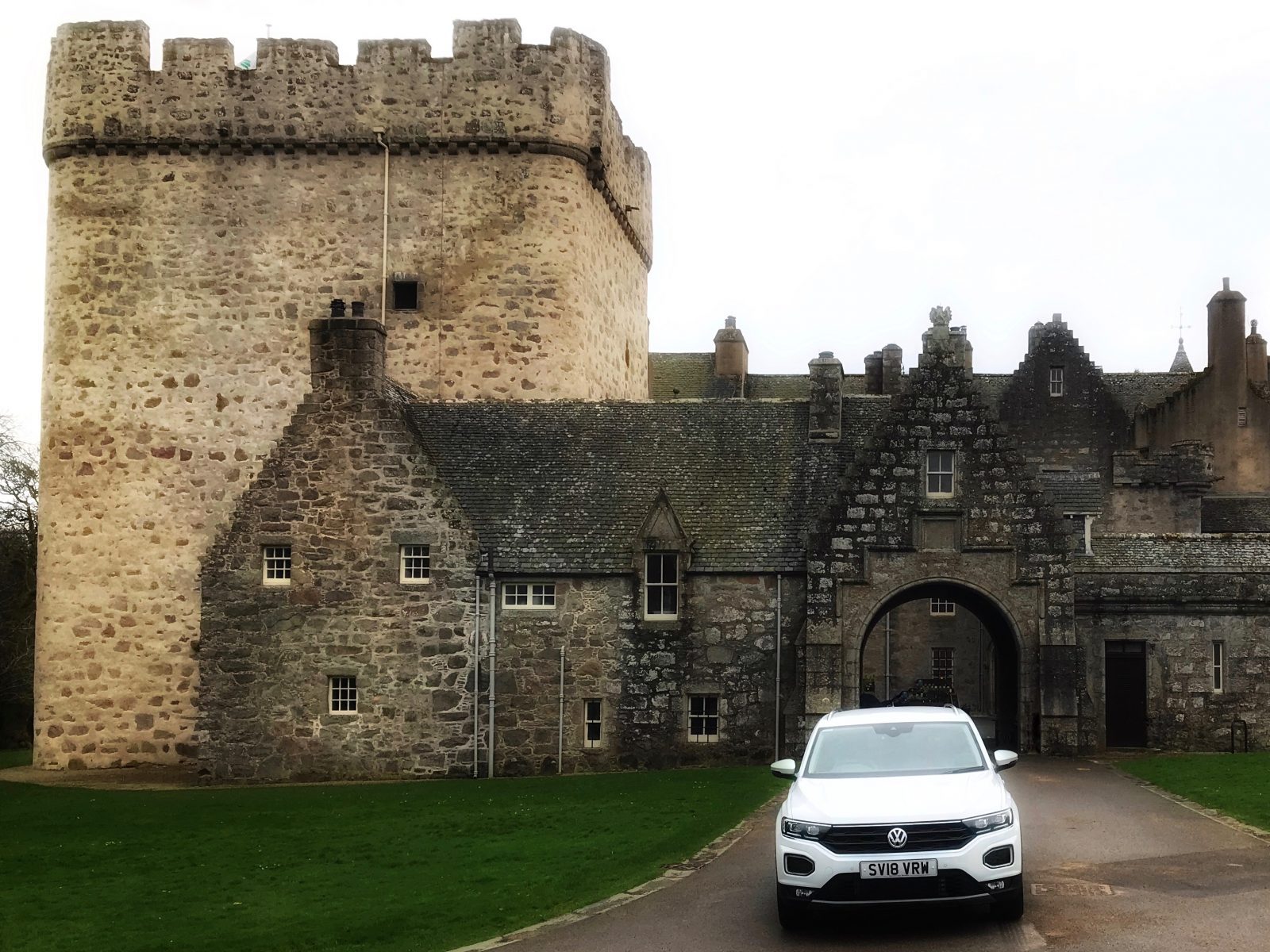 Then we went to Castle Fraser, an Outlander fan favourite and home to our tourists 85th grandfather six times removed. 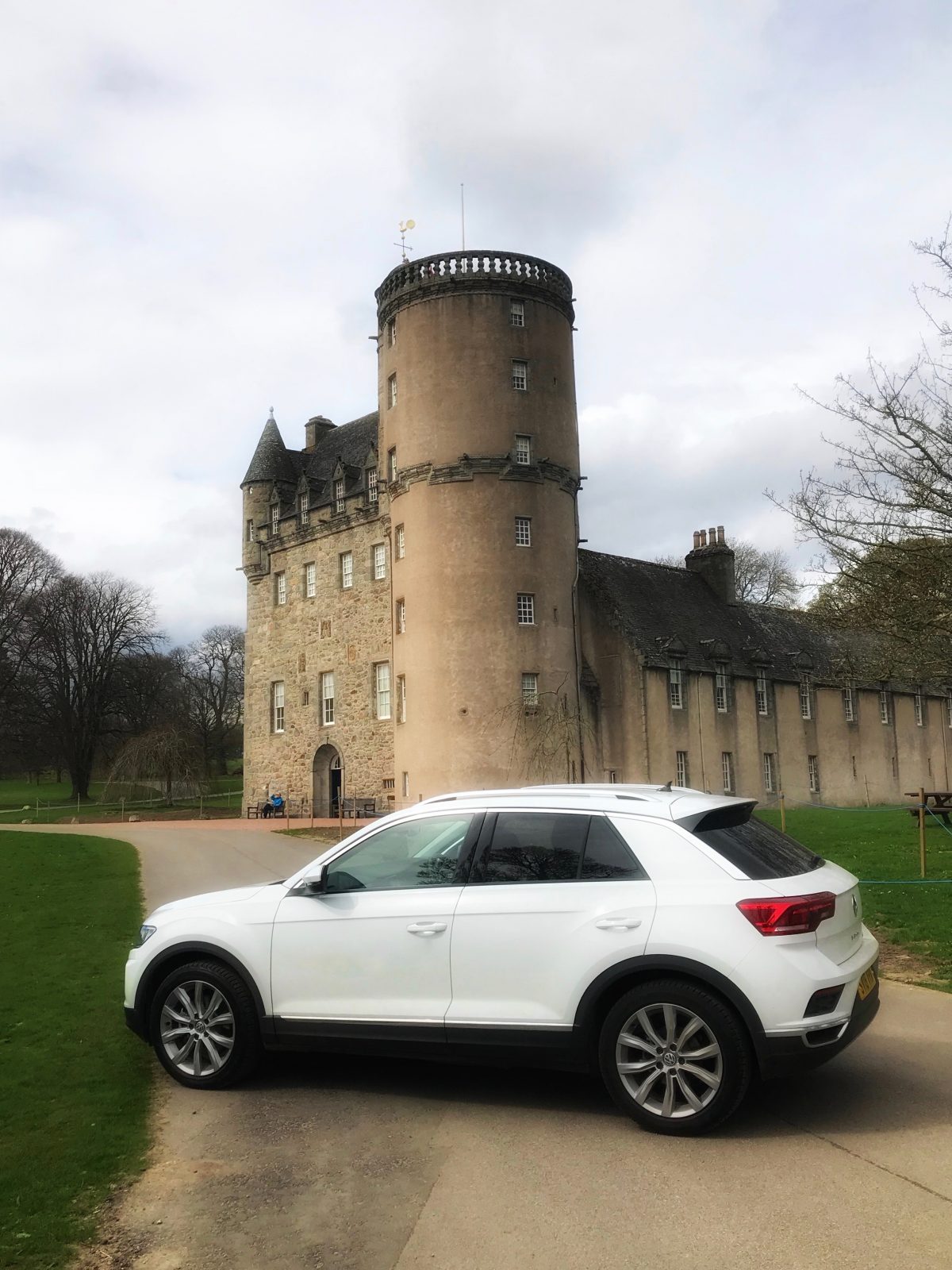 Then onto one of my favourites – Craigievar Castle, the Forbes clan home and inspiration for the Disney castle. If you don’t believe in the possibility of magic then you will never find it. 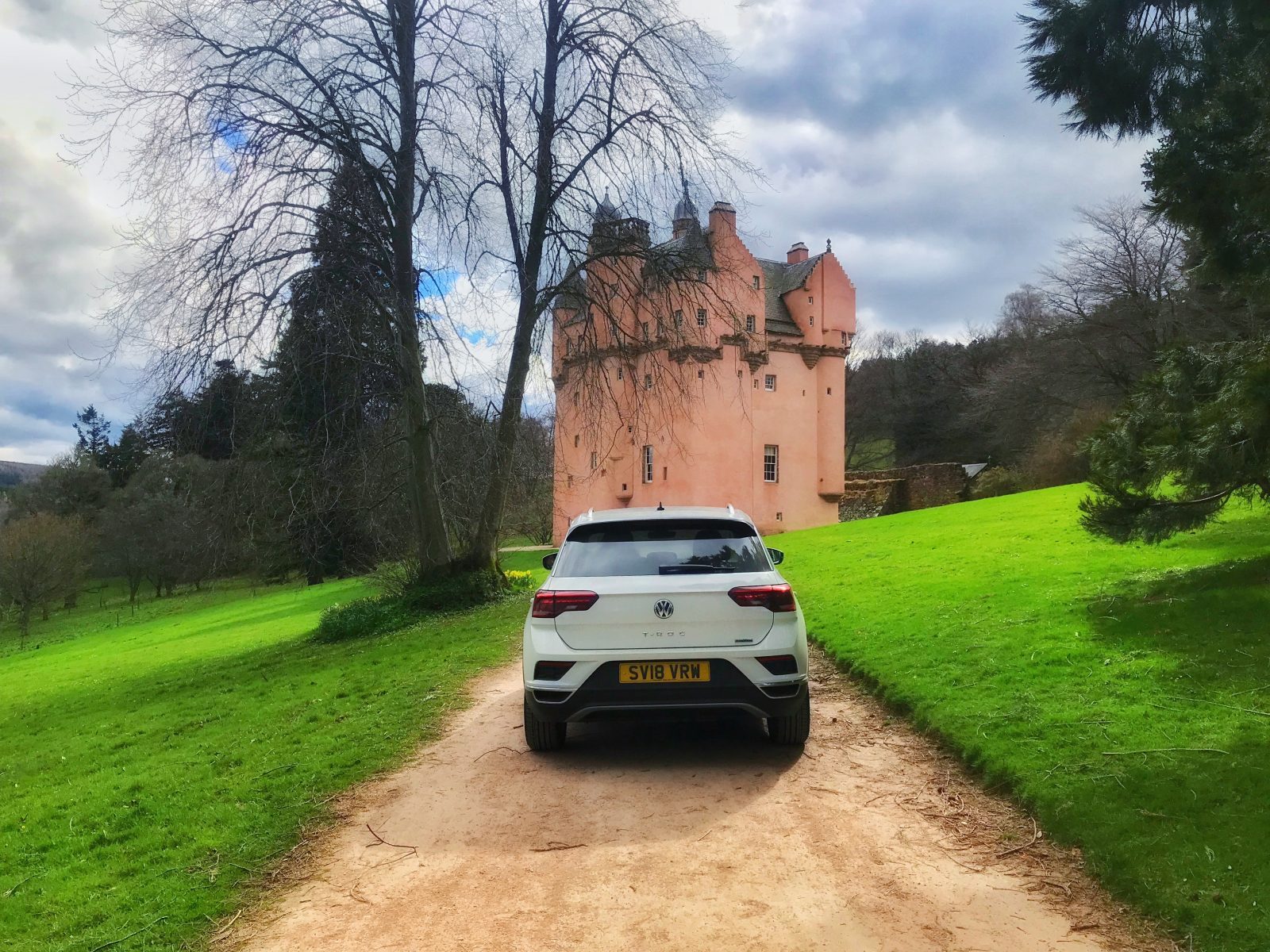 And finally Slains Castle in Cruden Bay, the home of Scottish Dracula, sailor ghosts and even… Aberdonians. 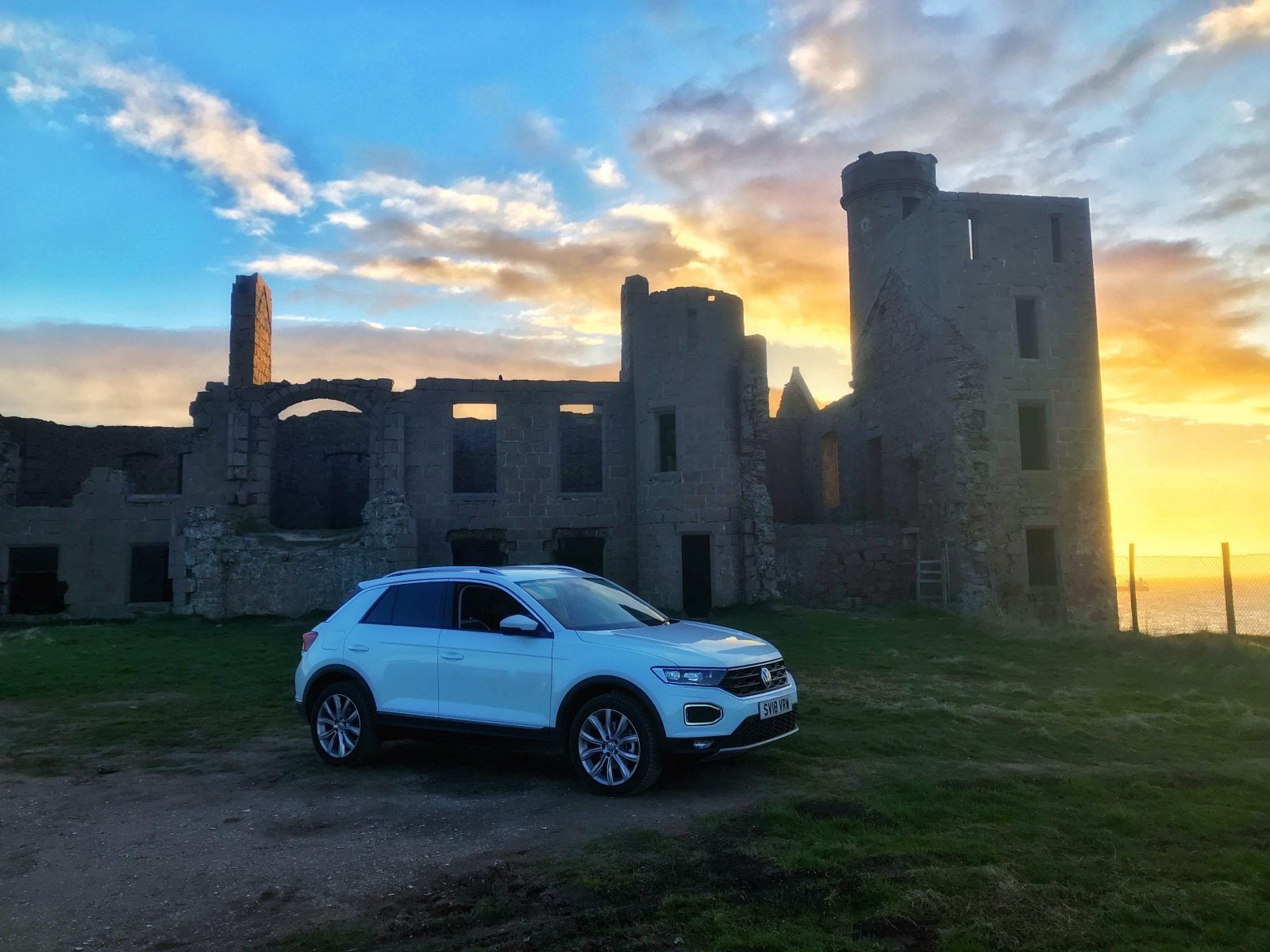 Put quite simply, the T-Roc is a great car and we want one for our VW collection (we currently have one old-man Passat and two would definitely not be a crowd). Mr T-Roc has all of the add-ons you could want along with being smooth, comfortable, nippy and so easy to drive that even a Labrador could drive it. If you want to take one out for a test drive, head over to Specialist Cars Aberdeen.