And all that jazz 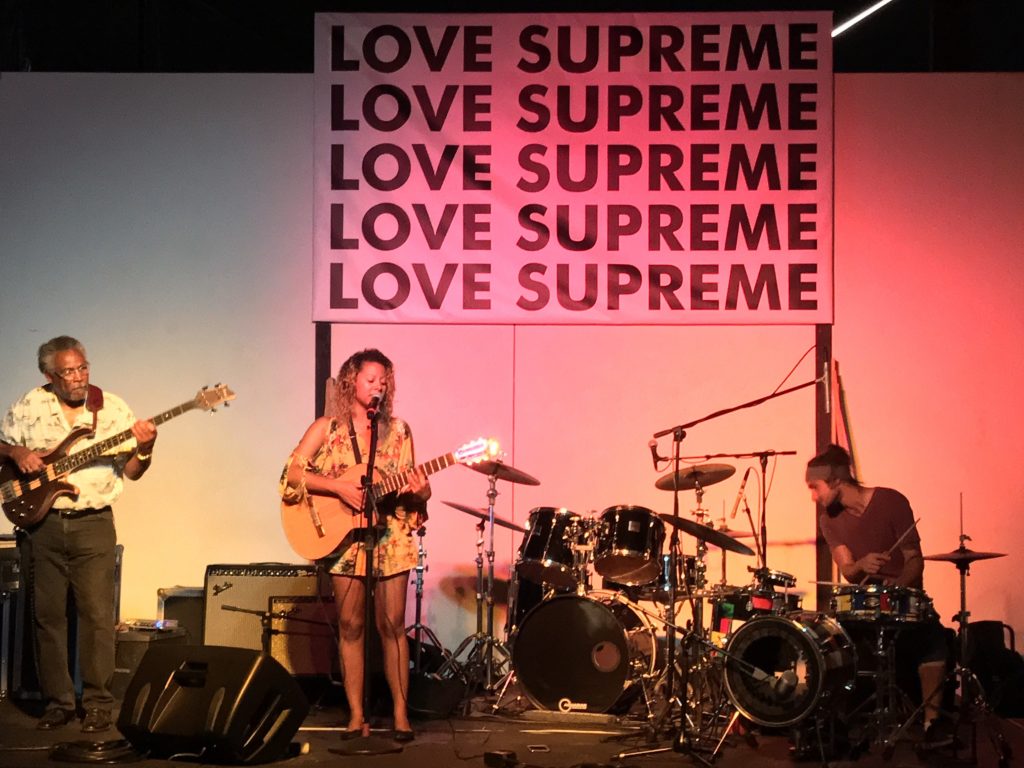 After a busy day of boozing and snoozing, we were raring to shimmy on down to Love Supreme. When I say raring to go, what I really mean is, Scott was raring to go and I was in bed under around 7 sheets. Regardless of my surroundings, I’m still pretty shocking at ending the obligatory disco nap. Waking up was hard after slumping my bod around the scorching humidity that is an average July day in New Orleans.

Make up, little lady, Make Up

I would apologise for putting my make up on in bed, under the sheets. However, my face has never looked so good, which leaves me questioning my relationship with face paint until now.

Funked up and ready to two step on down to Love Supreme, the excitement was starting to kick in. William Grant & Sons is a little more personal to us, with William Grant being from Dufftown, just up the road from our wee nook in Aberdeenshire – we were feeling proud as punch.

At Tales of the Cocktail, always expect the unexpected, but then add mystery, dropped jaws and some superb craftsmanship. No event is ever the same and each one has its own little perks and oddities. 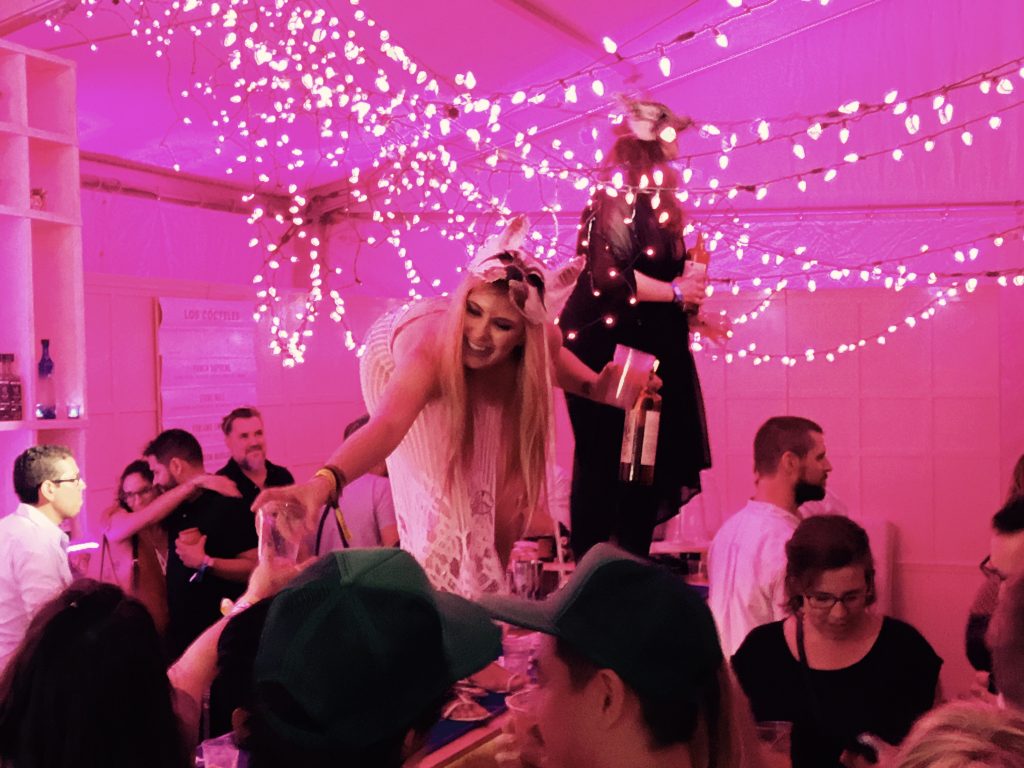 Scott and I can’t put two and two together. In fact the name Crescent Park suggests that the location was indeed, a park. We thought maybe a nightclub or a glitzy turned up conference centre. Oh hell no! Would William Grant & Sons really throw the mother of all parties anywhere outside of a massive, fairy lighted, booze filled park?

Queuing looked horrendous but sometimes looks aren’t everything, the security was tight but we were in to the venue in no time. I was judging this book by its badass cover. With the hot, steamy dark hours, Cresecent Park was lit up like a mysterious and inviting wonderland. I was Alice.

Darling, where was there not beautiful booze? Crescent park, set next to the Mississippi River had numerous dressed up funky looking booze stalls, with each of the famed brands edging each other offside with a jazzier, juicier set up. There have been easier tasks than rounding up my heart eyes for this piece. 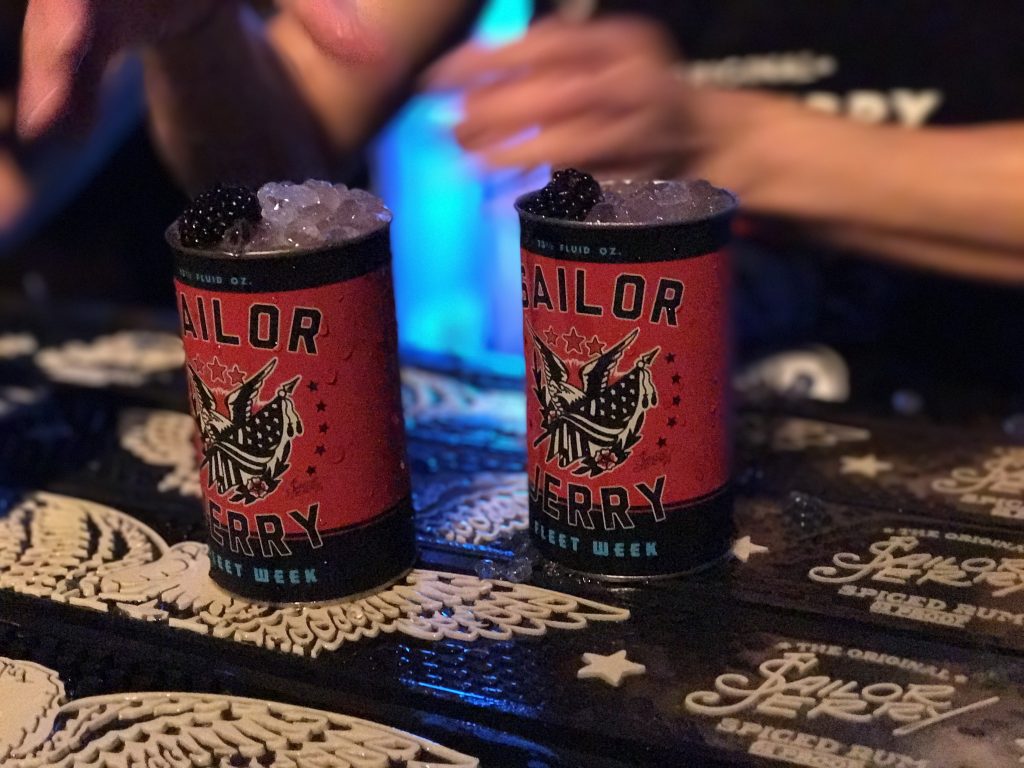 Sailor Jerry was our first touchdown in funky town. I swear I could smell that spicy, sweet rum over a mile away. We checked in with brand ambassador Daniel ‘Gravy’ Thomas for a quick howdy. We had caught up with Gravy earlier in the day at the Bourbon Orleans Hotel but the mans aura is beyond addictive. Besides, he was checking me in with the UK brand ambassador EmmaLi Stenhouse who is not only a little beauty, but has sass in her breath. 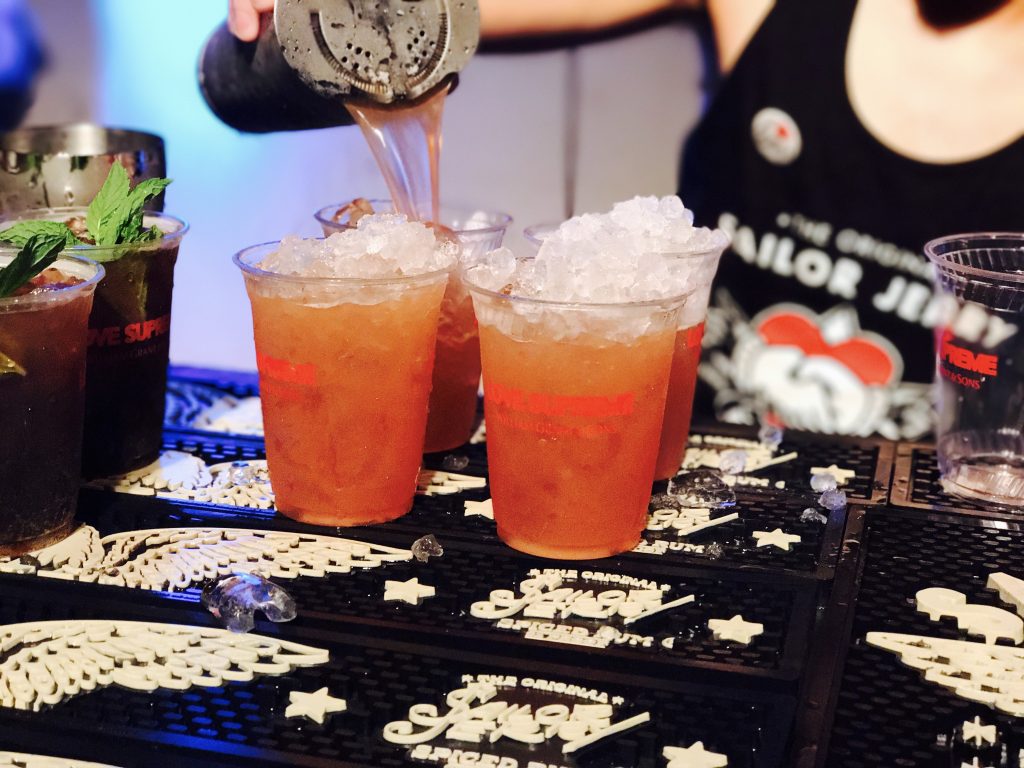 The set up at Sailor Jerry was beyond ideal. Smashing, personality packed bartenders were throwing an array of cocktails out of the box in some sweet looking barware. The audience at the bar never dwindled and we were in love with their ‘Teachable Moment’ cocktail, ingredients below.

If you think for a moment that Sailor Jerry, with their inspiration coming from longtime tattoo hero, Norman Collins, would not have a tattoo parlour set up at the party, then you would be wrong. Free tattoos by the guys at Downtown Tattoo, inspired by the Sailor Jerry brand were on offer. Gravy had stuck us on the list at our earlier meeting so Scott and I were ready to swallow. Literally, we both got a matching swallow while we sipped on Teachable Moments. More from SJ to come. 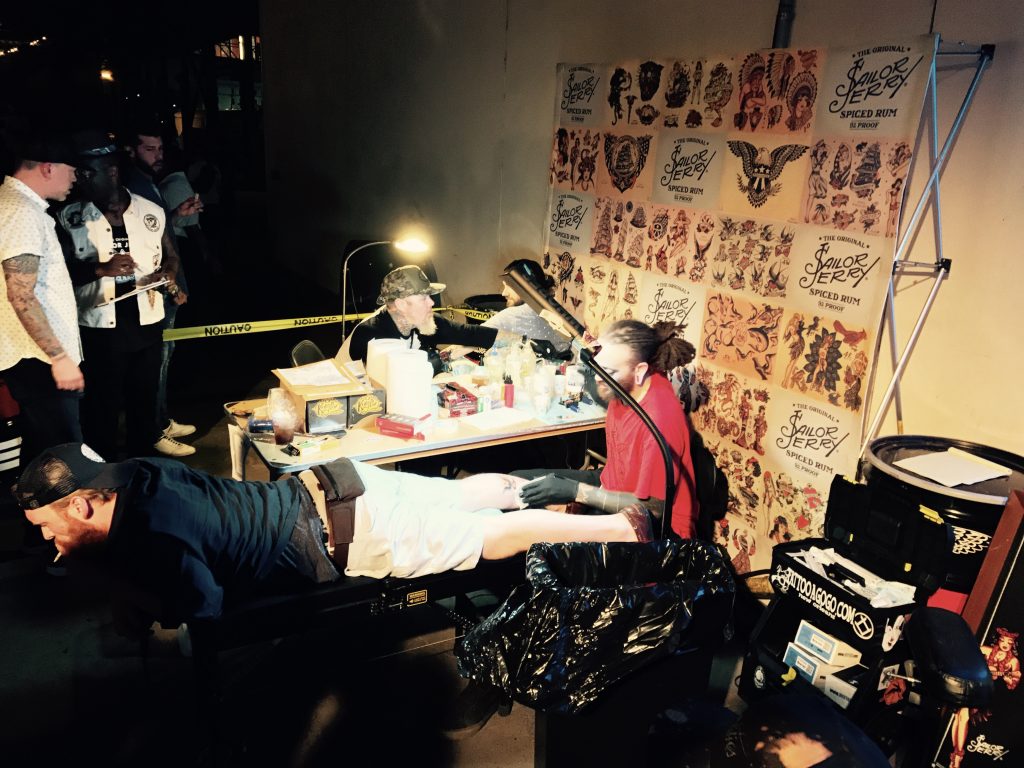 Hey Hendricks Gin, would it be bold to say I love you?

Before we even arrived at the Hendricks official spirit station, we were met with an undeniable spectacle. This can only be described as a ‘cucumber slicing truck, peddled and operated by a man on a bicycle on top of the truck.’ Now, does that not make you reimagine Hendricks Gin? What a fabulous, eye catching and truly memorable set up. The idea was to pop your Gin cup under the cuc’ chopper for your freshly bike cut garnish. What is life? 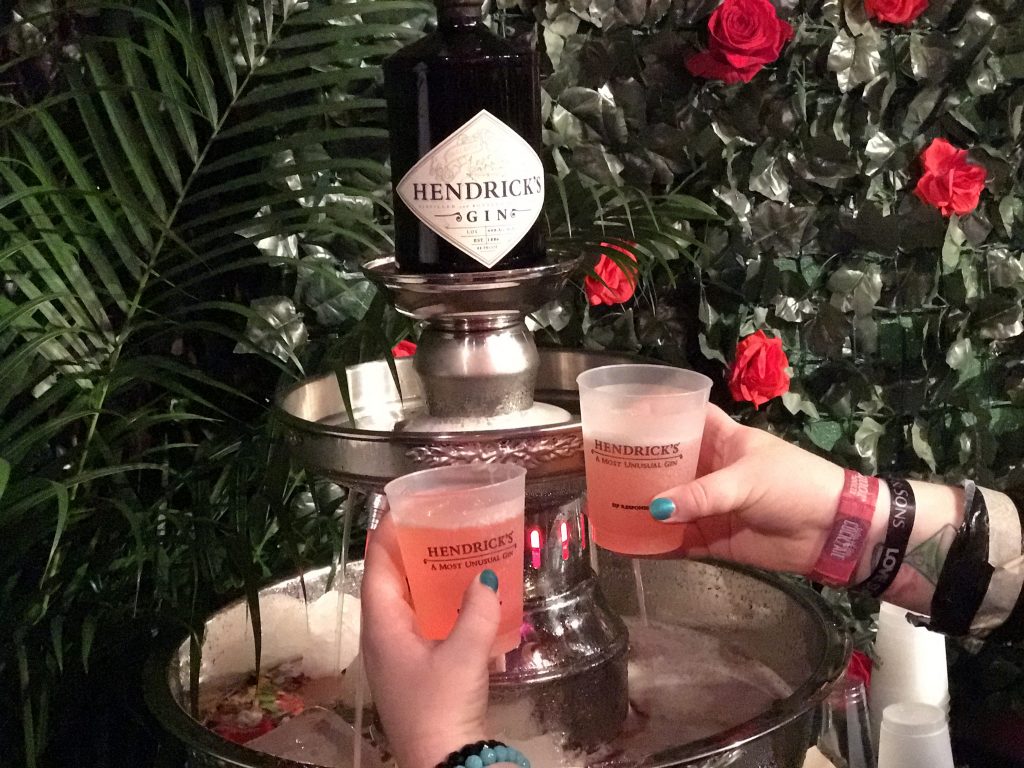 Finally we got a chance to muddle through the last of the outside stalls so we could show face in the massive, magical and lit up tent towards the bottom of the park.

In the tumbler tent and first to greet us was US Hendricks Gin Brand Ambassador Mark Stoddard. What this man did not know about Hendricks wasn’t worth knowing. I ask some mighty odd questions sometimes but Mark had an answer for everything. He was very quick to offer us some tasty looking punch from the gorgeous Hendricks fountain. Neither Scott nor I were at the point of refusing power Punch. Although I expected a much stronger, more potent elixir, I was pleasantly surprised at the slightly sweet, light and refreshing notes behind the fountain fun. 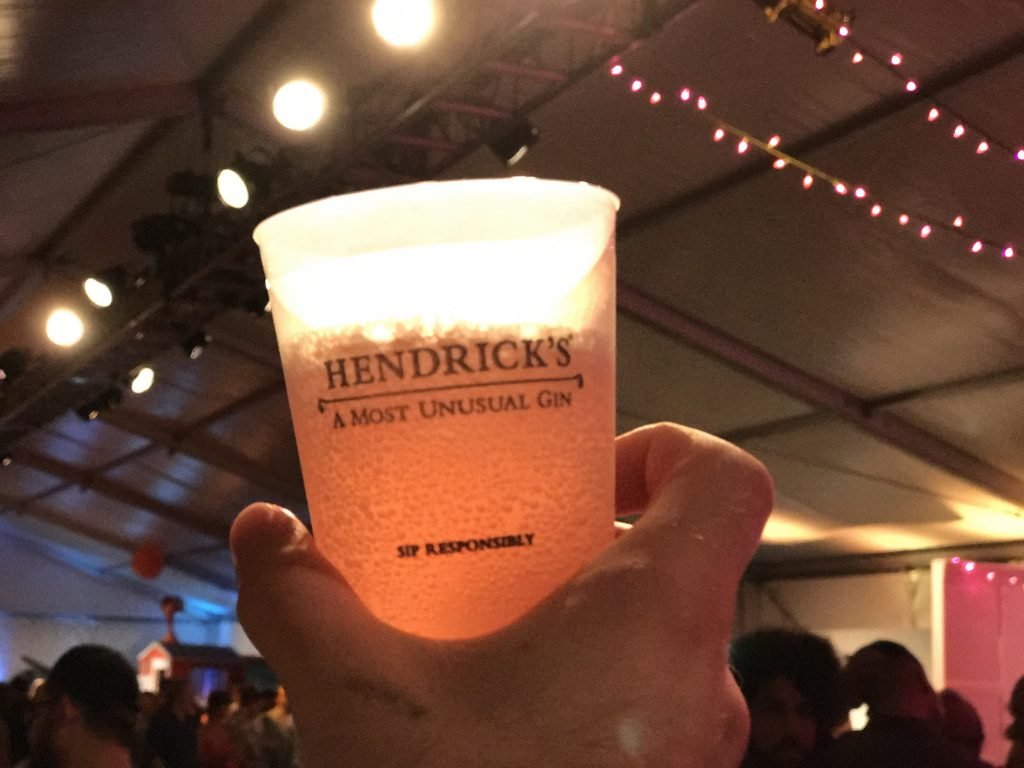 We love the Scottish…

As if our night wasn’t at peak bliss, boozed up, loosened up and tatted by Sailor. We even bumped in to a man in a kilt.

Firstly, I applaud the man in the kilt because I was cooking like a turkey in the New Orleans night heat. Secondly, this was no ordinary man in a kilt but was in fact David Allardice, the US brand ambassador for Glenfiddich. Home from home baby! He was in prime form and originally from Kilmarnock although he now lives, loves and works in the states. He even divulged he has family from Stonehaven, which is practically next door to our wee hole in Aberdeenshire. Banter, chat, and up for answering my mountain of questions, Dave is a top bloke. Although it was infact him who I have to blame for my downfall in suggesting the Monkey Shoulder after party…

On that note, the rest is history…

By this point, I am assuming you knowledgeable thinkers have put 2 and 2 together and have reached a Tales of the Cocktail conclusion. We are here as media and have big love hearts for the Tales team who not only invited us along as media, allowing us to taste and tell all but also for their undeniable professionalism. As per always, my opinions are relevant, interesting and mine, mine, mine!