The bus was purple and green, like Kermit the Frog sporting a burlesque boa. It brought a braw qwerk to a slow Sunday for sure. I’d come across WOW Scotland a number of times on the gram-a-lang and never actually clicked they were a tour biz, I thought it was just a mad-about-Scotland account, cause there’s heaps of them, which I guess in a roundabout way, it kinda is. Until they reached out asking if we’d like to join them for an Inverness to Skye day tour. 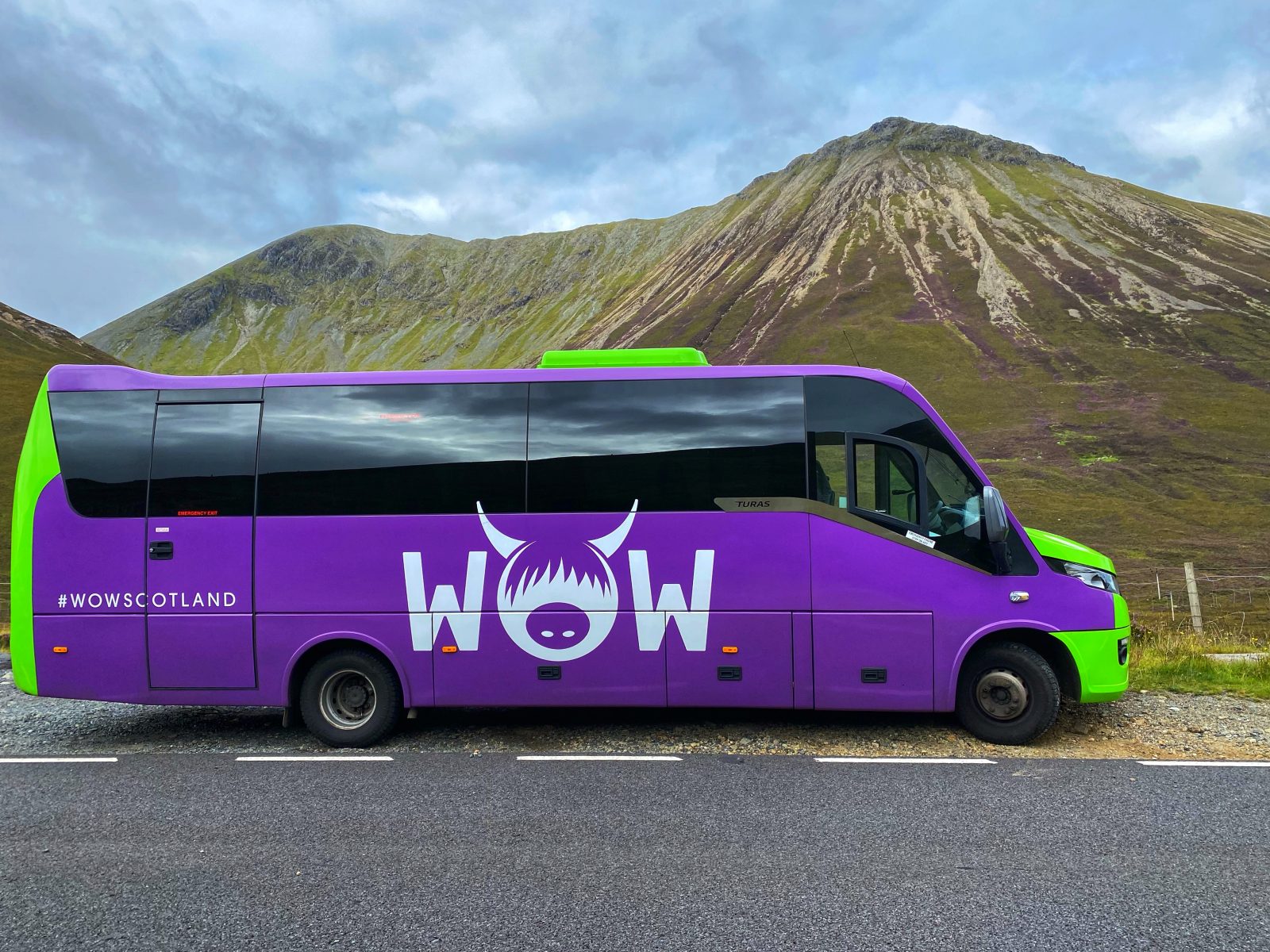 We’ve been to Skye 542 times, and I’m nae even exaggerating. And we’d been on a day tour to Skye from Inverness before, with another tour company. Except we went in Winter, when Skye was covered in a thick throw of sparkling snow. It was absolutely stunning, we even went sledging at the Quiraing! But we’d never been on a day tour to Skye in half-decent weather. What a treat this was! 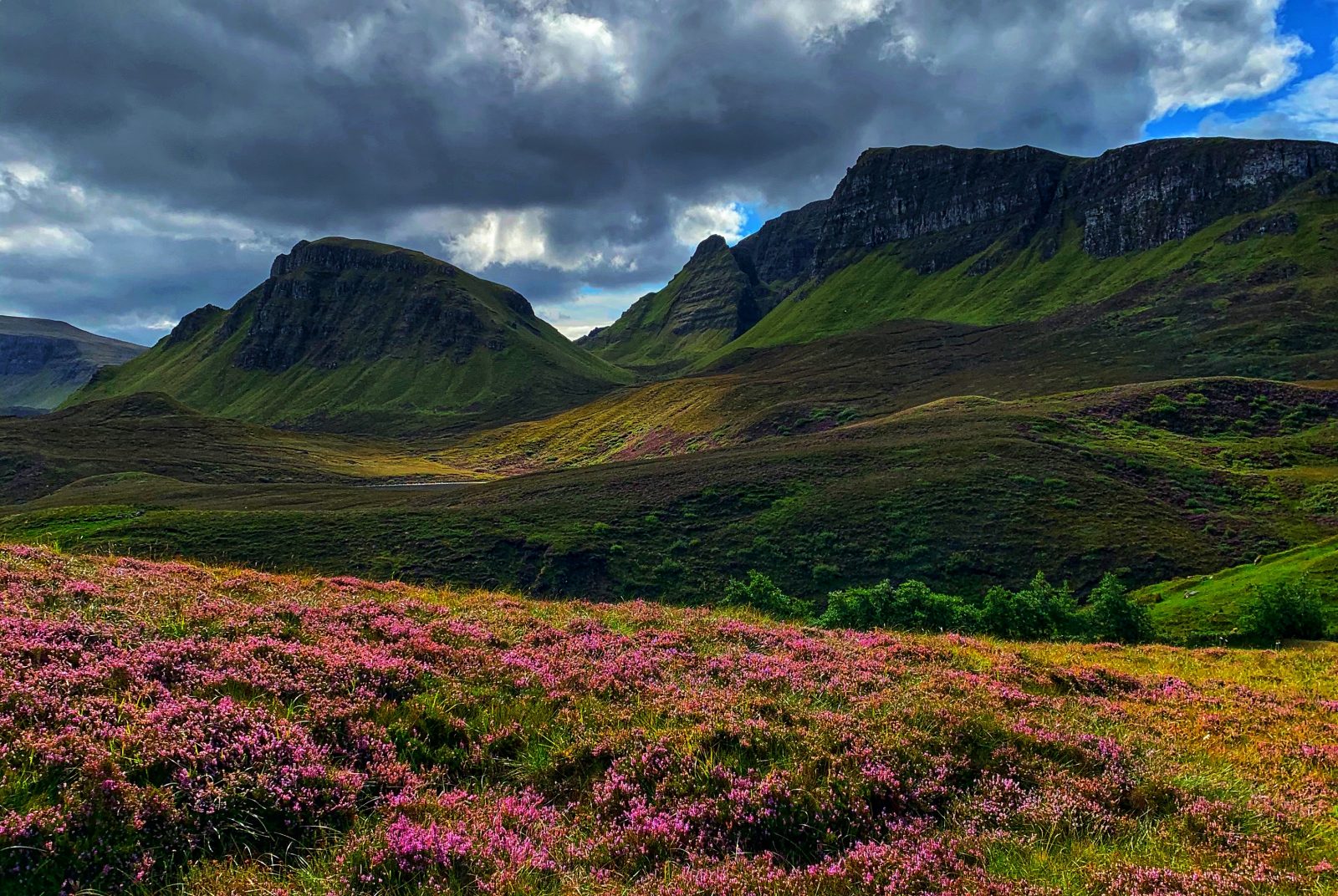 Taking a day tour to Skye is a lush idea for planning a longer trip. Trust me, you will want to come back.

If you’re absolutely itching to see some of the island, but you’re low on time (who isn’t, I live here and I still don’t have enough time), then give a day tour a whirl. 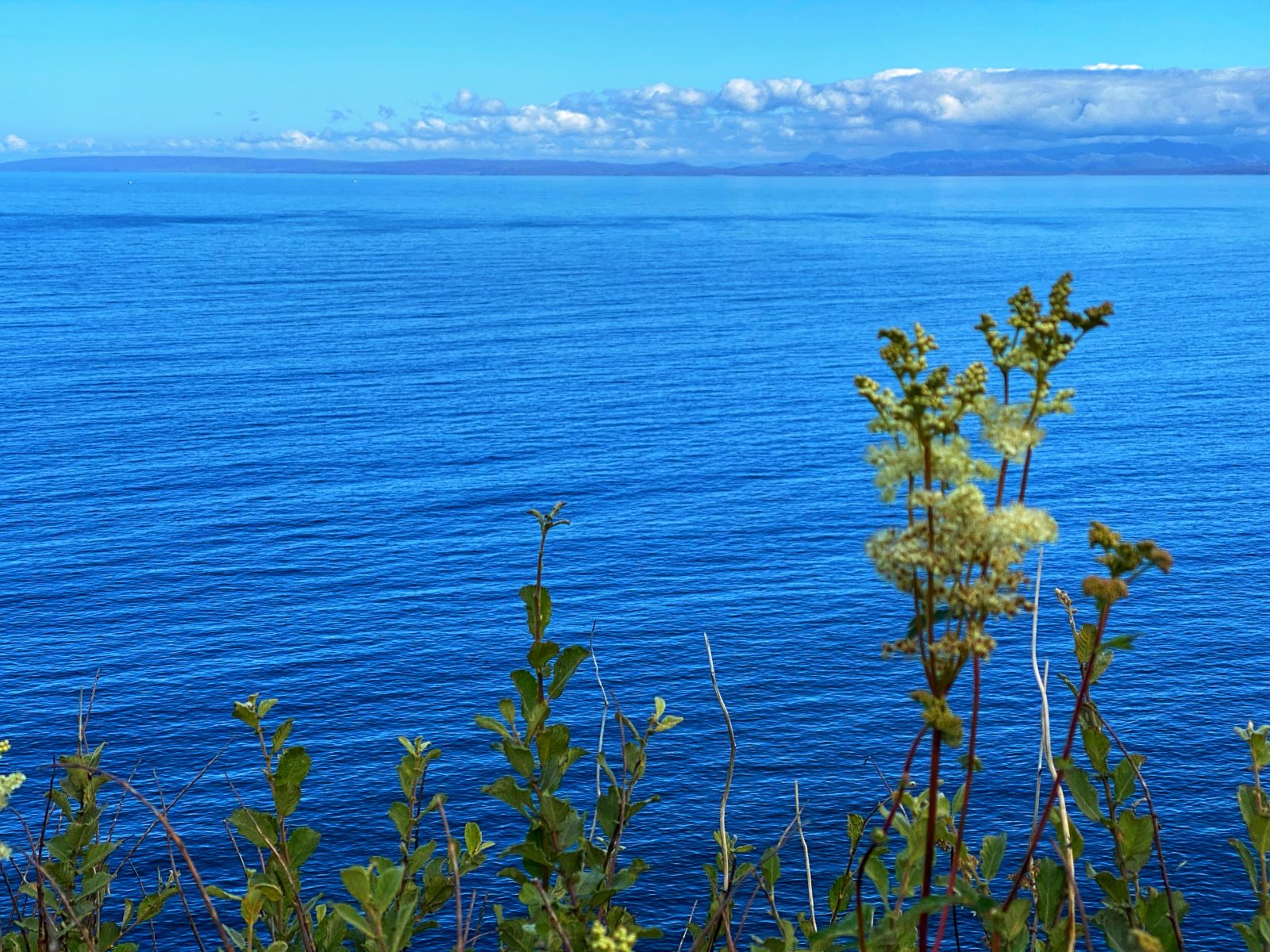 Having spent a whole week on Skye before, and nae wanting to leave, I can comfortably say that day tours are basically an advertisement for Skye, providing perfect planning inspiration for a longer trip. There’s a reason why so many folk advocate for Skye holidays. The place is pure magic. 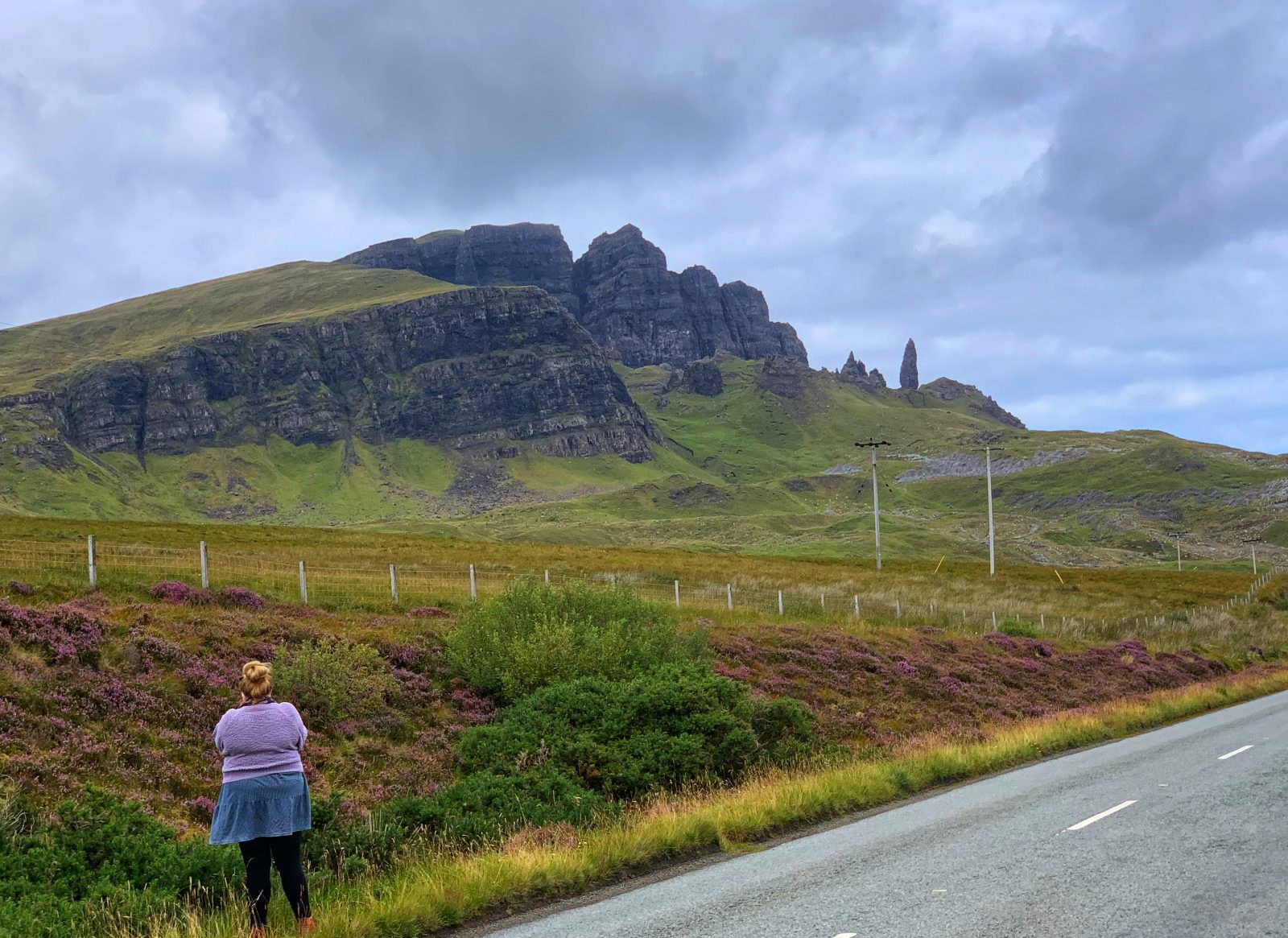 The thing is, there is just so much to see on Skye! Our WOW Scotland tour covered a lot, even the fairy pools, which from what I gather, no other day tour from Inverness covers. The fairy pools are definitely in demand and you need a wee while there as they take a fair while to manoeuvre. Unless you’re me and you plank your backside down at the very bottom away from the crowds to hum in Latin and make up spells like a big ol’ witch. Didn’t do that. Should have though.

Due to that, you’ll have a little less time at some of the iconic spots like the Old Man of Storr and Kilt Rock. You don’t really need much time at Kilt Rock, unless you’re mad into photography. We did get a good 45 minutes at the Quiraing for a pretty sweet picnic. 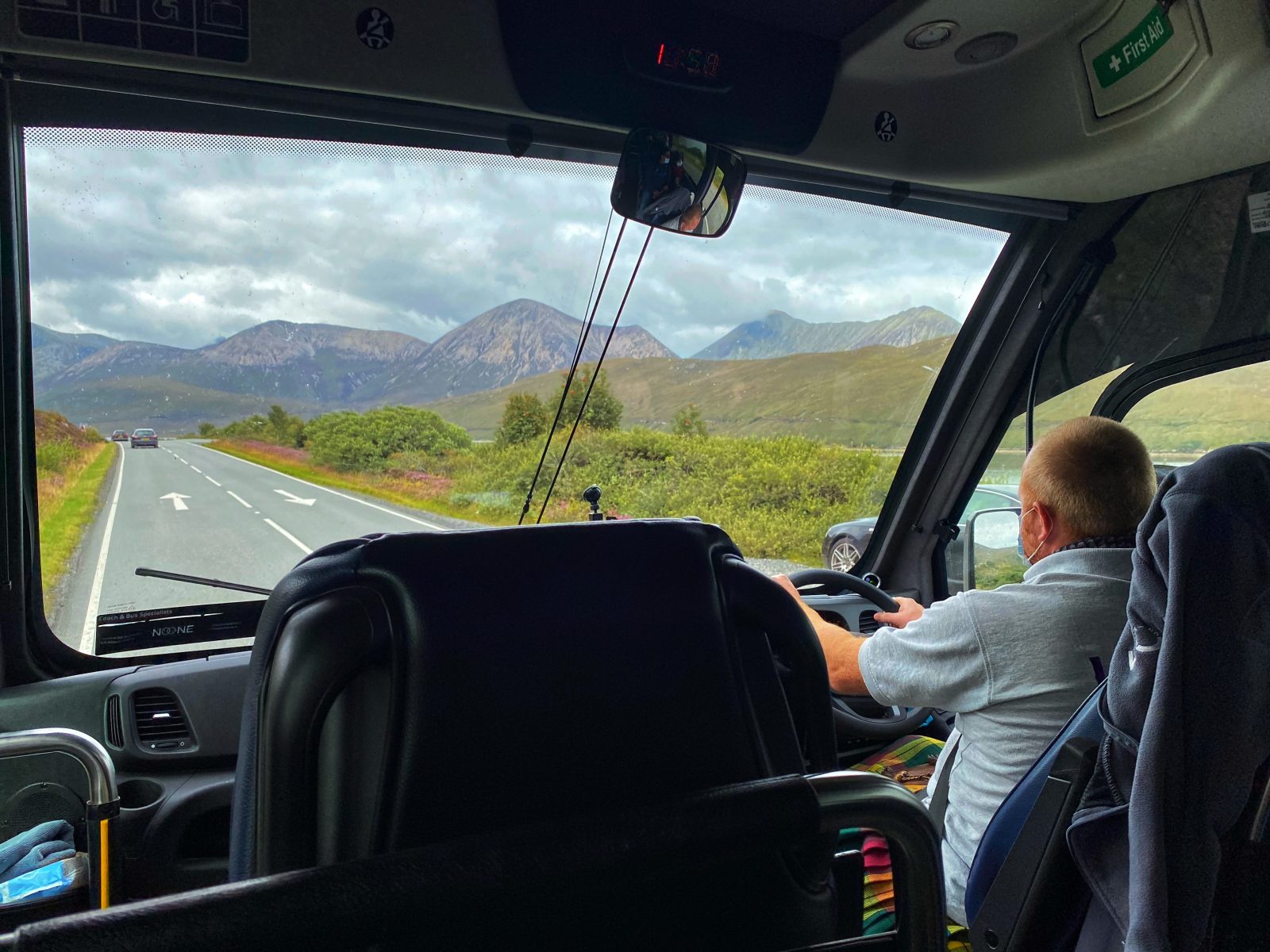 Gordon, our tour guide was a fellow Highlander so I’m instantly biased. His banter wasn’t as good as mine, but it wasn’t all that bad either. He told some pretty epic stories about mad Highlanders just like us, with lashings of Scottish wit.

His stories were broken up with wee tunes, to keep the crowd engaged. He didn’t play the soundtrack to Brave or random repeated bagpipes, but instead, some pretty epic tunes all of which related to his stories in some way. Some were proper Scottish, and some were as random as rice. Bur, all-round decent stuff which was right up my alley and in the back door! 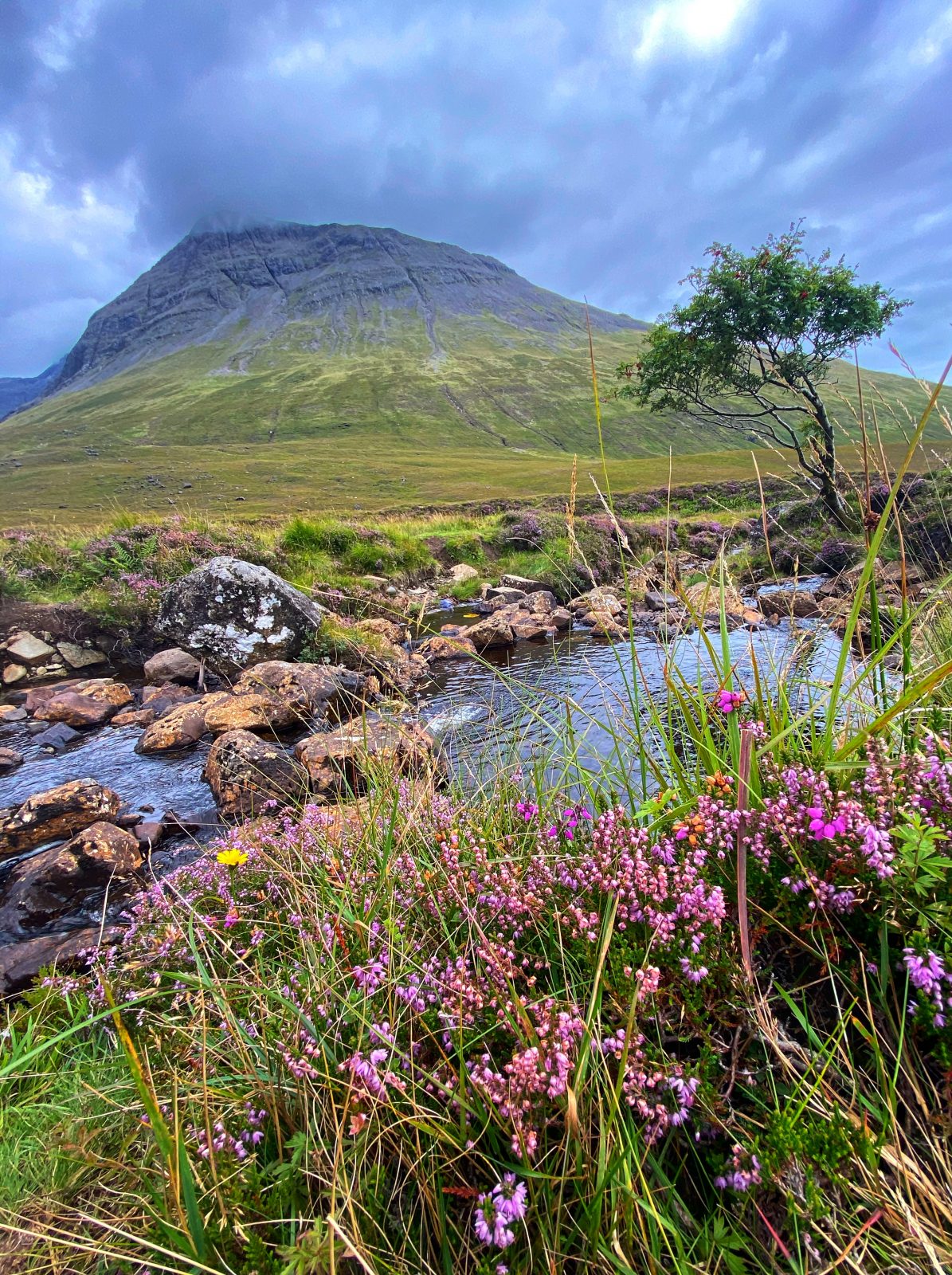 WOW is a cracking wee tour company. The best thing about them is that they are Highlanders through and through. And Highlanders know secrets. They actually know way more than most folk. So if you go on a tour with WOW Scotland, you’re not gonna get run of the mill comedic history, but tales well told by men of old. No offence Gordon.

Another notable point about this tour was that it took the Aye road. Most folk take the low road. We both get to Skye, but WOW’s route is a belter! Even I, a Highland lass, didn’t have a flippin’ clue where this bloke was driving. Yet I trusted the Purple Kermit bus to get me to Skye and back in one piece. And so she did.

Support the Highlands on your Inverness to Skye day tour and book with WOW Scotland.